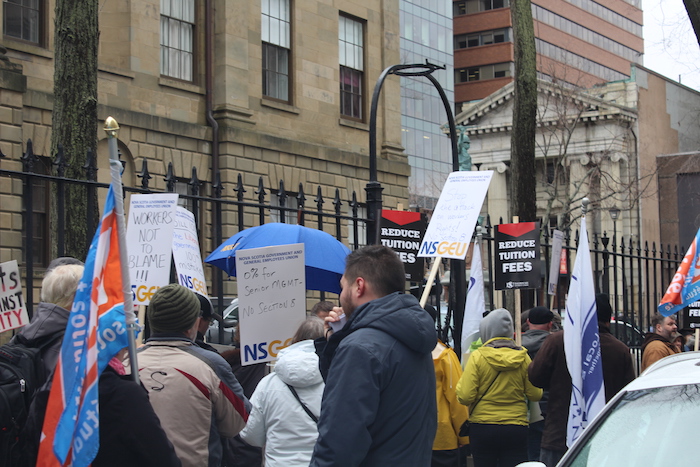 Several people have contacted me recently about the changes the Liberals have made to the provincial dividend tax credit. The short of it: professionals who own their own small businesses in Nova Scotia — architects, accountants, doctors, lawyers, etc. —  are seeing a significant tax increase.

Here’s how the Globe & Mail explained dividend tax credits in 2012:

When you receive a dividend, the money is paid out of the after-tax profits of the corporation. Because the company has already paid some tax, it wouldn’t be fair to ding the shareholder in full a second time, right?

So the taxman came up with an ingenious – albeit confusing – solution: The gross-up and tax credit system. The purpose of this system is to give you “credit” for the tax the corporation has already paid.

Here’s how it works. On your tax return, you are required to gross-up the dividend (for 2012 you would multiply it by 1.38). In effect, what you’re doing is converting your dividend (on which corporate tax was already paid) back to an approximate amount of pretax corporate earnings.

The next step is to figure out how much tax you would theoretically pay on that grossed-up amount, based on your marginal rate. Finally, you would subtract the dividend tax credit, which is intended to compensate you for the tax already paid at the corporate level. The net result is what you would actually pay in tax.

Up until 2006, all dividends were taxed the same. But then the Harper government split dividends into two categories, “eligible” and “ineligible.” Eligible dividends come from large publicly traded corporations, while ineligible dividends are those paid by small businesses established by professionals in order to ply their trade. Typically, the main income of the professional is the dividend payment from their business.

The Liberal budget introduced earlier this month reduced the provincial dividend tax credit from 5.87 percent to 3.5 percent, as of January 1, 2015. PriceWaterhouseCooper shows how the change affects the highest tax bracket:

One account breaks it down for me this way, on dividend income of $50,000:

He notes that professionals running a small business are paying three times the taxes of people living on trust funds.

These are complex issues. While I understand the argument that “taxes have already been paid” on dividend income, I don’t see why it should make any difference in terms of how we tax individuals’ income. It’s fundamentally unfair that people who do no actual work at all but get a dividend cheque from, say, RBC should be taxed at a lower rate than people who actually work for a living.

But what should professionals be taxed? I recently had a conversation with a political operative who related that when the NDP government reduced the tax rate on “small businesses” they were trying to find language that would somehow separate out the mom & pop store from the millionaire lawyers and doctors, but gave up on the notion — in the end, most of the benefit of the tax cut went to the wealthiest among them.

Still and all, it’s worth noting that the Liberal government just increased the tax bill on a professional making $100,000 by about $2,800 over last year.

The Bluenose II was initially supposed to return to the water in summer 2012 after an extensive rebuild with a budget of $14.4 million. The bill for the rebuild has grown to more than $20 million.

Almost three years after it was supposed to be sailing, the schooner sits tied up under wraps in Lunenburg.

At that point, the province stopped paying MHPM the monthly fee and instead started paying it $120 per hour. 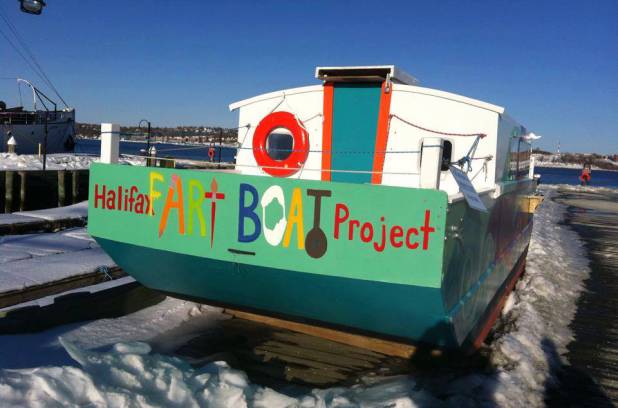 The Art Boat has been turned into the Fart Boat, reports Metro.

Judge Anne Derrick has found R.D. Lingered Services guilty “of one count of violating the Occupational Health and Safety Act and another count of non-compliance with the Canadian Electrical Code” related to the electrocution death of Chris Boyle. From the opinion:

The job Mr. Boyle was working on when he was killed was a subcontract for Suncoast Construction. It involved installing the electrical service for a retail space that was being created for a new tenant in a small strip mall at 201 Chain Lake Drive in the Bayers Lake Industrial Park. Mr. Boyle was at the job site on May 21 with Jonathan Matthews, another Longard electrician, and Joshua Francis, a Nova Scotia Community College student who was on an unpaid work term with Longard. 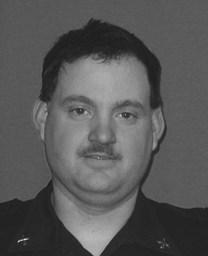 The electrical meters for all the tenants were located in a dedicated electrical room at the mall site. The power came from an outside pole to a large pad-mounted transformer situated outside the building which housed the electric room. The operating voltage of the meter cabinet, also known as a “board”, was 600 volts.

On May 21 Mr. Boyle went to 201 Chain Lake Drive with Mr. Matthews and Mr. Francis to finish tying down an electrical feeder cable for the new electrical service being installed. The three men went into the electrical room to do the work. There is no dispute that Mr. Boyle on this occasion worked on the electrical cabinet while it was live. This explains how he was electrocuted.

When they got to the job site on May 21 in the early afternoon, Mr. Boyle and Mr. Matthews took the face plate off the compartment — “cell” — that needed to be accessed. Because the “cell” was at the bottom of the electrical cabinet, in order to work on it Mr. Boyle lay on the floor mostly on his back with his arms extended into the opening, reaching toward the back of the cabinet where the cable was located. In the back of the board were the “bus bars” which were energized when the system was on. The bus bars were “in very close proximity to one another at the bottom of the Switchboard.”

Mr. Boyle was talking to Mr. Matthews and Mr. Francis when they saw his body suddenly shoot out straight. They shouted his name but he was unresponsive. They pulled him away from the cabinet, and Mr. Matthews put Mr. Boyle in the recovery position and began CPR. He and Mr. Francis did everything they could to save Mr. Boyle as did the paramedics with EHS when they arrived, but it was all to no avail.

The Chronicle Herald relates how Derrick came to her ruling.

Boyle was also the deputy chief at Harrietsfield-Sambro Fire Station, reports the CBC. 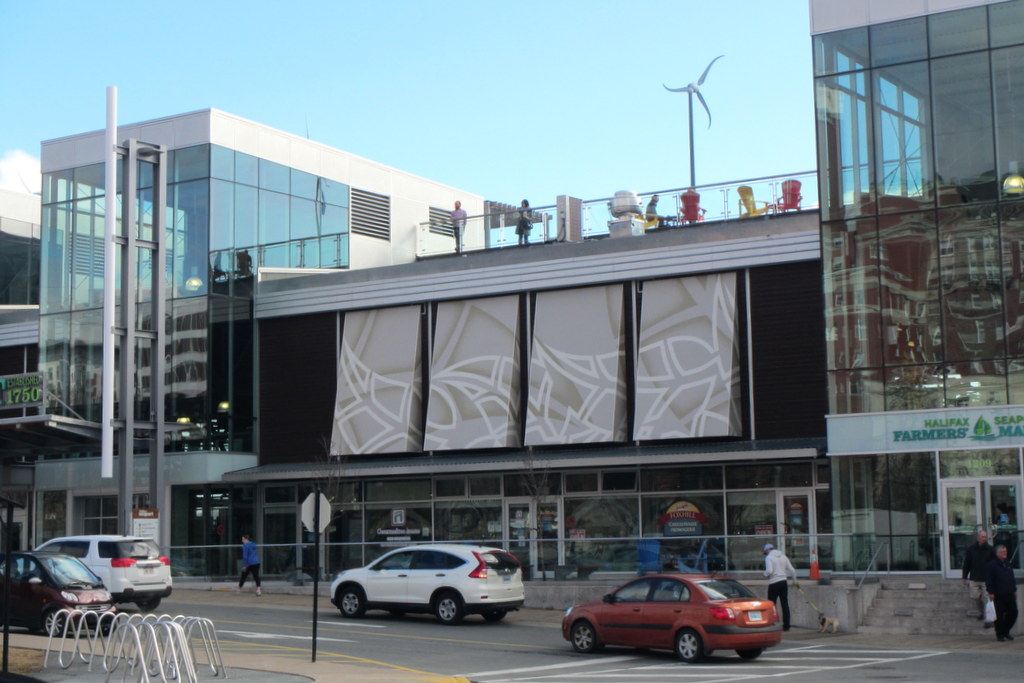 Stephen Archibald goes into critic mode today, slamming the Port Authority for the new awnings it has placed on the Seaport Market: “Maybe I’m missing something but to my eyes the awnings diminish the architecture, without elevating my farmer’s market experience.” 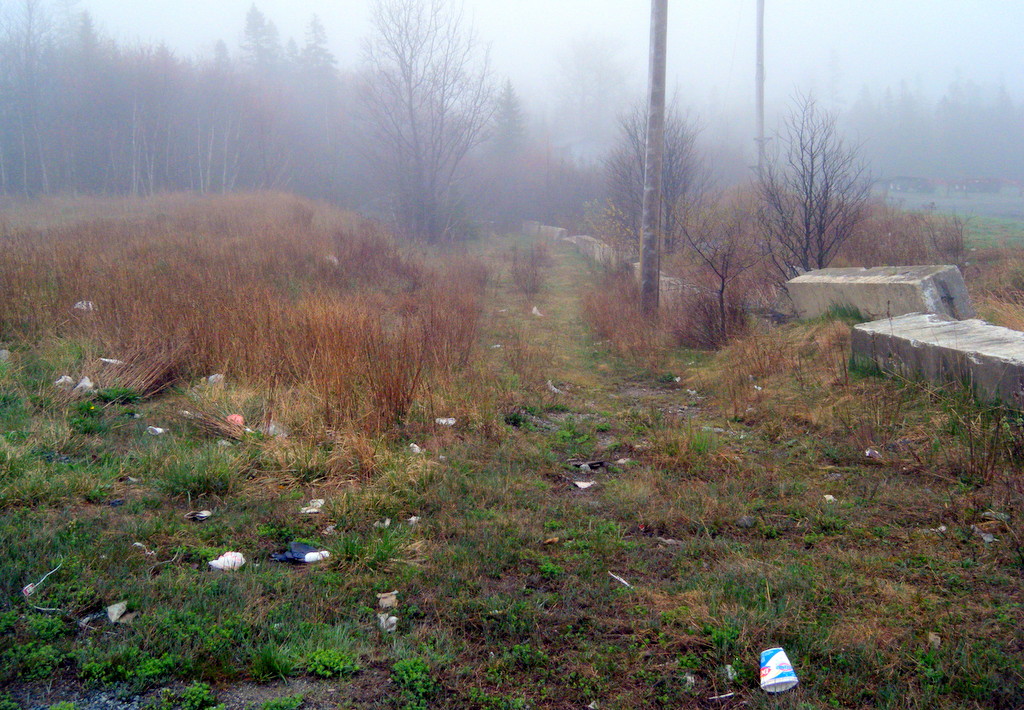 Archibald then goes on to point out the garbage that surrounds Exhibition Park: “The unkempt edges of the site are lined with garbage. Not stuff that has accumulated over the winter — this is heritage material.”

Exhibition Park is managed by Trade Centre Limited, the crown corporation that will soon be renamed the Halifax Convention Centre because that new thing on Argyle Street is going to make us rich! rich! rich! Well, maybe not — if TCL prez Scott Ferguson can’t even get the garbage picked up at Exhibition Park, how can we realistically think he can properly manage the new convention centre?

There’s not much pizza at Pizza Corner, notes John DeMont.

The recent provincial budget came up short by close to 100 million dollars and some unwarranted cuts were made to program spending. This at a time when many millions of dollars in fabricated loans/grants were made to out-of-province companies. One loan/grant comes to mind; the $25 million to Cooke Aquaculture by the Dexter Government.

Earlier, Premier McNeil mentioned about recalling this loan/grant on the basis that the conditions were not met;  i.e., no processing plant in Shelburne, no hatchery in Digby area and no expensive improvments to the feed Mill in Truro. The Premier at the time was “fuming mad” and promised to recall $18 million of the money.

What happened at budget time when all of the “hard” decisions were made?

Premier McNeil knew full well that the majority of the loan/grant monies were spent by Cooke in perusing business decisions in Chile. In fact, the majority of feedlot Atlantic salmon sold in stores since January of this year have come from Cooke operations in Chile. Cold feet Mr. Premier?

The shortage of feedlot Atlantic salmon in NS and NB is a result of disease (ISA) and severe winter conditions. SuperChill totaled the crops in Shelburne, Port Wade and the 2 sites in Jordan Bay in 2015. Time to rethink the feedlot strategy. Time to remove net pens from coastal waters.

City council (10am, City Hall)—council will adopt this year’s budget. I’ll be live-blogging the meeting via the Examiner’s twitter account, @hfxExaminer.

Human Resources (9am, Room 233A, Johnston Building)—appointments to boards and committees.

I’m running late, check back in a bit.

Readers send me all sorts of things, so I’m sorry I forget who drew my attention to this Better Cities article that argues for removing traffic lights in cities:

Last year at the Congress for the New Urbanism, British street designer and “shared space” advocate Ben Hamilton-Baillie urged CNU members to “take out all of the traffic signals in every city in the US — it would be a very simple thing to do.”

Planner Jeff Speck, author of Walkable City and former Director of Design of the National Endowment for the Arts, is a big proponent of removing traffic signals. Cedar Rapids, Iowa, has eliminated many in the last year based on Speck’s downtown revitalization plan. Four-way stops improve traffic flow because automobiles don’t have to come to an extended stop and wait while signals change, Speck points out. For pedestrians, four-way stops are much better—because every automobile has to come to a complete stop and traffic is calmed.

According to the Cedar Rapids Gazette:

Speck said doing away with most of the downtown traffic signals in favor of four-way stops would make for a “dramatic change” to the downtown. Such an arrangement favors pedestrians — “The pedestrian is king” in the setup, he said — and he said motorists will prefer it because they don’t have to idle at traffic signals waiting for lights to change.

Sign me up! Let’s do away with all traffic signals downtown. 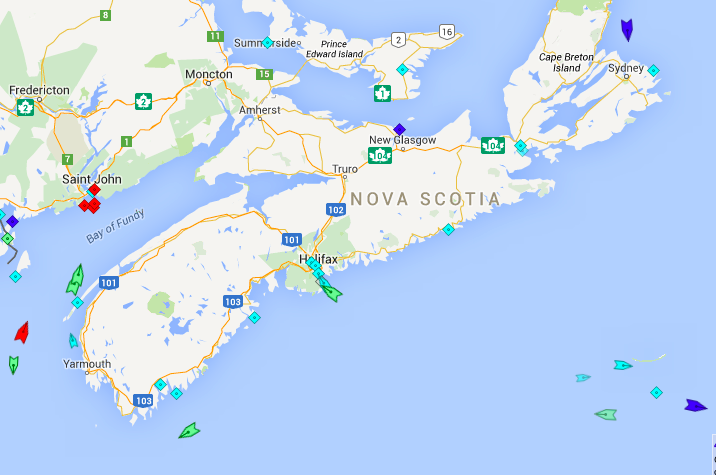 The seas around Nova Scotia, 6am Tuesday. Map; marinetraffic.com