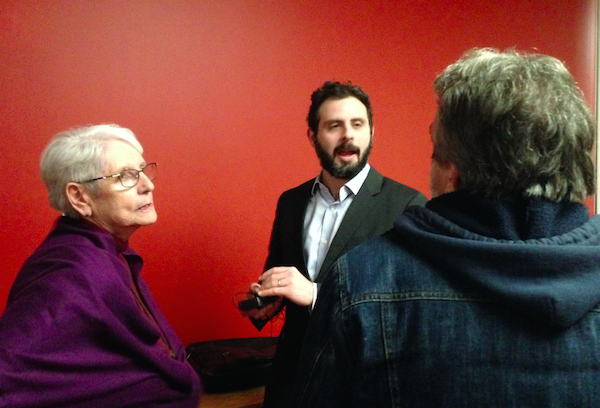 “It’s not the number of short-term rentals in a neighbourhood that affect how people feel about AirBnBs,” a McGill University researcher told a crowd of 120 people at the Central Library last evening. “It’s whether short-term rentals make their own housing situation worse by raising rents or forcing people to move elsewhere.”

Urban planning professor David Wachsmuth is regarded as a leading expert on the impacts of short-term rentals on cities around the world. He claims to have a database compiled of every AirBnB and HomeAway listing in the world, a number that shifts by 15 million each day.

Wachsmuth wowed the crowd at the Central Library with a presentation that pinpointed not only where short-term rentals in Nova Scotia are concentrated — primarily on peninsular Halifax, northwestern Cape Breton, and the Town of Lunenburg UNESCO site — but also whether the accommodation was an entire home or a private room in a house shared with other people. 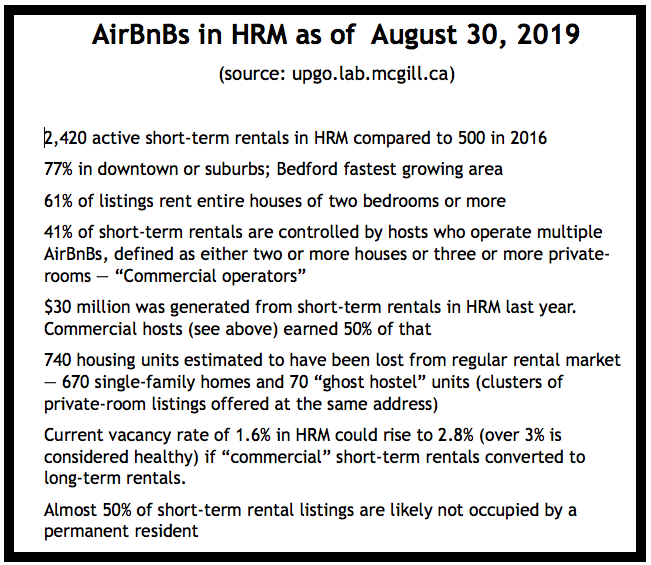 “Halifax currently has a vacancy rate of just 1.6%,” observed Wachsmuth. “A healthy rental market for people looking for housing is generally between 3 and 5%. As of last August, you had 740 homes or apartments in Halifax hosting tourists that could be converted to homes for residents.”

These are what Wachsmuth defines as “commercial operations” where the host rents two or more houses or three or more private rooms. Unlike other cities where most of the activity involves “home sharing” where people rent out space for extra money to help pay the mortgage, Wachsmuth found that in Halifax more than 40% of the short-term rentals involve multiple listings by commercial operators. His data suggest these landlords earned half of the $30 million generated by short-term stays in HRM last year, where the number of accommodations hit 2,420 last August, a 19% increase over the previous year.

The reason is obvious, said Vanessa Scammell, a self-described “proud AirBnB” operator. “You can make more money renting to people for short-term stays than you can with long-term apartment rentals,” said Scammell, a stay-at-home mom with three young children. Scammell said she and her husband have been renting apartments in south-end Halifax since 1995 and have lost money when tenants don’t pay the rent or damage their property. “As an AirBnB operator, the company has insurance that covers the property damage,” said Scammell. “And we find visitors generally more respectful. They’re being reviewed and we’re being reviewed. The money we have made from short-term rentals has allowed us to paint the house on Green Street, something we were unable to do before.”

Scammell said she and her husband have converted half of their long-term rentals to short-term stays. It’s a trend people in parts of north end Halifax are concerned about — last night’s meeting was hosted by a community group called Neighboursspeakup.com — as well as people in downtown neighbourhoods.

“I live in Schmidtville around the corner from Spring Garden Road,” said retired Saint Mary’s University professor Larry Haiven. “In 2017, the median income for people in this historic neighbourhood was $25,500. There were a lot of students. But this fall we noticed there were no students moving in and a lot of people pulling suitcases on wheels. Now when I go out on the street instead of saying ‘Hi’, I say, ‘Huh?’ I worry the neighbourhood may no longer be affordable. We’re not going to solve this by telling my neighbour they’re greedy. It has to be regulated.”

Professor Wachsmuth said while the location of AirBnBs is concentrated on peninsular Halifax, they create a ripple effect by putting pressure on rents and house prices throughout the HRM market. A woman stood up and observed that after 10 years living on Pinecrest Drive in north-end Dartmouth, the rent has suddenly gone up $150 a month. “Forty percent of the people in HRM are renters,” she told the meeting. “People who live on low incomes can’t find another place to live. This is not just a homeowners issue.”

Halifax resident Andrew Murphy suggested too much blame is being placed on short-term rentals for the lack of affordable housing in the city. Murphy noted — and the room seemed to agree — that more housing is needed to keep pace with the rise in population. “Halifax is the hottest it has ever been,” said Murphy, “and we need the jobs for young people that tourism brings. There are 15,000 students who live on the Peninsula during the school year and there’s nothing wrong with renting out their apartments during the summer when they aren’t around.”

That said, the 30-million-dollar question is how to maintain a healthy level of AirBnBs for visitors without eroding the number of available places for people looking to rent year-round. Professor Wachsmuth suggested it’s possible for Halifax to have a “thriving home-sharing market” if the provincial government requires everyone offering short-term rental accommodations to register. Then the province can make appropriate distinctions between people renting a room to make an extra buck (also offering affordable accommodation for travellers on a budget) and commercial operators with multiple listings who could be charged a tax similar to hotels.

Currently, Nova Scotia has no regulations around people making money off short-term rentals. The proposal from the Department of Business is to register only commercial operators by next summer. Wachsmuth said the province needs to make registration mandatory for all operators so it has the information it needs to make appropriate regulation. He admitted there will be a cost, which should be passed through to the visitor and will result in a slight increase in the price of short-term accommodations.

At the present time, the province does not plan to charge fees to people who rent out rooms in the principal residence where they live. But last night’s meeting heard about one example of a large Victorian home in the south end where the owner lives on one floor and converted other floors to rent out as many as five single rooms. At what size should conversions to a residence be regulated?

November 20th is the deadline to respond to provincial consultation on proposed regulations for AirBnbs.

“Regulation is not about wealthy people whining about NIMBY,” said Wachsmuth. “It’s about disruption to neighbourhoods when rent becomes unaffordable and people can be evicted because someone can make a lot more money renting a place part-time than they can full-time. It’s an issue that requires discussion and a political solution.”