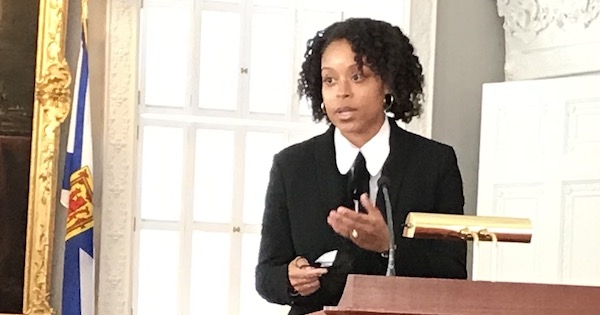 Justice Minister Randy Delorey introduced amendments yesterday to the Land Titles Clarification Act and the HRM Charter that will make it easier for Nova Scotians in five predominantly Black communities to get a mortgage or sell their homes.

For more than 300 years, many African-Nova Scotians have had no clear title to land passed down through generations of families living in North Preston, East Preston, and Cherry Brook/Lake Loon in HRM, and Lincolnville and Sunnyville in Guysborough County.

The issue of unsettled land titles was the subject of the Nova Scotia Community College’s Journalism program’s award-winning project, “untitled: The Legacy of Land in North Preston.” That project brought broader public awareness to the issue, which in turn kickstarted legislative action to resolve it.

The current legislative amendments continue a process begun in 2017 which paid for the cost of land surveys and managed to clear 200 claims — but there are still an estimated 600 disputes outstanding.

“This is a very big deal which for families has been persisting for centuries,” explained lawyer Lauren Grant, the manager for the government’s Land Titles Initiative.

It’s not difficult to imagine the disputes among families over who owns what or where boundaries begin or end. A key amendment to the Act is the establishment of a new $3 million fund to provide financial settlements to people (often within the same family) who have competing interests in the same piece of ground. Those who agree to take their claims to arbitration before one of two commissioners who are both retired judges — Corinne Sparks and Valerie Miller — may be entitled to compensation while avoiding the expense of a lengthy court battle.

“Enshrining the Land Titles Initiative in legislation, investing more resources and clearing the way to settle claims more quickly demonstrates our commitment to addressing systemic racism and righting the wrongs of the past,” Delorey told the Legislature as he introduced the bill.

The amendments to the HRM Charter and Municipal Governance Act will also reduce financial and red tape barriers for about 40 properties in the Prestons and Cherry Brook area that will no longer require the approval of the city to develop subdivisions. They will be granted a legal exemption.

Last but not least, the government is funding a staff position to expedite the land claims process. It has appointed as executive-director Angela Simmonds, a lawyer and tireless champion for the need to clear up confusion surrounding land titles, to work with residents in the five largest black communities. The program is likely to be expanded to include another eight smaller historic African-Nova Scotian communities.

“This new process I believe will bring more faith and trust into the whole process,” said Minister Tony Ince, the minister of African Nova Scotians Affairs. “The fact we have given the process some more money and staff to go into these communities and talk one on one with landowners is, I hope, a step in right direction to build trust and confidence that what we say we are going to do, we are going to do.”