The CBC’s efforts to lift a publication ban related to a report written by a government lawyer reviewing the Glen Assoun case have come to naught, as Justice James Chipman ruled that the publication stand will stand. Assoun is the man convicted of the brutal murder of Brenda Way in 1995. He has always maintained his innocence, and some unspecified “new evidence” has come to the attention of the Criminal Convictions Review Board.

There are important issues at play in this case, and I’ll have more to say about it later today.

David Phillips, Environment Canada’s senior climatologist, tells Metro that this winter will be a warm one:

“We know the water off the coast of Atlantic Canada is like a hot tub out there, it’s two, three, three and a half degrees warmer than it should be for this time of year. It’s huge,” said Phillips. “The early signs of winter can’t come if they’re going to be moderated by this warm water.”

Yesterday morning, someone reported seeing a man carrying a rifle downtown, police responded in force, and huge sections of downtown—including City Hall, the law courts building, Citadel High and Dal’s Sexton Campus—were locked down. Eventually a man was arrested and a gun found on a Metro Transit bus, but the man doesn’t fit the description of the man described as carrying the rifle, and who knows about the gun. No one has actually been charged with anything yet, so it’s hard to say what that was all about.

A partridge hunter spooked someone in Cow Bay, who called the cops. The cops said the hunter wasn’t causing any problems.

Students at Cape Breton Highlands Education Centre-Academy had to stay in the school long past last bell, to 4:30pm, because some hunters were in the nearby woods. The hunters weren’t causing any problems, said the cops, but people are worked up.

Students at New Glasgow Academy were sent home early after the school was locked down because some kid had toenail clippers. “No injuries were reported,” says Metro. 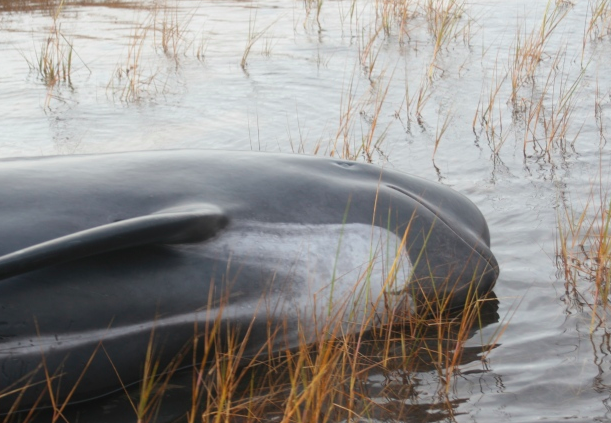 One of the pilot whales, stuck in a marsh. Photo: Marine Animal Response Society

A pod of nine pilot whales got stuck in low, marshy water near Summerside. Most were able to find their way to deep water on their own, but two of the whales were beached and had to be saved by the Marine Animal Response Society.

Will King, a Muslim, says the shootings in Ottawa will probably be used to justify more war, lining rich people’s pockets.

Leonard MacNeil asks why the CBRM is dealing with Communist China. “In my opinion, [Mayor Cecil Clarke] has squandered our money to egotistically improve his image as a politician,” writes MacNeil. “It has not worked.”

STI Research (4pm, Theatre A, Tupper Building)—STI is “sexually transmitted infections.” The promo for this event explains that: 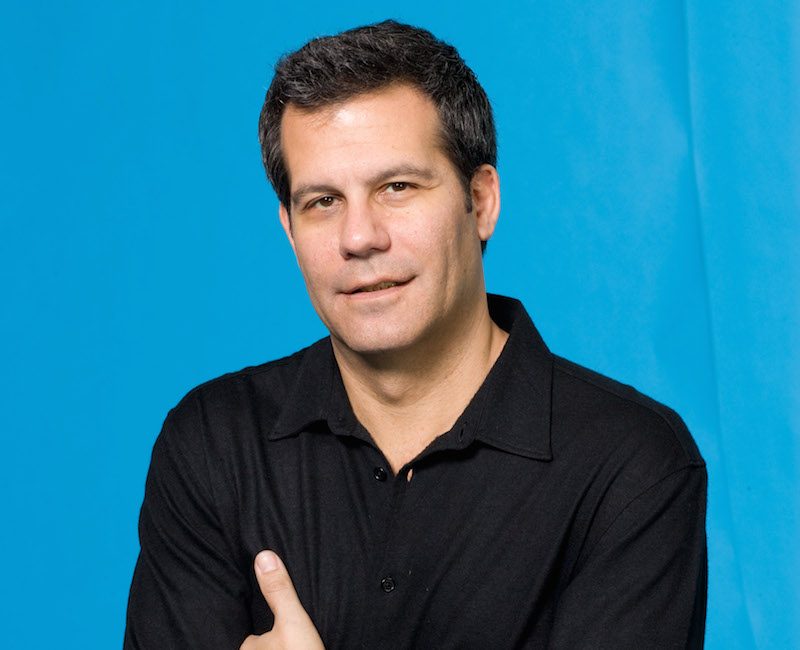 I like living in the city. There’s lots going on, there are lots of different kinds of people to interact with, I can walk or take the bus most places I need to go, there are interesting artistic and musical communities, and so forth. Yeah, city.

But there’s a kind of urban boosterism that annoys me. In the course of my life I’ve lived in big cities, small towns, rural areas, and the suburbs. Each sort of place has its up and down sides, and people decide to live where they live for a whole host of reasons: where they grew up, to be close to family, because there’s work to be found, their own lifestyle preferences, and just plain life circumstances. Wherever I’ve lived there have been good people and bad people, but mostly people are just trying to survive. To each their own. There’s no moral value in living in one sort of place over living in another.

And yet, there’s a strand of urban boosterism that puts issues in moral terms. It’s not enough to say we should build better cities with better transit and parks and so forth. This strand of urban boosterism also needs to cast living in the suburbs as an ethical issue. Suburbanites’ houses are too far apart, therefore we spend too much in tax dollars running a snow plow down their street. They have to drive everywhere, therefore they’re adding to global warming. You’ve heard all the arguments.

There’s a small kernel of truth to some of these arguments, but they don’t wash in a full examination. I don’t know that someone living in the suburbs and commuting 20 kilometres a day to a warehouse job in Burnside is doing any more harm to the environment than someone living in downtown Halifax, walking everywhere, but eating sushi twice a week flown in from Japan and taking multiple international flights as part of their job. To isolate the commute out of the full spectrum of life is unfair.

And for better or worse, people live in the suburbs mainly because that’s what they can afford, and that’s where their jobs are. We’ve created an economy dependent upon consumer spending, and so most of the jobs and most of the tax receipts come from Burnside and Bayers Lake, where most of the workers and most of the shoppers are coming from the suburbs.

Of course we’ve spent the last 50 years neglecting our cities and urban cores, and we subsidized the rapid growth of the suburbs with heavily subsidized highways, tax breaks, land giveaways and more. It’s been bad policy, and a more sensible path should be followed moving forward. But we can’t change this on a dime. We can’t castigate people for making life choices that matched the prevailing economic and social ethic of the time. For example, one aspect of the failed “tax reform” strategy a few years ago was a sense that suburbanites should be punished for living in the suburbs. Never mind that the actual result of the proposed changes would’ve been to increase the taxes of working class homeowners living in densely populated suburbs like Sackville and slashing taxes on the wealthy living in sprawling Kingswood.

I’ve been thinking about these issues lately for a couple of reasons. One, Richard Florida has been interviewed by the Tyee. Florida is a not very bright fellow with a “creative class” schtick that has landed him huge speaking and consulting fees and prompted city governments to spend money on a bunch of stuff that mostly doesn’t work. Anyway, Tyee writer Geoff Dembicki went to hear Florida talk in Vancouver:

[Florida] argued that about one-third of the jobs being created in cities like Vancouver are in creative fields. “They’re really good jobs,” he said. “The baseline of those jobs is now close to six figure incomes.”

That certainly didn’t sound like the “creatives” I know in Vancouver: the musicians, artists, writers, activists, designers and small business owners struggling to make rent in an expensive city seemingly hell bent on squeezing them out.

“If you think about it in comparative historical terms, when we talked about a working class, it was a very broad group of people. There were the skilled workers… who sometimes owned their own companies… and many times made good wages, but they looked down at the large mass of industrial workers… During the Great Depression they decided they were actually part of the same working class, the same group of people who work with their physical labours, and they made one class and they upped the position of all.”

This is why Florida so annoys me: his theories take agency and power away from poor people. Unions were not successful because comparatively wealthy people deigned to come help out the poor factory workers, as a selfless act of charity, I guess. No, factory workers themselves, yep, those ignorant non-creative masses, organized and put their very lives on the line to achieve economic justice. To reframe that as Florida does is insulting, to put it mildly.

After years and years of being criticized for ignoring the poor, Florida finally seems to have a dim understanding that the condition of the poor needs to be addressed, and his solution, such as it is, is that “creatives” are going to help waitresses achieve a better economic position, again, a selfless act of charity. I guess it’s better than nothing.

The other thing that has me thinking about urban boosterism is… well, that’ll have to wait. 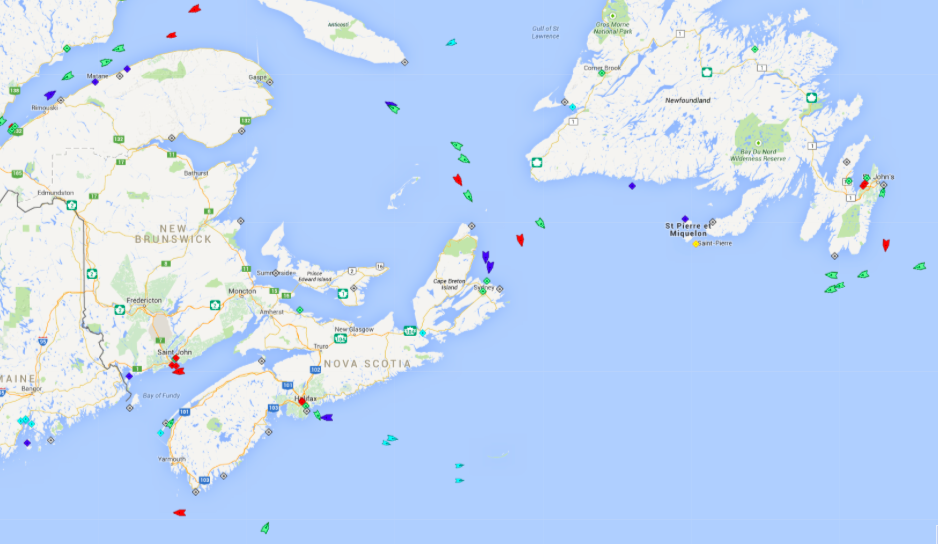 The seas in Atlantic Canada, 5:30am Friday.

Zeelandia to Rotterdam
Regatta to Bar Harbor
Fusion to Saint-Pierre