Battling headlines. From the Chronicle Herald: 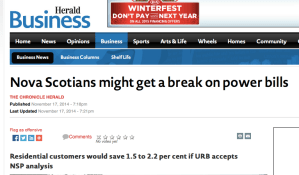 And from the CBC:

At 3:33 a.m., police responded to a report of a single vehicle crash in the 0-100 block of Prince Albert Road. Witnesses reported that a car travelling East on Prince Albert Road hit a power pole and the driver left the scene of the collision on foot. Witnesses provided a description of the driver and he was located shortly after 4 a.m. on Portland Street, on the overpass to Highway 111. The responding officer identified the suspect as an off-duty officer and noted signs of impairment. He was arrested without incident and the subsequent investigation has resulted in charges being laid against 23-year-old Constable Ryan William Morris.

Constable Morris, who has been with the Department for 1 year, is charged with impaired driving and having a blood alcohol level that exceeds the legal limit which is 80 milligrams of alcohol in 100 milliliters of blood (mg%). He is scheduled to appear in Dartmouth Provincial Court on December 23, 2014. Constable Morris has been suspended pending the outcome of this matter.  The investigation into the crash is ongoing and additional charges are anticipated under the Motor Vehicle Act.

And Halifax Regional Police constable Dennis Kelsey is on trial on charges of sexually assaulting a woman in Bedford.

At 6:45 a.m., police responded to a vehicle/pedestrian collision at the intersection of Kempt Road and Young Street. A 39-year-old man crossing Young Street in a marked crosswalk was hit by a car turning left from Kempt Road onto Young Street. He suffered non-life threatening injuries and was transported to hospital by EHS.

A 59-year-old woman was issued a summary offence ticket under section 125(1) of the Motor Vehicle Act for failing to yield to a pedestrian in a crosswalk. This ticket carries a fine of $693.95 and four points on a driver’s license upon conviction.

A police release from Monday afternoon:

No charges have been laid and this collision remains under investigation.

From shift sergeant Rob Lowther’s email to reporters, about an incident Monday evening:

Shortly after 5pm a 13-year-old female was crossing a marked crosswalk on the Herring Cove Road at Cowie Hill in Halifax.  There was a blue car turning left onto the Herring Cove Road from Cowie Hill which struck the victim, knocking her to the ground.  A female exited this vehicle and other witnesses stopped to check on the victim, however the driver of the blue vehicle which struck the victim left the area. There are no better descriptors of the suspect or suspect vehicle.  The victim was treated by EHS but was not taken to hospital. Police are asking anyone who may have witnessed this incident to contact police at 902 490-5020 or Crime Stoppers at 1 800 222-8477(TIPS). 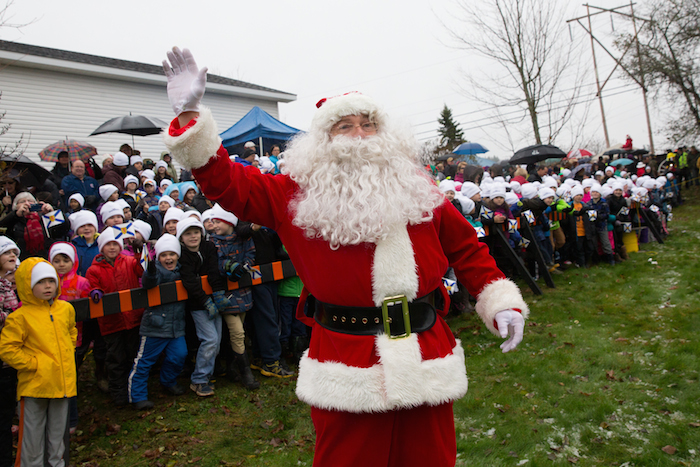 Jesus was on hand in Boston, waiting for the arrival of God’s Tree of Thanks from Nova Scotia. Photo: Nova Scotia Tourism and Christmas Tree promotion

A 55-year-old, 13-metre white spruce from the farm of John and Ethel Ann MacPherson in Purlbrook was sawed down, wrapped in burlap, and trucked to Boston yesterday. This loss of a maybe a few tonnes worth of a greenhouse gas sink was putatively done in the name of “thanking Boston” for the help the city provided to Halifax in the immediate aftermath of the Explosion. We all know better.

The originally gifted tree, in 1918, appears to have been an honest expression of thanks, from a city still reeling with the horrid and sudden loss of so many citizens. The expense of finding, cutting, and shipping a suitable tree when the city faced the enormous costs of rebuilding speaks to the importance of the gesture. But thanks given, that was it. It wast until 1971 that the Lunenburg County Christmas Tree Association “revived” the “tradition.” I can find n record of any fatalities among Lenenburg Christmas trees from the Explosion, but no matter, why let that get in the way of promoting business? A few years later, the province took over the “tradition,” to promote tourism.

By 1971 most of the Explosion survivors had died, which is probably just as well. Packaging tourism and Christmas tree promotion on the backs of a couple of thousand dead people strikes a wrong note.

Of course advertising is an unavoidable reality in this Age of Unfettered Capitalism. But it’s especially annoying when it’s wrapped in false piety and manufactured sentimentality. 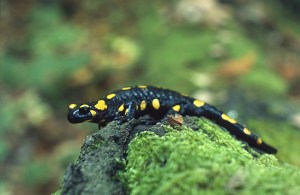 ➡ A newly-discovered disease-causing fungus is threatening salamander populations around the world, including the 190 species in North America, says healthywildlife.ca. The fungus is called Batrachochytrium salamandrivorans, and “has caused global conservation alarm because another related fungus, B. dendrobatidis, has been spread around the world through commercial trade in amphibians and has caused the extinction of 200 or more species of tropical frogs.” 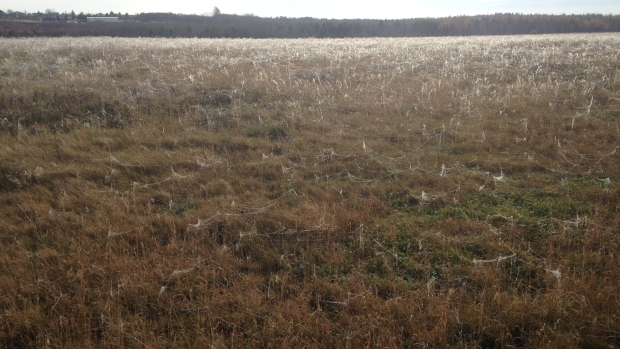 ➡ Millions of spiders converged on a field near a Cape Breton hiking trail visited by Allen McCormick. The CBC explains:

Prof. Rob Bennett may have the answers though; he’s an expert on spiders who works at the Royal British Columbia Museum in Victoria.

The little spiders are one or two millimetres long.

“For some reason, mostly unknown, these types of spiders are known to do these mass dispersal events. The spiders decide collectively that it’s time to leave that area.”

Bennett said the spiders do that by casting a web net to catch the wind and float away in a process known as ballooning.

➡ Someone put six puppies in a garbage bag and threw them in a ditch, in Sydney. The dogs, which still had their umbilical cords attached, were discovered by two teenage girls, and five of the puppies have survived, CTV reports:

Unknown to the girls, the road where the puppies were found is well-known for illegal dumping.

“There was two puppies in the beginning and then you open another bag and there’s four puppies lined up and one was dead,” says [neighbour Taylor] MacKenzie.

➡ The Ecology Action Centre is criticizing the International Commission for the Conservation of Atlantic Tunas for not giving protection to the porbeagle shark. I’ll have more on the tuna conference, tomorrow.

Garretts By The Bridge was torn down last week. Garrretts was an antique store that, as its name implies, was by the George Street Bridge in New Glasgow. “But I believe they may have sold sporting goods and musical instruments,” writes Stephen Archibald. “Ask someone from New Glasgow.”

Archibald’s concern, however, isn’t with the antique and possibly sporting good/musical instrument store, but rather with the Garrett family’s predecessor business, Garretts Hooked Rugs, which made the patterns for hooked rugs and operated in the building from the 1890s to the 1970s. 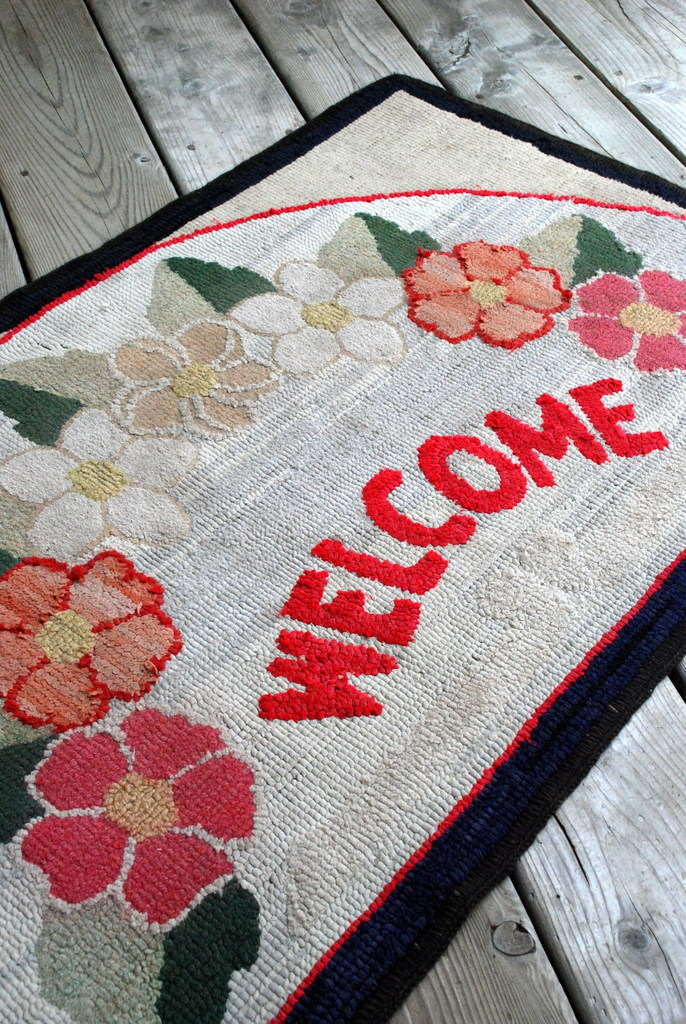 “Hundreds of thousands of these patterns, printed on burlap, were sold around the world,” writes Archibald. “There were dozens of designs; popular ones included schooner Bluenose and the Three Little Bears (not together). This welcome mat is a Garrett design. The design was printed and the hooker could use whatever colours they fancied.  The hooking was usually done with rags cut into strips.”

Archibald has so much more to say about hookers, and has a great story about stumbling upon some hooked mats with Garrett designs on fishing boats in Port Bickerton, back in the 1970s. Read the whole thing.

Consider this. Twenty of her colleagues at the Chronicle Herald—some of the very best reporters in town, doing award-winning work— have received layoff notices, so what does Jan Wong, columnist extraordinaire and journalism prof (!) write about? Her vacuum cleaner.

Graham Steele contrasts the Liberals’ highly controlled passage of Bill 1 with their mismanagement of Bill 60.

Here’s all you need to know to understand the real estate market is about to collapse: Roger Taylor says everything is fine.

I think it was Paul Krugman who said you don’t get to be considered right if you’re always predicting a market collapse, because one will invariably come around sooner or later. Broken clock and all that. Fair enough. But Taylor, quoting real estate agent Al Demings, makes the opposite mistake, saying a collapse can never happen.

In his 36 years in the real estate business, Demings says, Halifax has been a relatively steady market, and rarely has there been a rollback in prices.

“This is one of those few times, but within a year or two it always comes back, and I don’t think this is any exception.”

Wendy Elliot says back in the 70s she participated in something called purple Jesus parties. Somehow, thankfully, even with a lifetime of booze, I had never heard of such a thing and had to consult the urban dictionary. Talk about alcohol abuse.

City council (10am, City Hall)—yesterday, I published a council preview. That article is behind the Examiner pay wall and so available only to paid subscribers. To purchase a subscription, click here. I’ll be live-blogging the meeting via the Examiner’s twitter account, @hfxExaminer.

Great Lakes (11:30am, Room 3655, Life Science Centre, Oceanography Wing)—Ralph Smith, from the University of Waterloo, will speak on “Biological oceanography of the Great Lakes: Problems with phytoplankton.”

STI screening (Wednesday, 10am–3:30pm, Room 224, Student Union Building)—”A group of students from the health promotion class HPRO:3335 Introduction to Disease Prevention will be hosting a free chlamydia and gonorrhea screening clinic. Due to screening techniques this clinic is only open to women who are attending or who are employed by Dalhousie University – please bring your official health card or if you are an international student please bring your Dalcard.”

Film screening: Big Sur (Wednesday, 8pm, Dalhousie Art Gallery)—Michael Polish’s 2013 film “tracks Kerouac’s retreat to a cabin near the California Shore near the end of the Beat era, with music by members of The National.”

Dalhousie’s student-owned radio station, CKDU at 88.1 FM, is now in the midst of its fundraising drive. My friend Russell Gragg, chair of the station’s board, has this to say:

CKDU has existed as an alternative media outlet in Halifax for 30 years on the FM dial and for almost 70 years on the Dalhousie campus.

In those years it has steadfastly remained a voice for the community—indeed, any Haligonian with an interest in radio can be a part of its programming. It airs minimal advertising (the CRTC allows four-minutes-per-hour for campus-based community stations. In practice, CKDU probably uses one-fifth of that), and what it does air is for local businesses. No Ford, Coca-Cola or Scotiabank ads are heard. CKDU is the home of not only local music, but programming for women, the LGBTQ communities and third-language programming for our growing immigrant communities.

As well, CKDU has partnered closely with the University of Kings College Journalism program, giving many fledgling young journalists their first taste of writing, reporting, and recording for news radio.

Back in my day, college radio was the go-to place to find new and exciting music. It still serves that purpose, although perhaps in something of a diminished role due to the internet. But CKDU has transitioned nicely into the “community radio” model found primarily in the states: locally owned and operated non-profit stations, not chained to the commercial or (in some ways worse) NPR behemoths. My old stomping grounds in Chico, California is home to a wonderful community radio station, KZFR, and I’m glad to see CKDU rising to the challenge, with similar political affairs programming and the like. Please consider dropping a few coins their direction, and help keep this valuable local resource afloat. 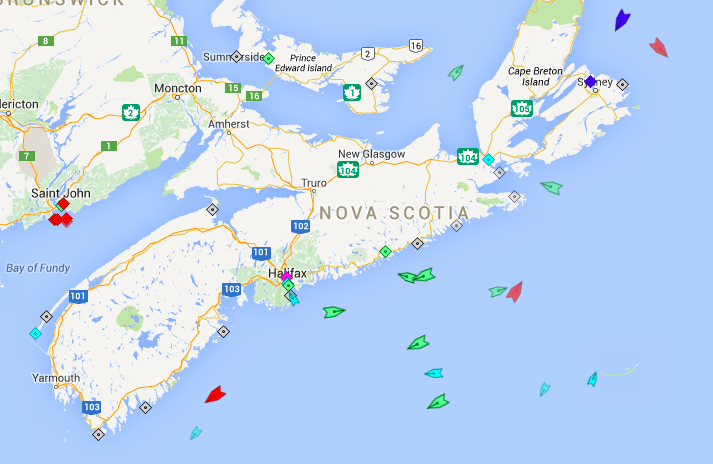 The seas around Nova Scotia, 4:30am Tuesday. Map: marinetraffic.com

That was one hell of a storm last night, no?