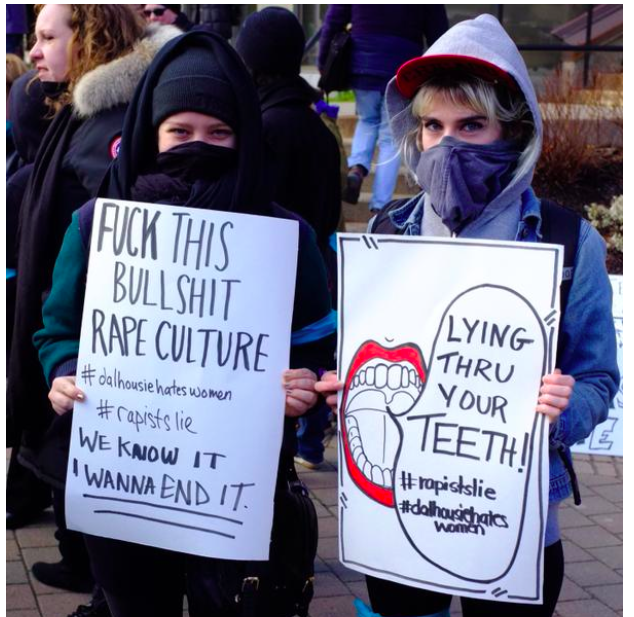 Pratt & Whitney Canada is planning a $67-million investment at its facility in Enfield to build new centres of excellence for intelligent manufacturing.

Pratt & Whitney Canada established its Enfield facility in 1985 and this investment demonstrates the company’s commitment to continued growth in Nova Scotia.

The project includes creating centres of excellence that will enhance and expand the technologies and manufacturing processes  for the company’s integrally bladed fans used in the new PurePower PW800 engine family. The turbine engine blades manufacturing line will also be modernized.

The company’s investment will span the next six years. It can earn up to 20 per cent of its investment back from the province during that time. The provincial capital rebate is an earned incentive, paid after the company invests.

You have to get all the way down to paragraph five of the press release to get to the relative information, and even then it’s cryptic. But that 20 percent is $13.4 million in tax relief given to the company.

Is this so bad? Well, consider that just last week the federal government announced it is giving Pratt & Whitney Canada $300 million for plants in Mississauga, Ontario and Longueuil, Quebec.

I’m going to drop out of character here and quote Mark Milke, of the Fraser Institute, from 2011:

Perhaps no better example exists than the money granted and loaned to Pratt & Whitney Canada. Since 1967, that company has been the largest corporate welfare recipient. Its own website lists $1.5-billion from one Industry Canada program, the now defunct Technologies Partnerships Canada (TPC). The company notes its repayment record is $371-million, or about 25%.

Those figures do not include other federal or provincial money given or granted over the decades. It excludes, for example, a December 2010 authorization from another Industry Canada program of up to $300-million.

Regardless of Pratt & Whitney’s exact take, it’s clear recipients and politicians chatter about jobs only when convenient — at press conferences.

A May 2005 news release from the Quebec government announced $75-million to Pratt & Whitney for new engines. The province claimed the money would “help consolidate 280 R&D jobs and create some 300 production-related jobs in Quebec.” In April this year, Ontario trumpeted a $13.9-million taxpayer grant with this justification: It would help Pratt & Whitney “bring new products to market while creating 80 new jobs and supporting 49 existing jobs.”

However, in the company’s response to an Access to Information request (via Industry Canada), one that requested the actual number of jobs created from all that post-1960s taxpayer funding, the company refused to release any estimates. In a follow-up request sent directly to Pratt & Whitney last week, no response was given, not on updated and more comprehensive numbers on government grants, loans and repayments, or on the jobs estimate.

Some historical employment numbers might explain why. Pratt & Whitney Canada’s website notes 6,200 employees in Canada and plans to hire 200 engineers.

That’s positive, but back in 2001 in testimony before Parliament, the company’s president said Pratt & Whitney employed 7,000 people in Canada. So even with another 200 employees, the company will still employ fewer people than 10 years and many subsidies ago.

Pratt & Whitney is a division of United Technologies Corp., which last year pulled in $17.4 billion in profit. The company has so much cash just sitting around that it is using the cash to buy back stocks, so the share price is zooming upwards.

Under Chenevert, United Technologies reigned as arguably the most profitable conglomerate in America. Its cash return on total assets last year was 11.4%, far better than General Electric’s 8.2%. During Chenevert’s time at the top, he’s delivered an 84% total return to shareholders, about 20 points better than the S&P 500.

Chenvert never stopped pushing his business heads to achieve the near-impossible. Early this year, the buildings systems unit, which accounts for more than half the company’s sales, pledged to lift revenues from $29 billion to $50 billion by 2020, and raise margins by over 4 points to 20%. Getting there requires an epic 8%-a-year growth rate in sales, and an even faster increase in earnings. That 8% is more than twice the rate of projected global expansion in GDP. But that’s what the boss wanted.

So one possibility is that Chenevert’s goals exceeded what the board believes are achievable. In fact, United Technologies already downgraded its expectations for this year’s EPS growth. Another possibility is that the directors advocated splitting the aircraft engine and building services businesses. The former is the less profitable of the two. At United’s engine-maker Pratt & Whitney, operating margins stand at 12.9%. Sikorsky, the company’s helicopter unit, which has suffered from cutbacks in defense spending, earns just 9.5%. By contrast, buildings systems—consisting of Otis, as well as Carrier HVAC products—boasted margins of 15.7% for 2013. The idea is that an independent building systems company would merit a premium multiple and a split would provide big gains to shareholders.

Translation: Chenevert wanted to increase profits the old fashioned way, by selling stuff, but the United Technologies board was happy with looting the company and selling off its parts, for profits.

This is the story of the global economy post-2008. Corporations are cash-flush, and because sales are flat, they’re not re-investing that cash back into operations to increase production, but are rather simply paying it out in dividends to share holders and buying back stock, both of which cause share prices to increase at record rates. And the increase in share prices is used as justification to increase CEO salaries.

Looked at in this context, Nova Scotia’s $13.4 million is a simple transfer from taxpayers to the owners of United Technologies, period. The very best defence of the subsidy is “well, if we didn’t do it, someone else would, and we’d be out of those extra jobs.” That’s a very debatable point, but even if true, we’re playing a suckers’ game: Who’s the biggest sucker? This round, we are.

Yesterday’s second announcement of corporate subsidies came via Nova Scotia Business, Inc, which announced a $6.5 million payroll rebate deal for Lockheed Martin, which supposedly will “create” 70 jobs. (As I’ve long maintained, corporations and government subsidies don’t create jobs—customers create jobs.) In case you’re wondering, Lockheed Martin had about $3 billion in profit last year, it is sitting on record amounts of cash, and so its stock price has more than doubled in the last five years and therefore CEO Marillyn Hewson was paid $25 million last year. 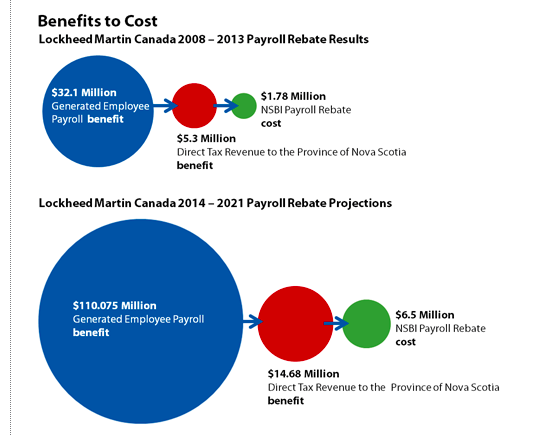 That’s a nice little game they’re playing there. Let’s play it with your small business. Calculate your total payroll, and then what you pay in taxes to the province, and then the amount you get back in payroll rebates from the province. Wait, what? You don’t get back payroll rebates? OK, so no green bubble at all there, eh? Sucker!

This is what the whole payroll rebate program is about: it rewards companies that are big, simply for being big, while the rest of us (yes, I own a business and pay payroll taxes) get no special deals. But it’s shown time over time that small businesses are the engine of local economies, generally have higher payroll costs as a percentage of sales and, more to the point, aren’t sitting on suitcases of cash. Small businesses reinvest much of their profits; big corporations pay it out to shareholders.

Further, because it is administered by an unelected cabal of people at NSBI, the payroll rebate program amounts to an end-run around the tax code, which was created by the democratically elected legislature.

I somehow missed it, but earlier this week the Thiels lost their lawsuit over the Nova Centre. The family sent out the following press release yesterday:

HALIFAX – Wolfgang Thiel of the Thiel Group of Companies issued the following statement in response to Wednesday’s decision issued by Judge Frank Edwards of the Nova Scotia Supreme Court on its legal action against the provincial government:

“There have been two judges review our case to ensure there is fair treatment for all commercial developers in the future.  The first judge allowed our case to proceed, rejecting a request from the provincial government to dismiss our claim.  The second judge has sided with the provincial government in its decision yesterday – a decision with which we are very disappointed.

“We will now take the time to review with our legal counsel the details of Justice Edwards’s ruling and consider what next steps we will be taking – including an appeal – to protect the rights of all commercial developers to play by the same set of rules, without special concessions.  Until we make that decision, it would not be appropriate to speak about specific aspects of the decision or the case.”

The driver of the bus that hit a woman in a crosswalk near the Portland Hills bus terminal yesterday morning has been charged with failing to yield to a pedestrian in a crosswalk, which carries a $693.95 fine.

I’m concerned for this fellow. I think he needs alcohol injections into the facial nerve, facial nerve avulsion, neurotomy, and neurectomy. 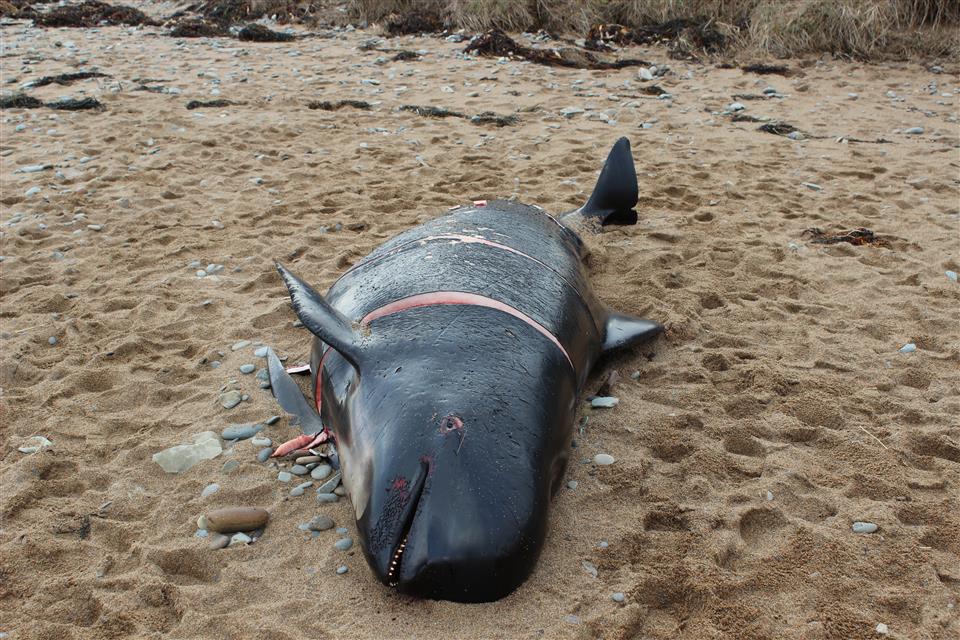 Whale: The carcass of a 10-foot pilot whale has washed up on Green Bay Beach.

Puppies: “A litter of ten newborn puppies was found abandoned under a deck and brought to the Dartmouth location; another nine puppies and their mother were surrendered by their owner in Cape Breton,” reports the CBC. In case arithmetic isn’t your strong point, the ceeb adds that “in total, 19 puppies have been dropped off in the last week.”

Lezlie Lowe says that “restorative justice is a level-headed approach to rehabilitation and redress” to participants in the “Class of DDS 2015 Gentlemen” Facebook page.

2. An affront to Dal’s feminist pioneers

“It would be a fitting and noble memorial for Dalhousie University to raise a fine statue of Lucy Maud Montgomery overlooking the Forrest Building,” writes Allan M. Doyle. “Montgomery’s eyes would forever watch over and embrace all who enter Dalhousie’s temporarily tarnished dentistry school. It would be a statue to look up to for all generations of students to come.”

I have read a lot of comments today, mostly negative, from the usual “hate everything/tax watcher”crowd,” writes Jeff Nielsen. “MEH”:

So much money is blown around here (Looking at you, Nova Centre and Bluenose II money pits) that 25 K is basically peanuts. I think there is an opportunity for this to benefit the community and I’ll explain below. Some valid concerns are brought up but it’s mostly just predictable noise. 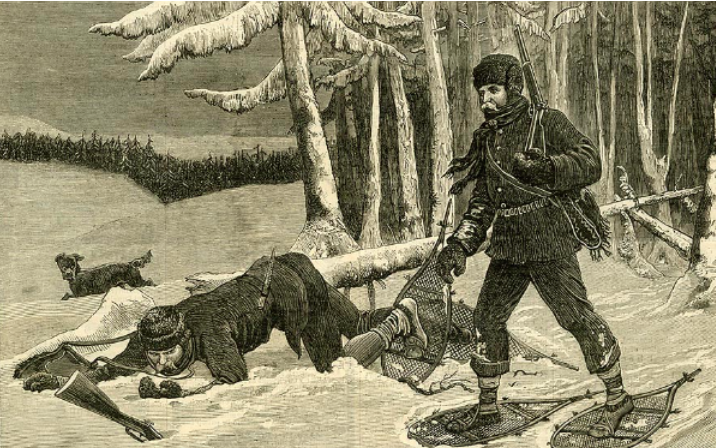 ”Christmas-time in Nova Scotia”, illustrations published in Harper’s Weekly (New York), 10 January 1880, back in the old days when it snowed in December in Nova Scotia. It is labeled ”Hold Up! Mind the Twigs!” 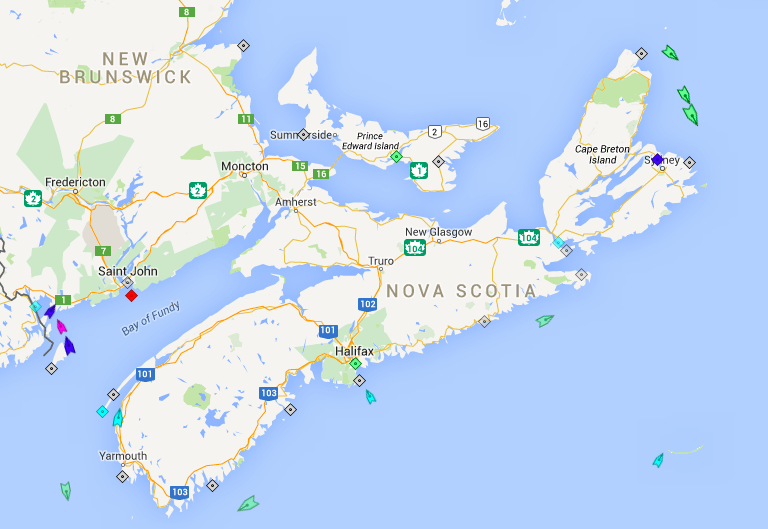 The seas around Nova Scotia, 8am Saturday. Map: marintraffic.com