You are here: Home / Featured / A strange kind of normal: getting tested for COVID-19 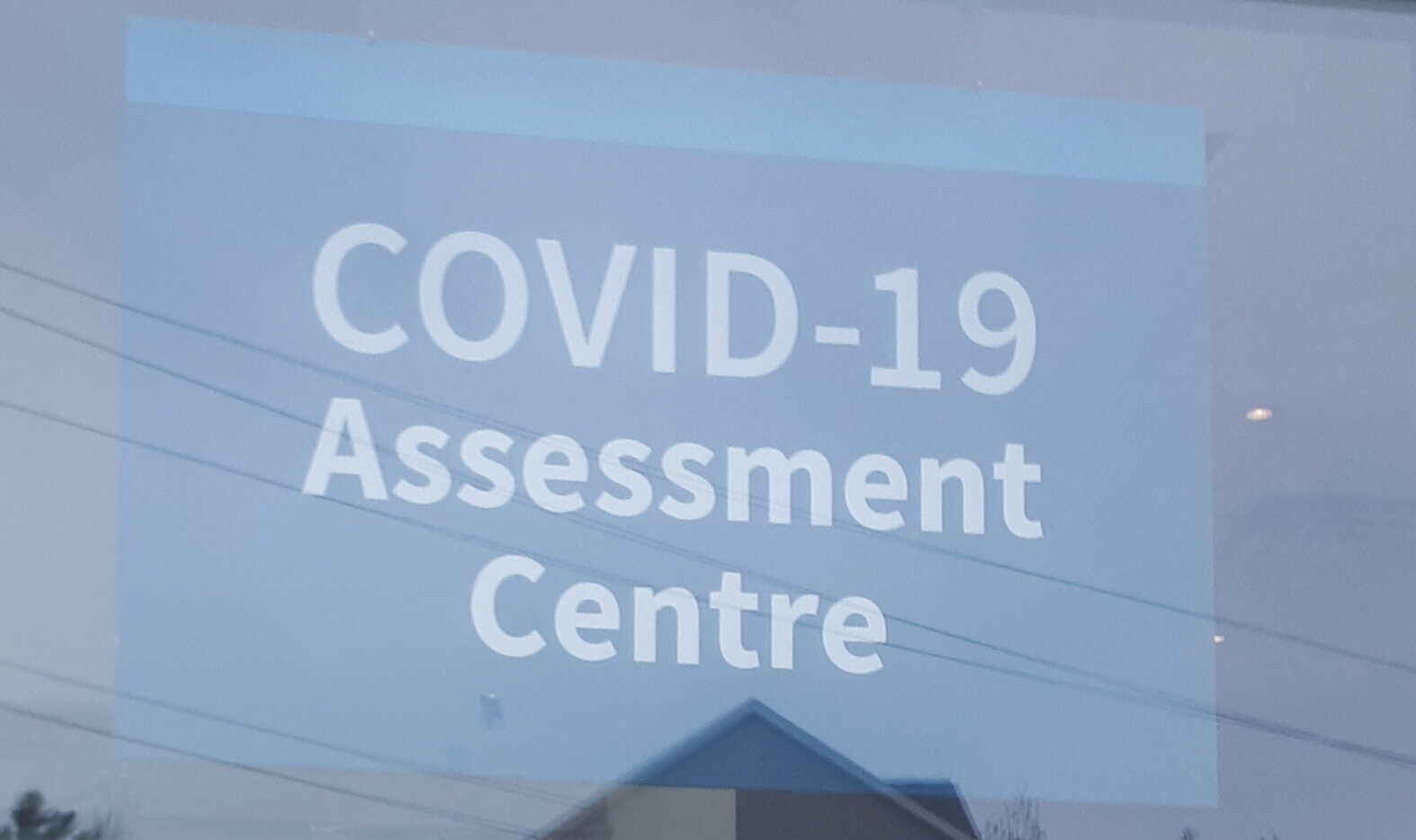 “Tilt your head back,” the nurse says.

Her name is Belinda. She is warm, friendly, and reassuring — and she is about to stick a swab that looks like an enormous flexible Q-tip far up my nose.

“If you need to cough,” Belinda says, “turn your head towards the wall.” I’m wearing a mask, and so is she, along with a face shield, and protective equipment covering her body. She’s not taking any chances.

Which makes sense, considering I’m here for a COVID-19 test.

At first, I just figured I was tired.

I haven’t been sleeping well. Who has, during the pandemic? I insist on going to bed too late and waking up too early — a result of early daylight, pets being jerks in the night, and the general anxiety that grips me early in the morning, waking me up but also pressing me down, so I feel like I can’t get out of bed.

I started having headaches. Probably just the fatigue, I figured.

Then, I got the sniffles. That dry cough I’d had for ages, the one probably caused by my medication — was that getting worse? And what was that slight difficulty swallowing? Was it a tickle in my throat? A nascent sore throat? Or was it an all-out sore throat I was underplaying in an effort to fool myself?

I thought of New York Times science writer Donald G. McNeil Jr.. On February 27, he appeared on the Times podcast The Daily, and with reference to the novel coronavirus, said, “I spend a lot of time thinking about whether I’m being too alarmist or whether I’m being not alarmist enough.”

I was feeling a tiny version of the same thing. “This is pretty obviously nothing” vs “Oh my God, what if I’ve got it?”

So I went to the Province of Nova Scotia’s “When to seek help” web page.

The criteria for being tested have loosened up. Now, the province says to call 811 if you have any one of the following symptoms:

As a few people have jokingly noted, many of us typically have some or all of these symptoms. Even though the guidance said to call, I still felt foolish. Hi, I have a headache. Really?

But that’s one of the sneaky things about COVID-19: so many symptoms, so many outcomes. I spend most of my days at home, and it would have been easy to just ride it out and see if things got worse before calling for a test. But I also wanted to go shopping for a new bike, I had an appointment coming up for blood work, and I didn’t want to risk infecting anyone else if I was positive.

Joanne Bealy, who lives in Halifax, started feeling bad around the same time as me.

“This time of year is really hard,” she said in an interview. She was sneezing (probably from allergies, but still…), felt chills, was dizzy, “and then I looked at 811 online and had every symptom there.”

When I called 811 I felt kind of silly. Yeah, I have a bit of a cough, but I’ve had it a long time. Yes, I have a runny nose, but it’s not really bad. I have a headache, but I might just be tired.

“Psychologically or something, even though I called about getting a test, I tried to talk them out of giving me the test,” Bealy said. “When I was answering their questions I’d say yes, but I’ve had that before. And they said, OK, you’ve said yes enough we’re going to send you for the test.”

I tip my head back. Belinda tells me to breathe deeply. Focus on the breath. Deep breath in, deep breath out.

Keep focusing on your breath, she repeats as she starts feeding the swab up through my nose into the passages behind it.

It stings. I keep breathing. It hurts more. I breathe faster.

I feel a small explosion go off in my brain. And then it’s over.

I drove myself to my COVID test. Bealy lives within walking distance of an assessment site, but because she “felt like shit” she told the public health nurse who set up her appointment that she’d get a lift.

The nurse was not on board with that plan, Bealy recalled:

They said, no, no, no. We’ll send you a car at 2:00 for your 2:30 appointment… At six o’clock that night, someone from the health authority dropped a mask in my mailbox. The next day I got a text from [a cab company] saying they were on their way, and I thought, that’s weird, I didn’t order a cab. The cab shows up at 20 to two and sits outside. And I went out and said I hadn’t ordered a cab. And I could tell he was being very circumspect. He said,  you’re going for a test, right? He said, don’t worry about me, come out at 2:00.

NSHA [the Nova Scotia Health Authority] apparently has a list of who will pick up people who need a ride to get tested, and this cab driver told me he was on the list. He had plastic up between the front and back seats, and his mask on. There was no exchange of money.

I was curious about the taxi, so I contacted the health authority. You’re not supposed to get a ride, but they send someone to give you a ride?

Spokesperson Carla Adams got back to me with this statement:

As part of our response to COVID-19 and to ensure the disease is contained, NSHA’s Public Health has arranged transportation for some people who need COVID-19 testing and may not have a way to access without the help of another person or public transportation.

Across the province, Public Health has partnered with local cab companies to provide this service.

Drivers doing this work are taking necessary precautions to prevent the spread of COVID-19, such as regular disinfecting after each passenger, wearing a face mask, cleaning hands often, etc.

Having this arrangement means we can support people to access COVID-19 testing and care, which helps us identify cases and also contain the spread of the disease.

Adams also encouraged me to not name any specific companies, for fear that customers might avoid their cabs if they knew they had been used to transport people going for COVID-19 tests. That seemed reasonable to me, which is why I removed the name of the company from Bealy’s quote above. (A call to the taxi company that transported her was not returned.)

Bealy said that after her test, “I came downstairs, there was my ride, he took me home, and that was that.”

As I write this, 45,466 Nova Scotians have been tested for COVID-19. Of those, 1,059 tested positive. While the prospect of coming down with COVID-19 can be terrifying — depending on your temperament, I guess — testing has become routine and seems remarkably efficient.

I called 811 on Saturday, public health phoned me back a couple of hours later with an appointment for Sunday, and by mid-day Tuesday — less than 48 hours later — I had my test result. (It was negative.)

Bealy, who also tested negative, said her results came back in 47 hours, and she was grateful for the speedy response, because the waiting period was “really stressful. Even though I was thinking I’ve got a cold, it’s allergies, I’ve had a hoarse voice before, suddenly it was super-stressful.”

The pandemic may feel like it’s lasted forever, but it’s only been a couple of months. I found it impressive, and also somehow comforting, that so much effort had gone into thinking about every step of the process.

Bealy and I were both sent to the Clayton Park testing centre. When you walk in, a masked staff member directs you to clean your hands with sanitizer. You put on a mask they have prepped for you by pulling it partway out of a box, make sure it’s on correctly, then clean your hands with sanitizer again. Another employee presses the elevator buttons, inside and out, and when you arrive in the waiting room, you sit in one of the few seats not blocked off by caution tape. 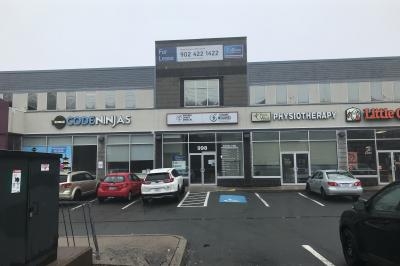 The Clayton Park testing centre is in a nondescript strip mall.

At the reception desk you hold your health card up in front of a plexiglass shield, then wait your turn.

Two other patients came into the waiting room while I was there. One sat reading the documents we’d been handed on our way in, while the other stayed by the window looking at her phone. Watching people come and go gave the situation an almost normal feeling. This is just what we do now.

“I felt the same way. It was kind of interesting.” Bealy said, when I told her about my experience. “I was actually really impressed with the whole process and how quickly it went. I also think it’s just — hey, it’s a test like any other medical test we might get, and I don’t think we should be feeling a stigma even if we’ve got the virus. It’s insidious, right? It’s everywhere.”

After the test, you sanitize your hands again, take the elevator down without touching the buttons, sanitize yet again before leaving the building, and remove your disposable mask once you are outdoors. Then wash your hands again.

In every interaction I had with the health authority, I got the same clear, simple messages: self-isolate as much as possible until I got my test results, use a separate bathroom if possible, and call 811 again if I felt worse. The nurses and the documentation both described clearly what self-isolation meant.

By the time I was sitting in Belinda’s office, the only question I had was which test I was getting. Some COVID-19 tests involve swabbing the throat, which I am told is much less unpleasant.

Belinda asked me if public health had told me which swab I was going to get. They hadn’t. “Good,” she said. The reason? The health authority doesn’t want people to back out of testing if they know they are getting the nose swab.

Adams, the NSHA spokesperson, told me which kit patients get just depends on what’s available at each location. “All kits are validated and are equally effective and accurate.”

I  just lucked into the nose (or more properly, nasopharyngeal) test.

And now that it’s all over?

I still feel tired and a bit worn out. I took a nap in the middle of writing this story. But I got my hair cut today and I can get my blood work done with a clear conscience.