You are here: Home / Featured / A mega development on Lake Banook shows that the Centre Plan is a cruel joke 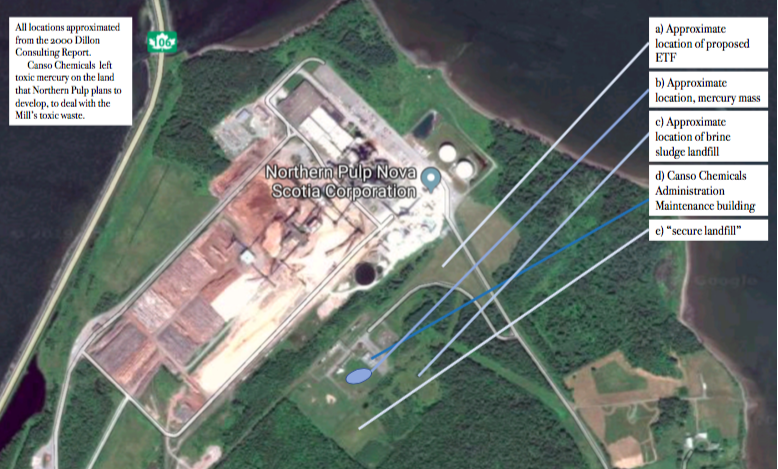 The Canso Chemicals plant opened in 1970, and for the next 22 years used large amounts of mercury to produce chlorine and caustic soda for the pulping process. According to a Canadian Press report of June 20, 1977, provincial and federal government officials had been unhappy with high levels of “unaccountable mercury losses” from the Canso Chemicals plant, causing the provincial environment department to order the company to sharply reduce the losses.

“The plant’s annual unaccounted mercury losses have averaged several tons [a year] since reporting to the federal environment department began in 1972. It reached a high of five tons in 1975,” says the CP report.

When the pulping process was changed because of new pulp and paper effluent regulations in Canada, the Pictou County pulp mill switched from chlorine to chloride dioxide for its bleaching process, and the chemical plant was no longer needed. It closed in 1992.

Baxter details the measures taken to address the mercury contamination of the site, but the short of it is that the bulk of it is still there and spreading, taking a slow march towards both the water table and Pictou Harbour.

The Environmental Assessment for the proposed effluent pipe doesn’t address the potential for disturbing mercury or releasing it into the air, potentially bringing great risk to humans in the area.

Baxter tried to obtain the results of ongoing mercury monitoring of the site, but was frustrated by government bureaucrats at both the provincial and federal levels, apparently in violation of international treaties that call for making such information readily available.

Click here to read “Nova Scotia has a mercury problem.”

“The city is creating a new functional plan for Herring Cove Road, featuring an ‘interim’ plan with considerable improvements to walking and cycling, and an ‘ultimate’ plan that includes some short but key transit lanes,” writes Examiner transportation columnist Erica Butler:

The city’s plan for the Spryfield street includes plenty of walking and cycling infrastructure, but leaves transit lanes in the realm of high-cost wishful thinking. 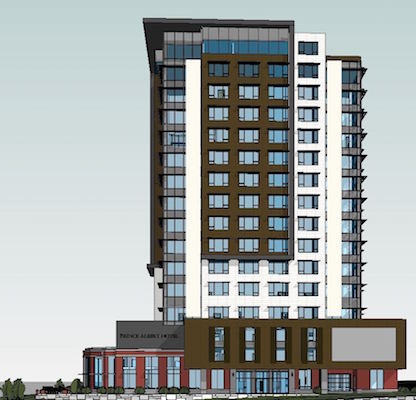 “There has been a twist in the controversial Prince Albert Road and Glenwood Avenue development,” writes Dartmouth councillor Sam Austin on his personal website:

Site preparations are underway, but the developers don’t intend to build the eight-storey apartment building that Council approved back in September. Instead, they intend to build a 16-storey hotel. The hotel development is as-of-right, and doesn’t require Council approval. It’s a decision that makes a mockery of both the upcoming Centre Plan and the seven year process to get to an approved mid-rise residential project. It’s deeply disappointing and infuriating and I will fight it.

Austin is rightfully indignant about the change, and there’s no question that he’ll do what he can to block the hotel from going up, but even he admits that “It won’t be easy.”

For me, this development illustrates what’s wrong with the Centre Plan, and with city planning in general. I’ve been watching all this as a reporter for 13 years, so let’s recap.

Let’s step way back, to HRM By Design, the Andy Filmore-led planning exercise for downtown Halifax.

There was considerable citizen buy-in for HRM By Design. While the Heritage Trust (in retrospect, rightly) distrusted the process from the beginning, a lot of people thought that a good plan would go a long way to preserving heritage and historical buildings, and could maintain the “feel” of downtown. Everyone anticipated that new buildings will always go up, but if new construction is in scale with the rest of downtown, if the sight-lines down the streets to the harbour were maintained, if the small-block pedestrian-friendly character of downtown could be preserved, all good. The old Daily News gave the effort repeated front page coverage, and many thousands of people contributed many evenings of their valuable time to give their input, and they trusted the process.

Characteristically, I had a general annoyance about the whole thing. The sticky-note wielding planning students annoyed me. The buzzword-slinging bureaucrats annoyed me (I swear, if I hear “vibrant” tossed around one more time, I’m going to slap someone). The mealy-mouthed politicians annoyed me. I was annoyed that no one wanted to address the elephant in the room: the overwhelming political power of developers.

Still, my sense at the time was a general attitude among citizens prevailed: we could loosen the reins on developers a bit, let them build within a relatively tight envelope of “allowability” in the core downtown area, while giving them a more or less free run in the Cogswell interchange, building whatever schlock they wanted there. Important in all this was the creation of historic preservation districts, especially along South Barrington Street.

We could argue over the almost-finished product. My opinion is that it was reasonably good.

But between the almost-finished product and the actual approved-by-council HRM By Design, the whole thing was gutted.

Andy Filmore was clearly involved in a secret, undemocratic scheme to benefit Joe Ramia, citizen participation in HRM By Design be damned. So at the last moment planning rules within the plan were changed, with new exemptions put in place to allow for the Nova Centre. I wrote about this in detail in an article for The Coast, “The Convention Centre Tower Play,” in which I unfortunately buried the lede:

Through 2008, Joe Ramia had a fortunate run of luck with his Nova Centre proposal. A judge ordered the sale of the Midtown property to Ramia the day before he had to demonstrate ownership. The EOI evaluation team scored the competing Hardman proposal for a convention centre on the Cogswell Interchange higher, but failed to notify anyone about the scoring and didn’t move on to the next step in the process. The concept of using the Cogswell property as a land bank for downtown was adopted by bureaucrats without first being tested in the realm of public opinion. And, contradicting its public vote of just 10 months before, Halifax council secretly voted to deny Hardman the use of the Cogswell land for a convention centre, leaving Ramia with the sole viable convention centre proposal.

And so HRM By Design was amended just before it was passed by council. An exemption to the massing and height rules was allowed for the Nova Centre, and the small blocks were tossed out so Grafton Street could become a quasi-private Glory Hole through the development. The “feel” of the central downtown was ignored, and the Design and Review committee OKed a gigantic 1980s-era blue glass building with an annoying lighting scheme.

There’s no getting around the monstrosity in the centre of downtown. Ask the average citizen who took place in the HRM By Design process if this is what they thought they’d end up with, and you’ll get a resounding “no.”

And the rest of downtown has suffered. The South Barrington Historic District wasn’t implemented quickly enough, and so now there are demolitions of heritage buildings planned along the street. The YMCA was given another exemption to height and massing regulations because the place is the playpen for the rich white men who run this town, so whatever they want. And: Queen’s Marque.

Remember that HRM By Design was supposed to save downtown.

I was told by many a politician that, whatever the faults of HRM By Design, the Centre Plan “would get it right.”

According to a staff report, on “October 4, 2011 Regional Council initiated Centre Plan.” That was seven-and-a-half years ago. I distinctly remember that councillors were saying the Centre Plan would be adopted in 2014, and then before the October 2016 municipal elections.

The election came and went with no Centre Plan, and in December 2016, a slew of properties — 18 of them — were proposed to be exempted from the “coming soon! promise!” Centre Plan rules by “grandfathering” their pre-Centre Plan zoning conditions.

Then in August 2017, chief planner Bob Bjerke was abruptly fired, apparently for actually trying to implement the Centre Plan. As Erica Butler wrote 17 months ago, in November 2017:

In his three and a half years on the job, Bjerke made an impact. He created a five-year strategic plan to “modernize” the planning department, and was halfway through implementing it. He revived the process to create a Regional Centre Plan, now council-approved and waiting to be translated into an actual municipal by-law.

All this delay, delay, delay has served its purpose. Lots of developments — the 16-storey hotel on Lake Banook among them — can get through on the old as-a-right rules that haven’t been updated because the Centre Plan hasn’t been adopted.

And that’s before we even worry our heads about whether, should the Centre Plan ever be adopted, it will be, you know, worthwhile. Council has already signalled that whenever a favoured developer comes along — say, George Armoyan with the Willow Tree development — the planning rules can be set aside, exemptions granted, absurd trade-offs for non-existent “affordable housing” granted.

Tell me why I should give a damn about the Centre Plan? Or about planning generally?

4. Corruption in the rocket industry

Corruption expert Don Bowser takes a hard look at Maritime Launch Services and its connections to the shady Ukrainian rocket industry, particularly the Yuzhnoye and Yuzhmash firms, which have a long history of “corruption and malfeasance,” especially when it comes to joint ventures with international firms.

Bowser raises some serious concerns about the proposed Canso launchpad.

Community Design Advisory Committee (Wednesday, 11am, HEMDCC Meeting Space, Alderney Gate) — if you for some reason want to completely waste your time by going to a meeting that will discuss the completely meaningless Centre Plan, here’s your chance.

Newfangling Rounds: One Patient One Record: Next steps to ensure we are ready (Thursday, 8:30am, Bethune Ballroom, VG Hospital Site) — Keltie Jaimeson and Alyson Lamb will provide an overview of the OPOR strategy for Nova Scotia, its scope and the potential implications for research. Register here.

Colonel (Ret.) Chris Hadfield donated thousands of copies of his space photographs to Dalhousie so we could share, preserve and promote their use in teaching and research. The photographs capture what Colonel Hadfield saw while orbiting Earth as Commander of the International Space Station (ISS) in 2013.

Using the Story Map platform to present a curated selection of the photographs, we are proud to launch the Chris Hadfield Space Photographs Collection, which we will be displaying on our new data visualization wall in the Killam Library. We will be joined by representatives from Chris Hadfield Inc. for this special event. All are welcome.

I had intended to link to a bunch more articles but kind of went off on that Centre Plan thing and ran out of time.