You are here: Home / Featured / A man was killed in a 1998 explosion at the Irving refinery; afterwards, a safety report made recommendations that would “prevent a similar occurrence,” but 20 years later the refinery exploded again 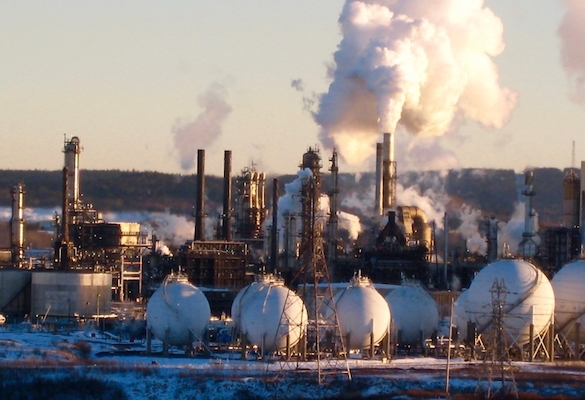 Canadian Press reporters Holly McKenzie-Sutter and Brett Bundale interviewed Jonathan Wright, an American contractor who was working just 25 metres from the site of the explosion at the Irving Oil refinery Monday:

Then he was thrown to the ground and turned to see a wall of orange, as flames surrounded him and several other workers after a massive explosion at the Irving Oil refinery in Saint John, N.B., on Monday morning.

“You could not see anything besides smoke and flames,” Wright said. “I thought we were done right there.”

“It was a (expletive) nightmare, I’ve never seen anything like that in my entire life,” Wright said in an interview on Tuesday.

“I thought I was dead for sure.”

Wright said he had to jump through high scaffolding and pipes several metres in the air to escape. He didn’t realize his coworkers were behind him until after he was outside, and he thought they were likely killed.

CBC reporter Bobbi-Jean MacKinnon interviewed Terry MacEachern, a boilermaker who was also working at the refinery when it exploded Monday:

He says it was a chaotic and scary situation when the blast hit, pushing some workers into “panic mode.”

At first, it just sounded like a crane had dropped a load of steel and “everyone just kind of paused and looked at each other,” wondering what had happened.

MacEachern, 36, who was about 180 metres from the origin of the blast, says the shockwave knocked him back about a foot. Other workers who were closer to the site “flung” 10 feet across the ground.

“You could feel it literally right through your body. It was pretty intense.”

People were “sliding” down scaffolding and yelling, “run, run run.”

“Not knowing whether the rest of the plant is going to blow up or not, it’s kind of a scary moment,” said MacEachern.

“When you’re seeing 280-pound guys keeping up with you, you know it’s go time.”

“Sean Tucker, an associate professor at the University of Regina who specializes in occupational health and safety, said there’s a lot of public concern in Canada about how oil is transported, but not much attention is paid to refineries themselves,” reports the Canadian Press:

Tucker said one issue is that large refineries and similar businesses often operate in smaller jurisdictions in provinces such as Saskatchewan, New Brunswick and Newfoundland and Labrador.

“My concern is that there’s a power imbalance between the power regulator and these large refining companies,” said Tucker.

Compounding the issue is aging infrastructure, which Tucker said can lead to “fires at these refineries every two years or so.”

Irving said that the explosion happened after a diesel treating unit — machinery that helps remove sulfur from the diesel — malfunctioned.

This is not the first time the refinery exploded; a man was killed in an eerily similar explosion in 1998. A workplace safety report explained:

At approximately 9:30 am on Tuesday, 9 June 1998, an explosion and fire occurred at the Irving Oil Refinery in Saint John. One worker, William Hackett, who was in the immediate vicinity, was killed as a result of this catastrophic event. Another worker was taken to hospital with minor injuries.

The safety report detailed that the 1998 explosion happened at the hydrotreater reactor feed furnace, which by my untrained eyes appears to be the same sort of equipment where Monday’s explosion occurred.

The safety report made five recommendations, which it said “if implemented would prevent a similar occurrence.”

Four years later, in March 2002, an explosion at the refinery sent three workers to hospital with burns, reported CTV.

In September 2012, there was yet another explosion at the refinery that sent a worker to the hospital, reported the CBC:

The incident occurred at about 11:52 a.m. AT during scheduled hydrogen plant turnaround work, company spokeswoman Carolyn Van der Veen said in a short statement that was issued about two hours after emergency crews were called.

A carbonate tank undergoing maintenance work was overpressurized, she said.

More recently, Irving Oil was ordered to pay $4 million after an investigation related to the 2013 Lac Mégantic disaster found Irving had been improperly transporting oil. Reported Sarah Petz for the CBC:

The investigation found that Irving Oil failed to comply with applicable safety requirements by failing to properly classify the crude oil it transported by train, and that the shipping documents on board the trains were “erroneous,” the Public Prosecution Service of Canada said in the news release.

The investigation also found that Irving Oil did not adequately train its employees in the transportation of dangerous goods.

The offences occurred between November 2012 and July 2013, when close to 14,000 train cars transported crude oil to Saint John.

Last year [that is, in 2015], for example, the Reuters news agency discovered that Irving Oil has logged at least 19 accidents classified by regulators as “environmental emergencies” at its existing facilities in eastern Canada since 2012, including three that drew warnings for delayed reporting. Irving Oil’s refinery and its storage terminals have had environmental emergencies ranging from petroleum spills as big as 3,000 barrels, to smaller incidents such as refinery emissions of sulfur dioxide exceeding permitted levels.

In 2013, New Brunswick’s Department of the Environment issued Irving a warning for taking more than a full day to report a storage tank leak of about 132 gallons of crude.

The bad news got worse this past weekend when Reuters reported that Irving Oil’s refinery spewed an excessive amount of ash-like catalyst into Saint John at least a dozen times since 2010. The concoction of sand and metal compounds, used in the production of gasoline, affects human health. Between August 2010 and December 2015, records show the refinery had repeated operational problems that triggered the releases of the substance, which sometimes left surrounding homes, vehicles and backyards coated by a gritty dust. Prolonged exposure has been linked by health experts to potential lung damage.

I keep coming back to Sean Tucker’s concern that “there’s a power imbalance between the power regulator and these large refining companies.” People who watch governments deal with large industries call this “regulatory capture” — instead of working for the public interest, the regulators in essence do the bidding of the companies they’re supposed to be regulating. 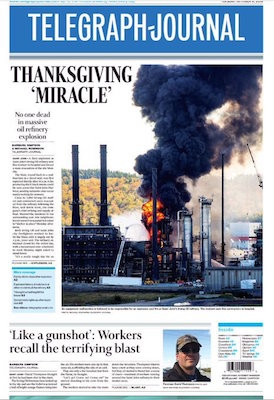 How is it that TSN’s “CFL Insider” Dave Naylor knows that Halifax council will soon be discussing a stadium, yet the city isn’t making such a discussion public?

Naylor says the meeting is on October 28, which is a Sunday, so he probably means the October 30 meeting.

Naylor tells us that the council discussion “may include recommendations for final steps to bring back a financial structure, a site recommendation, all those kind of things. And what the means is that eventually, if there’s positive momentum at the end of that meeting on the 28th, the group CFL Atlantic will be able to work with the city and try to finish of this deal with the province, and come back with a site and basically a total package with all the partners involved.”

Ah, so the province is involved.

You’ll recall that back in July, Premier Stephen McNeil said that he would oppose “general revenue” money being spent on the stadium, which the CBC wrongly interpreted in a headline as “Premier says taxpayers’ dollars won’t be used to build CFL stadium.”

But as I wrote at the time:

Seems to me, despite Stephen McNeil’s refusal to use provincial “general revenue” funds for the stadium, the entire proposal is dependent on the province — with some combination of using another pot of non-general revenue money, creating that special development zone, providing financing at government rates, giving or trading land, tax breaks, or something else I haven’t envisioned yet.

All or any of which is using taxpayer money.

Stadiums don’t come cheap. This will be sold as a “rightsize” stadium or some such bullshit, but we’re talking $300 million, easy, all costs in, and there’s no way the ownership group is going to pay more than a tiny sliver of that. The rest is on you and me.

In any event, Naylor says this will lead to a November “kick-off” for season ticket sales and a name-the-team contest.

“Halifax Roughriders” has a ring to it.

The Halifax Regional Municipality will pilot the implementation of Leading Pedestrian Intervals (LPI) at six signalized intersections throughout the municipality on Thursday, October 11.

Pilot locations include the following intersections:

An LPI is a timing option used for pedestrian signals that turns the “walk” signal on before the adjacent vehicle signal, giving a “head start” to pedestrians. This head start gives pedestrians an advantage over turning vehicles at intersections and can help improve driver yielding behaviour as pedestrians are better able to establish their presence within the crosswalk.

This pilot will help inform the potential for expanding the use of Leading Pedestrian Intervals at other locations in the future.

I’ve seen these work is several other cities, most notably in Chicago. I would’ve liked to see Spring Garden/Coburg/Robie and Victoria/Thistle on the city’s list, both of which have a very high volume of student pedestrians.

The city this morning issued a Request for Proposals (RFP) for the “Africville Interpretive Framework Project,” in particular an “Interpretative Enhancement Framework for a future Interpretative Plan” that will see the development of “3-5 interpretive elements with themes, content and conceptual design” at the historic site. The total budget for the project is $50,000.

All well and good, except the timeline for the project includes the “final approval of Halifax Explosion Marker. This location must be finalized by October 1, 2018 and will be developed in conjunction with the other 3-5 interpretive element locations.”

October 1 was a week ago…

Appeals Standing Committee (Thursday, 10am, City Hall) — nothing terribly interesting on the agenda. 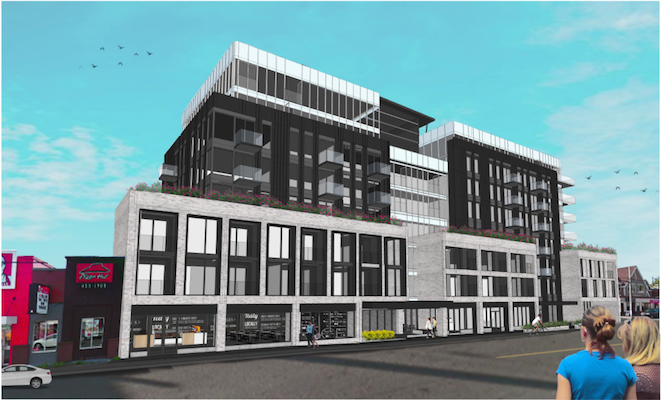 HPPAC Meeting  (Thursday, 6:30pm, St. Andrews United Church, 6036 Coburg Road, Halifax) — Dexel Developments wants to build a nine-storey building at 6324 & 6330 Quinpool Road. If their architectural drawings are to be believed, they’re going to do away with car traffic and cyclists will be pedalling the wrong direction on Quinpool Road.

The Legacy Spaces program is an opportunity for corporations, government, organizations and educational institutions to play an important role in their communities.

Iced: The Story of Organized Crime in Canada (Thursday, 8am, Unilever Lounge, Sobey Building) — Stephen Schneider will speak. Ten bucks, but you get soggy eggs.

Science and the Public Sphere: What is Science Literacy and What is Its Public Value? (Thursday, 7:30pm, Alumni Hall) — a panel discussion with Daniel Cressey, Linda Pannozzo, Shelley Denny, Karen Traversy, and Ian Stewart. From the event listing:

The natural and social sciences are key to dealing with today’s many environmental, health, and social issues. However, many claim that the sciences are not being adequately used to address these issues. Why? Is this a problem of scientific literacy? Who should be responsible for generating, assessing, and communicating scientific information? What degree of scientific literacy is necessary for public participation in democratic governance? How can we encourage a broader notion of literacy that includes other forms of knowledge, e.g. local and indigenous knowledge, amongst both scientific experts and the general public? To address these timely questions, members of this panel will offer their insights drawn from their experience in science journalism, authorship, environmental management, and active public engagement.​