1. Another SHIP Show at the Civic Centre

The so-called “Novaporte” in Sydney will look nothing like this schematic supposedly representing it, because it will never exist.

“Okay, here’s what we’re going to do,” writes Mary Campbell:

you’re going to give me your cell phones and I’m going to lock you in this room and let you read this article. You can take notes, but I’m going to take them away from you when you’re done and burn them because this article is my intellectual property and there are commercial sensitivities involved. There will be a quiz at the end, and if you get anything wrong, I keep your cell phone and I get an option to buy your shoes. Why? Because I say so. Got it? Good. Now hand over the phone.

JUST KIDDING! Who do I think I am, right? The Mayor of the CBRM?

You can take all the time you like to read this article. I apologize right now for its length, but making sense of the latest shenanigans in the Cape Breton Regional Municipality (CBRM) is not for the faint of heart. As I said in the headline, it’s been a real SHIP — as in, Sydney Harbour Investment Partners, our port promoters — show.

It all started with one of those surprise, last minute, in camera Council meetings Mayor Cecil Clarke loves to call. Word went out last Tuesday there would be an in camera session about something related to the Port of Sydney on Thursday at 10 am. At that session, Council was treated almost as badly as I was threatening to treat you at the beginning of this article — they had their cell phones taken away, they had any notes they took as they attempted to come to grips with this something related to the Port destroyed, they weren’t allowed to tell reporters what they were discussing.

Campbell goes into great detail about the history of the port proposal and the players in the game, then concludes:

Really, it is starting to seem rather wonderful that in this one, small port-related thing the CBRM did follow something resembling a “process.”

But it doesn’t make up for forcing a complicated financial deal through Council in too short a time, hiding the details from the public, privileging “commercial sensitivities” over the citizens’ right to know, meeting in secret, allowing Jim Gogan to represent both the CBRM and SHIP (which, let’s face it, is what he’s doing — otherwise, wouldn’t SHIP have wanted a representative at those meetings?) and inviting provincial ministers (who happen to be local MLAs) to address you in secret about public matters (the CBRM charter).

Our Mayor has most of our Councilors so cowed, they seem to be suffering from some form of Stockholm Syndrome: “Yes, he locked me in a room and took my cell phone away and tried to make me vote on a deal I’d barely had time to read but he let me ask questions of the CBRM staff and they were so nice about answering them.”

What kind of municipal leader treats his fellow elected representatives and staff like that? On what planet does it make sense to spend 18 months negotiating a deal and then allow an elected body only five days to read it, digest it and vote on it?

Click here to read “Another SHIP Show at the Civic Centre.” 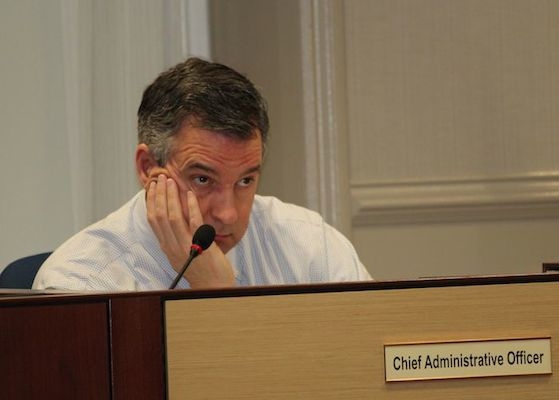 Butts was no doubt brought in to pull strings on Mayor Mike Savage and city council; that’s already proven to not be so difficult as Savage started a stadium puppet dance just three nanoseconds after Butts showed up on the scene.

OK, longtime Examiner readers… What’s the best tell that muckymuckdom is trying to snow the public? You’ve got it — they sling the “world-class“es around like nobody’s business. Continues Jones:

“It’s a very creditable group of people with the financial wherewithal to do this,” said [CFL Commissioner Randy] Ambrosie. “The big question, of course, is the stadium. But I’ll give the different levels of government credit. They recognize this is more than about football. It’s about opening a part of our country known for world-class hospitality to play host to any number of world-class events.”

And the proposed team even has a name: the Schooners. Sigh. Because nothing screams success like a reference to the ill-fated Bluenose II (or is it III?) restoration or rebuild or money hole or whatever you want to call it.

Actually, “Atlantic Schooners” isn’t a reference to the Bluenose failure but rather to a previous failed CFL expansion, according to the non-existent team’s website, which is in desperate need of a copyeditor:

The Atlantic Schooners was (sic) awarded a CFL conditional franchise in 1983 and (sic) was contingent upon building a stadium. This unfortunately never happened and the franchise was pulled 1984 (sic) prior to the Schooners ever playing a single game.

For all intense (sic) and purposes the Schooner (sic) laid (sic) dormant till 2009 when the league decided to test the waters in Halifax with a preseason game between Hamilton and Toronto which quickly sold out with games after (sic) held in Moncton in 2011 and 2013.

“Intense and purposes.” Sigh. Sister Theresa would’ve smacked me upside the head with the yardstick for that one.

Butts got paid northward of $400,000 annually at City Hall, and was lured away to Clayton, most likely with an even higher salary. He’s got dough! And Richard, old bud, I’ve got people looking for work as copyeditors. You could probably hire one of them to give your website a once-over for like a measly 200 bucks, and some world-class website editing it would be. Give me a call.

Sigh. Have I sighed already?

“How can the new group of mucky mucks promote this renewed Schooners team?” I ask with a quivering liver. 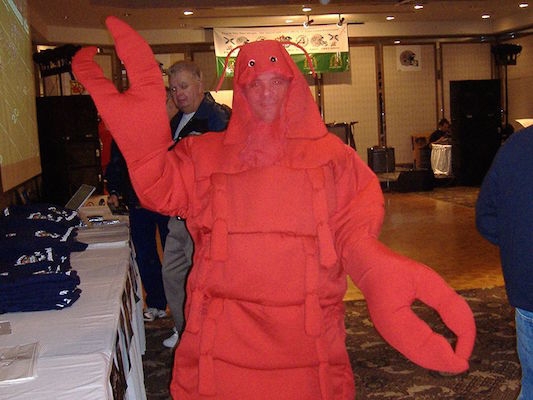 The lobster-themed team mascot demonstrates how serious the Schooners proposal is.

With a “kitchen party,” that’s how, complete with a man walking around in a lobster costume, a no-name “Celtic band,” and (judging by photos of past parties) lots of Keith’s beer, because why not pile all the stereotypes on thick? The kitchen party isn’t in a kitchen, however, but rather at the Ottawa Delta, today at 3pm and tomorrow at noon (who starts a kitchen party at noon?). Tix are $10, cheap compared to the hype.

“In response to a critical report from the province’s auditor general, Nova Scotia’s premier says Michael Pickup should run for office if he wants to comment on policy,” reports Marieke Walsh for Global:

“If he chooses and wants to do public policy there will be 51 ridings for him to run in,” said Premier Stephen McNeil.

The Nova Scotia Health Authority and the province’s health department accepted all 21 of the auditor general’s recommendations.

I’m travelling, and yesterday was stuck in the Dulles airport for six hours because, er, capitalism and competitive markets lead to the best distribution of resources and under-regulated industries result in improved service to the customer, or some such bullshit, I’m not sure. But while swirling around overpriced drinks and forking through bland reprocessed lunch, I had great fun reading the legislative reporters’ comments on the McNeil-Pickup battle.

Yes, this isn’t even lazy reporting; it’s lazy pointing at other reporters’ tweeting. So sue me.

Michael Pickup @OAG_NS says he's 150% surethe work he and his office did is within the AG's mandate. #nspoil

In case you're wondering here's what the @OAG_NS is empowered to do according to law. #nspoli pic.twitter.com/wJKAg9KCte

When it comes to knowing his mandate, I'm inclined to side with the AG. #NSpoli https://t.co/Kc6T7RjYZq

Just to put an even finer point on how inaccurate this is: the @OAG_NS has two audit teams: one for finance and one for performance. To judge performance is to say whether something is working. This isn't new. #NSpoli https://t.co/Ex5Ja1Iam2

There’s a rule in logo design: No matter how experienced and creative your design team is, always run your proposed logo by people who were not involved in creating it — third parties, just regular lay people, people who have fresh eyes. Because if you don’t, you can end up with such unfortunate logos as these: 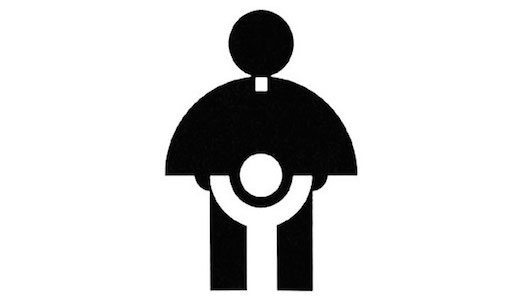 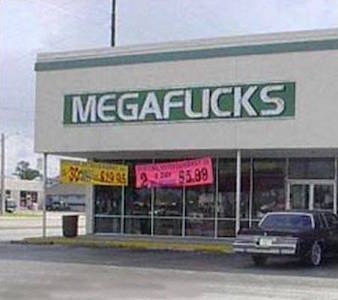 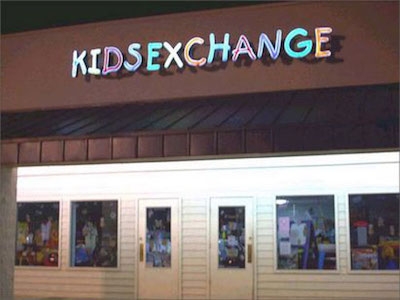 I bring this up because there’s a similar rule with naming enterprises: run those acronyms by someone — the Wisconsin Tourism Federation, South Lake Union Trolley, Conservative Reform Alliance Party, and (Microsoft’s) Critical Update Notification Tool maybe should’ve had a re-think.

Which brings me to the Ocean Supercluster.

“Some of the biggest players in the region’s ocean economy have joined forces to come up with the Ocean Supercluster proposal, which aims to find solutions to problems extracting resources from the ocean,” reports Paul Withers for the CBC:

The Canada-wide competition is an attempt to drive economic growth by backing innovation in sectors where government can expect “exceptional performance” and an “outsized impact on job creation and GDP.”

Silicon Valley is the model.

Oh, that’s a great idea! We’ll just do what Silicon Valley did. Easy-peasy. Why didn’t someone think of that before?

Other region powerhouses involved are J.D. Irving and Cooke Seafood.

Those well-known philanthropic corporations will contribute a total of $125 million for the Supercluster, and if approved, the federal government will match that amount (that is, with public money), and then we’ll all be rich, rich, rich. Hey baristas: I’d call your broker right now and talk about how you should invest the riches about to flow your way.

But as with the unfortunate corporate logos and acronyms above, maybe someone should’ve thought through the “Ocean Supercluster” name because the very second there’s even a whiff on misexpenditure of public money or some other misfortune or grift hits the endeavour, it will immediately be rebranded the Superclusterfuck.

I’m visiting family, so this is an abbreviated Morning File.