You are here: Home / Featured / A Halifax family explains what it’s like to have COVID-19 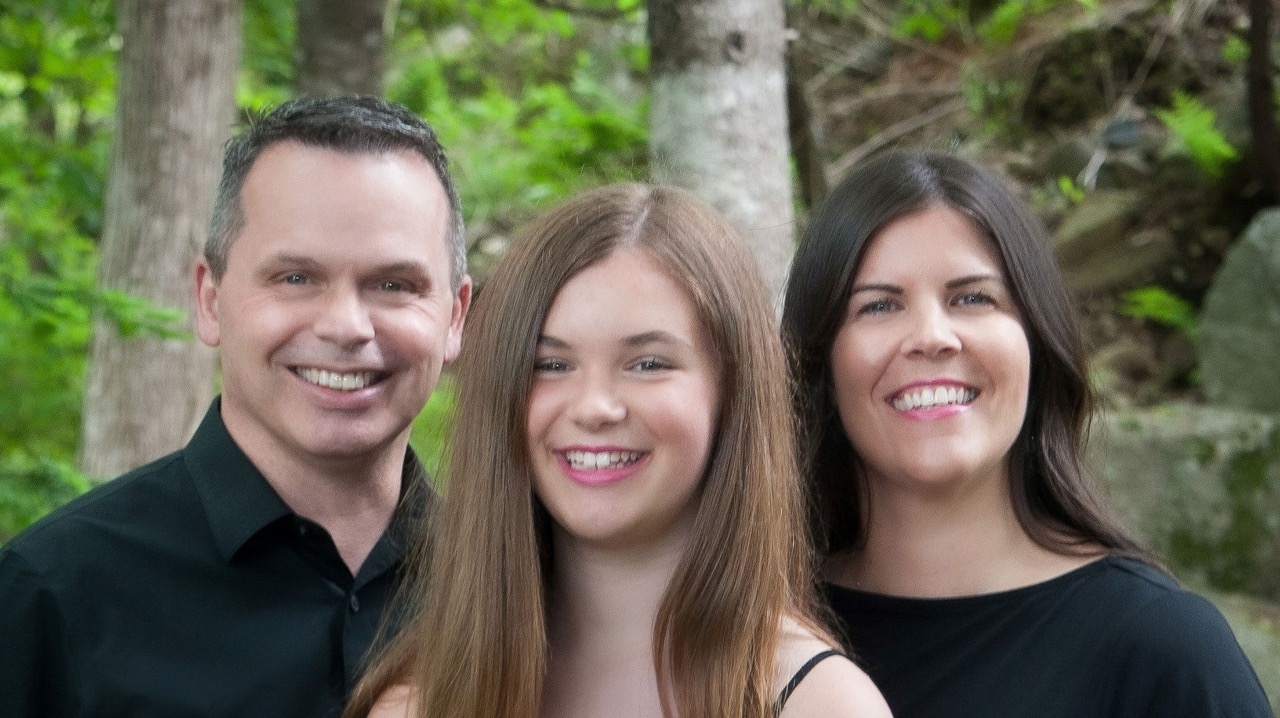 That’s a question Halifax resident Tracey Kieley, 44, and her husband Donnie Clarke, 50, have been asked frequently.

The couple both tested positive for COVID-19 on March 20, and were among the first 15 cases in Nova Scotia. Their 12-year-old daughter Drew Clarke initially tested negative, but on March 30 also received a positive diagnosis.

While all three are well on their way to recovery, they wanted to share their story to help quell panic, put faces to the growing numbers, and to stress the importance of following public health advice to prevent further spread of the virus.

The family left Canada on March 7 for a family vacation in the US, two days before B.C. announced Canada’s first COVID-19 death and four days before the World Health Organization (WHO) declared it a pandemic.

“When we departed on our vacation there were no advisories, no warnings, nothing. Everything was status quo,” Kieley recalled. “My daughter has an early March break, she has a two week March break and it started that Saturday (March 7).”

On March 16, amid growing panic, the couple and their daughter arrived back in Canada via Toronto. They returned to Halifax on March 17 and went straight home in order to self-isolate.

The next morning, March 18, Kieley woke up feeling “a bit stuffed up” and with what she described as a really bad headache and an eye ache.

“I didn’t have the normal (COVID) symptoms. No fever. I had a bit of a cough, but it was not constant, just a clearing of the throat from time to time. I was feeling awful but we thought maybe this is just a vacation hangover,” Kieley said.

Clarke also had a tiny cough and what he described as a stuffy throat. He felt very fatigued, but chalked it up to post-vacation malaise. He suggested to Kieley that even though they didn’t feel terrible, perhaps because they’d been out of the country they should call 811.

The couple eventually made it through the phone queue later that same evening and were told someone would call them the next day. When their positive results came in on March 20, they immediately took their daughter in for testing.

Although her test initially came back negative, on March 24 she began to complain of a sore throat and a stuffy nose. She tested positive on March 30.

“If we didn’t have it (COVID), I wouldn’t think to ever get her tested because she didn’t have those typical symptoms of a person with COVID,” Kieley said.

That’s one of the reasons she’s concerned when she hears stories about children who aren’t from the same household continuing to play together.

“Children could have it and never show a symptom and spread it to other people. It’s very dangerous. We’ve witnessed it one on one, that you can have a child that has mild flu-like symptoms or even a small cold and that could actually be COVID,” Kieley said.

“If they’re out running around in a park or playing with kids on playdates they could actually pass it on to somebody else. Part of the reason I want to tell our story is that what they (public health officials) are saying is true. They’re the experts. They know what they’re doing and they’re trying to save lives and protect the spread of this.”

“A child can have no symptoms, and what I visualize is them going to their grandparents and giving nanny and poppy a kiss and a hug and there you go. It’s passed on,” Clarke said. “They didn’t even know they had it. What the public health and government officials are saying, they’re saying it for a reason.”

When the couple received their diagnosis, Clarke’s  first thought was what would happen to their daughter if he and his wife needed to be hospitalized. Who would take care of her? Much of their extended family lives in Newfoundland, or include members living with underlying health issues that would make them unable to risk exposure to the virus.

“The first night that we knew we had it, it was a tough night for me from an anxiety standpoint thinking that Tracey and I have it, Drew doesn’t have it,” Clarke said.

“I’m accused of being a Debbie Downer, a negative thinker anyway, but I thought what if we both get hospitalized and she’s by herself? What do we do then? It was a struggle.”

The family agrees that one of the most difficult parts of living with COVID-19 was when their daughter had to self isolate. Kieley’s voice trembles with emotion as she recalls Drew’s reaction upon learning that both her parents had tested positive for the virus.

Although Kieley’s most overwhelming desire was to comfort her child with a hug, the virus had stripped away that possibility.

“I’ll never forget that image of how Drew reacted. It was really tough for me as a parent…When we told her she ran away from us and she cried and she had to isolate herself in her room and not be around us so we could not hug her,” Kieley said.

“We did not hug her for two weeks. So anyone who has kids? You’ve got to take this seriously. She had to be in her room, she came down, we all had to wear masks. We were constantly washing every handle, every surface, every single day and it was really difficult…We were trying to protect her.”

There were no self isolation board or card games, Facebook live parties or family movie nights. Clarke and Kieley were sick on the couch while their daughter was isolated and alone in her room.

“Please listen and self isolate and stay away from others. I know it’s hard, but it’s harder having two parents infected and one child not. You’re going to be separated so think about the consequences if people are infected and others are not,” she said.

“Especially if it’s a younger child. Imagine. How in the hell are you going to manage that, and who’s going to want to take a five-year-old for two weeks if they’re possibly infected? These are the consequences you have to think about. We lived through that for two weeks without being able to hug Drew or be around her and I’m telling you it’s not easy.”

Drew said she was terrified by her parents’ diagnoses and overwhelmed with sadness being forced to remain in her room all day. She also remembers feeling scared and nervous when she found out she too had tested positive for COVID-19.

“I was nervous because people are dying from this virus, it is all over the world and places are shutting down and people are going on lockdown, no one’s allowed to travel, it’s like a ghost town,” the 12-year-old said.

“And then to think you actually have what’s causing all of this? It’s kind of scary and creepy to think about it.”

While Kieley initially didn’t have a bad cough, within a few days of her diagnosis she said she was coughing constantly.

“I only had a fever once, and that was a week later and it went to 38.4 but other than that, fever was never something that was an issue for me.”

Although she feels better today, three weeks after her initial diagnosis, Kieley said her cough lingers and her sense of smell and ability to taste still hasn’t entirely returned.

The family has nothing but glowing reviews for the response and the care they’ve received through the province’s health care system. Kieley said a pediatric nurse even called their daughter to have a private conversation with her shortly after her parents were diagnosed. That call went a long way to dispelling their daughter’s fears.

The couple also receives daily calls from nurses checking in to make sure they’re still feeling well and that their symptoms aren’t worsening. Clarke said he wants the exemplary care his family received to be extended to other Nova Scotians, but the only way to do that is for everyone to do their part and follow public health guidelines.

“We were among the first people (to test positive) so they had the resources then to make those types of calls,” Clarke said.

“That’s the other reason for following all the guidelines around social distancing and preventing the spread. If this spreads much bigger, then those health care resources are obviously going to be stretched and they won’t be able to make those calls every day.”

Clarke urges people to only turn to reputable sources for health care information. He said in addition to the dedication of health care workers who took care of them, he’s been overwhelmed by the sense of community that’s surrounded them. He said so many people have reached out to check on them and to offer whatever help they can.

“There is a lot of negativity about it and obviously a lot of worry around it. The positive side is the majority of people recover from this and we’re living proof…I was talking to a friend of mine who said I need to tell people so they can know someone who has it and know what to expect,” he said.

“It’s interesting that when I started telling people, I did get comments back to that effect. Things like, I am so glad you told me, now I know someone who has it, I know that it’s not a death sentence, I know that I can reach out to you and get information.”

Kieley said she hopes that putting faces to some of the numbers might make some Nova Scotians take the virus more seriously. While they followed all the public health guidelines and did everything required, she finds herself wondering just how many people they might have infected if they’d decided to stop at the grocery store or elsewhere instead of straight home from the airport.

“I think it’s not resonating with people because they don’t know anyone who’s had it. It’s just numbers, it’s just, oh, we’ve got this many more cases today,” Kieley said.

“We wanted to share our story because if you don’t follow what Dr. Strang is saying and the premier and public health, you’re doing an injustice to the world and to your friends, your family and your community. This lockdown is just going to continue.”

Drew agreed. She called on her peers and on adults alike to take public health guidelines seriously and to treat this virus as the danger that it is.

“By not taking care they are putting people’s lives at risk,” she said.

“There are millions of people that have it, and by not taking action and trying to stop it, by not staying in, you’re causing things to worsen and you’re causing people to die.”