You are here: Home / Featured / A bad day for people on bikes

A pick-up truck driver who hit a cyclist on Waverley Road Wednesday morning has been charged with “Vehicle Passing a Bicycle while Travelling on Right When There is Less than 1 Metre between the Vehicle and Cyclist” according to the RCMP. The cyclist was taken to hospital with non-life threatening injuries.

Earlier that morning another driver hit a cyclist on John Brackett Drive in Herring Cove. The woman on the bike was taken to hospital with life-threatening injuries, but has since been upgraded to non-life threatening status. Police are still investigating the incident.

The coverage of both incidents is mostly based on the same police media releases, so it’s interesting to see the language used by various reporters. Philip Croucher at StarMetro framed the Herring Cove collision this way: “a cyclist was taken to hospital with life-threatening injuries after a collision with vehicle driven by a young man.”

Over at CBC News they framed it this way: “A 54-year-old woman has life-threatening injuries after being struck by a car while riding her bicycle in Herring Cove, N.S.” They described the Waverley Road collision as “[the cyclist] was hit by a pickup truck on Waverley Road just before 8 a.m.”

Road safety advocates have long complained that news reports mistakenly identify only cars, trucks and vehicles as the actors in collisions, when of course they are all being driven by people. Another issue is the use of passive voice placing the victim as the grammatical subject, which some have identified as problematic in terms of affecting readers’ perceptions of blame.

Anyway, it’s good to see Philip Croucher making an effort to identify that vehicles are driven by people.

2. Bus lanes planned for Robie-Young, though the money to build them still not budgeted 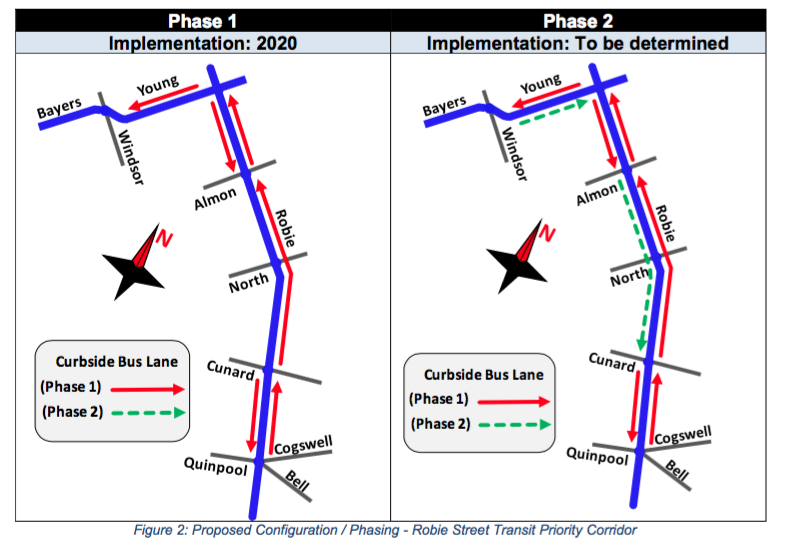 City council has given the go-ahead on a detailed design for partial bus lanes along Robie and Young Street, but as with the connecting Bayers Road transit lane project, the money to build the lanes is not allocated in the city’s capital plan until after 2022. Click here for the details. The story is behind the Examiner paywall.

3.  Someone is shooting up houses and cars in Colchester County

David Burke of CBC News reports that there’ve been four incidents of drive-by shootings in Colchester County in the past month, with the most recent incident in the wee hours of Wednesday morning, when someone in a black car pulled up to a home and shot at it. Writes Burke,

It’s become a pattern over the last month in Nova Scotia’s Colchester County — a small dark-coloured car pulls up and someone inside rains bullets into a nearby house or vehicle.

In that time, there have been four separate drive-by shootings within 22 kilometres of each other. Homes and vehicles in Debert, Onslow and Onslow Mountain have all been hit by gunfire, according to RCMP.

The RCMP have not confirmed that any of the incidents are connected, and won’t discuss potential motives.

4. Six more handguns on the market in Nova Scotia

A gun safe containing “six restricted hand guns and two rifles” has been stolen from a home near Great Village, Nova Scotia, according to an RCMP news release. “Someone smashed the patio door of the home, removed a gun safe, and left. Nothing else was disturbed,” reads the release.

5. Studying how to keep Nova Scotia attached to the mainland in the face of sea level rise

New Brunswick has put out a request for proposals to come up with three ways to protect the land and infrastructure along the Chignecto Isthmus, the piece of land connecting New Brunswick and Nova Scotia, reports the Canadian Press. The project is a joint effort with Nova Scotia and the federal government, prompted by concerns over the effects of climate change. The CP article continues,

The request for proposals says that climate-related sea-level rise and the frequency and intensity of storm surges has made the isthmus — and the dikes protecting the Amherst, N.S., Sackville, N.B., and nearby rural communities — “particularly vulnerable to climate change.” 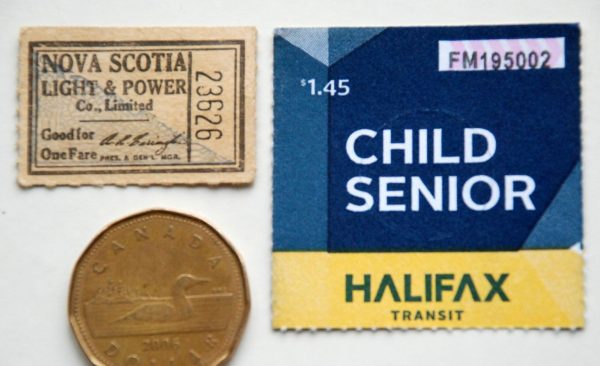 As Tim reported yesterday, Halifax Transit is proposing a fare hike for September. Regular adult fares could see a 25 cent hike, but seniors are being eliminated as a discounted category altogether, meaning their fare hike could be $1.

The CBC’s Carolyn Ray reports on the reaction from CARP Nova Scotia, (Canadian Association for Retired Persons) which is, understandably, negative.

“It is upsetting to us and really unfair to find that announcement we only heard about [Tuesday] is going before a committee [Thursday],” he said.

“We would certainly support the idea of making it more accessible to children, but that doesn’t mean you take the opportunity away from from people of another age who really need it.”

The Halifax Transit proposal includes a pilot to raise the cut-off age for children allowed to board buses for free from six to 12 years old.

1. A bike lane by any other name, might not be resented as much?

Tristan Cleveland reappears in StarMetro Halifax to argue for a renaming and reframing of bike lanes as “micromobility lanes.” Writes Cleveland,

Build lanes for everybody, anybody, who wants to travel faster than walking, but slower than driving. Scooters, e-scooters, skateboards, hoverboards, roller skates, bike share, e-bikes, electric wheelchairs: there is a growing variety of ways for people to get around cities quickly and conveniently, and they need a safe place to travel.

Together, these options are called “micromobility,” and they’re transforming cities for the better. We don’t need “bike” lanes. We need micromobility lanes.

Cleveland’s argument is two-fold. Making bike lanes more inclusive by definition can help stave off some of the negative associations people have with them, due to stereotypes of people on bikes as “self-righteous left-leaning urbanites.”  At the same time, the coming e-scooter wave will need somewhere to zoom around besides sidewalks. And bike lanes, er, micromobility lanes, seem like a natural fit.

2. The Globe says protected bike lane networks are the future

I guess no one at the Globe editorial board got the micromobility memo.

Their July 21st editorial points to Vancouver as proof that building a protected bike network pays off, and breaks down why.

One essential is protected bike lanes. Research shows separating bikes from cars is good for everyone, and is a key ingredient in encouraging cycling.

The third is that bike lanes have to be built as a network. A smattering of paths here and there – as is common in various cities – is better than nothing, but the system functions best when, as in Vancouver, bike lanes are connected, and it’s possible to travel from A to B to C.

The Globe points out that’s how Vancouver got themselves listed in the Copenhagenize Index top 20, a ranking of the most bike friendly cities in the world. And more importantly, it’s how they increased bike mode share by several percent over the past 5 years.

The news that a 10-foot female great white shark pinged along Mauger’s Beach on McNab’s Island reminded me of this story by former Coast news editor Jacob Boon from October 2018. Boon spoke to a Dal ocean research scientist about OCEARCH, the non-profit founded by a former reality fishing show host, which is known for making Twitter stars of the sharks it has tagged.

“Basically, they have a thin veneer of science,” he says. “Like a candy shell of science.”

Boon points out OCEARCH has been banned from several coastlines due to its practice of ‘chumming’ waters to attract sharks.

Halifax has a visitor. @GWSharkJane is swinging in to say hello today! pic.twitter.com/oYrIw0topd

Design Review Committee (Thursday, 4:30pm, City Hall) — Fougere Menchenton Architecture Inc. is seeking five changes to its approval for construction of a 12-storey hotel at 1872 Brunswick Street, at the corner of Gottingen and across from Citadel Hill.

No public events Thursday or Friday.

There are over 7000 signatures of concern on a petition launched in June 2019 regarding the Maritime Conservatory of Performing Arts and the historic building in which it is situated. There has been public demand for a town hall to discuss the future direction of the Conservatory’s building and concert hall and the Conservatory’s governance structure. The Conservatory Faculty Association feels there is enough information to host a town hall on all of these issues, and therefore invites the general public, the Conservatory’s Board of Governors, staff, faculty, parents and students, and other stakeholders to a Conservatory town hall.

Does anyone else think Robert Mueller looks a little tiny bit like Tim Bousquet?