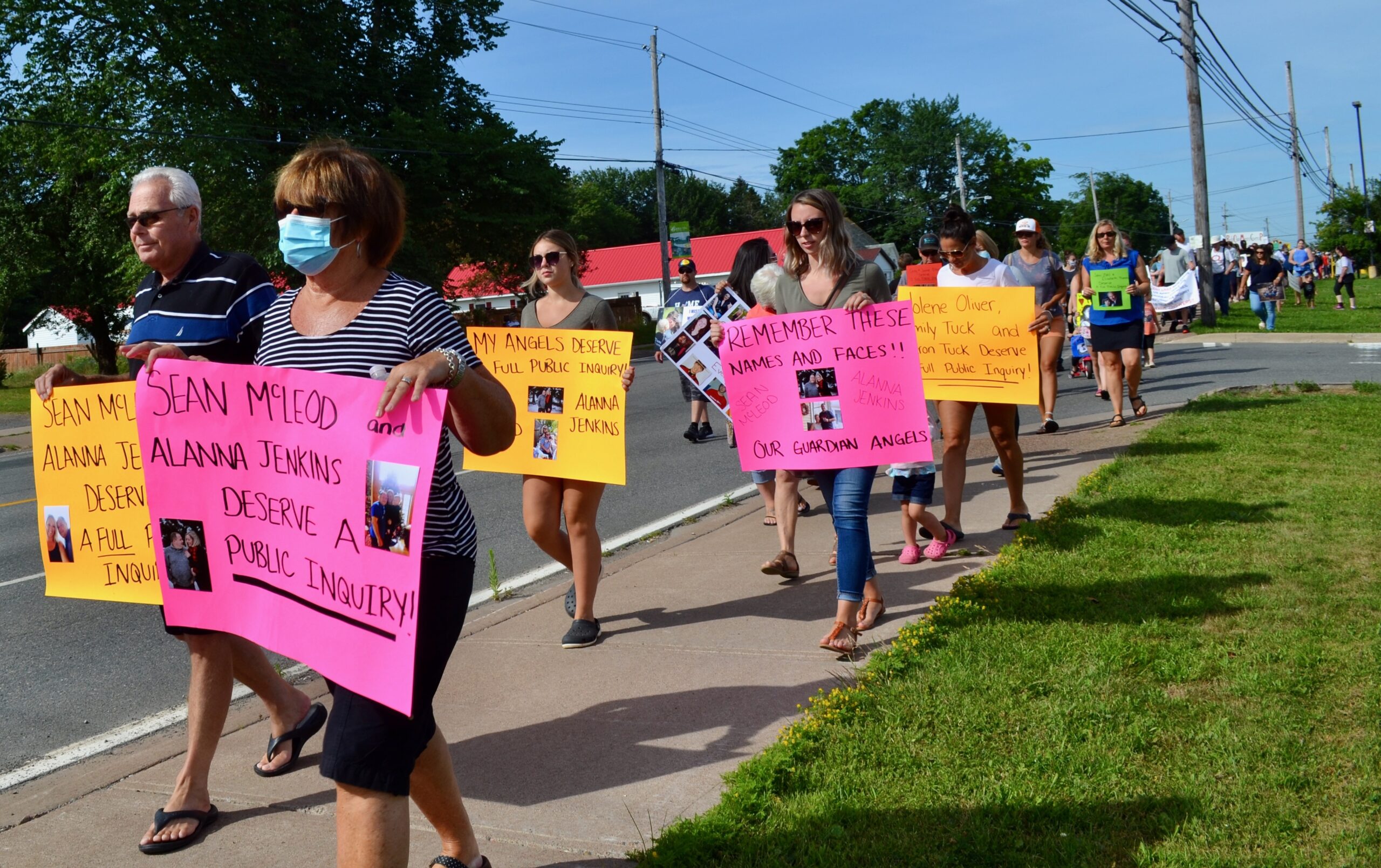 Family and friends of the 22 victims killed during April’s mass shooting held a peaceful march in Bible Hill on Wednesday morning to draw attention to their demands for a public inquiry. Photo: Yvette d’Entremont

About 300 family members and friends of the 22 people killed in April’s mass shooting gathered in Bible Hill on Wednesday morning to draw attention to their united demand for a public inquiry.

The crowd gathered at the local Foodland parking lot armed with signs featuring the names and faces of their loved ones. All reflected similar messaging: there needs to be a public inquiry into what happened April 18 and 19 and it needs to happen now.

The event was organized by Darcy Dobson, whose mother and VON nurse Heather O’Brien was killed the morning of April 19, and Nick Beaton, whose wife Kristen Beaton, a VON continuing care assistant, was also killed that same morning. She was pregnant. 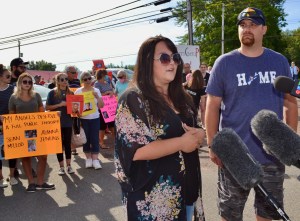 Darcy Dobson and Nick Beaton address reporters on Wednesday morning. Family and friends of the 22 victims killed during April’s mass shooting held a peaceful march to draw attention to their demands for a public inquiry. Photo: Yvette d’Entremont

Before marching to the nearby Bible Hill RCMP detachment, Beaton and Dobson spoke with reporters.

“We just want answers and the truth. We’re done sitting back just letting things go. It’s been three months now,” Beaton said. “And we don’t want a probe, we don’t want it analyzed, we want a public inquiry.”

Dobson said they expected and hoped for an announcement about a public inquiry more than a month ago, adding that the families deserve transparency.

“I know people say this will never happen but it did, it happened in rural Nova Scotia, and RCMP has things to learn,” she said.

Asked if a restorative justice approach is something the families would support, Beaton was adamant that only a public inquiry will suffice.

“With a public inquiry there are officers out there who are off on PTSD that are affected by that day that can’t handle what they’ve seen and what happened, which I don’t blame them one bit. This is just crazy,” he said.

“It gives them the chance to come forward and speak and not be punished for it or not be scared of their employer. We need a public inquiry for that. There are people out there who want to speak.”

Asked about their biggest frustration, Beaton said it’s the fact that anything they’ve learned so far has come from the media, not from anyone reaching out to the families.

“They said in one press release that the families were notified before anything, and, were you,” he turned to ask Dobson standing by his side. She answered with a no. He turned to the crowd behind him and asked them. The answer was a resounding chorus of ‘no.’

“We deserve to have those details before the rest of the world does, not to sit on our couch on a Thursday evening and hear it the same time everybody else does,” Dobson said.

Beaton said nothing short of a public inquiry will help the families begin to have some degree of closure. He described the last three months as “absolute hell,” and both he and Dobson said they don’t want anyone else to ever experience what they’ve lived through.

“It won’t bring them back, but we need closure, we need answers, we need the truth. Not smoke and mirrors,” he said.

Beaton said he feels let down “in every way possible” by both Prime Minister Justin Trudeau and Premier Stephen McNeil.

“I want to ask Justin (Trudeau) and McNeil, where is your public inquiry? If they can’t make it happen, who can,” he asked.

While he appreciated phone calls from them in the aftermath of the shooting, Beaton said he also received phone calls from his neighbours and more than half the people gathered for Wednesday’s march. He said he’s not heard from the Premier or the Prime Minister since.

“I’m not making today about it, but they both promised me PPE in my wife’s name and I haven’t seen nothing from either one of them,” Beaton said. “So I mean these are promises and it looks good on camera, but when it comes down to it there’s been nothing.”

Dobson said the crowd included representatives from each of the 22 victims of the mass shooter that the Halifax Examiner is referring to as GW. She and Beaton said the outpouring of support from their community, the province, the country and beyond has helped immensely. They now want to move forward.

“We just want to be able to start our grieving process.”

Tom Webber lost his son Joey Webber on the morning of April 19. He and about 20 family members showed up donning black teeshirts emblazoned with Joey’s name and photo. In an interview with the Halifax Examiner, Webber described his son as “a good old country boy and an all around nice fella.”

Webber said the last three months have been incredibly frustrating as he’s relentlessly searched for answers about what happened that day. He said three months is far too long for the families to be left waiting.

“It has been a lot of asking questions and getting no answers, trying to find things out on my own. I shouldn’t have to do that. I’ve found out quite a few things, but I’ve done it on my own,” he said.

“It isn’t right. We want to get their attention and get answers about what went on and admit to some of their blunders, but I doubt that’ll happen.”

If he had a moment to address Premier McNeil, Webber said he’d ask him to immediately get started with no further delay.

“I’d ask him to look into things and what went wrong,” Webber said. “And there are lots of places to look, I think.”