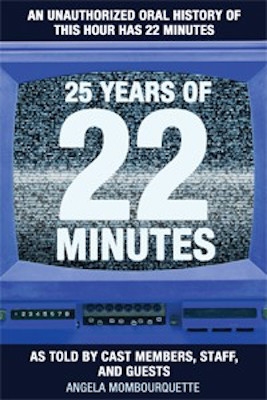 I was clueless about three cornerstones of Canadian culture when I immigrated from the U.S. two decades ago: Buckley’s cough syrup, Don Cherry, and This Hour Has 22 Minutes. It didn’t take me long to develop an aversion to the expectorant that touts its bad taste. Ditto for the bloviating hockey broadcaster.

As for the Halifax-based CBC news comedy show that this year marks its 25th anniversary, I was bedazzled by the production, especially the “Talking to Americans” segment masterminded by Rick Mercer. Every time I watch a clip of Sarah Huckabee Sanders — Donald Trump’s current press secretary — I’m reminded that Mercer, in 2001, punked her father, then Arkansas Governor Mike Huckabee, into congratulating Canada on “preserving its National Igloo.”

Mercer recalls the hilarious prank in 25 Years of 22 Minutes, an oral history of the show by local writer Angela Mombourquette. “That one was a game-changer,” Mercer told the author. “We just went in and talked our way all the way up! And we were terrified, too, because there was a chain gang outside.”

Mercer parlayed his success on 22 Minutes into The Rick Mercer Report, which is now in its final season, by Mercer’s design. In her absorbing release, Mombourquette, a journalism instructor at the University of King’s College, explores the evolution of one of the most popular homegrown television shows in Canadian history.

“(It) has endured crises, cast changes … and bears little resemblance to the show as it was conceived a quarter century ago,” Mombourquette writes. In intriguing passages, she also reveals that after months of negotiations with DHX, the Halifax media conglomerate that owns 22 Minutes, company officials decided not to support her book.

Translation: Readers will not find the voices of current cast members in the volume. No biggie. Mombourquette forged ahead and delivered a book that stands as a shining testament to the many “behind-the scenes” figures who’ve made the show tick for 25 years. Among them: writers, show-runners, camera operators, producers, set designers, and program directors.

Moreover, the author had already completed an interview with Mercer when DHX declined to cooperate in the project. “Rick is a generous, authentic guy and a super storyteller,” Mombourquette told me. “I called to set a date with him and it became ‘let’s do it now.’”

“I had just started simmering a big pot of tomato sauce,” she continued. “Three hours later, when our call ended, I had the most amazing spaghetti sauce because it had simmered so long.”

Gerald Lunz, Mercer’s long time partner (in business and in life), also reminisced with the author. The first creative producer of 22 Minutes, Lunz recalled the spectacular ascent of the show. “I think within a year, we had over 1 million viewers. And then over the next three years it built to 1.4, 1.5 — just crazy stuff.”

“For CBC, their ratings benchmark is probably still a million,” added John Doyle, chief television critic for the Globe and Mail. “That tells you that the show is having a real impact.”

As for the continuing success of This Hour Has 22 Minutes, two themes emerge from Mombourquette’s rollicking read: The “outsider” perspective of the show’s cast members (past and present) such as Mercer, Mark Critch, Cathy Jones, Susan Kent, Shawn Majumder ,and Mary Walsh, who all hail from Newfoundland.

“Newfoundlanders have a particular relationship with Canada which is unlike the other provinces,” noted former producer Geoff D’Eon. “This troupe of Newfoundlanders was not deferential in anyway to anybody. They were saucy.”

Henry Sarwer-Foner put forth another geography-related factor: “I think the show was lucky to be based out of Halifax,” the former director said. “We were kind of left alone. … And with no time for network notes [from Toronto], we could basically do whatever we wanted.”