You are here: Home / Featured / 14 new cases of COVID-19 announced in Nova Scotia on Thursday, June 17 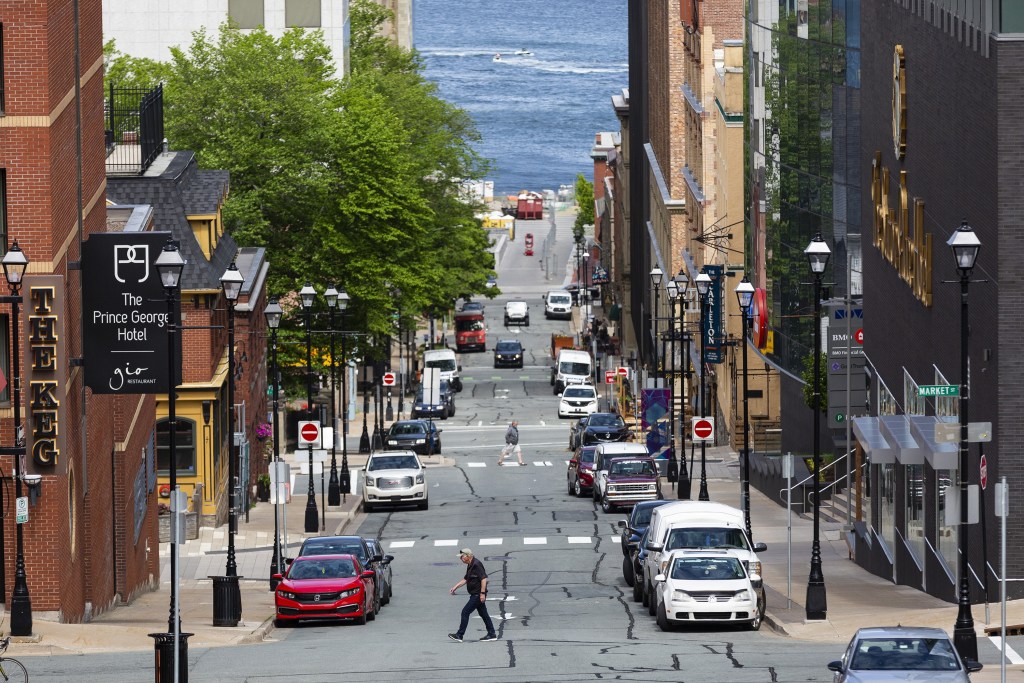 Twelve of the new cases are in the Nova Scotia Health’s Central Zone — 11 are close contacts of previously reported cases and one is under investigation.

There are now 97 known active cases in the province; six people are in hospital with the disease, three of whom are in ICU; 9 people are considered newly recovered today.

On Wednesday night, Nova Scotia announced a new school-based case connected to Prospect Road Elementary in Hatchet Lake. That school will be closed to students until June 21.

During Thursday’s COVID-19 briefing, Chief Medical Officer of Health Dr. Robert Strang said there has been no further spread, to his knowledge, related to the government’s school-based case mistake earlier this week.

“The mistake was that we, late in the evening had identified and we weren’t able to validate the right name of the school, but since then all the right things are happening with the school, communication to the school community, and no additional cases at this point, that I’m aware of, have been identified,” Strang said.

The Nova Scotia Teachers Union issued an op-ed on Thursday calling on the province to apologize for the mistake:

The failure to close the correct school sent students and staff at SJAM back into a building where no deep cleaning had been conducted, resulting in several hours of potential exposure before contact tracing had been completed.

As the day proceeded, students and staff identified as close contacts were pulled, in real time, from their class, while those remaining in those classrooms looked on and left to wonder whether they were next. One can only imagine the fear children and staff in that position experienced as a result.

Staff and students not identified as close contacts were kept in the building for the remainder of the day in cobbled together groups, violating the supposed protection of cohorting/class bubbles, rather than seeing the entire school closed until a deep cleaning could take place over two days. SJAM parents received notice after lunch that the wrong school had been closed. Many had to leave work on short notice to pick up children identified as close contacts.

School staff were placed in the impossible position of having to communicate with families about an error they were not responsible for and answer pointed questions without having the information or details to address parents’ legitimate concerns for the safety and health of their children.

Meanwhile, as all this was happening, families at Joseph Howe were not updated for much of the day, were left scrambling to find child care and book urgent COVID-19 tests. I’m certain they felt a deep sense of relief when the mistake was finally corrected.

Asked whether there has been any spread in schools since they reopened, Strang said there has, but it’s been limited.

Much of Thursday’s briefing was dominated by questions about New Brunswick’s move to open up to travel from people outside of the province (with proof of vaccination) on Thursday morning, well before Nova Scotia’s plan to open to the other Atlantic Canadian provinces on June 24.

Premier Iain Rankin said the decision took him by surprise.

“I hope to have strong border control as they start to open up earlier than the rest of Atlantic Canada. It was my view that we could have had free travel throughout the Atlantic region, with no restrictions in place. And that was an agreement of three out of the four [Atlantic] provinces,” Rankin said.

“Unfortunately, I was surprised that their risk tolerance is different than that. So we’ll be prepared by June 23 when we open up. We’re discussing now what measures we’re going to need to have in place.”

Rankin said he was meeting with Atlantic premiers Thursday night and they’d be discussing vaccine passports.

Nova Scotia currently plans to open to the rest of Canada July 14.

Here are the daily new case numbers and the seven-day rolling averages (today at 8.6) since March 28, the last day Nova Scotia had zero new daily cases: 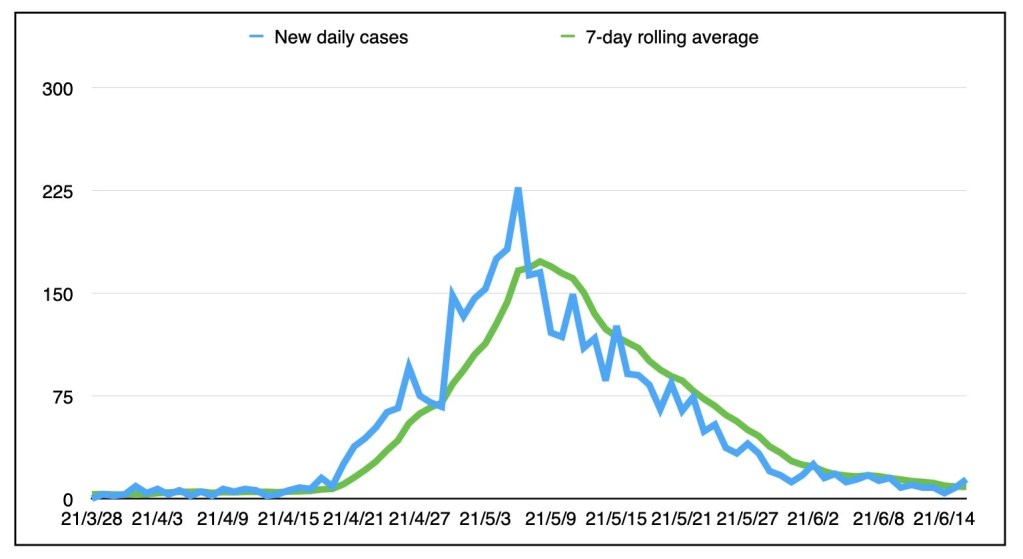 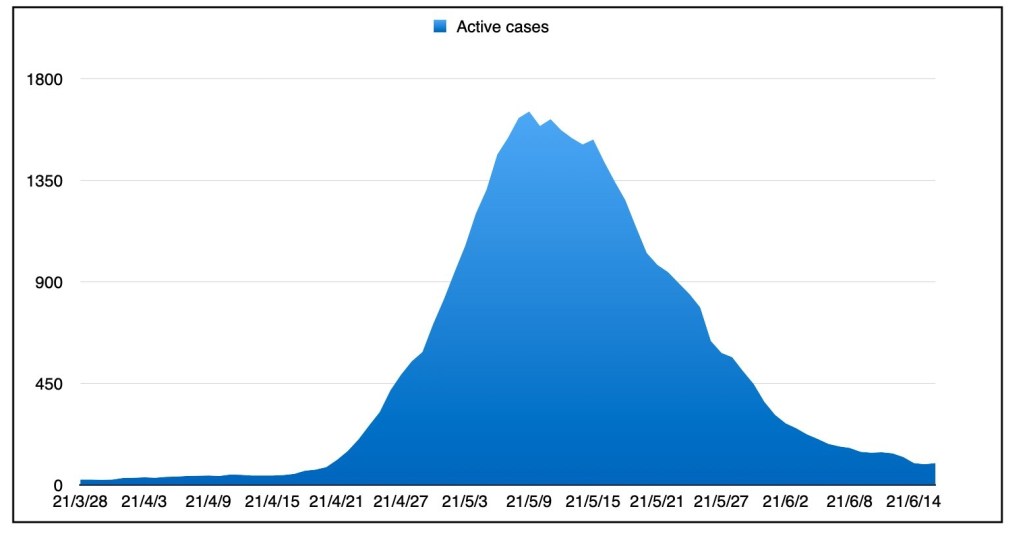 Yesterday, 19,938 doses of vaccine were administered; a total of 735,008 doses have been administered; of those, 66,248 were second doses. As of end of day yesterday, 68.8% of the entire population has received at least one dose of vaccine.

Strang said Thursday that Nova Scotia is on track to get 75% of the population fully vaccinated much earlier than originally planned — by early to mid-August, rather than October.

On supply, Strang said there is a decrease is the expected supply of Pfizer over the next month, but there is an increase in the supply of Moderna. He urged people not to wait for a specific vaccine for their second dose, but take whichever one, Pfizer of Moderna, they can get first. 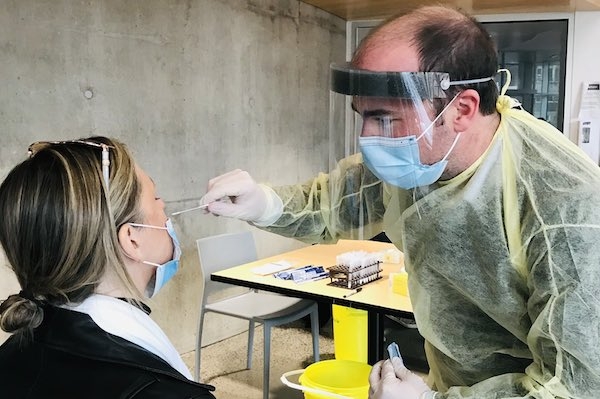 A woman gets swabbed at one of the rapid testing sites. Photo: Lisa Barrett

Nova Scotia Health labs completed 5,977 PCR tests yesterday. This does not include the antigen tests administered at the rapid-testing pop-up sites.

Anyone who worked at or visited the following location on the specified dates and times should visit covid-self-assessment.novascotia.ca/ to book a COVID-19 test, regardless of whether or not they have symptoms. You can also call 811 if you don’t have online access, or if you have other symptoms that concern you.

Regardless of whether or not you have COVID-19 symptoms, any passengers who were on the following transit routes for at least 15 minutes on the named dates and times are required to self-isolate while waiting for their test result. If you get a negative result, you do not need to keep self-isolating, however, you are asked to get retested 6-8 and 12-14 days after this exposure. If you get a positive result, you will be contacted by Public Health about what to do next.