You are here: Home / Commentary / What’s environmentally wrong with clearcutting? 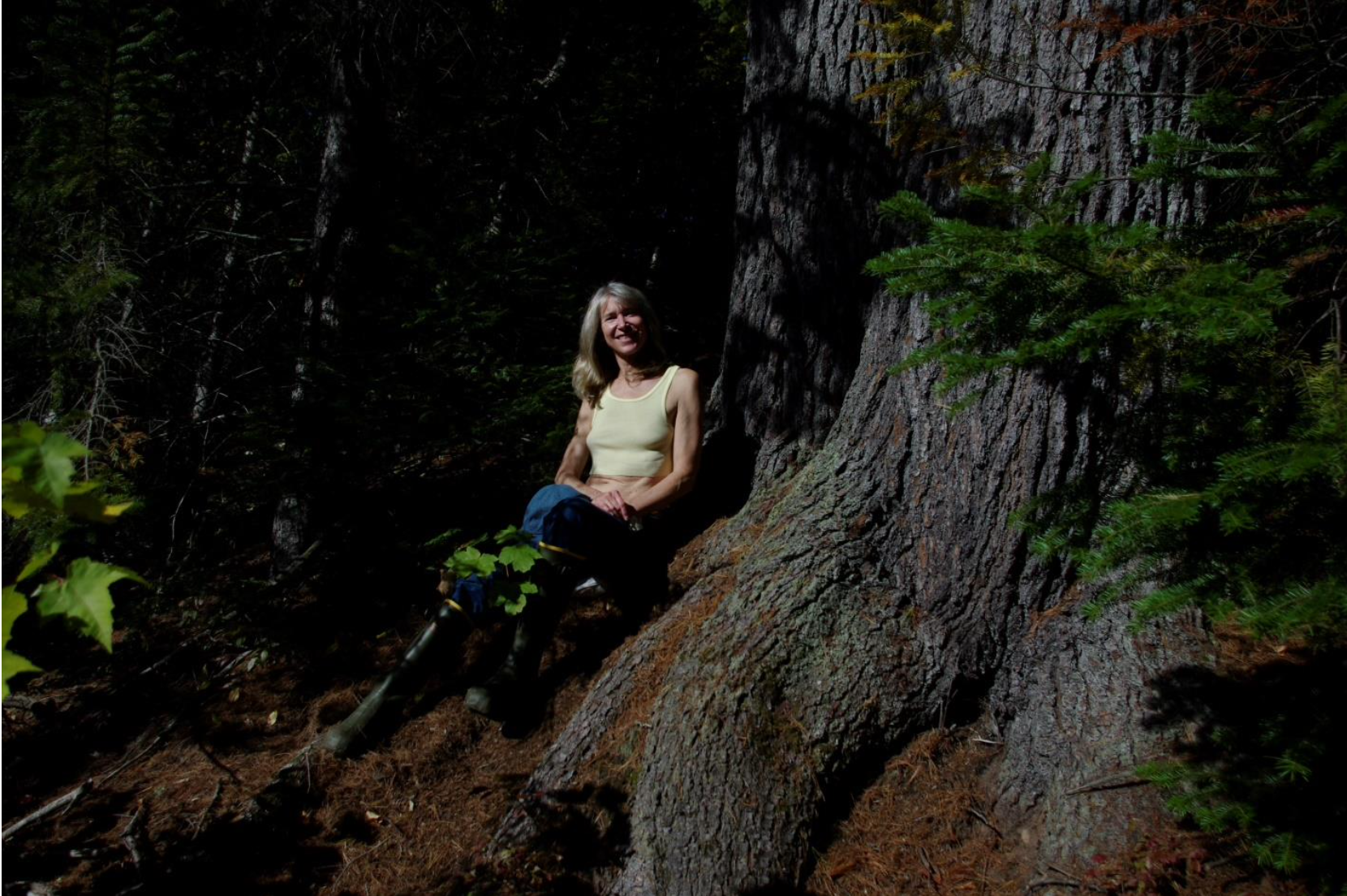 Alice Reed beside white pines that have become elders.

Classified as “Acadian,” most naturally-growing forests of Atlantic Canada contain a broad mix of trees with leaves (hardwoods) and with needles (softwoods). Each tree species has preferences regarding soil, moisture, and available light. Young sugar maple, yellow birch, hemlock, red spruce, and others can grow on the forest floor in the moisture and shade found under taller trees. Eventually an old tree falls, and a young tree takes a growth spurt in its place. Trees that grow in forest shade may live as long as 450 years and eventually become the dominant species. The wood of these species has more economic value for humans.

Fire was historically rare as a large-scale environmental disturbance in most forests of New Brunswick, Prince Edward Island, and Nova Scotia. “Fire histories” can often be traced to early logging practices and land-clearing by settlers.

Trees obtain nutrients from soils that have been accumulating organic material since the last ice age about 11,000 years ago. With repeated wood harvests and acid rain, these soils are becoming severely depleted.

Needles and leaves on living trees act like solar collectors, producing energy for the tree. Favourable site conditions and room for roots in the ground give each tree a chance to thrive. On hot, sunny days a healthy forest offers shade and keeps water cool in the forest floor. One tree can have the cooling effect of 10 home air conditioners operating 20 hours per day.

Forestry in eastern Canada became a force in the 1700s. Land clearing for settlements and farms, shipbuilding, and lumber exporting began making significant changes. Enormous white pines were marked and reserved as masts for English sailing ships. In the 1800s, sawmills used vast amounts of original Acadian forest hardwoods and softwoods. Some 300 years and repeated harvests later, those same sites are being swept clean for pulp, lumber and/or biomass. For centuries wood “biomass” was burned in homes for heating and cooking. Lately the term biomass has been expanded to include wood processing by-products, such a sawmill wastes, and the cutting and burning of forests to produce electricity. 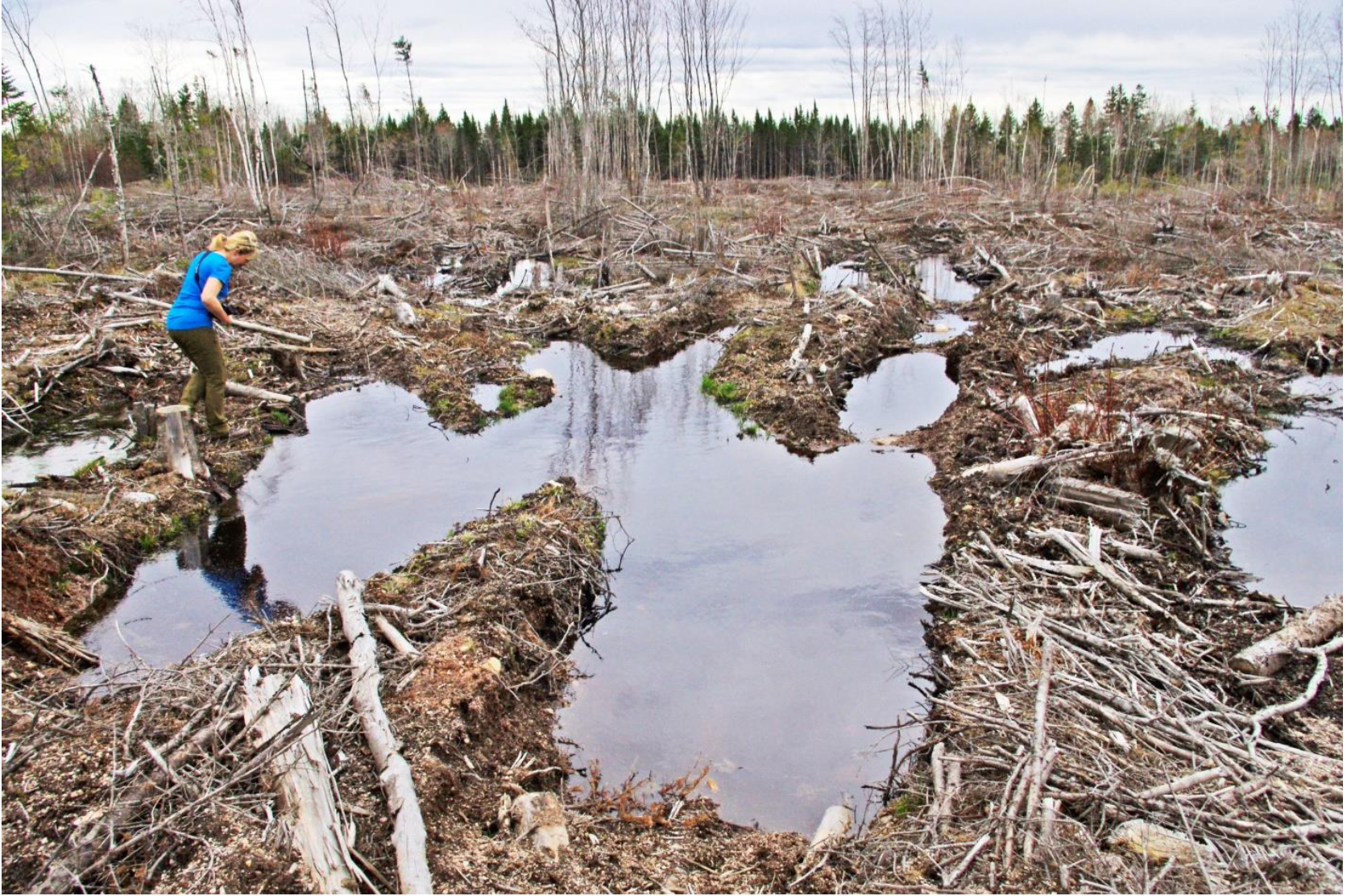 The industry-preferred, cheap harvest method is clearcutting. A clearcut can be defined as a site where most of trees have been removed in one operation, leaving a large, open area that no longer has the forests’ protection from high temperatures and drying winds. The Department of Lands and Forestry defines it as “a harvest, after which less than 60% of the area is sufficiently occupied with trees taller than 1.3 metres.”

The spread of clearcutting over eastern landscapes holds many dire environmental consequences for soils, wildlife populations, waterways, climate, and humans. Leaving thin ribbons of trees along waterways and occasional, see-through clumps of trees on the landscape does not maintain an ecologically healthy environment. These “left-overs” do not shade the ground sufficiently and often blow down.

1) Clearcuts encourage short-lived and “open ground” suited seedlings of species like poplar, wire birch, fir, and white spruce to take over. Sure, something grows back — but not the same forest. Nature attempts to heal with grow-fast, die-fast species.

2) The resulting forest is even-aged, has fewer tree species and more vulnerability to insect and disease damage. 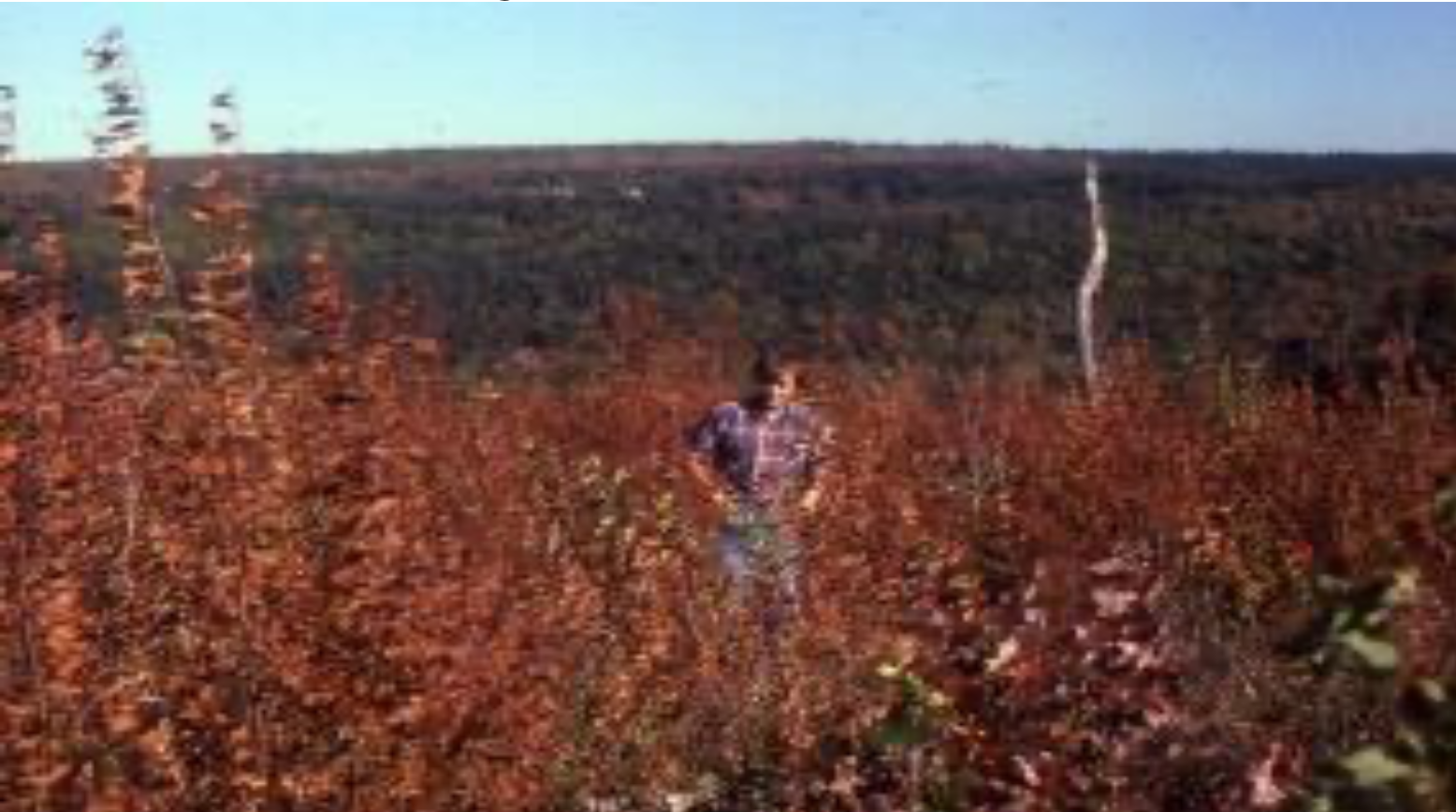 3) According to the forest industry, forests that grow in on clearcuts often require herbicides to kill hardwoods that impede softwood survival. This idiocy has been taxpayer-subsidized for decades. The pulp industry wants softwood forests, but their needles make soils acidic. On the other hand, hardwood leaves improve soil fertility and provide wildlife food.

5) Clearcuts make soil nutrients vulnerable to erosion from wind and rain. Nutrients important for tree growth (like phosphates and calcium) are taken away with the harvested wood, washed out of the soil or blown away on the wind. Nutrients available for new tree growth are squandered away from the site.

6) During droughts, forest soils can regulate stream flows by gradually releasing water into brooks and rivers. Clearcut brooks flush like toilets after heavy rainfalls, drying up in summer with widened, eroded channels. That difference can mean life or death for salmon and trout, frogs, and other aquatic life. Humans also need cool, clean water. 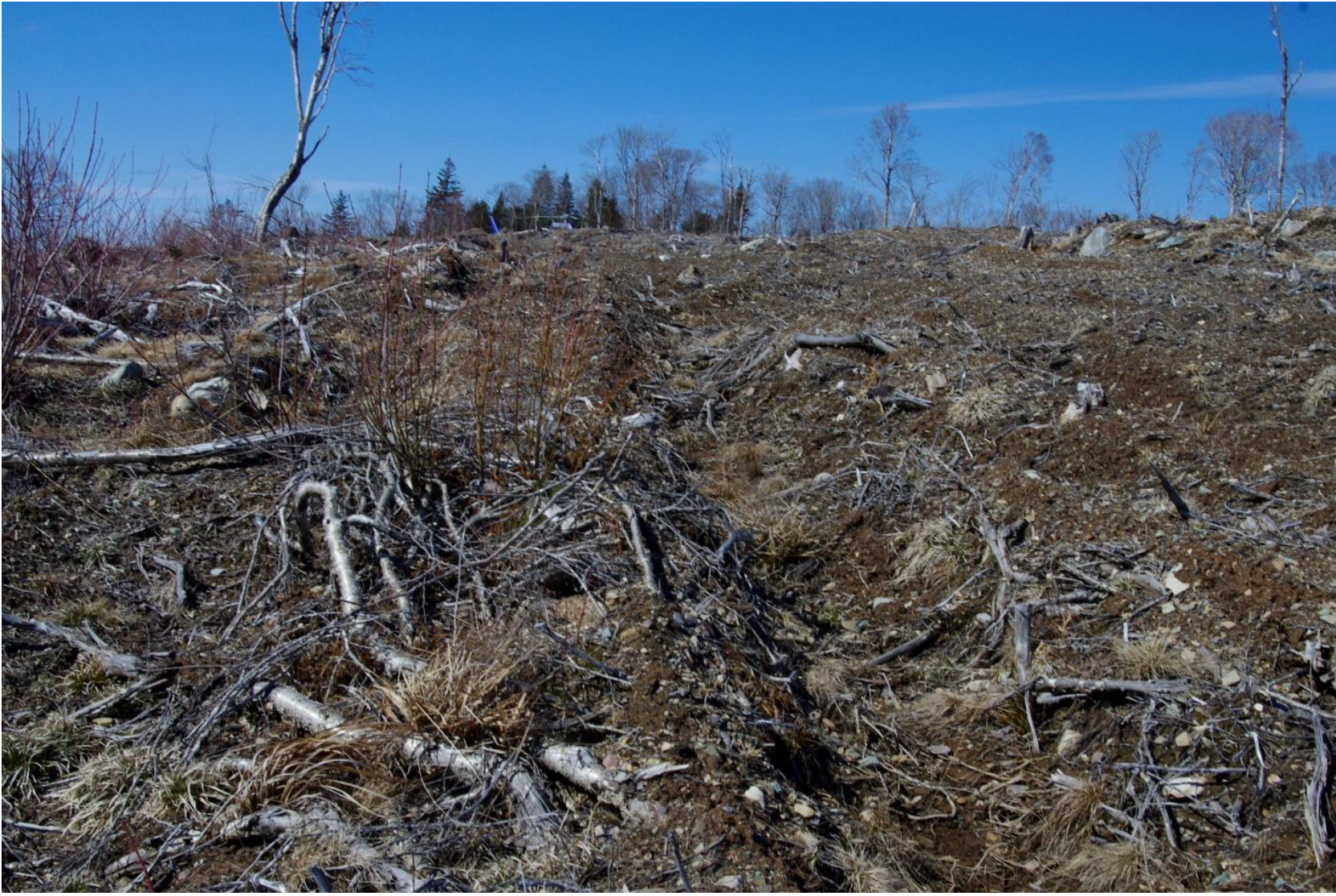 This public land beside Square Lake, near the eastern shore, was cut by Northern Pulp. It was known habitat for three endangered species; boreal felt lichen, Canada warbler, and mainland moose.

7) Erosion from clearcuts washes silt into brooks and rivers, filling spaces between rocks where aquatic life takes refuge. It smothers trout and salmon eggs that are laid in autumn and overwinter in gravel bottoms. The legislated 20- 30-metre-wide buffer zones to protect waterways and adjacent lands are grossly inadequate. Silt keeps flowing into brooks, filling in ponds and onward to the sea. 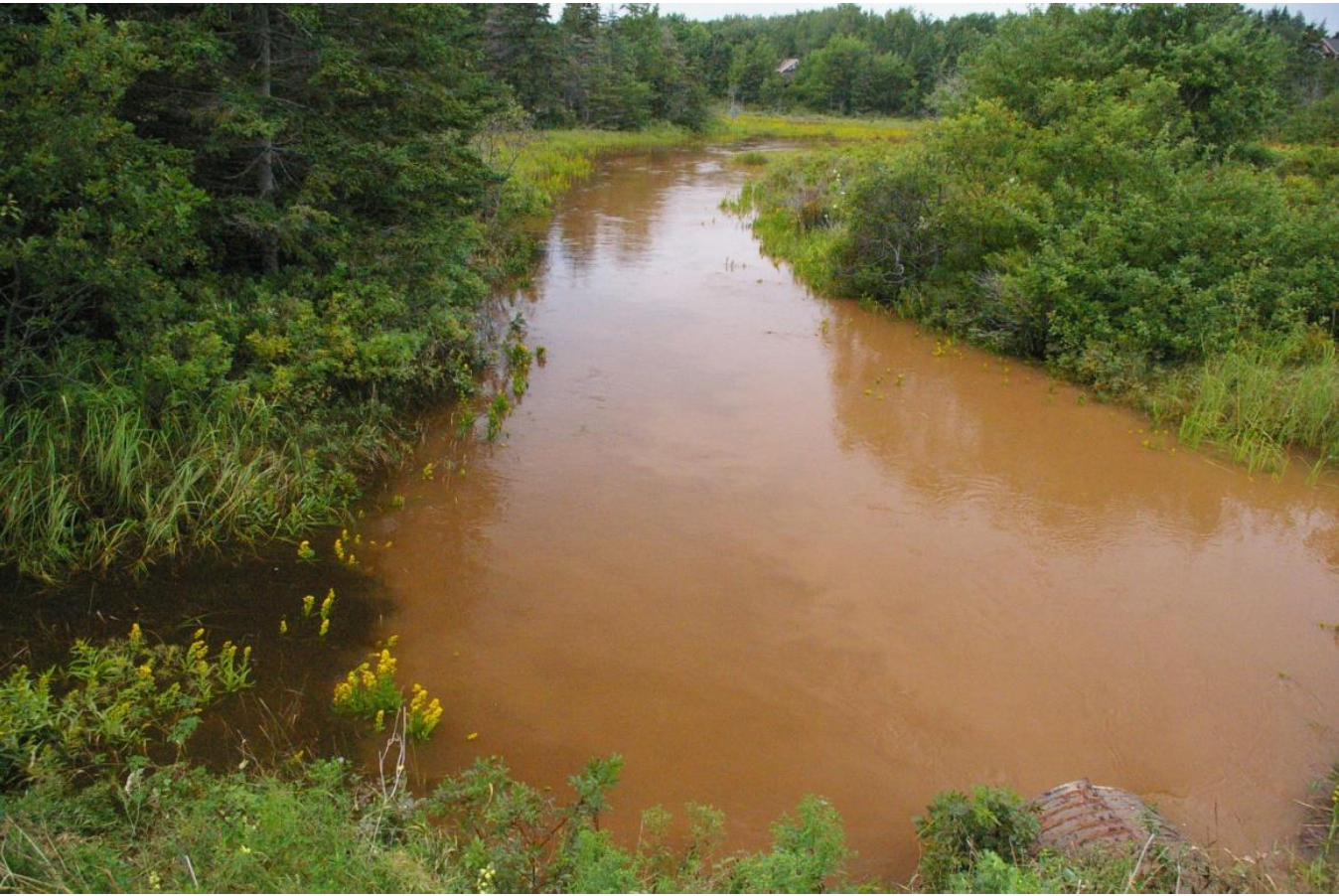 A clearcut that filled in ponds, clogged spawning habitats and carried silt to Pomquet Harbour. No charges by any agency were laid.

8) The hot, dry conditions on clearcuts kill small soil inhabitants that can break down and recycle forest nutrients from dead wood. Those conditions and 40-year cutting rotations that create moonscapes prevent long-lived Acadian tree species from returning. Once those seed sources have disappeared, these trees cannot return.

9) Trees growing in over soil-depleted clearcuts produce meagre amounts of food that white-tailed deer or moose will use. Sprouts on red maple stumps do not hold the nutrition value of a twig that grows from seed.

10) Many habitats essential for the survival of a wide variety of wild animals, plants, and lichens that are found in Acadian forests are missing in “forests” that grow in on clearcuts. Barred owls, for example, nest in big trees with a large hole. They rarely find such a large tree now. Residents displaced by clearcutting also hardly ever find a nearby “vacant” forest. They become homeless refugees.

11) “Biomass” once referred to leftovers from forest operations. Now it’s a sought- after commodity. Clearcuts are being “cleaned up” for it, leaving even less dead woody material in soils to grow more trees. Pulp companies normally cut softwood forests and mixed wood (hardwood and softwood) forests to make their products. Now hardwood forests are being flattened for biomass burning, often with taxpayer subsidies. Producing electricity by burning wood is less than 30% efficient.

12) Management of our Crown (public) lands once had some oversight by government foresters. Now the government is turning public land forest management over to the forest industry. The foxes are guarding the henhouse?

There are alternate ways to harvest that allow nature to grow healthy new Acadian forests. Trees are removed using “partial harvest” methods that mimic natural gaps in the forest canopy, creating a more suitable environment for long-lived species of hardwoods and softwoods. Such harvests can maintain most forest communities of wild plants and animals. To be healthy, nature needs ecologically sound forest management on at least 60% of the forested land base. These should be designed to offer wildlife corridors, forested connections between protected lands.

Many insist that clearcutting the forest every few decades is no problem; that it will magically re-appear. In New Brunswick and Nova Scotia, plans are underway to increase harvests over larger land bases and channel more of nature’s energy into fewer tree species, ignoring the degrading, ecological consequences this will have for wildlife and nature as a whole.

Acadian forests represent a diverse portfolio of stable ecological investments. They have, to use a banking term, “accrued interest and capital.” The current practice of clearcutting mixed Acadian forests does not sustain them. It degrades them. We’ve allowed too many withdrawals from the soil account.

Human greed for forests is exceeding nature’s abilities. Our forests need to be rehabilitated before the land deteriorates to scrub or heath. Once a forested country, Scotland now has only 16% of its land base in trees, with much of that percentage in plantation.

For the health of the land, forestry planning needs to become more in tune with nature’s ways, instead of overpowering it. It’s time for woodland owners, First Nations, scientists, naturalists, river associations, fish and game groups, boaters, watershed associations, and people who just love the woods to stand together for more ecologically-healthy, working forests.

Research in Germany over several centuries has proven forest plantations to be a long-term fallacy. Yet the NS government and the forest industries in NS and NB persist in using public land and the public purse in this “fight nature” endeavor. 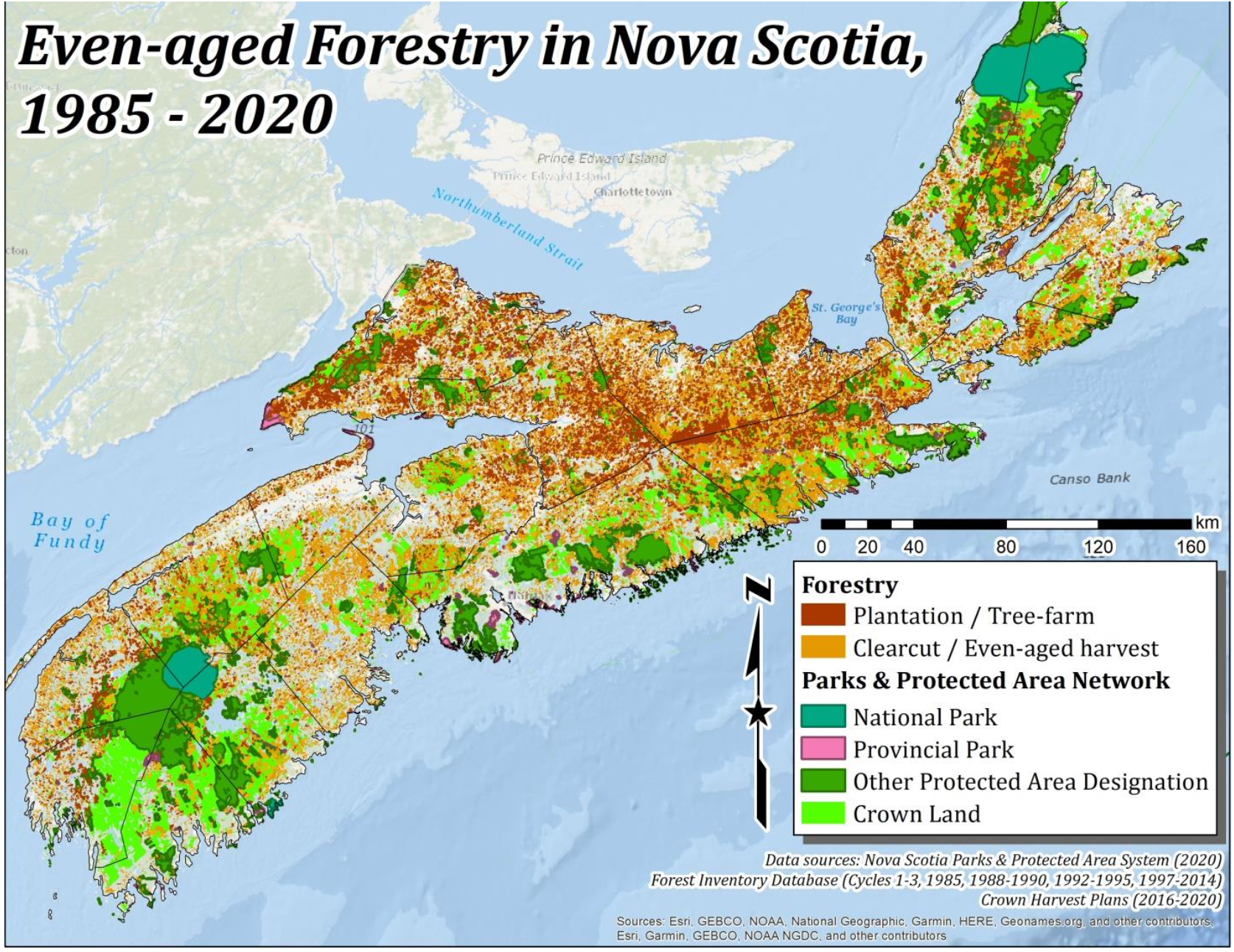 Brown & yellow areas add up to roughly half of NS’ forests clearcut in 35 years.

Public land management should be subject to public interests, rather than producing quick profits for private industries.

We elect the politicians. They could stop this plundering.

Bob Bancroft is a wildlife biologist and the current president of Nature Nova Scotia.