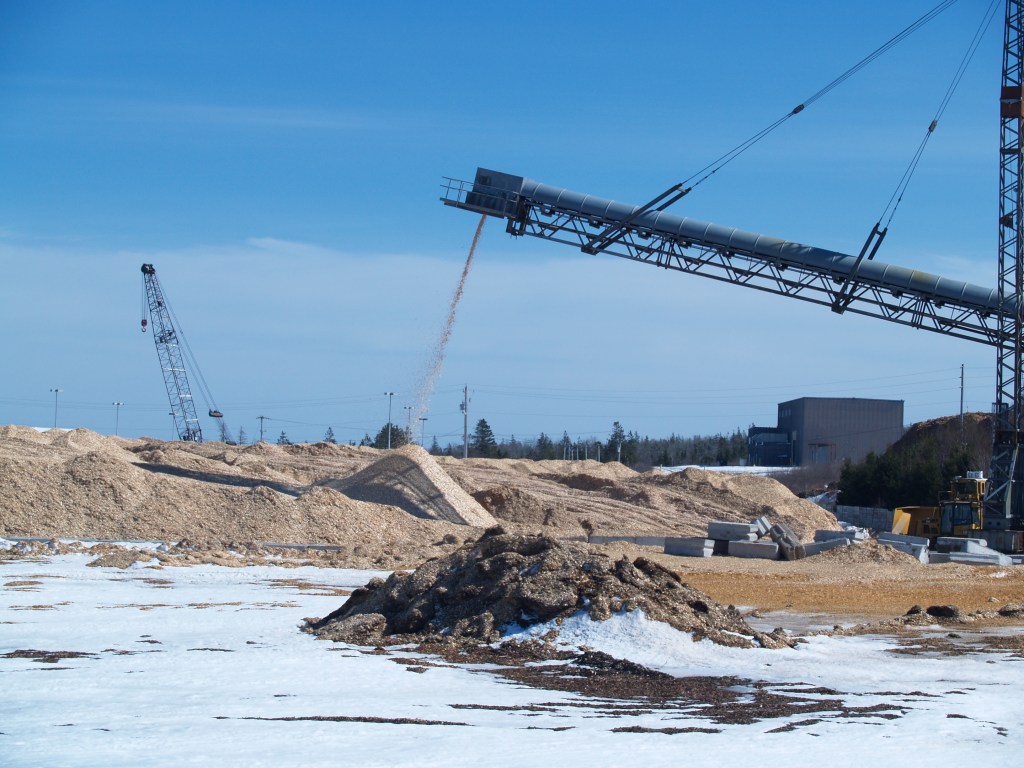 According to Marine Tracker — and apparently unbeknownst to the provincial government — Nova Scotia is now exporting wood chips to China, something that’s new for 2019.

The “wood chips carrier,” the FP Wakaba, loaded up with chips and left the port in Sheet Harbour Nova Scotia at the end of August. With a transit time of about 50 days, and travelling a total distance of more than 35,000 km (or 19,000 nautical miles) the vessel is expected to dock on the shores of the Yellow Sea in the port of Rizhao, China sometime around October 16. 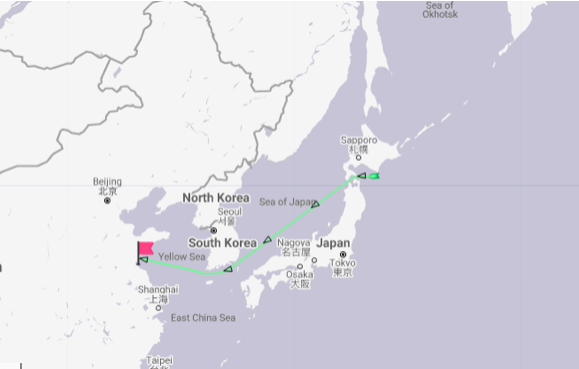 Screen shot of the FP Wakaba entering the Sea of Japan, on October 13, 2019, not far from its final destination, the port of Rizhao, China. Marine Tracker.

The port at Rizhao mainly deals in soybeans, dried tapioca chips, maize, wheat, and wood chips. According to the port’s website, it’s one of the largest berths for handling wood chips, and its main customers are pulp and paper companies.

And that’s puzzling because Statistics Canada trade data, which I reported here indicates that while shipping of pellets and wood chips out of Nova Scotia ports has been pretty steady over the last few years, China has never been an importer of this province’s chipped trees. 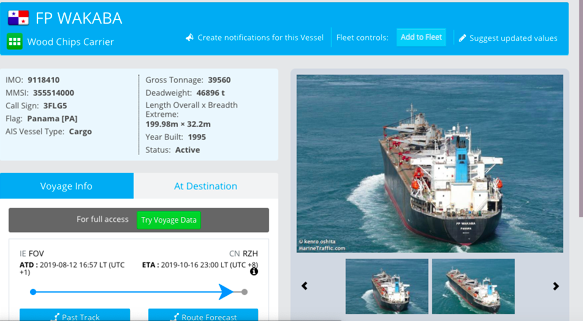 Screen shot of the FP Wakaba, from Marine Tracker.

But a recent tariff dispute  could be changing that. As of this past summer, the US had placed 25 percent tariffs on $250 billion in Chinese imports and threatened to tax another $300 billion. In retaliation, China imposed a 25% tariff on $60 billion worth of US products, including a very long list of wood-based products, paper products, and raw wood materials, including wood chips. It’s estimated that wood exports to China from the US have dropped by 42%, as a result.

But China still needs wood, and lots of it, and it looks like some of it is now coming from Canada.

According to Tracy Barron, media relations with the province’s Intergovernmental Affairs — which is who the Department of Lands and Forestry referred me to — China is Nova Scotia’s second largest trading partner. It was frustrating corresponding with Barron, who didn’t seem able to answer my question about whether the export of wood chips to China was new or if it had anything to do with the tariff dispute between China and the US.

“We continue to foster and expand our trade relationship with China as outlined in the Nova Scotia – China Strategy,” she writes in an email. “In 2018, we exported $793 million worth of goods to China compared to $602 million in 2017.”

Yes, but what about the wood chips?

Barron says that while Nova Scotia is Canada’s top exporter of wood chips — in 2018 it exported $20.8 million worth, up 11% from the year prior — China isn’t usually its customer. Australia is the main source of China’s wood chip requirement for pulp production, she says. But Nova Scotia’s primary forestry export to China is wood pulp. It’s our number two export to China, after seafood, with exports valued at $197 million in 2018.

Ok, but I had to ask it again. Is China a new customer for the province’s wood chips, because there’s a ship headed to China right now from Sheet Harbour that’s carrying wood chips. Are you sure NS doesn’t export wood chips to China?

“PULP has been our number two export to China, not wood CHIPS. We do export word CHIPS, but as of 2018 China has not been the market. So if wood CHIPS are being sent to China, that is new in 2019. We have always sent wood PULP.”

Does the tariff dispute between China and the US have anything to do with this new market for Nova Scotia wood chips?

Barron says Intergovernmental Affairs “looks at export trends and opportunities in general, but we couldn’t comment on the trade actions of other countries that do not directly involve us.”

Great Northern Timber (GNT) is one of the province’s largest exporters of primary wood products, mainly dealing in hardwood chips and biomass. It’s part of the Westfor consortium — a group of 13 mills that jointly hold one western Crown harvesting licence. GNT has hardwood pulpwood allocations on Crown land and sends shiploads of hardwood chips and pellets from the ports in Halifax and in Sheet Harbour to Europe and elsewhere. On the company’s web site a video of in forest chipping shows how the trees are cut, chipped and loaded into trucks destined for the shipping terminal in Sheet Harbour.

I contacted GNT to confirm that the chips shipped from Sheet Harbour to Rizhao, China on the FP Wakaba originated from its facility and if so, if the new Chinese market was a result of the trade dispute south of the border.

I have yet to hear back from the company.

What is most concerning is whether a market as gargantuan as China’s will just put more pressure on forests that are already degraded and devalued.

As previously reported, forest stands in Nova Scotia are being cut on shorter and shorter rotations, and the only way this could be commercially viable is for there to be a market for the younger and smaller hardwood trees that make up a high percentage of the stand. These are precisely the kinds of trees GNT relies on to supply its chip and biomass export markets.

We also know that clearcutting on short rotations results in a decline in site productivity, and therefore more low-grade forests. It’s a subject I reported on here,  and found that as lumber recovery diminishes the chip production goes way up. This all just points to a situation where increasingly degraded forest stands are being converted mostly to chips, and therefore a market for what is becoming more of a “product” than a “byproduct” is required.

The new demand from China for wood chips and perhaps other forest products, if it’s sustained at all, will affect the forests themselves. Exactly how much is anyone’s guess.