You are here: Home / Commentary / The Macdonald Bridge “Blanket Girl” speaks: I’m 17 years old, and people are threatening to kill me 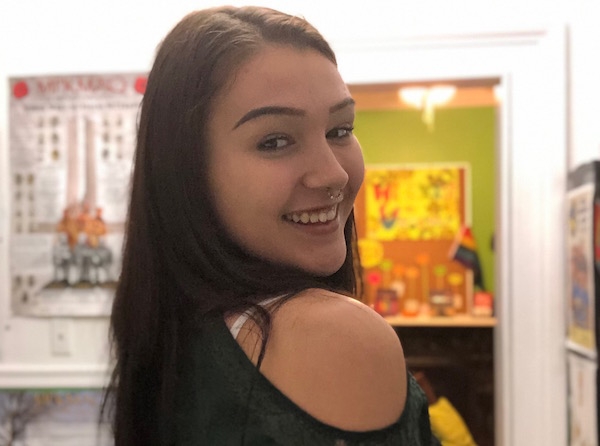 My name is Kyra Gilbert. In the last couple of days I’ve been introducing myself to people as “blanket girl.” It’s not really funny, but I feel like saying that gives me some power over my own story. That’s how people see me now. I’ve been made into a meme, and a lot of people have something to say about this stereotype they have of me.

But I’m not just a video, or a meme, or a story on the internet. I’m an Indigenous girl who fights to protect the water.

I’ve been doing it since I was 13 years old. My mother is Darlene Gilbert. She is a water protector. She introduced me to the Treaty Truckhouse and told me about what Alton Gas was proposing. Even though I was always around my mother, because I was such a young age I didn’t fully understand. I was supporting and helping but I didn’t really know what it was about. I never really fully knew why I was fighting for the water until I was 15.

Alton Gas is a company proposing to build salt caverns in the Shubenacadie River and put massive amounts of brine into them. They say it won’t contaminate the water, but the whole purpose is to get the gas flowing. As soon as it happens, it will affect the aquatic life. It’s going to poison the water for everybody.

There’s going to be a day when there’s no water. Nobody sees that future except for the people who are fighting to save the drinking water.

I stepped into my community and started helping. I met a group of elders, and we had a sacred fire where we would sit and talk. I remember that year we were trying to build a raft to go to this island we call Treaty Island. We were just doing different things to fight the gas company.

Throughout the years, I was taught a lot more about what Alton Gas was proposing and what was going to happen in my future. I’m young, and I’m still learning more. A couple of months ago Ellen Page came out with her documentary and I learned about Boat Harbour and Pictou Landing. I’m a youth, and that’s affecting my future.

My ancestors have been on this land from the beginning of time. So this is a very sacred place, and of course it’s unceded Mi’kmaq territory.

When I was 16, my mom got arrested. My aunt Madonna and her girlfriend Paula also got arrested. We had built another house in front of the gates of Alton Gas. This was about two years after the treaty Truckhouse had been standing and we decided to block the entrance to the site. The house was made out of straw bales. There was a lot of time and work and love put into that house.

My mom was standing on the property trying to keep the house standing and fighting to keep Alton Gas out. It was a peaceful arrest, but there was a lot more attention put onto Alton Gas after that.

And after that I felt like I had more of a job to do as a youth. I couldn’t just stand here and let my mother go through this alone. So I started stepping up to the plate going to more protests. I was going to more events for Alton Gas, and going to court, and things like fundraisers to try to stop Alton Gas because we have treaty on that land.

I went to the climate strike with the organizers Julia, Emma, and Willa. They asked me to do a speech on the way I felt about fighting for the water. I talked about why I was fighting and why I do what I do and why everyone should be aware of that.

I spoke in front of 10,000 people and I felt very empowered. I had never done anything public like that before so it was a big thing for me to get my voice out there.

Before I went to the bridge protest, I expected to just be walking across the bridge. When we got to the bridge there was a chain of cops blocking it off. They shut down the pedestrian and bike lanes too. A lot of people are really angry and frustrated with us about that, but we never closed those lanes.

We were there for about an hour and then I heard this woman giving an interview to the media. She was complaining about being late for work. There was a group of people talking to her and they were getting frustrated because there was a lot of back and forth. A young man was talking to her and he told her she wouldn’t be so late to work if she didn’t stop for an interview. She didn’t have a response. Actually, her response was a middle finger. I walked over there and that’s when the video starts. I asked her why she stopped for an interview if she was going to be late and she told me our protest was stopping her from getting over the bridge but of course that wasn’t our fault. And because I was frustrated I said some things out of anger, and I have to live with those words. Like I said, I’m still learning lessons every day.

The backlash I’ve been getting from the video that was posted is unreal. I’ve had death threats and I’m still only 17 years old. I could be the daughter of a lot of the people who are commenting. The hate that is being put into that is really hard to even comprehend.

I have learned my lessons. There are things I wish I hadn’t said in the heat of that moment, but I’m not ashamed of being there and of speaking up. And I understand if people have feelings about that. But that still doesn’t give you the right to threaten to kill me.

It’s hard for me to even wrap my mind around what people are even saying because there’s so many people coming at me.

They don’t know who I am and what I’m about. There’s some good messages from people, but it’s mostly hate.

I do feel like the video was taken out of context, but I also know this isn’t just about the video. And it’s not even really about me. People need to take anger out on someone, and as a young Indigenous girl I think I represent things that they feel angry about.

People can see a meme if they want, or they can see that a young girl is able to speak up for what she believes in. They can appreciate the fact that I’m so passionate when so many people aren’t. That I’m able to stand with my people and for my people. I’m proud of all of those things.

And people should realize the damage to them and their water if Alton Gas ends up going through with their plan. I was there at the bridge to get people to make decisions. The plan was to get people like Justin Trudeau and Mayor Savage to make changes. If everyone who sent me a message would also send one to them, then maybe there would be some action.

I want all girls and young women to know that you can speak out for what you believe in. I want people to know that sometimes when you’re fighting you don’t do everything perfectly, but you can still stand up. I want young people being bullied to know that even when you go through something like I’m going through now, you can go and hide and let the hate get to you, or you can keep holding your head up high.

I’m a young woman who fights for my community, for the water, and for your future.

And I’m not going to stop.