You are here: Home / Education / The downward trend in walking to school 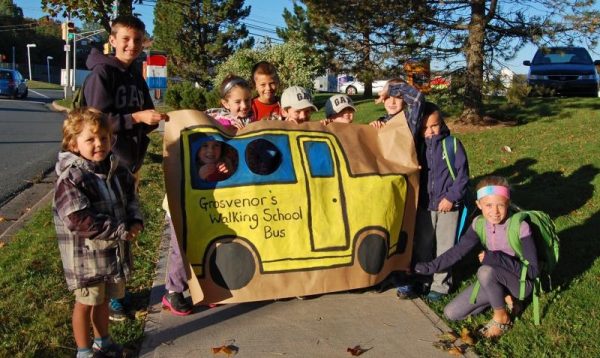 Halifax’s kids head back to school this week, but sadly too many of them will be taking the least healthy option to get there.

Walking and biking to school have been on the decline across North America for decades. Check out these numbers from the US, showing the drop since 1969. Note that while bussing stays nearly constant, the proportions of kids walking and being driven has almost flipped, and for the worse. 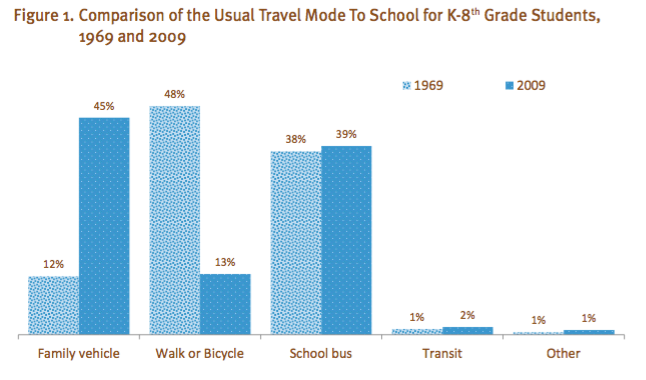 The negative effects of this trend are multiple: fewer active kids, worse rush-hour traffic, and more greenhouse gas emissions. It’s what you might call a lose-lose-lose situation.

In Nova Scotia, communities vary from 15-20 per cent of kids walking to school. At least that’s what Janet Barlow told me last year, right around the time the provincial government was cutting funding to the EAC’s School Travel Planning program, where Barlow worked.

The School Travel Planning program was aimed squarely at getting kids out of their parents’ cars every morning and afternoon. Two staffers, one in Halifax and one in Sydney, worked with 24 schools across the province to help plan safe walking routes, lobby for trails and marked crosswalks, and create things like “walking school buses.” The beauty of the program was that it was customized to each school community, looking at specific problems and how they could be overcome. Barlow says they saw results with an average 4.5 per cent increase in active transportation at participating schools.

But in a surprise move last year, the province cut the roughly $100,000 in funding that the EAC used to employ the team responsible for school travel planning and other active transportation advocacy programs.

At the time, minister of health and wellness Leo Glavine told Metro that it was okay, because the province would be mandating physical activity for kids during school hours. I’m all for gym class, but it’s no replacement for a physically active, independence-building, daily habit of walking or biking in your own neighbourhood.  A University of Toronto research project found that even kids who walked to school were not meeting ideal activity targets, though they came much closer than their chauffeured peers.

The US National Centre for Safe Routes to School cites research correlating walking to school with a host of benefits for kids:

And that’s just the benefits specifically for the kids.  There’s also traffic congestion, air pollution, and GHG emissions to consider, which could do us all a lot of good by going down.

The EAC’s last remaining soldier in the fight to get kids walking again is Julian West, coordinator of Making Tracks, a program that teaches safe skills in walking, cycling, skateboarding, roller blading, and scootering. West says the EAC is currently waiting to hear about its application for funding to restart school travel planning, from the same department that axed it about a year and a half ago.

But the driving to school trend will take more than a single program to get turned around. We need buy-in from more than just our health departments, but also from our energy, education, transportation, and environment departments. We need buy in from our city planners and our school boards. For starters, we need to make sure our communities continue to have schools that kids can walk to. We need to design streets, sidewalks, and paths in those neighbourhoods to be as safe as possible. We need to slow down, and perhaps start enforcing those school zone speed limits with a little more gusto.

And we need to seriously consider the choice that’s facing those of us who are parents this week:  teach our kids to get to school under their own power, or strap them in and hope that the air pollution, traffic congestion, and sedentary habits we are creating don’t come back to haunt us and them.