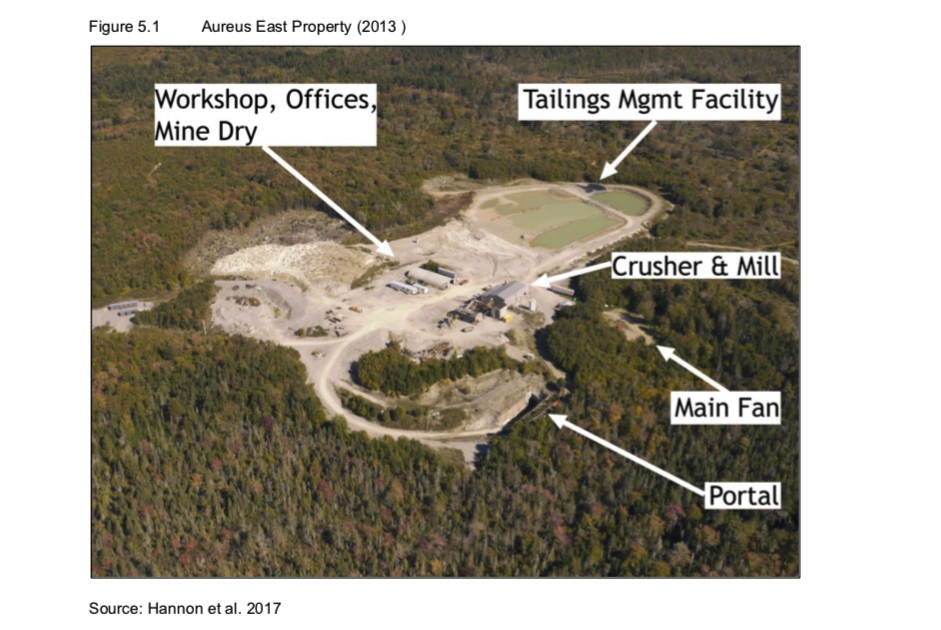 “Aurelius Minerals could end up following in the footsteps of Atlantic Gold, by proving up a multi-million ounce gold resource in Nova Scotia,” boasts the headline of a March 9 feature by Alastair Ford in the online Proactive Investors publication.

“We see the opportunity for a couple of million ounces of gold,” says Mark Ashcroft of Aurelius Minerals Inc (CVE:AUL).

He’s talking about the potential at the company’s Aureus East and Aureus West projects in Nova Scotia, Canada, where drilling last year turned up some highly attractive intercepts on both projects and also gave some indication that there could be mineralisation between the two horizons too.

“We want to be the next Atlantic Gold,” says Ashcroft, referencing the St Barbara-owned subsidiary that operates a two million ounce gold project around 60 kilometres north of the capital of Nova Scotia, Halifax.

“That’s an operation that has all-in sustaining costs of around US$750 per ounce, and produces around 100,000 ounces per year. It shows that Nova Scotia is a destination where it’s possible to do things.”

And lest investors think this is just whistling in the dark, it’s worth noting that some pretty big names agree. Sprott Resource Lending is a prominent name on the Aurelius share register, alongside Northfield Capital and Dundee. The company’s management also owns a significant stake. 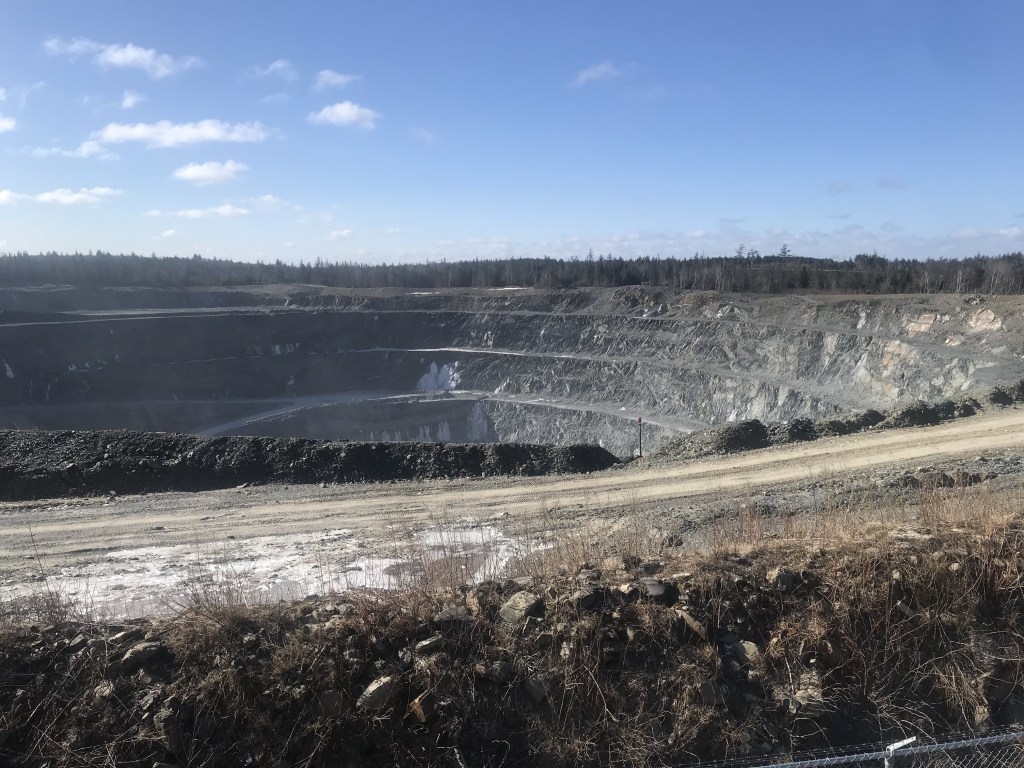 Aurelius Minerals is a Vancouver- and Toronto-based company, which calls itself is “a well-positioned gold exploration company advancing its flagship Aureus Gold properties.”

This is what Aurelius says about its Nova Scotia gold properties:

What is the Aureus East property?

But where is this “Aureus East mine” that is “one of only two permitted gold mines in Nova Scotia”?

This is what the company’s website has to say about it:

In February 2020, Aurelius Minerals Inc. (Aurelius) acquired 2672403 Ontario Ltd. (property owner, since renamed Aureus Gold Inc.) from Sprott Resource Lending for a total consideration of US$8,200,000 in deferred payments payable in cash or common shares of Aurelius Minerals Inc. The mine has seen over $30mm invested in development by previous owners. The Aureus East mine is permitted with extensive modern infrastructure including a 300tpd [tonne per day] mill with on site assay laboratory. The property can be accessed via provincial Highways and is serviced by provincial grid power.

Which doesn’t exactly answer the question of what or where the mine is.

To find out more, I went searching in the company’s June 2020 (NI) 43-101 Technical Report for its Aureus East Gold Property, prepared according to the “Standards of Disclosure for Mineral Projects” of the Canadian Securities Administrators.

Turns out that the Aureus East Property is what is “previously known as the Dufferin Gold Project or East Dufferin gold mine.” It is “approximately 1,068 hectares in area” and “located in Halifax County, in north-eastern Nova Scotia [sic], approximately 140 kilometres by paved highway northeast of Halifax.” 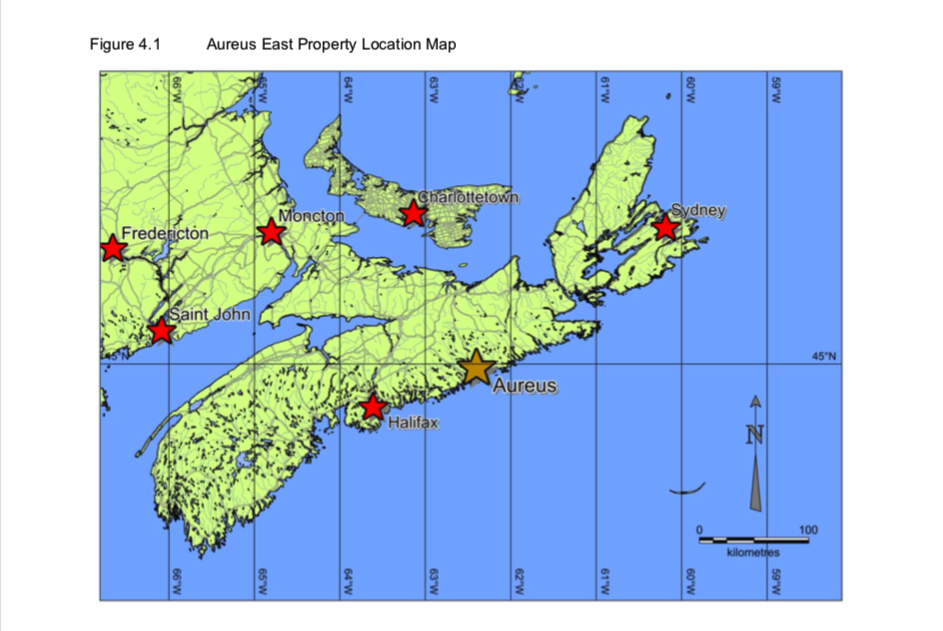 Aureus East, says the Technical Report, is “a property of merit.”

“The Property is 100% owned by Aureus Gold, a subsidiary of Aurelius Minerals Inc., through its recent acquisition of Aureus Gold Ontario from Sprott,” it states. The Technical Report also provides a table detailing the long and complicated history of the ownership of Port Dufferin property.

From 2016 until 2019, the Dufferin gold mine was owned by Resource Capital Gold Corp., which went bankrupt shortly after mining a bulk sample in 2018. Since then, the mine has been on “care and maintenance.”

But now, at least based on what Aurelius Minerals president and CEO Mark Ashcroft is telling Proactive Investors, the company seems to have big plans and hopes for the Aureus East / former Port Dufferin gold mine and its potential. And the company plugs it as if the mine were already “permitted,” ready to spring into action at a moment’s notice.

The company also holds an Environmental Approval, and Industrial Approval for the Property, both of which remain in place and valid.

Nor is there any record for the Port Dufferin gold mine on the Department’s list of environmental assessments of industrial projects in Nova Scotia since 2000.

Perplexed, I wrote to Nova Scotia Environment spokesperson Barbara MacLean to ask if Aurelius Minerals or Aureus Gold or any related companies did indeed hold valid environmental and industrial approvals for the Aureus East property.

MacLean replied that an Environmental Assessment was issued to Gerald McConnell, then president of Dufferin Resources Inc., on June 13, 1994 — nearly 27 years ago.

MacLean explained that the EA does not appear online because it predates Nova Scotia Environment’s electronic database, and went on to say:

In other words, Aurelius does not have an active and valid environmental approval for the mine, despite what it says about the mine being “permitted.”

The company does not have an active or valid Industrial Approval, it expired on September 13, 2017.  No mining activities can occur without an approved EA and IA. The department has clarified these requirements with the company.

That means that there is only one gold mine in Nova Scotia that does have valid permits, namely the Touquoy open pit mine in Moose River that belongs to Atlantic Gold / Atlantic Mining NS. That mine received its environmental approval from the province in 2008. The Touquoy mine was able to avoid a federal environmental assessment because it did not meet the production threshold that would have required such an assessment.

However, new federal regulations in 2012 meant that mines the size of the three new ones proposed by Atlantic Gold as part of its Moose River Consolidated Project in eastern Nova Scotia — at Beaver Dam, Fifteen-Mile Stream, and Cochrane Hill — all require joint provincial and federal impact assessments.

The assessment process for the proposed gold mine at Beaver Dam began back in 2017, and is still ongoing. The impact assessment for Fifteen-Mile Stream is into its third year, and the Cochrane Hill project was registered back in 2018.

So it’s difficult to imagine that an environmental assessment approved by Nova Scotia way back in 1994 for Port Dufferin is going to pass muster today.

Before the company [Aurelius Minerals] could proceed with any mining activities [at Aureus East / Port Dufferin], the department would ensure the company is held to current standards.