You are here: Home / Environment / “Pig in a poke”: die-hard proponents want to open Nova Scotia to fracking 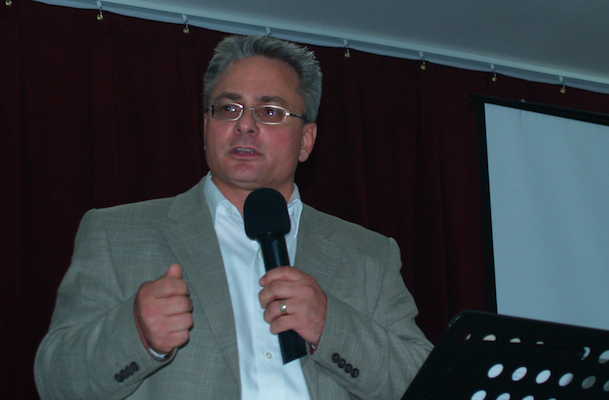 About 200 people gathered last evening in Pugwash, filling the Northumberland Community Curling Club for a debate framed around the resolution “fracking will be beneficial to Cumberland County.”

The audience was, not surprisingly, clearly divided between those in favour and those against. For many, including several members of the Nova Scotia Fracking Resource and Action Coalition (NOFRAC), it was like déjà vu, a return to the days in 2012 and 2013 when they were trying to convince the NDP government to ban on fracking.

Eventually the government of Darrel Dexter launched an independent review of the socio-economic impacts of the process under the leadership of then Cape Breton University president, David Wheeler.

It’s now four years since the report by a panel led by Wheeler recommended that a great deal more knowledge was needed about the many risks of hydraulic fracturing before the controversial practise be allowed in Nova Scotia, and it was just weeks later, the government of Stephen McNeil passed a bill to place a legal moratorium on fracking in the province.

But the matter has hardly been laid to rest, and certainly not by die-hard proponents of fracking, who have been popping up all over the province this year.

First came the Municipality of the District of Guysborough, which in January called for an end to the moratorium because of the economic benefits its warden claimed oil and gas development would bring to the community (although the Nova Scotia Onshore Petroleum Atlas that had just been released showed no potential for onshore gas development in Guysborough).

Then MLA for Kings North and PC leadership candidate John Lohr chimed in, saying it was time to “lift the ban on onshore natural gas and let communities make the choice that’s right for them.” While less strident in their support of fracking, fellow PC leadership candidates Tim Houston, Cecil Clarke, and Elizabeth Smith-McCrossin say it could go ahead under certain conditions.

The Conservative interest in fracking was certainly evident last evening in Pugwash.

As far as I could tell, there were no other political parties represented at the event, which was organized by a group calling itself “Friends of Cumberland County,” with support from the Six Rivers Chamber of Commerce, formerly the Pugwash and Area Chamber of Commerce.

Moderated by retired Justice of the Nova Scotia Court of Appeal, Elizabeth Roscoe, the debate featured Michael Bradfield, retired Dalhousie University economics professor and a member of Wheeler’s independent review, who argued against the resolution and against fracking. Fracking wells, he noted, leak methane, a potent greenhouse gas that contributes to climate change.

On the pro-fracking side was Gerard Lucyshyn, vice president of research at the Frontier Centre for Public Policy and economics lecturer at Mount Royal University in Calgary.

Although it wasn’t mentioned in his introduction, Lucyshyn was another at the event with strong conservative ties. In 2016 – 2017, he was president of the former Wildrose Party constituency association in Calgary-West, and in 2013 – 2017, a board member of the Conservative Party of Canada in the Bow River electoral district association.

As for the Frontier Centre for Public Policy that Lucyshyn represented, it is a free-market think tank in Manitoba, Saskatchewan, and Alberta, which produces dog-whistle commentaries harshly critical of Islam or stridently supportive of “settlers” who brought the “Enlightenment” to North America.

Lucyshyn, who hails from Alberta and a centre that seems to deny climate change, seems a curious choice for a debate on fracking in Cumberland County. At least he would be, had the event been organized by a disinterested party with no particular leaning one way or the other.

It wasn’t. The debate was spearheaded by Pugwash native Douglas Leahey, who worked for many years with the oil and gas industry in Calgary, and was president and director of the Canadian climate change sceptic organization “Friends of Science.”

Leahey took umbrage when I asked him about his former role with “Friends of Science, a climate-change denial group.” He told me they were not deniers, they were “realists.”

As for the overwhelming scientific consensus that we are experiencing anthropogenic climate change, Leahey informed me that the scientists have been “shown to be wrong.”

Leahey said he is in favour of fracking, which is why he wanted to organize the debate and have an exchange of ideas on what is a contentious issue.

He said he didn’t know if anyone had changed their minds after the debate, as no polling had been done.

It seems unlikely that anyone did.

Michael Bradfield’s exposé of the immense risks – economic and environmental – of fracking, garnered enthusiastic applause from many in the audience open to his evidence-based arguments. So did powerful statements and questions from members of the audience who took to the microphone to express their concerns about the risks that fracking posed to human health, water, and the climate.

Bradfield also said that with the level of regulatory capture in Nova Scotia (and indeed across Canada), the two-year royalty holiday the province would offer fracking companies, and the sorry experience that Nova Scotians had with Sable gas that was mostly exported to the US, the benefits would be few and the costs extremely high should the fracking ban be lifted.

“Where I come from,” he told the audience, “I’d say they are asking us to buy a pig in a poke.”

Gerard Lucyshyn’s arguments focused on the value of the natural gas “assets” “under our feet” in Cumberland County that could be had by fracking. He estimated the value at between $763 million and $4.7 billion, and seemed unbothered by the enormous spread that suggested an awful lot of unknowns, something Bradfield later pointed out.

Lucyshyn dwelled on what he called the “fear factor” and offered a slide to help the audience understand the “the amygdala and phobias” they might be experiencing to cause them to oppose fracking. He also held up a piece of paper on which he had drawn a few lines and also two circles. He explained that one of the circles was the size of a paint can and the other the size of a coffee cup, to show the audience the size of the perforating gun and drills that would be working 7,000 feet underground to release the gas. This seemed intended to assure the audience that fracking was really an innocuous process, and nothing to worry about.

To emphasize his point, he dwelled on “odds,” saying that the members of the audience had a much greater chance of having a motor vehicle accident, than there was a chance of an accident with a fracking well.

At times pedantic and very repetitive, Lucyshyn often sounded as if he were regurgitating and trying to hammer home talking points gleaned from industry PR. But his messages went over well with pro-fracking members of the audience, particularly those from industry, who took to the microphone to speak of their own experience with fracking chemicals and cement casings all over the planet, and to dismiss critics of the process as emotional and uninformed.

Despite the divide in the curling hall, the audience was well behaved and civil, and Bradfield told me he was “pleasantly surprised” by the large turnout.

He also said the Conservatives are making fracking a political issue.

That means last night’s fracking debate is probably just the first of many to come before Nova Scotia either buys — or rejects for good — the pig in a poke.