You are here: Home / Environment / Pieridae wants $925 million from the Canadian government to jumpstart the Goldboro LNG plant 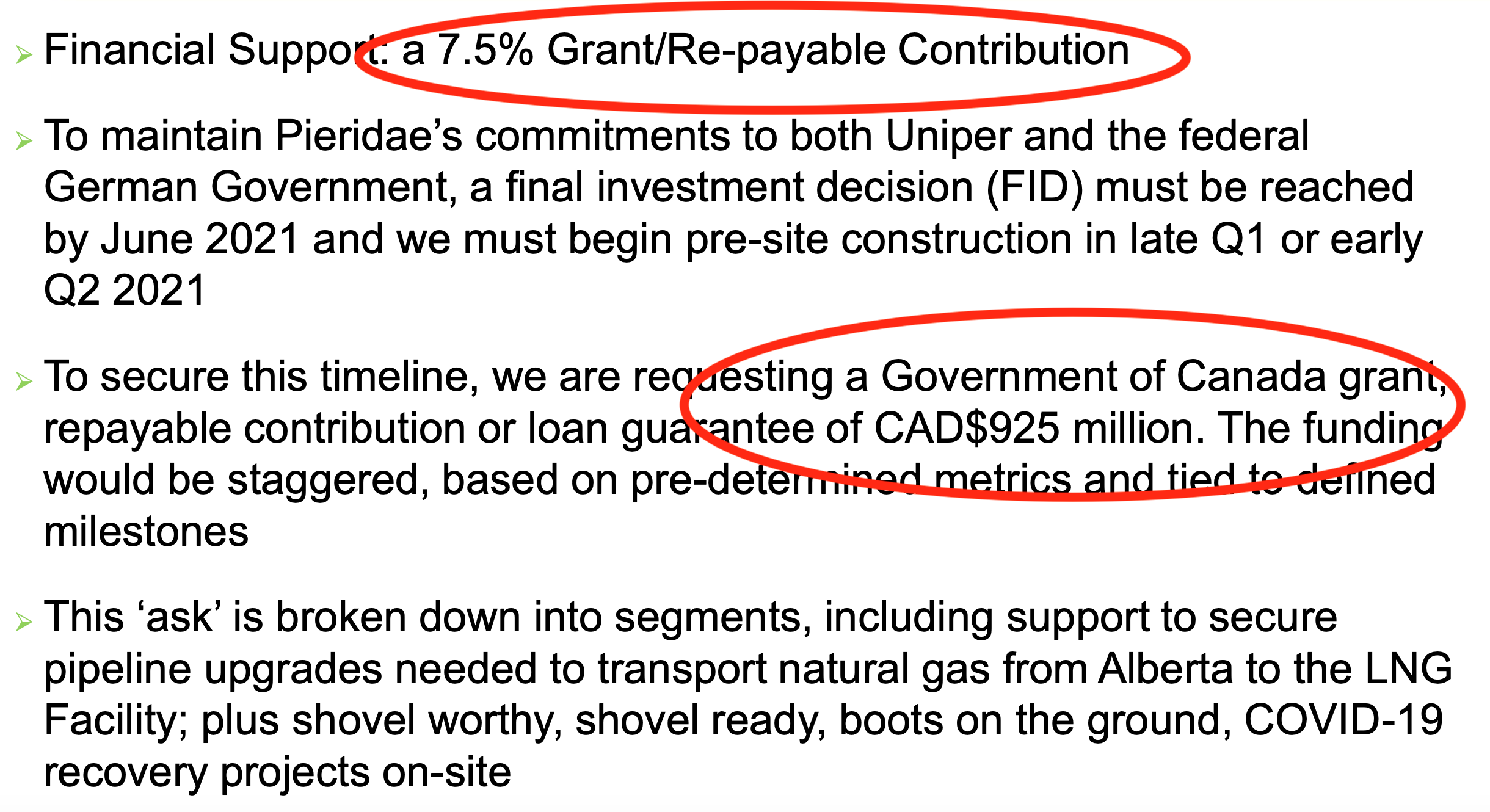 A slide from a PowerPoint presentation Pieridae made before federal officials in December.

Pieridae Energy, the company behind the proposed Liquified Natural Gas (LNG) plant to be located in Goldboro, Nova Scotia, has asked the Canadian federal government for $925 million in grants, loans, or loan guarantees to jumpstart the project.

The ask was made through a PowerPoint presentation last December, and was apparently part of a lobbying blitz Pieridae was undertaking on Parliament Hill. As the Halifax Examiner reported Friday, Pieridae hired Luka Stevanovic, a Senior Consultant at Maple Leaf Strategies, to lobby on its behalf.

On December 17, Stevanovic spoke with Mike Kelloway, the MP for Cape Breton–Canso, the riding in which the proposed LNG plant is located.

Before December, Stevanovic had repeatedly spoken with Sean Fraser, the MP for Central Nova. The Examiner understands that Fraser is spear-heading the Pieridae effort.

Neither Kelloway nor Fraser has responded to requests for comment. Likewise, Pieridae spokesperson James Millar has not responded to a request for comment. If any of them do respond, we will update this article.

The Pieridae proposal envisions natural gas sourced in Alberta being delivered via new and enlarged pipelines to Nova Scotia, where it will be liquified at the Goldboro plant. That LNG would then be pumped into giant LNG carriers that will carry the LNG across the Atlantic to a new terminal to be built by the energy company Uniper in Wilhelmshaven, Germany; there, the gas will be regasified and distributed to German homes and businesses.

The PowerPoint presentation says that Pieridae wants the Canadian federal government to provide a “grant/repayable contribution” of $925 million — which is 7.5% of the entire project cost of $12.25 billion. The financing is needed, says the PowerPoint presentation, because “to maintain Pieridae’s commitments to both Uniper and the federal German Government, a final investment decision (FID) must be reached by June 2021 and we must begin pre-site construction in late Q1 or early Q2 2021.”

As Joan Baxter reported in October:

In 2013, Pieridae’s Goldboro LNG Limited signed a 20-year agreement with Germany’s Uniper Global Commodities that would purchase five million tonnes a year of LNG from the Goldboro plant (In 2020, a Finnish state utility company bought Uniper).

Since Pieridae signed the agreement with Uniper, it has been amended five times because it could not meet the agreed delivery date for LNG. The most recent amendment, in April 2020, puts the first delivery date at between August 31, 2025 and February 28, 2026.

In addition to the repeated delays in the Pieridae project, citing poor market conditions, Uniper has put its Wilhelmshaven regasification project on hold.

Pieridae also says it has secured $4.5 billion in German government financing for the project, but when Baxter contacted the German Ministry for Economic Affairs and Energy to ask about the loan, she was told that:

We can hereby confirm that we do know the respective Goldboro LNG project in Nova Scotia and that a Letter of Interest (LOI) has been issued by the German Government. This LOI is legally not binding and shall only express that the project can be considered as eligible under the assumption that certain criteria are met. An LOI can be issued to support a German offtaker [buyer of the LNG] in the bidding process.

Kindly note that a final and binding decision on whether an UFK can eventually be granted or not requires the prior assessment of the economic, technical and legal aspects in detail and the compliance with internationally accepted environmental, social and human rights standards. This assessment will be performed as part of the regular application procedure once a formal application has been filed.

We have asked Pieridae Energy to avoid ambiguous wordings in this context. [emphasis added]

So it appears that both the Uniper and German government financing legs for the Pieridae project are on shaky ground, and that Pieridae wants to firm up that ground with financing from the Canadian government.

In the PowerPoint presentation, Pieridae says it will “raise the bulk of the financing for the Project — ~$12.25 billion — through private sector financing.” But private financing is only just barely “the bulk” of the financing, as between them, the German and Canadian governments will be financing over 44% of project costs.

Also included in the PowerPoint presentation is a claim that the Goldboro plant “can comply with a net zero emission future.”

How does mining and burning fossil fuels for 20 years not increase greenhouse gas emissions?

2)  Reduce emissions at the LNG terminal

All three claims are suspect.

“Natural gas extraction releases fugitive or run-away methane emissions, apart from releasing carbon emissions during combustion,” Gurprasad Gurumurthy, the Ecology Action Centre’s Energy Coordinator tells the Examiner. “Carbon Capture and storage technologies do not function with 100% efficiency, and only have maximum effectiveness of 70-80% in large point sources such as thermal plants. Besides, there are other emissions from project operations that need to be factored in. We want to move away from building such infrastructure that perpetuates fossil fuel use in the long run. Overall, fossil fuel-based projects such as the Pieridae project are incoherent with a net zero future”