You are here: Home / Environment / Nova Scotia Power delays by one year the start of its proposed charge on ratepayers with solar panels 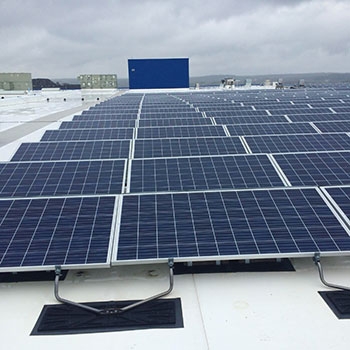 The solar panels on the Ikea store in Dartmouth. Photo: NSCC

Nova Scotia Power is delaying by a year the start of its proposed “system access charge” on ratepayers who install solar panels on their houses or buildings. The charge would have come into place for all solar systems installed after today (February 1, 2022); but the power company now says it is moving the start date back a year, to February 1, 2023

As proposed in a filing with the Utility and Review Board on Thursday, the charge would entail a fee of $8 a month on every kilowatt of installed capacity, or $960/year for a homeowner with a 10kw system.

Nova Scotia Power CEO Peter Gregg justified the proposed fee by saying that the net-metering in place for people with solar panels, which allows them to sell electricity into the grid when their systems exceed their buildings’ demands and buy power back from the grid when the solar panels aren’t generating power, is unfair to ratepayers without solar panels.

“There is still a cost to serve those (net-metered) customers because they continue to be connected to the grid,” Gregg told the Examiner Thursday. “Their costs have gone down and we still have cost in the system to provide reliable power and so as they are paying less, it just naturally happens that the rest of the customers’ costs go up.”

Nova Scotia Power is a subsidiary of Emera. A very similar argument is being made by another Emera subsidiary, Tampa Electric Company, which has convinced Florida state Republican Senator Jennifer Bradley to introduce Bill SB 1024, which would impose a net metering charge on customers with solar panels. “When you overpay for the excess energy produced by rooftop solar customers, you force the remaining rate payers to share the infrastructure costs. This cost shift to non-solar customers is substantial, and will shortly approach a billion dollars,” Bradley said earlier this month.

On Friday, the day after Nova Scotia Power submitted its rate application to the UARB, the province’s nascent solar industry erupted in fury to condemn the proposed fee. Many companies have made large capital investments in equipment in anticipation of the continued net metering system as is.

The proposed fee would undermine the entire industry, just when more renewable power is needed, say both industry representatives and environmental activists.

Also on Friday, Tory Rushton, the minister of Natural Resources and Renewables, issued a statement condemning the proposal, writing in part:

We’re disappointed at this proposal by Nova Scotia Power and, like I have said, we want to protect ratepayers. We’ve heard what Nova Scotians and the solar industry have said about the immediate and serious impacts this net-metering charge will have.

Nova Scotia has set one of the most ambitious targets for reducing greenhouse gas emissions and to get there we will need a range of solutions to expand access to renewable energy, including solar. We’re frustrated that NS Power has made a proposal that can hinder the progress we’ve been making to advance our climate change goals.

As a government, we want Nova Scotians to continue to adopt solar. That is why we have continued to invest in programs that encourage Nova Scotians to do that. It has led to jobs and economic benefits for Nova Scotians and their communities. We believe Nova Scotia Power’s proposal related to a system access charge for net-metering customers who convert to solar energy is not in line with that goal.

Recently, Nova Scotia Power submitted a general rate application to the Nova Scotia Utility and Review Board which will now undergo a rigorous review process seeking public input over the coming months.

We understand that the proposed changes to the province’s net metering program have caused a lot of discussion and concern for the solar industry.

Over the past number of days, we’ve heard from our customers and yesterday we talked to Solar Nova Scotia to hear the concerns of the solar industry first-hand.

Collaboration and consultation are important to me and my team and when we don’t get it right, we are committed to fixing it.

We regret that there weren’t more conversations with the solar industry ahead of the filing and that they were caught off guard by the proposed changes and, specifically, the effective date these changes would apply.

In the interest of ensuring that the right conversations can take place, we have made the decision to change the date in our filing from February 1, 2022 to February 1, 2023 and we will amend our General Rate Application to make this change.

The reality is that the provincial Net Metering Program as it is set up now isn’t working for all Nova Scotians.  It needs to be addressed. We hope extending the deadline by one year provides all stakeholders with the necessary time to create solutions that support the continued growth of the solar and renewable industries in Nova Scotia.

We recognize that customers who choose solar do invest a significant amount and do pay for the electricity they use. What they do not pay for are all of the costs associated with them having access to the NS Power grid when they need energy from the grid, like the cold winter evenings when the sun is not shining.

Under the current structure, customers who may not choose solar are paying for net metering users to be able to rely on and have access to the grid when they need it.

Net Metering is a challenge for many jurisdictions going through a similar energy transition, including NS. And we know that we need to work together to address it because at the heart of it, we all want the same thing.

Our team is committed to a consultation process and work is already underway. We want to use this time to get the solution to this problem right and to also make sure that what we build together is sustainable for generations to come.

We are committed to achieving our shared goal of getting off coal-fired generation by 2030, and renewable power generation is a cornerstone of this.”