You are here: Home / Environment / Northern Pulp is “insolvent,” but the company that owns it, Paper Excellence, is on a $3 billion buying spree 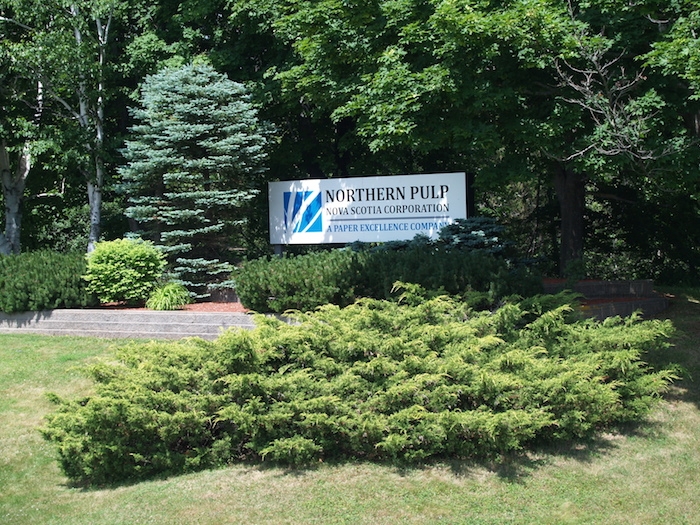 Yesterday, Paper Excellence of British Columbia announced that it was purchasing the US-headquartered pulp and paper giant, Domtar.

Domtar, with corporate offices in Montreal and in South Carolina in the US, says it is “one of the largest manufacturers of pulp in the world.” It has 13 pulp and paper mills in North America and 10 “manufacturing and converting facilities” in 15 US states. Domtar also has four pulp mills in Canada — three in Ontario (Dryden and Espanola), one in Québec (Windsor), and one in British Columbia (Kamloops).

This deal with Domtar gives Paper Excellence entry into the US market, and increases its already considerable control over the pulp industry in Canada, where it owns eight mills, including the Northern Pulp mill in Nova Scotia.

In yesterday’s press release, Paper Excellence said the purchase of all of the issued and outstanding shares of Domtar was an “all-cash transaction” with a value of “approximately $3.0 billion.”

Interesting, indeed, that Paper Excellence has $3 billion to spare.

Northern Pulp Nova Scotia Corporation — a “Paper Excellence company”— and seven related companies in Nova Scotia are all said to be “insolvent.” They are under creditor protection in the British Columbia Supreme Court, and have been since they began petitioning in June 2020 for relief from the “financial difficulty” they found themselves in — namely about $311 million owed to creditors, as the Examiner reported here.

More than $85 million of that debt is owed to the people of Nova Scotia, thanks to the largesse of previous Progressive Conservative and NDP provincial governments that lavished loans and grants on the company. That includes a 30-year loan for $75 million that NDP Premier Darrell Dexter’s government gave the Northern Pulp affiliate, Northern Timber, in 2010 to purchase 475,000 acres of Nova Scotia woodland, with a hidden gift of $7 million when the province immediately repurchased 55,000 acres of that land at 1.7 times the price per acre that Northern Pulp had paid for it.

After Northern Pulp sought debt relief in the BC court, it asked the province of Nova Scotia for $50 million more in new financing, over and above what it still owes the province.

That request was declined, but the government under then-Premier Stephen McNeil did agree to freeze payments on the outstanding loan of over $85 million, as the Examiner reported here.

But most of the original debt of $213.3 million that Northern Pulp and its affiliates are seeking protection from in British Columbia is to Paper Excellence Canada Holdings Corporation.

Last July, I wrote at great length about the corporate labyrinth of parent companies in which Northern Pulp Nova Scotia Corporation and its affiliates are nested.

That labyrinth is a corporate casse-tête of numbered companies, holding companies, and investment companies scattered around the globe. A good number are registered in the Netherlands, Singapore, Malaysia, and the British Virgin Islands, countries that the Tax Justice Network ranks among the top “world’s most important tax havens for multinational corporations” because “they are most complicit in helping multinational corporations pay less tax than they are expected to.” 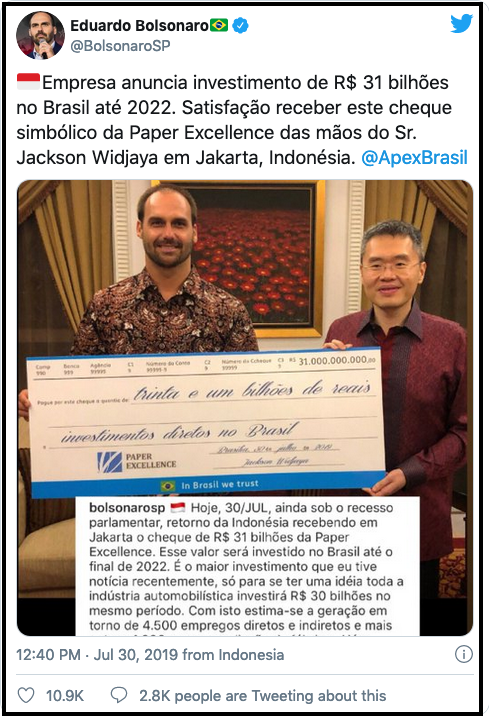 Tweet from Eduardo Bolsonaro (left), son of Brazil’s far-right president, showing him receiving a symbolic cheque for US $3.5 billion from Jackson Widjaja (right), for a pulp mill in Brazil

Paper Excellence Canada would like to have Canadians believe that because it is headquartered in Richmond, BC, it is a Canadian company owned “100% by Jackson Widjaja,” according to its then deputy CEO Pedro Chang. Although Widjaja is part of the billionaire Widjaja family of Indonesia, owners of the corporate empire that includes the Sinar Mas Group and Asia Pulp & Paper, Chang denied that Paper Excellence was a subsidiary of either of those.

Technically, that may be so, just because of the sheer number of layers in between. But a deep dive into the corporate structure of Paper Excellence, and a trip through the long and tortuous tunnel of corporate contortions and tax havens where they are located, does eventually and inextricably lead right to the door of the Sinar Mas Group.

From last July’s “Corporate Shell Game” article in the Examiner:

A useful tool for navigating corporate labyrinths is Statistics Canada’s Inter-corporate Ownership (IOC), which calls itself “a reliable index of who owns and/or controls whom in Canada,” and “the most authoritative and comprehensive source of information available on corporate ownership; a unique directory of ‘who owns what’ in Canada.”

The 2019 Inter-corporate Ownership index for the Sinar Mas Group shows that it contains 47 corporations in Canada, in a complex pyramid of subsidiaries and affiliates nested inside each other, some nine levels deep. It resides in and is controlled from Indonesia.

The Sinar Mas Group is a corporate behemoth, with hundreds of affiliates and subsidiaries around the world in everything from pulp and paper to mining, communications, healthcare, agribusiness, financial services, and energy. It is still largely controlled and run by members of the Widjaja family, whose net worth, according to Forbes, is US$ 9.6 billion (about $13 billion Canadian). In 2018, total annual revenues from the Sinar Mas conglomerate were estimated to be about US$30 billion.

And that means, if you’re still with me after that painful exercise , that Northern Pulp’s largest creditor, and by far, is none other than one of its owners — Paper Excellence Canada Holdings. (How Paper Excellence shifted all that debt to Northern Pulp from its assets in British Columbia is another story that you can also read about, if you have the stomach to do so, in Corporate Shell Game Part 2.)

So there it is. Here are a few things that Paper Excellence Canada Holdings seems unable or unwilling to do:

1. come up with just over $213 million to bail out its Northern Pulp family of companies in Nova Scotia;
2. make payments on the debt of more than $85 million that its Nova Scotian family of companies owes to the people of Nova Scotia;
3. submit a satisfactory plan for decommissioning for Boat Harbour that it was supposed to provide to the province, despite being given a six-month extension on the deadline, or come up with the $19 million required to remove the sludge, thus leaving that to the citizens of Nova Scotia to pay.

And yet here is something Paper Excellence Canada Holdings seems to have had no problem doing: finding $3 billion to buy Domtar.