You are here: Home / Environment / Environment Minister Keith Irving approves re-routing of Highway 316 to make way for the Goldboro LNG plant, but no one is addressing the gigantic increase in greenhouse gas emissions the plant will produce 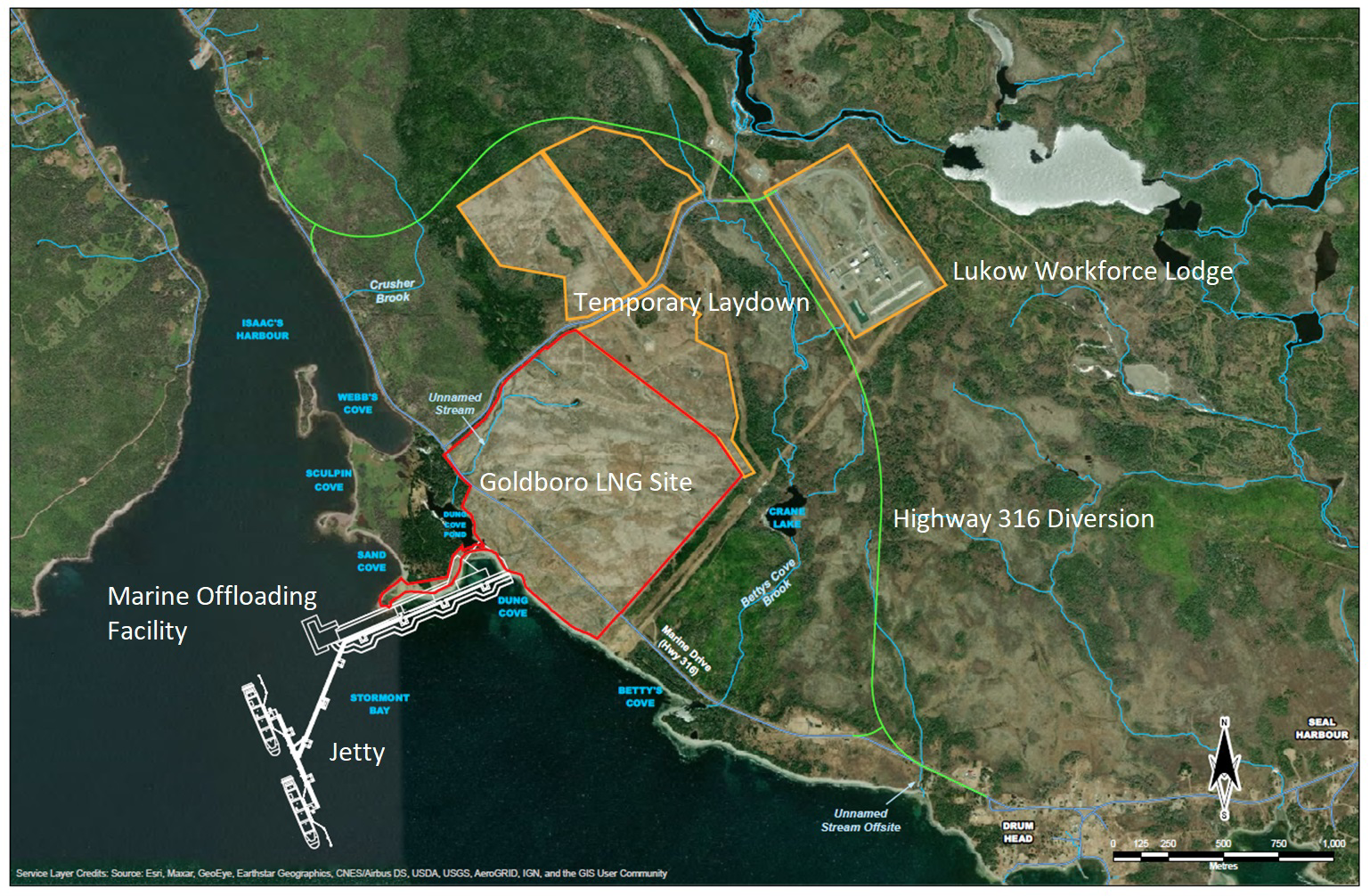 Nova Scotia Environment Minister Keith Irving has issued an approval with conditions to Pieridae Energy that will permit the company to re-route a road as part of a proposed $13-billion Liquefied Natural Gas (LNG) facility.

Pieridae has been working for years on a proposal to pipe natural gas from Alberta to Goldboro, where it would be processed and shipped to a potential customer in Germany. Joan Baxter has reported extensively for the Halifax Examiner on some of the questions associated with the megaproject — including its impact on climate change.

Here’s how the roadway project was described in Pieridae’s Environmental Assessment application:

The purpose of the proposed undertaking is to permanently realign approximately 3.5 km of the existing Marine Drive (Highway 316) around the proposed Goldboro LNG Project site, located in the Goldboro Industrial Park, in Guysborough County. The realigned new Marine Drive will be a 6 km, two-lane public road. The realignment is proposed to increase public safety and provide Pieridae with unobstructed access to planned marine infrastructure.

Following a review of the information provided by Pieridae Energy (Canada) Ltd., and the information provided during the government and public consultation of the environmental assessment, I am satisfied that any adverse effects or significant environmental effects of the undertaking can be adequately mitigated through compliance with the attached terms and conditions.

There are indeed lots of conditions — more than 40 by my count —  aimed at addressing concerns expressed to the minister by various provincial and federal government departments, as well as by citizens and environmental groups.

You can find those comments here.

Although the proposal to re-align the highway is not expected to significantly change the greenhouse gas emissions associated with the Goldboro LNG megaproject, Irving received this stark reminder from the Climate Change unit within his own department:

The proposed LNG facility is expected to be a major source of greenhouse gas emissions in Nova Scotia. Part of the original Environmental Assessment approval of the Goldboro LNG facility included the condition to prepare and receive approval for a Greenhouse Gas Management Plan. That plan is still outstanding.

In other words, the company has yet to put in writing how it plans to deal with its plant alone increasing total  provincial greenhouse gas emissions by 18% at a time when the province is trying to reduce emissions to slow the pace of climate change. Irving also received letters from citizens objecting to the entire Goldboro LNG project, including the road.

The Lands & Forestry Department filed a brief which stated the preferred realignment option outlined for Highway 316 will result in a high net loss of wetlands area. “Alternative routes would result in considerably less wetland alteration and as a result would have less of an impact on the species-at-risk (SAR) and Species of Conservation Concern (SOCC) birds in the area, many of which rely on wetlands and wetland fringe area for nesting.”

In response, Irving has forbidden Pieridae from conducting “any activity within 30 metres” of eight watercourses and wetlands areas unless it obtains written authorization from the Environment Department.

Other conditions to mitigate the impact of road construction include developing and submitting a wetlands management plan and a wildlife management plan for approval before the project can begin.

Blasting activity should be scheduled outside the migratory bird season.

The submission from Lands & Forestry notes the re-routing of Highway 316 will involve the transfer of some Crown land to Pieridae but it does not say how much Crown land would be involved.

“The development of the proposed road will impact local drainage patterns, but the impact of this impact is not addressed in the description of Surface Water Quality VEC entry,” commented a specialist with the Water Resources Management unit, a division of the NS Environment Department. “These drainage areas were neither delineated, characterized, or further assessed within the submission.”

Irving has responded with the following conditions:

• Pieridae must conduct a baseline survey of residents’ wells in the area and monitor groundwater for five years following the road re-alignment. (It’s unclear if the company would have to replace homeowners’ wells, if there was a change.)

• Identify acid rock drainage concerns and provide a plan to manage them.

• Submit to the Environment Department an erosion and sedimentation control plan for all phases of the project (clearing, grubbing, construction, operation).

Irving’s green light gives the company a two-year deadline by which it must begin road construction. Meanwhile, Pieridae has been ordered to establish a complaints process as well as a community liaison committee to talk with local residents and other groups. Dust and noise are likely to be addressed.

A separate communications plan must be developed to keep the Mi’kmaq informed about the project and seek input from the First Nation with respect to protecting heritage and any archaeological finds.

Communication does not appear to be the company’s strong suit when it comes to answering questions. Yesterday the Examiner left voicemail messages at the company’s Halifax and Calgary offices, as well as on the cellphone of James Millar, the communications officer for Pieridae. An email to the company received a one-size-fits-all generic response but did not address our questions.

The Examiner wants to know if the company can live with the terms and conditions of the approval and if it plans to go ahead with re-aligning the highway.

On a broader level involving the entire project, the Examiner would like to know the status of Pieridae’s December 2020 request to the federal government for approximately $1 billion in the form of a grant, loan, or loan guarantee so the LNG development can get off the drawing board. So far, neither of these questions has met with a response from Pieridae.

The roadway widening project received letters of support from the Maritimes Energy Association, as well from about a dozen local residents eager to welcome the 5,000 construction jobs Pieridae says would be involved in building the facility.

“Having lived in the Goldboro area for a goodly portion of my life,” said one. “I know the area well and I do not see any problem in moving the Highway 316 so it goes around the LNG site. Please do not let this project die. Nova Scotia needs good paying jobs. Enough people have departed NS.”

Marine Drive is the major tourism travel route along the Eastern Shore. Visitors to our Shore enjoy its quiet natural beauty and ocean vistas. In order to minimize the potential damage to our reputation and consequential loss of travellers, we would recommend that the following actions be incorporated into the realignment project.

The rerouting must ensure that the view plane from the road does not show a massive industrial site. One potential solution is the creation of a tree buffer zone to obstruct the View of the site that is sufficiently wide to allow blowdowns. We would recommend consideration of at least a 300m wide tree zone between the road and the LNG facility.

The road to Goldboro may be paved with good intentions. Whether the LNG Project succeeds in getting financing within the next two years will determine whether Pieridae moves ahead with its plan, now approved by the province, to re-route Highway 316.