In a recent hearing before the Aquaculture Review Board, Kelly Cove Salmon Ltd. (a division of Cooke Aquaculture) acknowledged it’s been dealing with elevated levels of sea lice in two of its fish farm sites: Rattling Beach and Victoria Beach.

“It’s potentially Nova Scotia’s first sea lice outbreak after a long, long time, where the company and the government [have] been telling us that it’s just not an issue here,” Simon Ryder-Burbidge, marine campaign coordinator with the Ecology Action Centre, told the Examiner in an interview.

“Then they acknowledged that they were actually dealing with two concurrent sea lice outbreaks right now at both sites.”

At the time of the acknowledgement, Kelly Cove Salmon (KCS) was appearing before the Aquaculture Review Board, which will decide whether to approve the company’s application to expand the boundaries of its fish farm at Rattling Beach. That hearing wrapped on November 18. Should the Board approve the application, the Rattling Beach operation won’t actually expand; it’s been operating beyond its approved borders since at least 2015.

On November 15, the first day of the hearing, Cooke Aquaculture manager Jeff Nickerson told the board that KCS had been treating salmon for sea lice using medicated food for three weeks at their Victoria Beach site. That method had proved unsuccessful, so that day, he said, they were beginning mechanical treatments to remove the parasite. That treatment uses a converted supply ship to remove salmon from the pen and wash the sea lice off them with warm water. The ship used for this treatment was still docked in the area as of November 30.

Regarding the Rattling Beach site — where the company is applying for its boundary expansion — Nickerson said KCS is continuing to monitor sea lice levels to determine whether a treatment is necessary.

Nickerson also told the Board that the company had had to treat for sea lice at its Victoria Beach site in 2014.

Both sites are located near the Digby Gut, the narrow channel that connects the Annapolis Basin to the Bay of Fundy. 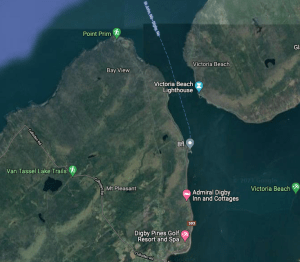 The Digby Gut connecting the Bay of Fundy to the Annapolis Basin. Victoria Beach sits on the east side, Rattling Beach on the west. Photo: Google Maps

“So any wild salmon that might be left in that area,” said Ryder-Burbidge, “is going to have to swim right between these two sites to get to their home rivers in the Annapolis watershed or in the Bear River watershed.”

There are two groups of wild Atlantic salmon in the area. The Inner Bay of Fundy salmon were deemed endangered under the federal Species at Risk Act in 2003. The Southern Upland salmon have been deemed endangered by a different body, the Committee on the Status of Endangered Wildlife in Canada.

Sea lice are parasites that live on the outside of fish and feed on their surface tissue and mucous layers. Though they pose no threat to consumers, sea lice have a number of effects on the fish they attach to: they can negatively impact their immune systems, growth, and even some of their behaviours, such as their willingness to take risks. Predators are also more likely to eat fish that have sea lice on them. 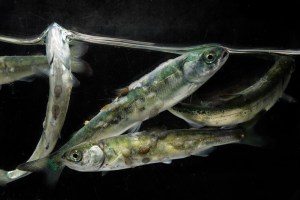 Sea lice are native to Canada’s Atlantic coast, meaning they have always been in the region. But Sean Godwin, a BC-based post-doctoral fellow at Dalhousie University, said open-net pen farms create an environment in which sea lice can thrive.

“It’s like any form of agriculture, really,” Godwin said in an interview. “You have a million organisms in a small space, kind of the perfect conditions for disease and parasites to proliferate. It’d be like COVID in a nightclub.”

Other factors also contribute to the proliferation of sea lice. As the Examiner reported in May, warming waters could make sea lice more prevalent year-round.

Godwin said farmed salmon are less vulnerable to the effects of sea lice than wild salmon. That’s because they don’t experience the same natural threats (predators and food scarcity) as wild salmon. But because sea lice can move freely through open-net pens, elevated levels of sea lice in fish farms can have significant effects on neighbouring wild salmon populations. Fish carrying the parasite can also escape from these pens and mix with wild salmon, causing further spread.

What’s worrisome for ecologists is when the sea lice population grows too large. This can have a detrimental effect on salmon populations. The point at which sea lice become a significant problem is measured by the ratio of sea lice to salmon in the water. Sea lice outbreaks are declared when that ratio reaches a certain level.

No uniform definition of “outbreak”

It’s difficult to determine what constitutes an outbreak, though, because definitions vary across regions. It’s up to provincial and federal legislation to decide when sea lice levels can be deemed an outbreak.

In British Columbia, Godwin said a ratio of three motile (capable of movement) sea lice to one salmon is defined as an outbreak, and would automatically necessitate the treatment of fish for the parasite.

Nova Scotia has no such threshold.

Cooke Aquaculture declined an interview, but in an email to the Examiner, spokesperson Joel Richardson said KCS monitors sea lice levels regularly at its sites. When sea lice counts rise, KCS — with approval from the Department of Fisheries and Aquaculture’s provincial veterinarian — may begin treating the fish for the parasite.

In the same email, Richardson wrote:

Sealice [sic] populations in the waters around Nova Scotia are some of the lowest in Atlantic Canada. Kelly Cove Salmon Ltd. has only had to treat a small portion of its farmed salmon for the pests on three occasions since the company began operating Atlantic salmon farms in the province over twenty-three years ago.

Richardson further said using the term “outbreak” to describe sea lice levels is “factually/scientifically incorrect” as they are not a virus or disease. Many scientific publications use the term. As does a 2014 independent review of aquaculture regulation in Nova Scotia.

Cooke declined to comment on the expansion application at Rattling Beach, as the Aquaculture Review Board has yet to make a decision. Beyond the most recent hearing, Cooke, through KCS, is looking to expand its salmon farming operations further in Nova Scotia. They’ve applied for two new sea sites and the expansion of an existing site in Liverpool Bay, as well as boundary amendments at three of its other salmon farming sites in Nova Scotia. 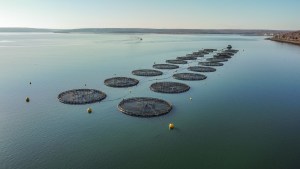 A big problem with the treatment of sea lice in Nova Scotia, Godwin said, is that the province is behind on public reporting and data availability.

“In places like British Columbia, where there’s a lot of wild salmon, and there’s a lot of spotlight on the issue, there’s a lot of public uproar about it. [Industry and government] are kind of obligated to be more careful, especially in light of a lot of the research that’s been done,” he said.

As well, Godwin said, the salmon farming industry in British Columbia is required to publicly report their sea lice counts. That’s not the case in Nova Scotia.

“There’s so many question marks about it because there’s no data transparency from industry or government,” Godwin said.

Although data on sea lice counts in Nova Scotia is spotty, the industry-funded Atlantic Fish Farmers Association puts out a report on New Brunswick’s numbers each year. The 2020 report found that, in certain regions of the province, upwards of 40 lice per fish were counted on two occasions between January and April. That report only counts adult female lice. Three other types of sea lice (pre-adult female, pre-adult male, adult male) are also capable of moving and spreading. These types of sea lice are included in West Coast counts.

In British Columbia, concerns over the impact of open-net fish pens on wild salmon led to the Department of Fisheries and Oceans announcing they would be transitioning away from the practice, completely banning such farms by 2025. No such announcement has come for any Atlantic province.

In an email to the Examiner, a spokesperson for the Department of Fisheries and Aquaculture said salmon farmers in Nova Scotia are required to follow farm management plans that are approved by the provincial government (farm management plans must include a strategy for dealing with sea lice outbreaks). The email reads:

The level of sea lice is tracked on a weekly basis (April to January) and the department is aware of the levels at each of the salmon facilities. The department routinely monitors levels at farm sites and, if elevated levels are found, the farmer is required to outline mitigation strategies to manage the issue. This may include such things as increased monitoring, harvesting, or treatment of the fish.

The tracking of sea lice numbers is not made public in Nova Scotia. And these “mitigation strategies” are not uniform across the province.

When asked if federal regulation could help standardize how sea lice outbreaks are measured in Canada, Godwin said anything that would bring Atlantic Canada up to speed with the rest of the country and the world in terms of data transparency would be a “good thing.”