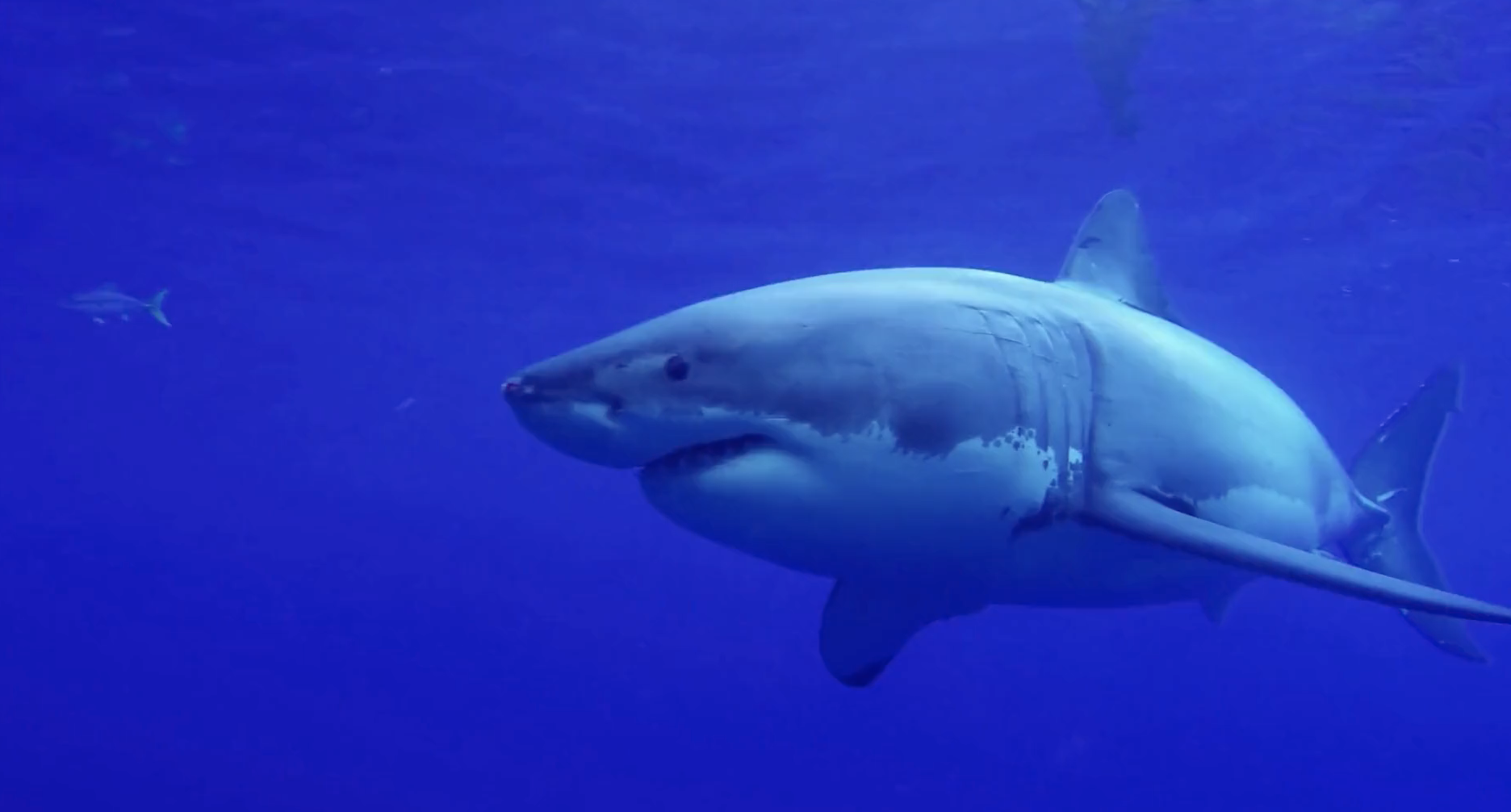 Great white sharks are headed north to spend the months of July to November cruising through Atlantic Canadian waters feasting on the abundance of seals that make their favourite meals.

With that in mind, a Dalhousie University marine biology student with a passion for the world’s largest predatory fish recently created a five-minute video and infographic to share shark-smart tips with Atlantic Canadians who enjoy the ocean.

Vanessa Schiliro wants people to know how best to avoid encounters and what to do (and how to behave) if they do encounter a great white shark while enjoying ocean activities like swimming, surfing, or diving.

“I moved to Halifax about a year and a half ago and I started seeing a lot of media headlines about the fact that there have been increased shark sightings, that they’ve been tracking more sharks in the area, but I was seeing a potential gap in terms of what do you do if you encounter or see a great white shark,” Schiliro said in an interview Monday.

“I realized that all of this news could be intimidating for some people, because they are big fish and they do tend to have a bit of a bad rap given their portrayal in movies like Jaws or how some media headlines tend to overemphasize the way shark encounters go down.” 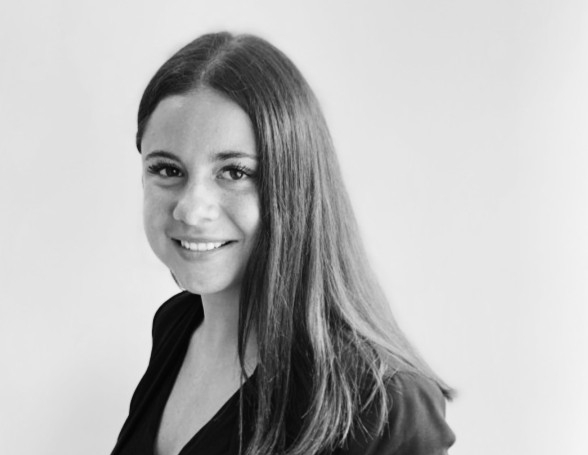 As noted in her information video, there are only two documented shark attacks in Nova Scotia. One was a fatal attack in 1891, and the second was a non-fatal attack that happened in 2021.

“It’s like bears, right? A lot of us go hiking, camping, many times over the summer and we know that there could be bears, we assume that risk. It’s very rare that that encounter will happen, but most of us know that we should stay calm and not do things to stimulate the bear in the case that we do see one,” Schiliro said.

“I want people to start thinking about it in that way and to just realize that humans and sharks have really coexisted for thousands and thousands of years and very few bad encounters have happened.” 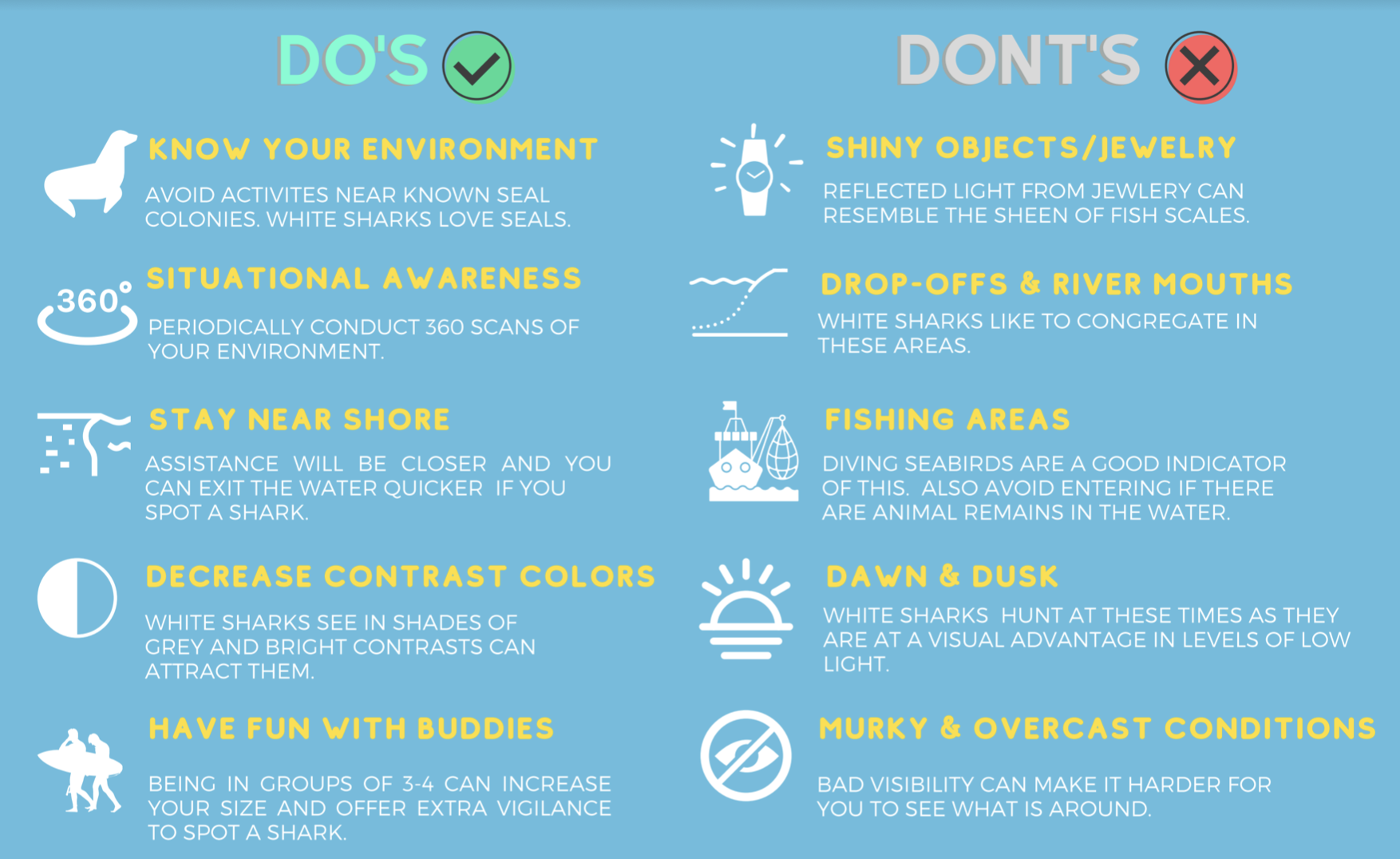 The do’s and dont’s-shark-smart tips and advice for swimmers, divers, and surfers in Nova Scotia from Schiliro’s infographic.

Schiliro said similar information is readily available in other regions frequented by great white sharks, including Hawaii, California, and Florida. Her goal is to help further decrease the odds of an encounter, and to increase the odds of it being safe if it does occur.

“It’s really about adjusting your own behaviour and increasing your awareness. Many people don’t even know that we have great white sharks here or that we have as many as we do,” Schiliro said.

“I think that’s just a step one in awareness that when you get in the water, that that’s what could be there.”

Schiliro said her fascination with the giant predators includes a passion for what she calls a “rebranding” of the great white shark. She believes it’s important to raise awareness of the important role they play in keeping oceans balanced and healthy. 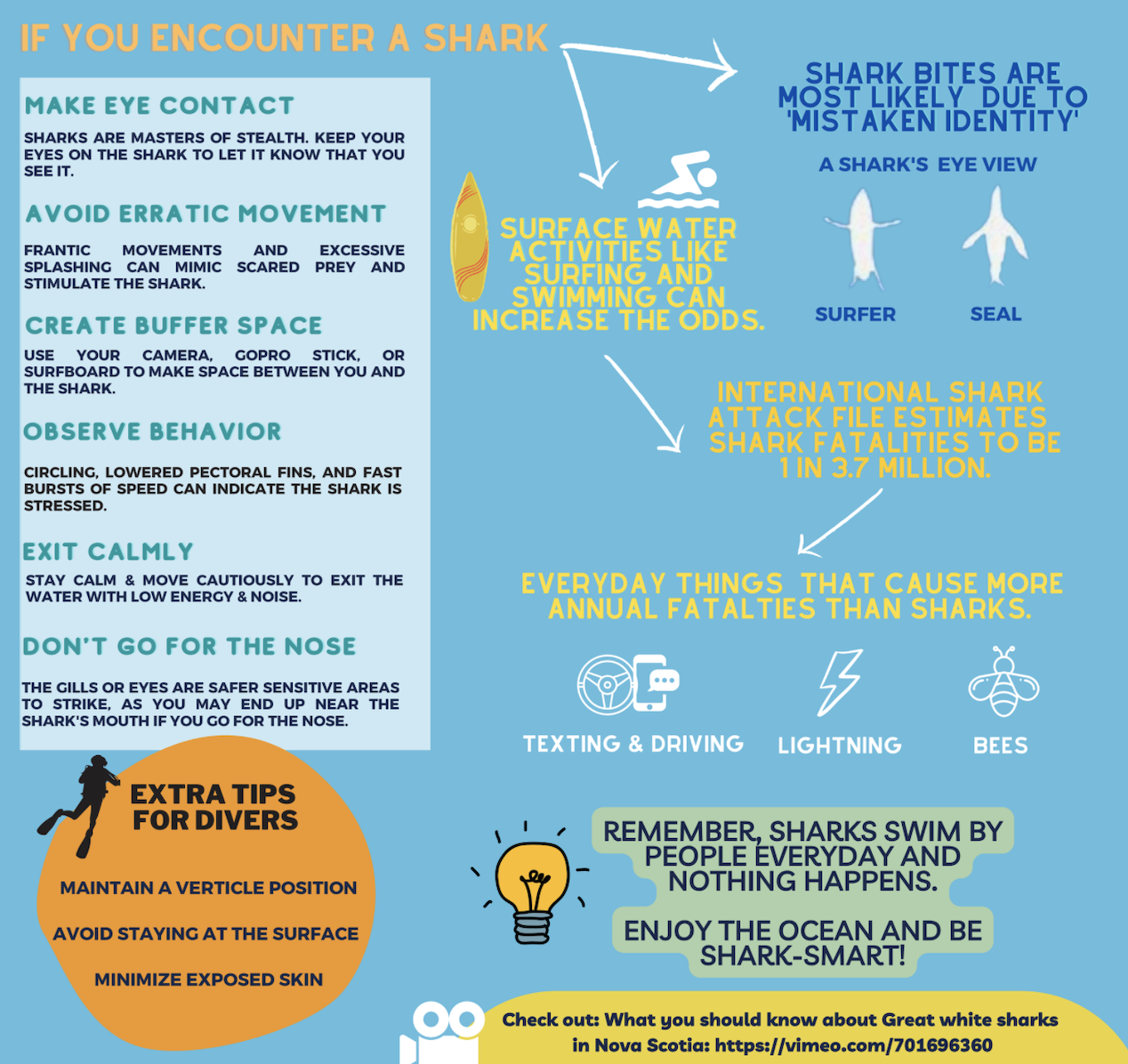 What to do if you encounter a shark, as taken from Schiliro’s infographic.

While there’s still a long way to go, Schiliro is grateful for a recent positive public shift that has many people trading their fear of great white sharks for curiosity, recognizing their fears are often driven by inaccurate movie and TV portrayals.

“In movies like Jaws, that’s just not the way white sharks behave. Ultimately, it is a wild animal, and like any wild animal we have to be mindful of the fact that we’re always entering their environment,” she said.

“The ocean is their environment, and so it’s up to us as well to increase our awareness and be aware of our behaviour when we’re sharing the ocean with such an incredible species.”

Schiliro said sharks swim by humans every day and nothing happens. According to her infographic, texting and driving, lightning, and bees all cause more annual fatalities than sharks.

“Seeing a shark in the ocean, especially with all the threats that they’re facing today, is a really positive indicator for the health of our waters,” she said.

“We should be happy about that and really refocus our efforts on ensuring we’re providing an optimal environment for them rather than fearing them.”