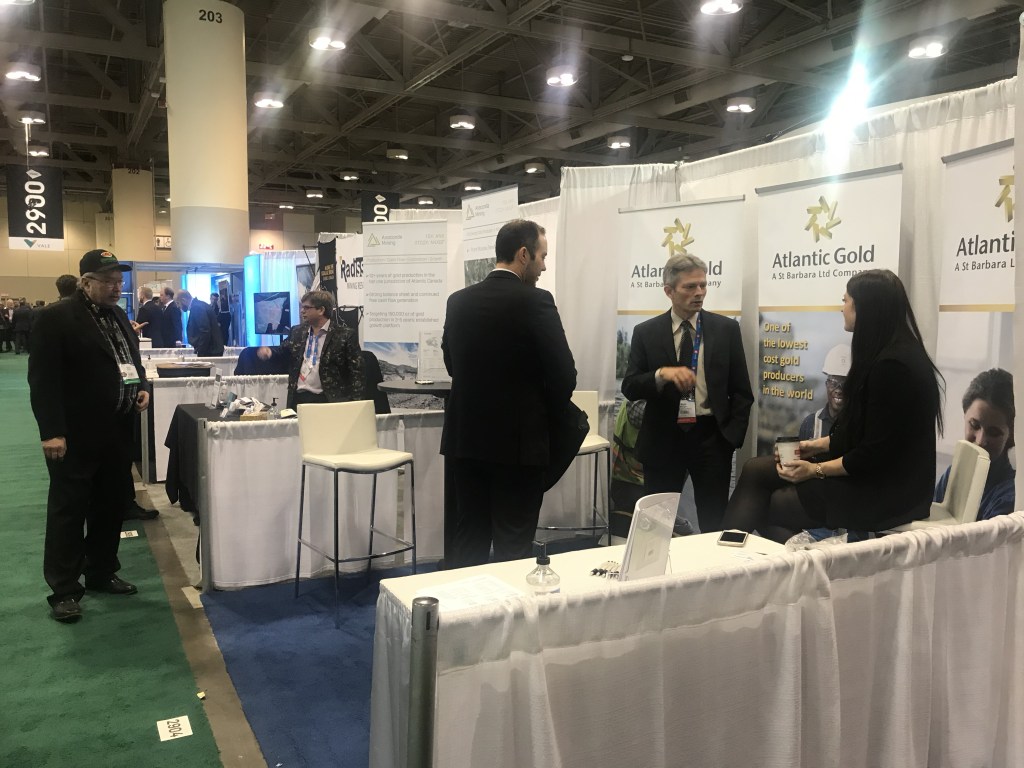 Atlantic Gold “one of the lowest cost gold producers in the world” at 2020 PDAC convention. Photo: Joan Baxter

Atlantic Mining NS Inc., an affiliate of the St. Barbara company Atlantic Gold, which operates the Touquoy open pit gold mine at Moose River, has succeeded in delaying its day in court.

Arraigned in Dartmouth Provincial Court, Atlantic Mining NS asked for and received an adjournment until March 15.

In September 2020, Nova Scotia Environment laid 32 environmental charges against Atlantic Mining NS for alleged infractions between February 2018 and May 2020, which were to have been tested in Dartmouth Provincial Court on January 26, 2021.

However, Atlantic Mining NS requested and was granted an adjournment until March 15, 2021.

As the Halifax Examiner reported here and here, even before the environmental charges have been heard in court, citizen complaints about the negative environmental effects of Atlantic Gold’s activities in the area continue to roll in.

On December 15, 2020, Mitchell Glawson, an avid sport fisher whose family has deep roots in Mooseland and who has a home there, posted photos on the Trout Fishing Nova Scotia Facebook page. The photos showed a muddied brook close to the site where a contractor was excavating clay for Atlantic Gold’s Moose River gold mine. 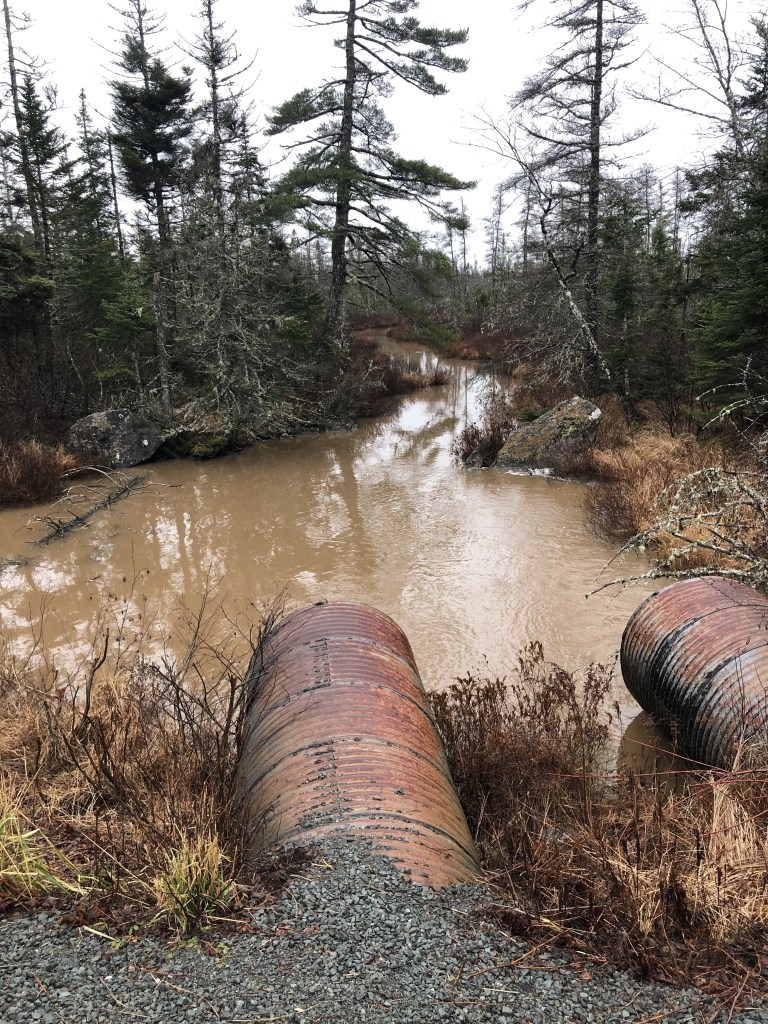 On January 19, 2021, Glawson posted more photos showing that the same thing had happened again. He wrote:

Once again Camp Lake brook was filled with sediments resulting from the clay excavating operations associated with Atlantic Gold (St Barbara’s) Touquoy mine. The photo of the brook was taken Sunday Jan.17th and provided by a friend.

On December 31st I was in the area and noted that silt fencing, straw and hay had been placed to help mitigate the runoff from the exposed clay. This was comforting however these measures were obviously still not sufficient … In the photos it can clearly be seen that the ponds retaining the water are very full and have likely been overflowing, as seen by the sediments on the ground downhill from each. In one case sediments can be seen in wheel ruts outside the sediment fencing, water flowing through blast rock which is clearly brown with sediments. 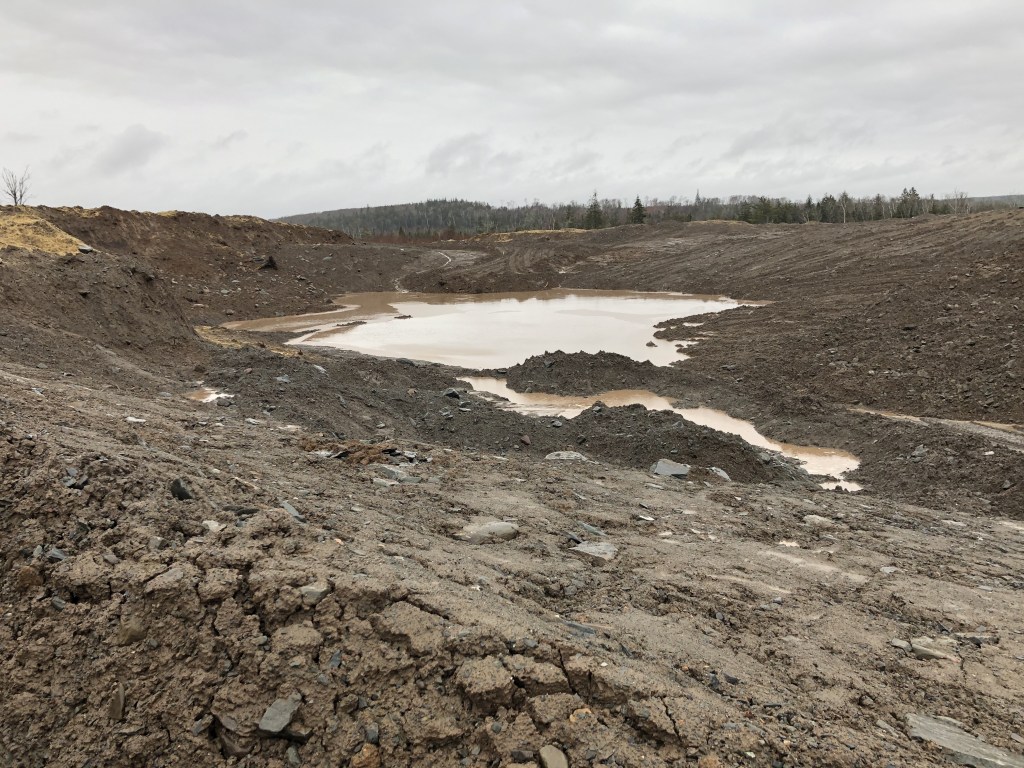 In both December and January, Glawson’s aunt and fellow Mooseland resident Krista Gillis, also made complaints about the muddied brook, concerned about the effect on fish.

The brook runs eventually into Cope Lake and then Scraggy Lake, which in turn flows into Fish River in the Ship Harbour Long Lake Wilderness Area, and then into Lake Charlotte. 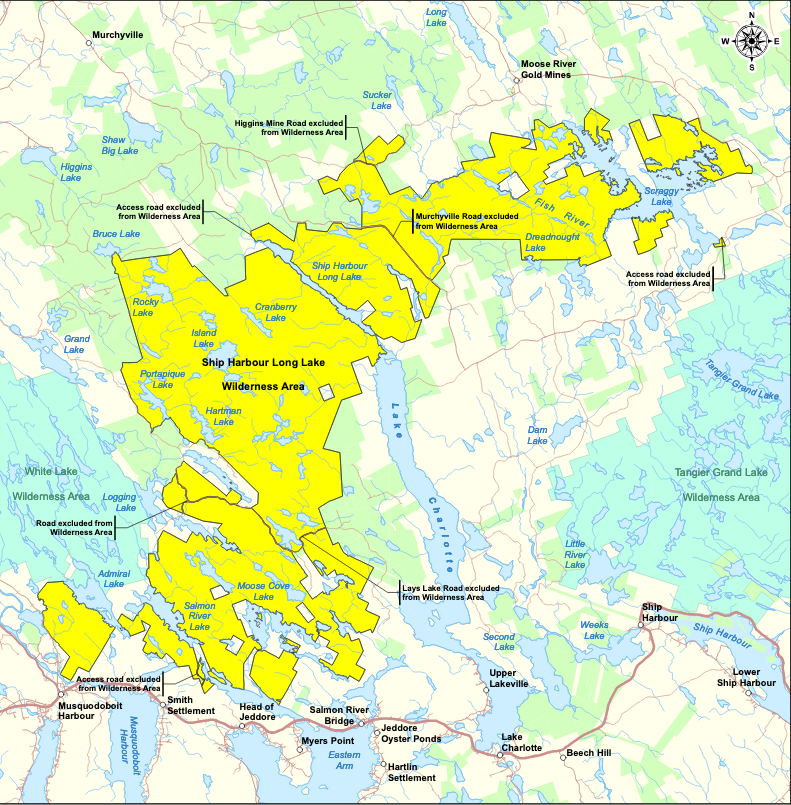 Gillis sent her complaints to Atlantic Gold, the contractor doing the excavation, and also the provincial and federal governments.

As the Examiner reported in December after the first incident, Nova Scotia Environment spokesperson Rachel Boomer said NSE was:

… aware of the complaint relating to siltation at the clay borrow site. Our staff visited the clay borrow pit on December 15 to conduct an inspection, after receiving a report of a release from Atlantic Gold. The incident is still under investigation.

Atlantic Gold, under its industrial approval for Touquoy, has permission to extract clay on the Moose River Mine site for construction purposes. Environmental monitoring associated with any clay removal at the Touquoy site is covered in its industrial approval. We are aware that a contractor for Atlantic Gold is sourcing off-site clay material for construction purposes at the mine. This off-site clay pit is currently not under approval, as it is our understanding that the source site is less than two hectares in area and does not require an approval as per Section 13 (e) of the Activities Designation Regulations.

Gillis told the Examiner that she had also sent her complaints to the federal Department of Fisheries and Oceans, which is responsible for enforcing the Fisheries Act, and thus for protecting fish and fish habitat.

Following the second incident of the muddied brook, the Examiner contacted the federal Department of Fisheries and Oceans (DFO) to find out whether this incident, or any of the 32 environmental charges laid by Nova Scotia Environment, contravened the Fisheries Act.

The exact questions to DFO were:

2. Has DFO laid any charges against Atlantic Mining NS (or any affiliate of Atlantic Gold) for any contraventions of the Fisheries Act at any of its mining or exploration sites? If so, please can you detail those for me.

DFO media relations provided the following frustratingly vague answers, which, for anyone who read this Examiner commentary, may not come as a surprise:

Fisheries and Oceans Canada (DFO) is aware of the recent reports and activity regarding Atlantic Mining Nova Scotia.

DFO’s role in this case is to continue to monitor and work with our Provincial and Federal partners that are presently looking into the issue.

DFO and Environment and Climate Change Canada have responsibilities under the Fisheries Act. We will continue to support each other in the review of relevant elements to effects to fish and fish habitat related to sedimentation.

One thing that can be distilled from these DFO answers-that-answer-nothing is that Atlantic Gold seems to be using up a fair amount of both provincial and federal government officials’ time, even more so if one factors in the government resources that go into the work of Canada’s Impact Assessment Agency and the evaluation of the three additional open pit mines that the company has proposed for Nova Scotia’s Eastern Shore — at Beaver Dam, Fifteen Mile Stream, and Cochrane Hill.

One might suppose that all the government staff time and resources would be repaid many times over in taxes and royalties that Atlantic Mining NS pays to governments for the gold it extracts from the Moose River and the profits that generates.

One might hope that, but it seems that one would be wrong.

According to Canada’s Extractive Sector Transparency Measures Act (ESTMA), passed in 2014, corporations that extract oil and gas or minerals and are registered on a Canadian stock exchange are legally bound to report all payments they make to governments.

Before Atlantic Gold was acquired in 2019 by St. Barbara for $722 million, it was registered on the Toronto Stock Exchange, and was thus obliged to disclose to ESTMA all its payments to all governments.

Atlantic Gold’s ESTMA report for 2017, the year it began production, states that the company paid $0 in taxes to any level of government (municipal, provincial, federal) and $0 in royalties.

Atlantic Gold’s ESTMA report for 2018 states that the company again paid $0 in taxes to any level of government, and just $1.18 million in royalties to the province of Nova Scotia.[1]

In its January 2019 corporate presentation, “Lowest Cost Gold Producer in the Sector,” Atlantic Gold reported that in 2018 the Moose River mine produced 90,531 ounces of gold. With the average price for gold that year $1,643 an ounce, the value of the gold produced in 2018 at Touquoy was upwards of $148 million. 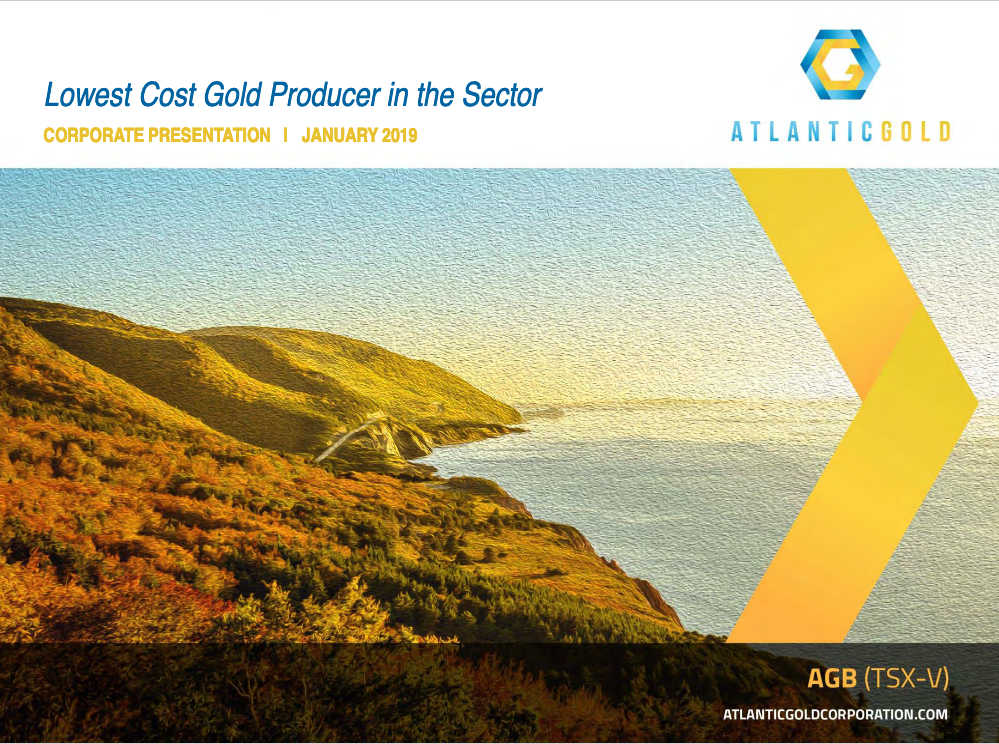 After Atlantic Gold was sold to St. Barbara, its ESTMA reports disappeared from the Natural Resources of Canada website, as the Examiner reported here.

In October 2019, the Examiner contacted Natural Resources Canada to ask why Atlantic Gold’s reports were no longer available, and received this reply:

A company that is delisted from a Canadian stock exchange may no longer qualify as an ESTMA reporting entity, or be required to publish reports. However, the ESTMA requires reports to be made available to the public for a period of five years, and this obligation continues even if a company is acquired by an entity that is not subject to the ESTMA.  We appreciate you bringing the broken link to our attention and will look into the matter.

Natural Resources Canada is responsible for administering and enforcing the Act, and may verify compliance and follow up with companies that have broken links to ESTMA reports to ensure that these reports remain accessible to the public.

Finally, after the Examiner sent several more emails about the “broken links” to the Atlantic Gold ESTMA reports, Natural Resources Canada sent copies of the company’s reports for 2017 and 2018, but noted that responsibility for the links rested with the company.

Since then, Atlantic Gold’s 2017 and 2018 reports have again become available on the ESTMA site, uploaded by St. Barbara, although they don’t seem to be accessible on the company’s own website, and if they are, they are extremely well hidden.

In October 2020, Atlantic Mining NS submitted its 2019 report to ESTMA.

As was the case in previous years, in 2019 the company mining gold in Moose River reported paying $0 in taxes to any level of government. Its royalties to the government of Nova Scotia amounted to just $1.33 million.

In his message to shareholders in St. Barbara’s 2020 Annual Report, Non-Executive Chair Tim Netscher boasted that since the company acquired Atlantic Gold in 2019, it had seen a “record” full year production at the Touquoy mine in Moose River of 106,663 ounces.

With gold prices in 2019 averaging about $1,800 an ounce, that means the value of the gold mined in Moose River would have been upwards of $191 million.

A poster at the “open house” that Atlantic Gold hosted in the spring of 2018 for the proposed mine for Cochrane Hill said the mine would operate for seven years and in that time the “estimated combined provincial and federal taxes” would be just $62.5 million. The poster didn’t say whether those included payroll taxes paid by employees (“180 – 190” of them), or by the corporation itself. Either way, the amount — a mere $8.9 million a year — is insignificant, given all the short- and long-term environmental liabilities, and the wear and tear on public roads.

A poster at the March 2018 open house Atlantic Gold hosted in Sheer Harbour for the proposed mine at Fifteen Mile Stream showed that over the six years of its operation, there would be an “estimated combined provincial and federal taxes” of $90.2 million. Once again, it was not clear who, exactly would be paying those taxes, the employees (who would number “150 – 165”) or the corporation.

Atlantic Gold likes to boast, based on production at its open pit gold mine in Moose River, that it is “one of the lowest cost gold producers in the world.”

One might ask what, exactly, about Atlantic Gold’s gold mining operations in Nova Scotia makes that possible.

[1] On page 2 of the Atlantic Gold 2018 ESTMA report submitted in May 2019, the amount of $2,770,000 paid to the Nova Scotia Minister of Natural Resources is incorrectly placed under “Royalties” when it is actually described in the “Notes” column as “In-kind payment reclamation bond values at fair market value of the bond.” Royalties paid to the Minister of Finance total $1,180,148. This is confirmed on page 3 of the report.