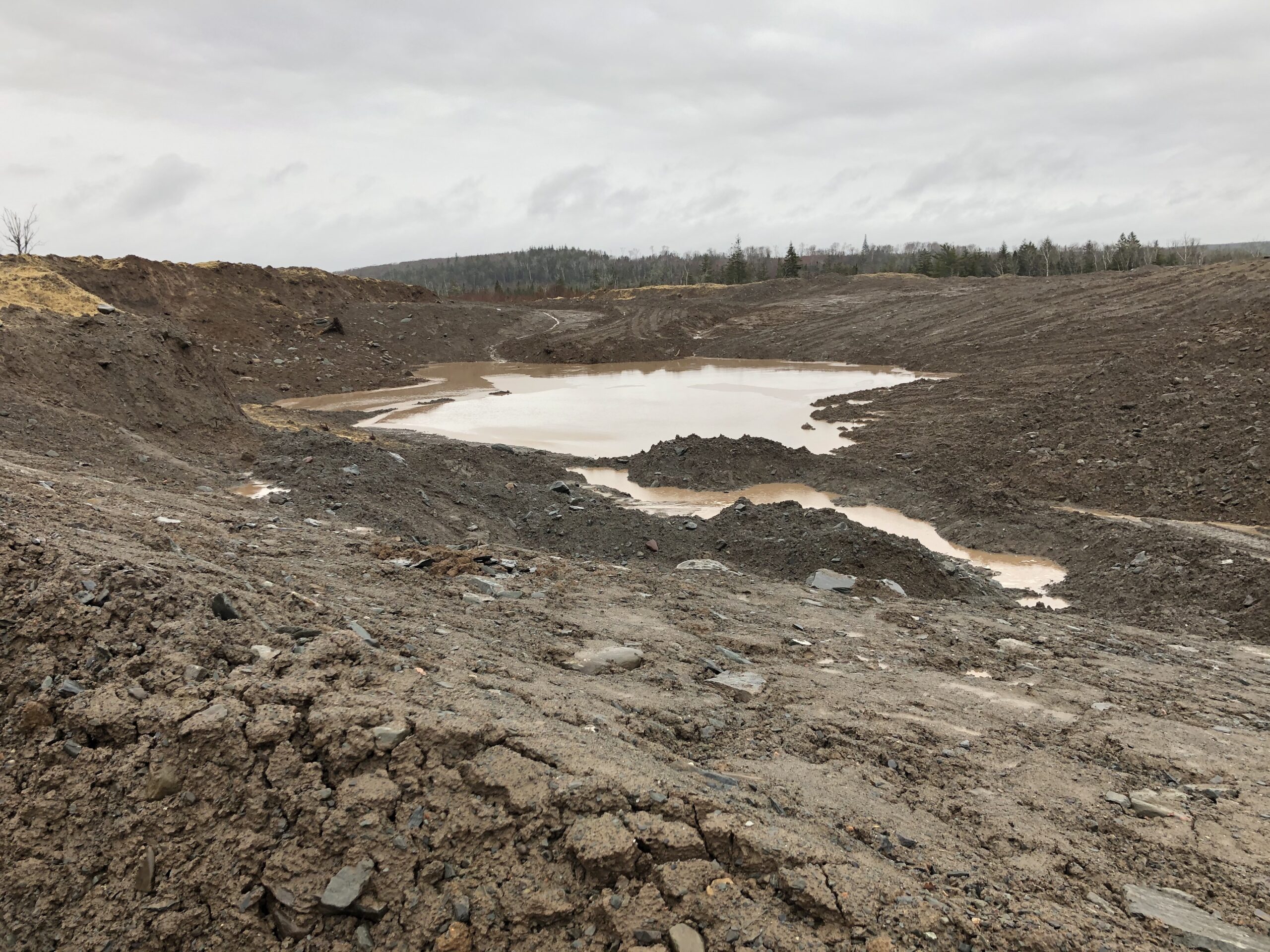 A lawyer for Atlantic Mining Nova Scotia was in court yesterday to enter pleas on a total of 32 charges laid under the province’s Environment Act related to the company’s open-pit gold mining operation at Moose River and gold exploration at Fifteen Mile Stream on the Eastern Shore — but those pleas weren’t entered.

In addition to the 32 provincial charges, the Halifax Examiner learned Atlantic Mining Nova Scotia, an affiliate of Atlantic Gold that is owned by Australia’s St Barbara Ltd, is also facing three charges filed under the federal Fisheries Act.

The lawyer for the mining company, Robert Grant, requested an adjournment — the third adjournment since the company first appeared in provincial court in January this year — indicating discussions between the prosecutors and the company are continuing. Some form of settlement agreement related to the charges and fine is expected to be presented to Judge Alanna Murphy in July, at a fourth hearing.

The three new charges laid by Environment Canada on March 21, 2021 under the federal Fisheries Act relate to sedimentation and fish habitat. The non-compliance with federal regulations is alleged to have happened between September 27, 2018 and April 29, 2020. Court documents list these three charges:

Fail to sample effluent for an acute lethality test from an unauthorized deposit of a deleterious substance, to wit: sediment bearing effluent, into water frequented by fish, to wit: an unnamed, fish bearing watercourse at the Touquoy mine site, in violation of s. 31.1(1) of the Metal and Diamond Mining Effluent Regulations, and did thereby commit an offence contrary ta s. 78 of the Fisheries Act.

Fail to notify without delay of an unauthorized deposit of a deleterious substance, to wit: sediment bearing effluent, into water frequented by fish, to wit: an unnamed, fish bearing watercourse at the Touquoy mine site, in violation of s. 38(5) of the Fisheries Act, and did thereby commit an offence contrary to s. 78 of the Fisheries Act.

Fall to provide a written report of an unauthorized deposit of a deleterious substance, to wit: sediment bearing effluent into water frequented by fish, to wit: an unnamed, fish bearing watercourse at the Touquoy mine site, in violation of s. 38(7) of the Fisheries Act, and did thereby commit an offence contrary to s. 78 of the Fisheries Act.

The lawyer for Atlantic Mining has yet to enter a plea to these charges or to the 32 others that Nova Scotia Environment and Climate Change filed in September 2020 under the Nova Scotia Environment Act. As the Halifax Examiner reported here, most of the charges relate to silty runoff at the Moose River mine site between February 8, 2018 and May 9, 2020.

Thirteen of the 32 charges are for “releasing [a] substance into [the] environment in [an] amount, concentration or level in excess of approval level of regulations,” in contravention of Section 68(2) of the Environment Act.

Another 16 charges are for the failure “to comply with Terms and Conditions of an Approval,” in contravention of Section 158(f) of the Environment Act and Condition 15d and 7a of the Industrial Approval 2012-084244-05.

Essentially, a mine site has to have a plan to deal with storms. Section 15d of the Industrial Approval states:

The Site shall be developed and maintained to prevent surface water contaminants from being discharged into a watercourse, wetland, water resource, or beyond the property boundary …

A spokesperson for Atlantic Mining is reported to have blamed “heavy rainfall” for the incidents which took place on a variety of dates during the period covered by the charges. In January 2021, Joan Baxter reported for the Examiner on the charges and her thorough examination of weather records for those dates suggests the rainfall levels rarely met, or exceeded, the levels Environment Canada defines as heavy rainfall.

Three other charges laid under the Nova Scotia Environment Act relate to withdrawing water for exploration drilling at locations 30 kilometres from the Moose River mine at Seloam Brook and five kilometres northeast at Jed Lake, close to Fifteen Mile Stream, where Atlantic Gold has planned one of three new gold mines on the Eastern Shore.

The timing of the court case is awkward for the mining company, which is presently trying to convince citizens and the provincial government to support the opening of two additional gold mines proposed for Beaver Dam and Fifteen Mile Stream on the Eastern Shore. Those impact assessments are underway which is currently undergoing a federal assessment by the Impact Assessment Agency of Canada.

The company is also preparing to submit a list of modifications to its Touquoy open pit gold mine at Moose River to Nova Scotia Environment and Climate Change for a provincial assessment, and held an online “information session” about the proposed changes on May 31.

Atlantic Mining will be in Provincial Court on July 7 to enter pleas on the 35 charges under the federal Fisheries Act and NS Environment Act.

With files from Joan Baxter.