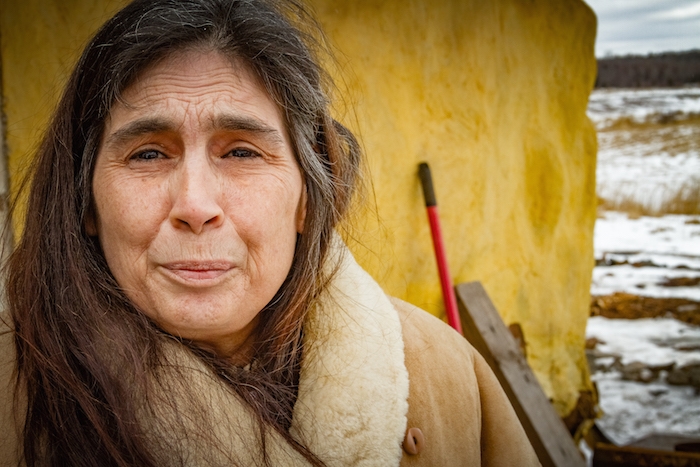 A group of 40-50 people opposed to a plan by Alton Natural Gas Storage Inc. to dump brine into the Shubenacadie River packed a courtroom in Halifax yesterday afternoon.

They were there to support protesters Dale Poulette, a Mi’kmaw man who considers himself a traditional water protector, and Rachael Greenland-Smith, an environmental researcher. Both are named in a temporary injunction sought by the company.

Justice Gerald Moir will deliver an oral decision March 18 in a case where the right to own and enjoy private property clashes with aboriginal and treaty rights.

“This is at its heart a simple trespassing case,” said lawyer Robert Grant for Alton Gas. “The protesters have erected a barricade and interfered with access to private property.”

“There is more at stake in this case than a company’s property rights,” countered EcoJustice lawyer James Gunvaldsen Klaassen, who is representing the two protesters. “We believe Dale Poulette can rely on aboriginal and treaty rights, and this must result in the dismissal of the injunction.”

The requested injunction asks the court to order Poulette and Greenland-Smith from “interfering or attempting to interfere by means of force” with anyone entering or leaving riverside properties owned by Alton Gas near Fort Ellis. The company bought the property in 2008, and later this year, plans to hollow out two underground salt caverns to store natural gas. It would then flush out brine from the excavation into the Shubenacadie River about 12 kilometres from the site.

Alton lawyer Robert Grant told the court a power failure this past January damaged equipment in the area of the pipes and pumphouse beside the river. Grant referenced an email from Nova Scotia Power indicating it won’t send a crew to restore electricity until Alton can guarantee safe and reliable access to the site.

The injunction is the result of years of tension and mistrust that started with an environmental concern and led to protest and occupation. Alton’s lawyer argued that Dale Poulette has occupied a straw bale hut constructed on or near the access road to the river for at least 18 months. During that time, Grant detailed eight to 10 instances where Poulette has “behaved erratically, swore, made threatening statements, or aggressively confronted” Alton Gas manager Rob Turner when Turner visited the property. Turner says Poulette once pushed his chest into him to block him from proceeding. On two other occasions, Grant said the Mi’kmaw protester told Turner “he would need to get a court injunction to get in here.”

In an interview outside the court, Dale Poulette didn’t deny he may have intimidated Turner but claimed Turner had once used physical force to intimidate him. No charges resulted. Poulette also contends what he calls the “truck house” located inside a locked gate on company property is not blocking access to the pipes and equipment by the river. The straw bale structure went up in the fall of 2016 to raise public awareness of growing opposition to the gas storage project by some members of the neighbouring Sipekne’katik First Nation (Indian Brook) and other concerned citizens. More recently, social justice advocate Dorene Bernard has involved a women’s group called the Grassroots Grandmothers Circle who say its purpose and duty are to protect the water.

Lawyer James Klaassen argues Poulette’s hunkering down on the Alton Gas property is an example of exercising a treaty right which usually belongs to a group of people, but in this instance was conferred upon him by the Grandmothers’ elders’ group during a ceremony two years ago. “Poulette and Greenland-Smith are not trespassers,” argues Klaassen; “they are water protecters.” He cited two recent British Columbia cases to suggest the duty to protect the environment from potential harm can sometimes override property rights.

Alton lawyer Robert Grant says that under that interpretation of case law, anyone could assert a claim and trespass without fear of consequence. He argued that Poulette has no evidence or documentation to show his protest is authorized by any of the 13 First Nations in Nova Scotia. Grant says this dispute “is not about treaty rights or consultation.”

Klaassen told Justice Gerald Moir there are two reasons why he should dismiss the company’s application for an injunction.

First, Klaassen argued Alton had failed to demonstrate it would suffer “irreparable harm” if protesters were allowed to remain. He pointed out that after 12 years, the company still isn’t operating. No brining work has yet begun, although Alton has the necessary provincial approvals and is waiting for a new regulation prepared by Environment and Climate Change Canada. It will allow Alton to deposit and flush 1.3 million cubic metres of brine over three years as long as the salt content does not exceed the average salinity of the Shubenacadie tidal estuary.

Secondly, Klaassen argued the wording of the injunction to outlaw interference by the protestors doesn’t say anything about trespassing, evicting them from the property, or tearing down the hut. He described the wording as “vague,” a characterization that prompted Justice Moir to jump in and say, “I’m giving you advance notice that I am not going to sign something that is vague.”

The judge did, however, choose to reserve his decision until Monday on whether to grant the company a temporary injunction. April 4 was set as the hearing date for a permanent injunction. A lawyer for the Justice Department representing the Province of Nova Scotia told the court the province has “no position” with regards to this dispute.