The final chapter is about to be written in the 10-year saga of the Alton natural gas storage project.

A Decommissioning and Reclamation Plan has been filed with the province and interested citizens have until January 25 to comment. The 67-page document Plan can be found here.

Essentially, the approach being taken by the project owner, AltaGas of Calgary, is to leave the buried PVC pipelines in the ground and dismantle the buildings above ground at two separate sites.

One site is beside agricultural land along the Shubenacadie River near Fort Ellis, where opponents of the project camped out for months in a lean-to known as a Treaty House.

The second site is near Alton, up the hill on the Brentwood Road, where salt caverns were supposed to be hollowed out but never were because the gas storage venture never operated. 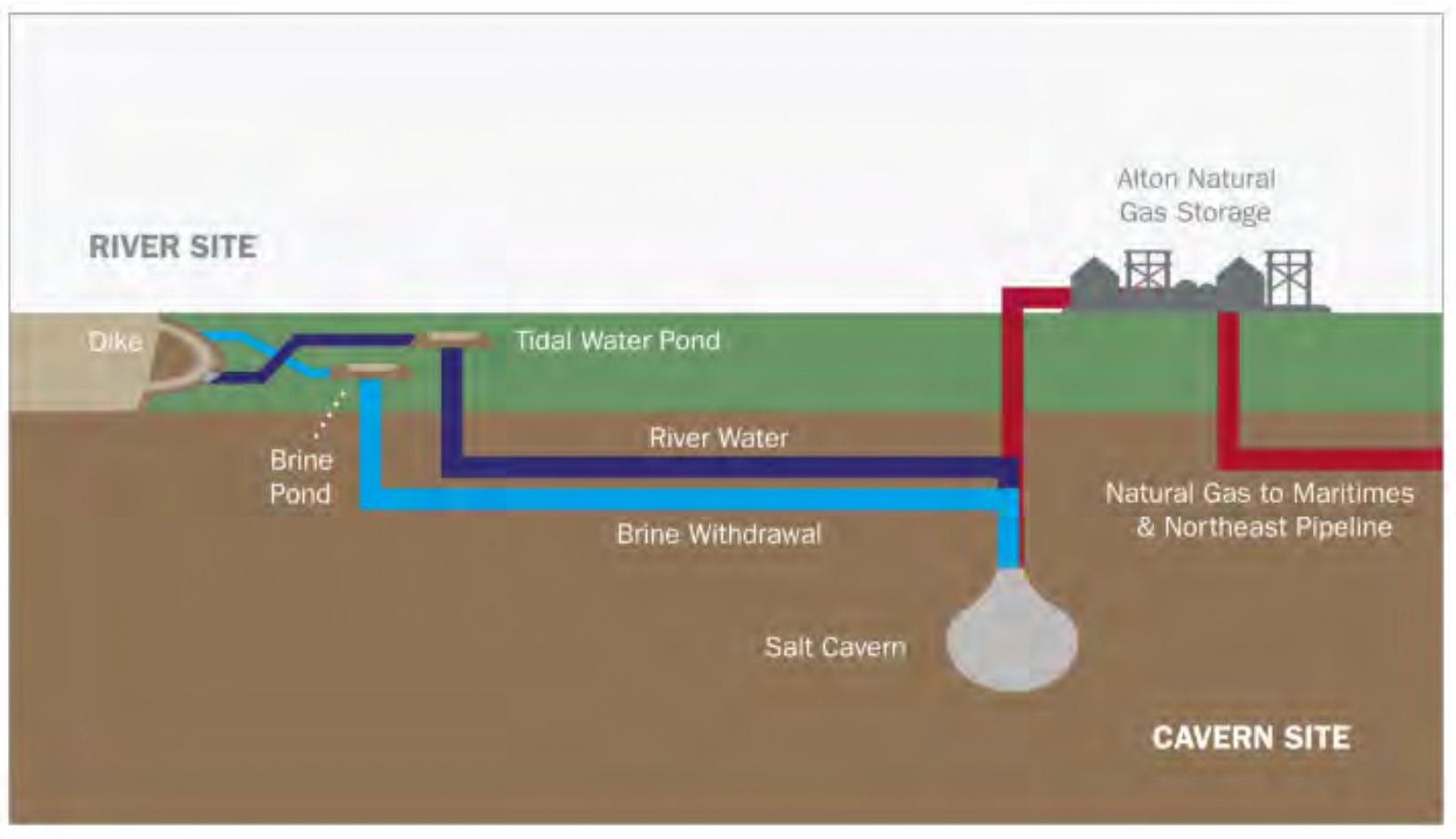 A schematic of the Alton Gas site. Graphic: AltaGas

It goes on to say that a “successful” program would minimize the environmental impacts of dismantling activities, consider the re-use of facilities and land, reduce public safety risk, and “provide a means to invite input from local communities and the Mi’kmaq of Nova Scotia on the decommissioning activities and objectives proposed.”

A decommissioning plan was required in order for the project to receive its previous industrial approval. If this plan is approved by the province, de-commissioning could begin as early as next summer and wind up by the end of 2022.

The original plan put forward by AltaGas in 2011 was to carve out two caverns from an underground salt formation to store natural gas flowing from Sable Island offshore Nova Scotia.

A new 10-kilometre pipeline would be built to connect the cavern site to the nearby Maritimes and Northeast pipeline. Neither of those things happened, although Alton Natural Gas Storage did drill three wells in preparation for the caverns and it also constructed fenced-in facilities such as water tanks and a building to store necessary machinery. 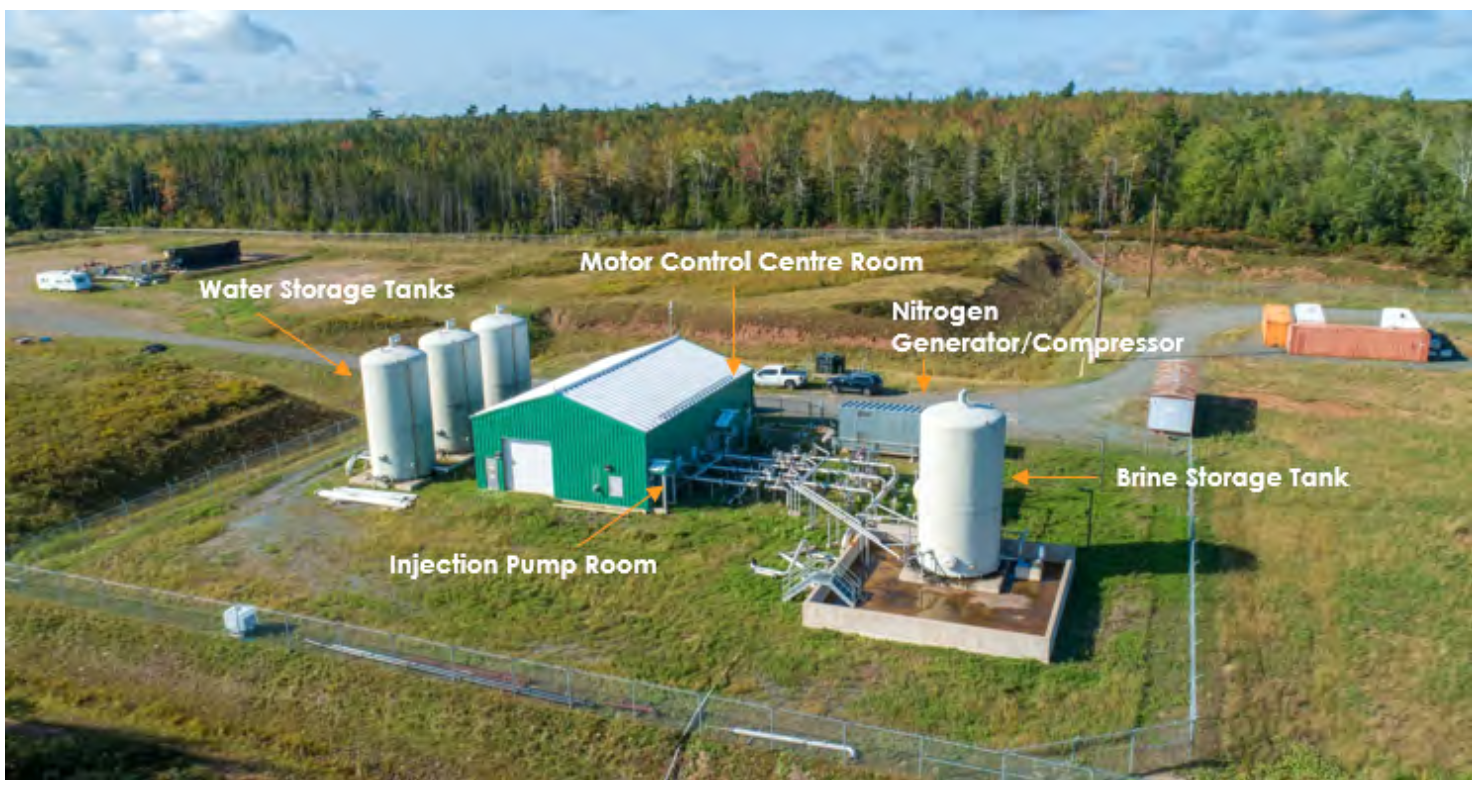 The building site at the Alton Gas project. Photo: AltaGas

The decommissioning plan for the cavern site includes dismantling and selling off the three large storage tanks for water and one tank for brine, as well as a nitrogen compressor, and other equipment.

The wells, which were never brined or hollowed out to become caverns, will be decommissioned after discussions with the Utility and Review Board, to meet CSA standards. Shallowly buried PVC piping at this site will be removed. The decommissioning plan proposes that the steel frame building remain standing so that the Limited Partnership that owns the land can attempt to find a future buyer for the site.

Wells drilled at nine locations to monitor the water table for any change resulting from the gas storage project will be plugged to reduce the risk to public safety. The potential impact on the water table was a concern raised by neighbouring residents but the project never progressed far enough to test it.

What happens to underground pipelines?

In 2014, pipes were laid to pump water from the Shubenacadie River 12 kilometres away to dissolve the salt formation near Alton and create storage for the gas one kilometre below the ground.

Another set of underground plastic pipes was installed to carry the salt and water mixture (“brine”) back to the Shubenacadie River “for release under closely monitored conditions,” according to the decommissioning plan.

A few of the dozens of conditions included storing the brine in an artificial pond to avoid releasing it during fish spawning seasons or at low tide. A dike and a diversion channel were created to reduce the impact on the fish that make their home in the Shubenacadie River, including endangered species such as the striped bass. The Sipekne’katik First Nation and several environmental groups opposed to the project were concerned that the briny discharge could have a “deleterious” impact on traditional fishing grounds. 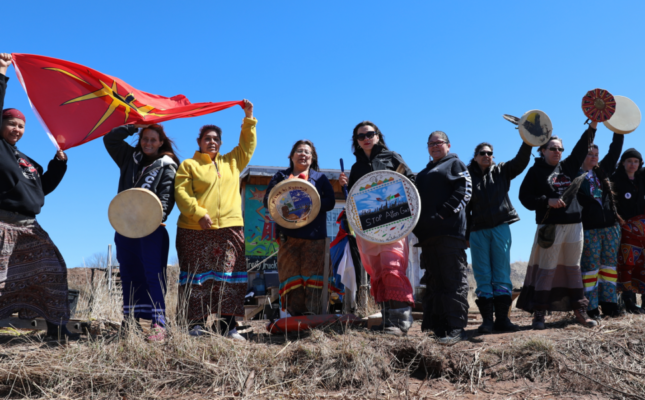 Mi’kmaw water protectors at the Alton Gas site. Photo is a still from film “There’s Something In The Water,” courtesy Elliot Page

Appeals through the courts of the provincial Environment Department’s approval of the project were ultimately unsuccessful but resulted in three to four years of delay, by which time the economics of the project had changed and AltaGas, the company that spent $75 million trying to develop the project, lost interest.

In 2018, AltaGas sold off its companies that distributed natural gas — including Heritage Gas in Nova Scotia — to concentrate on other aspects of its business. Without a gas distributor, developing a storage project without a ready supply of natural gas once Sable was depleted didn’t look profitable.

The decommissioning plan filed with the province says excavating the two sets of pipelines buried 1.6 metres deep would do more harm by disrupting the environment than leaving them in place. As currently proposed, above-ground structures at the Shubenacadie River site such as the pumphouse and electrical shed would be dismantled and the equipment moved and sold. 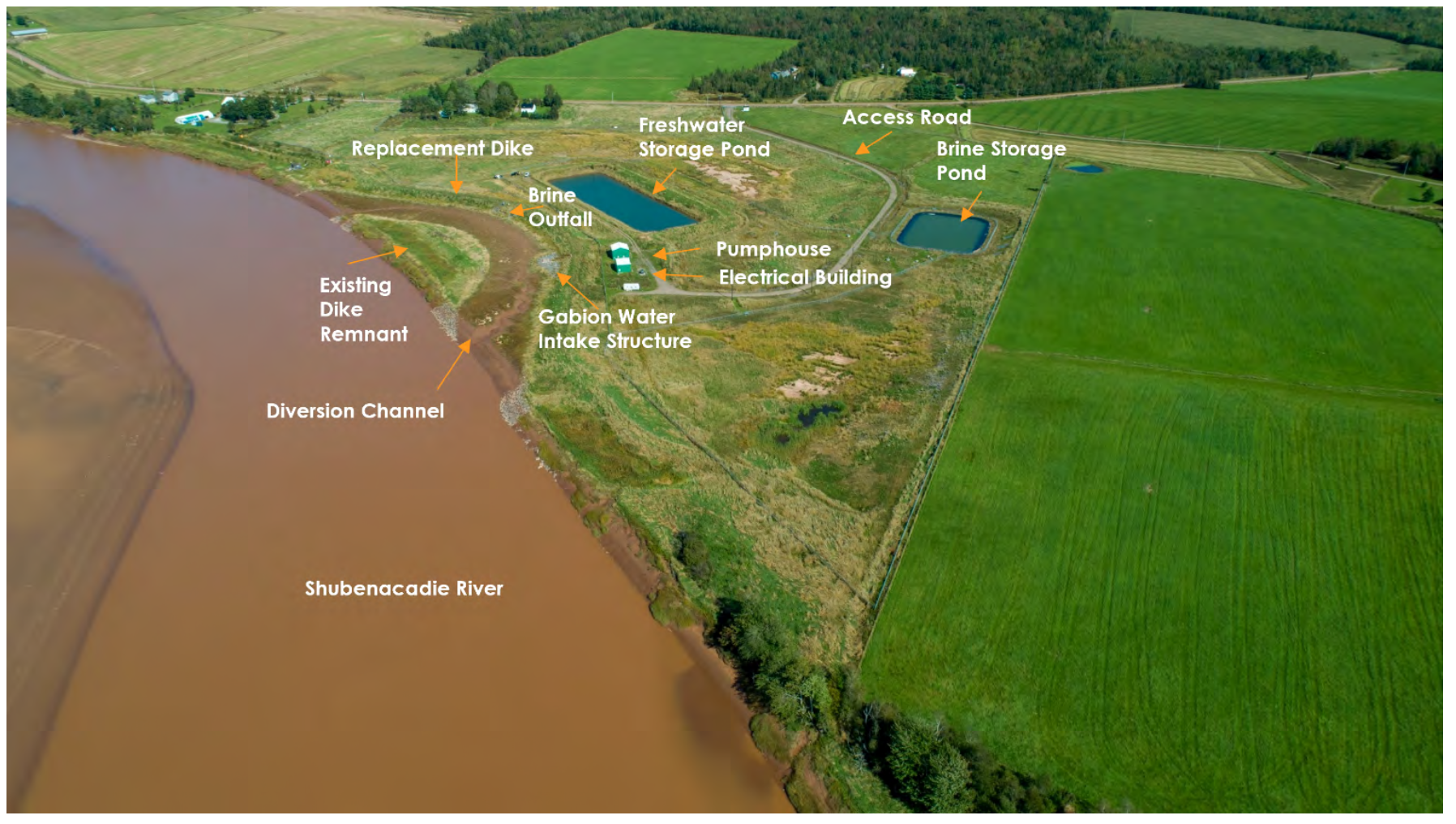 An aerial view of the Alton Gas project. Photo: AltaGas

The site would be re-seeded to return to its previous use as agricultural or pasture land. As for the 12 kilometres of PVC pipelines, here’s an excerpt from the decommissioning plan:

In-ground structures (e.g., piping) would be abandoned in place where allowed by regulatory and legal requirements and where they demonstrate no public health and safety risk.

The plan also proposes making no changes to the artificial “diversion channel” constructed to reduce the impact to fish from discharging briny water directly into the river:

Alton Natural Gas Storage proposes to leave the constructed diversion channel in place. Since its construction in 2014, the diversion channel has naturally infilled and revegetated. The infilled channel causes no adverse effect on fish and fish habitat and does not preclude the river or shoreline from fulfilling similar ecological functions and uses that existed before the Project.

The natural infilling of the diversion channel has created salt marsh habitat. Salt marshes are extremely productive wetlands. More than 50% of salt marsh habitat in Nova Scotia has been lost, mostly as a result of diking to convert salt marsh to agricultural land. 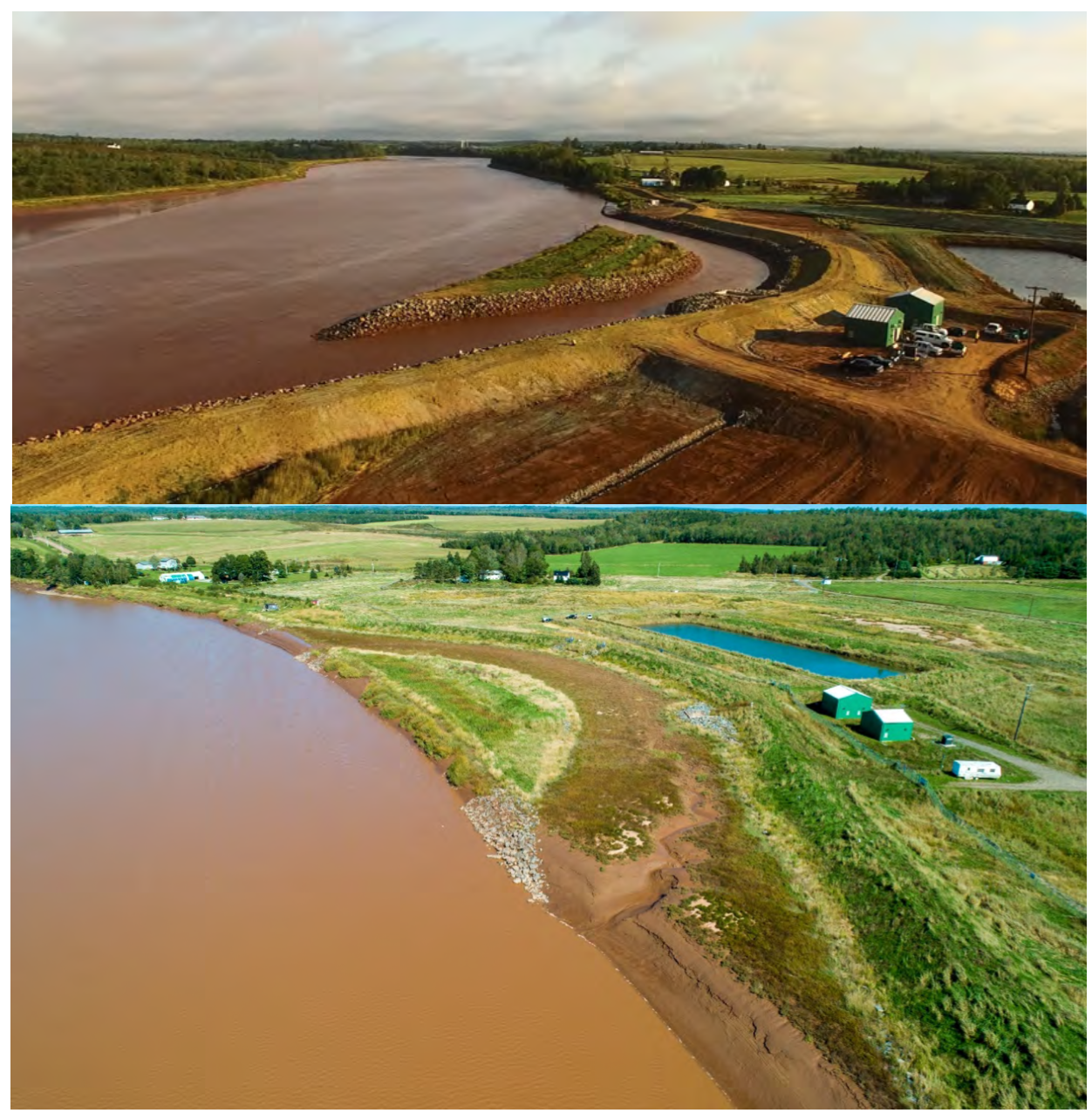 The Alton Gas Storage Project plans to drain the freshwater and brine holding ponds near the river. The decommissioning plan would also remove a water intake structure called a gabion wall that controls water levels in the diversion channel. The rock wall sits above the high water mark.

“Key mitigation for decommissioning and reclamation activities at the River Site pertains to the avoidance of harmful alteration, disruption or destruction of fish habitat in the tidal Shubenacadie River as well as avoidance of disruption/destruction of developing salt marsh habitat,” reads the plan. “Work in the diversion channel will be avoided or minimized to the extent possible.”