You are here: Home / City Hall / Will the Sawmill River see the light of day? Yes. Will it look like a river? Maybe. 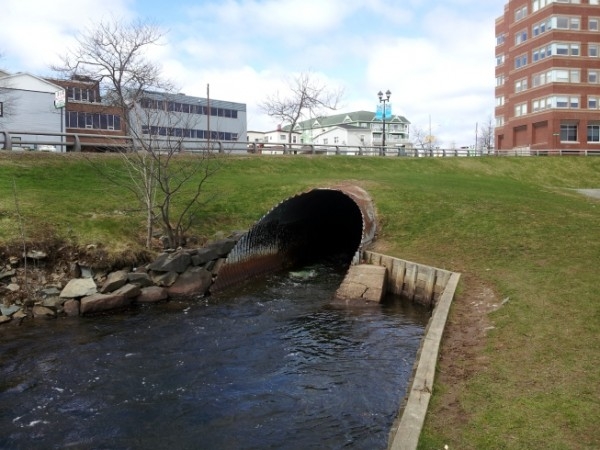 About 75 people gathered last night for a lively discussion about the prospects for a daylighted Sawmill River in downtown Dartmouth, organized by the Ecology Action Centre’s water team.

The Sawmill runs from Sullivan’s Pond down into Halifax Harbour, formerly a key piece of the Shubenacadie Canal, and before that, the river system that was used to connect the Minas Basin with the Halifax Harbour.

But you’ve probably never seen it, because for 40 years, it’s been buried underground.

That will eventually change. A host of factors have aligned that seem to make the daylighting of the Sawmill inevitable: Halifax Water has to replace the too-small, too-old pipe currently carrying the river into harbour. The Department of Fisheries and Oceans requires that the replacement infrastructure we build also replace the fish passage that used to be there, so that gaspereau and trout can find their way back into Sullivan’s Pond, Lake Banook and beyond. A city-sponsored Canal Greenway project already underway in the area. And, HRM has a daylighting policy, approved in 2006, which requires us to consider daylighting as an option whenever existing stormwater infrastructure needs repair or replacement.

Now one more factor is coming into play: a renewed downtown Dartmouth plan to allow for more residential density requires the realignment of a major intersection: Alderney Drive where it meets Portland Street and Prince Albert. The realignment would route Alderney through an expanded Mill Lane, having it join Portland Street a little farther east, and would result in a tiny stretch of Alderney Drive becoming redundant. And what lies directly beneath this tiny stretch of boulevard? You guessed it: the Sawmill River. If HRM were indeed to free up this land, and then proceed to make it available for parkland, the Sawmill daylighting project could be dramatically altered.

Right now, Halifax Water is sitting on a massive pre-design report, focused on the options for replacing its infrastructure within its allotted space and meeting standards set out by DFO. (Beware… the pdf of the report is 361 pages.) On the daylighting front, the best the pre-design report has to offer is a portion of “engineered open channel” as opposed to the “naturalized daylight channel” that most of the crowd last night was clearly envisioning. 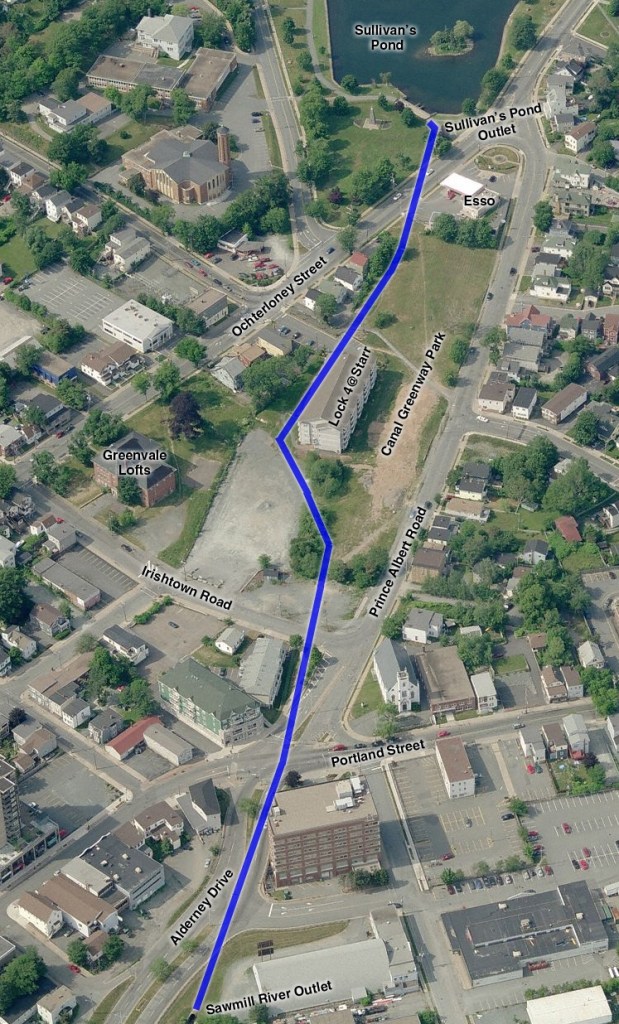 Approximate location of Sawmill River pipe (in blue), from Spacing.ca

Jamie Hannam, director of engineering with Halifax Water, pointed out that the current pre-design works with the space that the utility has at its disposal. A naturalized approach could require two to four times as much space, he said.

Walter Regan of the Sackville Rivers Association says, “what we’ve got now is half a loaf,” referring to the current plan that will see fish returned to the river system. A fish lover and tireless river protector, Regan is already tickled with the simple requirement by DFO to restore fish access. But he, along with the rest of the crowd gathered last night (including current councillor Gloria McCluskey and many of the candidates vying for her seat in the fall) are clearly vying for the full loaf: a naturalized stream right in the heart of the city.

It’s interesting to note that the potential for additional lands, at least in the form of a realigned Alderney Drive, is essentially pinned to a revised downtown Dartmouth plan, which has been in the works for about five years. The plan makes way for far more density in downtown Dartmouth, which is notoriously underpopulated. So the naturalization of this urban river might actually rely on our willingness to really urbanize our downtown.

The city’s chief urban designer, Jacob Ritchie, says he hopes the Dartmouth plan will go up for approval before the Centre Plan is scheduled to wrap up, in December 2016.

Jamie Hannam indicated that there is time to change the re-designed Sawmill. The current pipe system can still be repaired as needed, allowing more time for our planners and politicians get their Sullivan’s Pond ducks in a row.