You are here: Home / City Hall / Who are we building bike lanes for, anyway?

After the announcement about $25 million in funding towards a minimum bike grid for central Halifax and Dartmouth, there was a lot of talk about who would benefit from such an investment. One of the main numbers that got thrown around was 1%, a perfectly good statistic supplied by Statistics Canada, as far as it goes. It refers to the 1% of working people over age 15 in HRM that reported their main mode of commuting to work was by bike during the 2016 census.

If you follow Councillor Matt Whitman (assuming he allows you to follow him), you will see that “the 1%” gets mentioned a lot in his social media feeds, apparently alluding to the term as coined during the Occupy Wall Street movement, which during the protests referred to the richest 1% of Americans, who own about 40% of the country’s wealth. I guess Whitman’s idea is to paint people riding bikes as wealthy elites.

It’s a clever joke, but the reality is likely very different. A study out of Simon Fraser University surveying people in three mid-sized Canadian cities including Halifax, found that the lower the household income, the higher the rate of bike-riding as primary mode of transportation.

It appears unlikely that 1% of people who bike to work in HRM are the same 1% controlling an outlandish share of our wealth.

Though, to be fair, sometimes cycling advocates themselves can help feed this perception.

Who are those "best people", and what makes them better than all the others? https://t.co/kxGHQ2wplI

“A number of people are wondering how we can do more comprehensive bike advocacy that includes people who can’t afford to get involved,” said Adonia Lugo, an anthropologist who left her job at the League of American Cyclists earlier this year because of a disconnect she perceived between bike advocates and those who ride bicycles regularly. “They’re on bikes, so they should be involved.”

“The big issue with why this matters is, there’s this cultural gap between bike advocates and others who bike,” she continued. “The strategy became, to market bicycling as an urban lifestyle. You don’t do it because it’s cheap and you need to get somewhere. It’s presented as an opportunity to be part of urban chic fashion.”

There are problems with using the work-commute 1% as the actual snapshot of people biking in Halifax. First and most obviously, it outright excludes kids, students, and unemployed people, and since all these groups share the need to move around on a daily basis, that’s a pretty significant gap.

The census question on commuting also poses an issue for multimodal commuters. Personally, over the course of a year I use an almost an even split between transit, biking, and walking to get to work, with a sprinkling of driving thrown in. But despite that mix, I have to just pick one main mode on the census questionnaire.

Luckily, where the census drops the ball on actual mode share, the Dalhousie Transportation Collaboratory (DalTRAC) is picking it up.

In 2018, DalTRAC spearheaded a Halifax Regional Municipality Travel Activity Study, a randomized survey of over 2,300 HRM residents looking at all the trips they make in a sample day.

When you look at the breakdown by type of trip, the DalTRAC numbers for “home-based work” trips are much more in line with the census numbers, which show Halifax with 77.7% of people commuting by car, 11.8% commuting by transit, 8.2% commuting by walking, and 1% commuting by bike. It’s the other types of trips that seem to upset the work-commute pattern, particularly home to school trips, which have a whopping 31% active mode share.

An interesting note: the average transit mode share for all trip types was only 6%, even though 8.5% of respondents owned a monthly transit pass, showing that Halifax’s transit system really is geared towards work commuters as opposed to all-purpose riders.

While there are still gaps in DalTRAC’s survey coverage (information on trips for 1.8 persons per household was provided, when average household size was actually 2.7), by including all trip types, and not excluding students and unemployed people, DalTRAC gets a much more complete picture of how people are getting around in HRM.

Of course, looking at the numbers for all of HRM might present its own problem, especially when discussing infrastructure designed for moving around the regional centre, such as the currently proposed minimum bike network. HRM is roughly the size of PEI, so how people move around from one area to the next is bound to be different.

Unfortunately, more drilled-down data from DalTRAC has not been released, so it’s back to the 2016 census for a look at mode shares for work commutes. Let’s use one of the best tools on the internet, Censusmapper, to visualize all this. 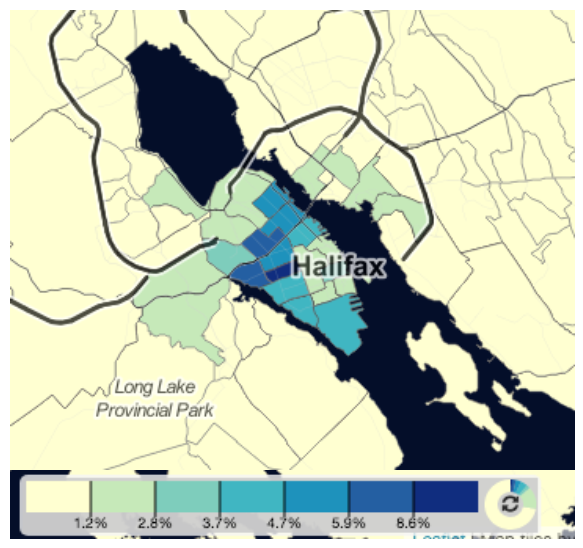 Drilling down to the regional centre, you can see significantly higher bike-to-work populations, with the highest being the census tract bordered by Quinpool, Robie, Jubilee and Connaught, at 9% mode share. As for the average across the regional centre, I’ll go with 3%, which is the number reported in this active transportation report from the Nova Scotia Health Authority, based on census statistics (so excluding kids, students, unemployed people, and multi-modal travellers.)

Who’s this network for, anyway?

So, say we’ve decided on 3% biking mode share for Halifax. If we spend $25 million building a minimum bike network in central Halifax and Dartmouth, are we spending that money on just 3% of the centre population? If things go as planned, not for long.

The goal of growing Active Transportation (AT — biking, walking, etc.) infrastructure is generally to change our mode share distribution, so a minimum protected bike grid is actually aimed more at luring people away from car trips than it is about rewarding those who’ve already chosen a different mode.

Halifax’s Regional Plan sets a goal to change our mode share distribution to grow the sustainable modes — walking, cycling, and taking transit — to 30% of trips by 2031. It sits now at about 22%, according to DalTRAC’s 2018 survey.

The goal is modest. If we updated it to reflect the projected costs of continuing to grow a city dominated by car trips— both in terms of climate change (remember that emergency?) and the sheer cost of building roads to accommodate all that vehicle traffic — we would be aiming closer to 40% by 2031.

But no matter how modest or ambitious the goal, we need to work towards it. Which is why this proposed minimum AT network (it includes multi-use trails as well as protected bike lanes) is aimed squarely at the people who are not already riding their bikes.

It turns out the relevant number is not 1% or 3%, but rather something more like 58%, which is the proportion of Haligonians that researchers found were “interested but concerned” in using bikes to get around Halifax. The same study, Impacts of Bicycle Infrastructure in Mid-sized Canadian Cities, found that 80% of people who had not ridden a bike in the past year would be “more likely to cycle in the future if more cycling infrastructure (e.g. separated bike lanes) is built.”

And some of the major factors in people’s decisions whether or not try riding? Separated and connected bike routes both weighted heavily. 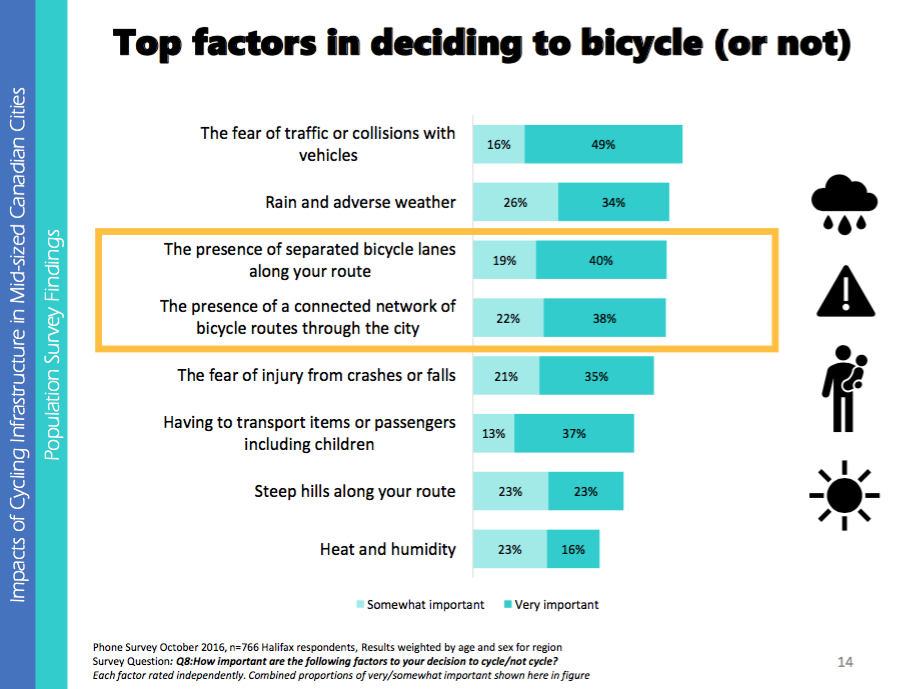 It’s hard to predict what sort of mode share changes a minimum, protected bike network could bring to Halifax. It could take some time before those “interested but concerned” folks actually make a change in how they get around, and inevitably, the network that gets built won’t suit everyone. But we do know the streets we have now work for only a small fraction of people on bikes. And if the goal is to change that, then we know we have to change those streets.