You are here: Home / City Hall / Vision Nothing Much: Halifax’s new road safety plan ignores the experts and embraces more of the same

There are on average 1,400 personal injuries and 14 fatalities per year due to vehicle collisions in HRM, according to the new Strategic Road Safety Plan (SRSP), recently approved by city council’s transportation committee and now on its way to full council for debate and approval.

If all goes according to the new SRSP, by 2023 only 11 people will get killed and 1,120 injured. At least that’s the five-year goal of the plan approved by council’s transportation committee last week, a 20 per cent reduction. (The original goal as presented by senior transportation staff was 15 per cent, allowing for one more death and 70 more injuries on average per year, by 2023.)

By all appearances, the 20 per cent goal is just an arbitrary number, picked out of the sky, and the discussion around the committee table last week reinforced that impression. With the number starting at only 15 per cent, Councillor Shawn Cleary proposed upping it to 20 per cent, pointing out that the Swedes managed a 42 per cent reduction in fatalities in 10 years, so maybe we could do 20 per cent in five.

The problem with a goal like this is it runs squarely into a moral conundrum, ever so neatly laid out in this video by the folks at the Transport Accident Commission of the Australian state of Victoria, who interviewed people on the streets of Melbourne about road fatalities. The interviewers asked people for a reasonable goal to set for the number of fatalities in their state, and answers ranged from 50 to 150 deaths per year. The same people were then asked to set the fatality goal for their family. You can guess the result, or watch it for yourself here:

Even considering the inherent problems of any numerical goal short of 100 per cent, that’s not actually my biggest concern about Halifax’s nearly-approved SRSP. Twenty per cent is just a short term goal, after all. And while it features too prominently in this plan, we probably shouldn’t get obsessed with what is essentially an arbitrary number based on some sense of achievability.

What deserves more scrutiny is the vision of the plan, and the basic principles behind what it promises to actual deliver on our streets.

The vision for Halifax’s SRSP is: “Moving Towards Zero Fatalities and Injuries for People Using Any Mode of Transportation.” It sounds appropriately aspirational, but what you need to notice is that the writers have specifically chosen “Towards Zero” instead of naming it “Vision Zero,” the Swedish safety program that revolutionized road safety in that country, and made the Swedes experts in safe street building.

This in itself is not a problem, a-rose-by-any-other-name and all that. But a reading of the plan reveals that HRM’s Towards Zero is not Vision Zero by another name, but rather a more cautious, less transformational approach altogether. It’s a vision where we can commit to moving towards zero deaths and injuries (eventually), and then agree to just do more of what we are currently doing. Even though the stated principle of the plan is “Do different, do more,” it’s clear that the thrust is simply, “do more.” (And even then, with no budget asks or estimates, even the “do more” is questionable.)

But let’s back up a moment and take a closer look at Vision Zero, just so we understand what it is we are leaving on the table. 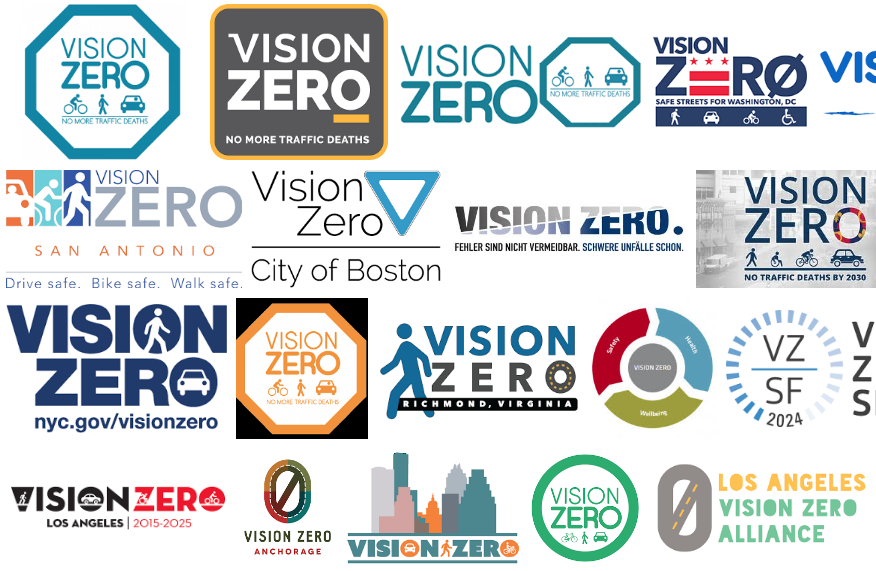 Just a partial collection of Vision Zero’s representation on Google Images. Vision Zero is being adopted by a growing number of North American cities and towns, but not Halifax.

In 2014, Citylab’s Sarah Goodyear interviewed Swedish traffic safety analyst Matts-Åke Belin, and the interview is still one of the best places on the internet to really get a sense of what Vision Zero is all about. (Though Trafikverket, the Swedish Transport Administration where Belin works, has created a Vision Zero Academy on their website, to help spread the good word.)

The TLDR of the Goodyear-Belin interview is encapsulated in this Belin quote:

Let’s create a system for the humans instead of trying to adjust the humans to the system.

The Swedes’ big innovation in traffic safety is to accept human error as a given, and still design a system that won’t kill or maim people. This is why they were bold enough to name their ultimate goal of zero right in the program name: Vision Zero.

Under Vision Zero, if a mistake ends up killing or seriously injuring someone, then that death or injury is a public systems failure, and a problem to be addressed. And it is generally addressed in how the street is designed.

Deaths or injuries are catastrophic for all involved, says Belin, and so Vision Zero asks the question: “What could we do from an evidence-based perspective to make sure that this kind of mistake could not end up in this catastrophe?”

When Goodyear asked Belin about some of the most successful measures the Swedes had implemented, his answer was rooted in basic physics.

“The reason that people get serious injuries is mainly because people have a certain threshold where we can tolerate external violence, kinetic energy,” explained Belin. “And we know quite well now how much violence we can tolerate.”

From a 2016 presentation by Matts-Åke Belin in Toronto.

And so the biggest control we have over deaths and injuries is vehicle speed.

“If you have places in your system where you have unprotected road users and protected road users, according to Vision Zero you can’t allow a higher speed than 30 kilometers per hour,” Belin told Goodyear. Under Vision Zero, the upper speed limit is not set according to how people feel comfortable driving (the way our limits are set now) but rather according to the physical realities of what happens when cars hit cars or cars hit people. It’s not unlike a health or environmental regulation setting an upper limit on the amounts to be tolerated of some toxic substance or other, Belin explains. It’s based on simple, hard science.

Meanwhile, over in Halifax, our brand new SRSP fails to set the key goal of designing our streets for slower speeds. Instead, it doubles down on what’s known as the three E’s: engineering, enforcement, and education. And sadly, its questionable analysis deems education as having the highest impact potential, citing “the greatest opportunity for widespread and permanent change.” Engineering, on the other hand, (our only hope for actually reducing vehicle speeds) clocks in with the lowest impact, since the effects of actual changes to streets are “quite localized.” 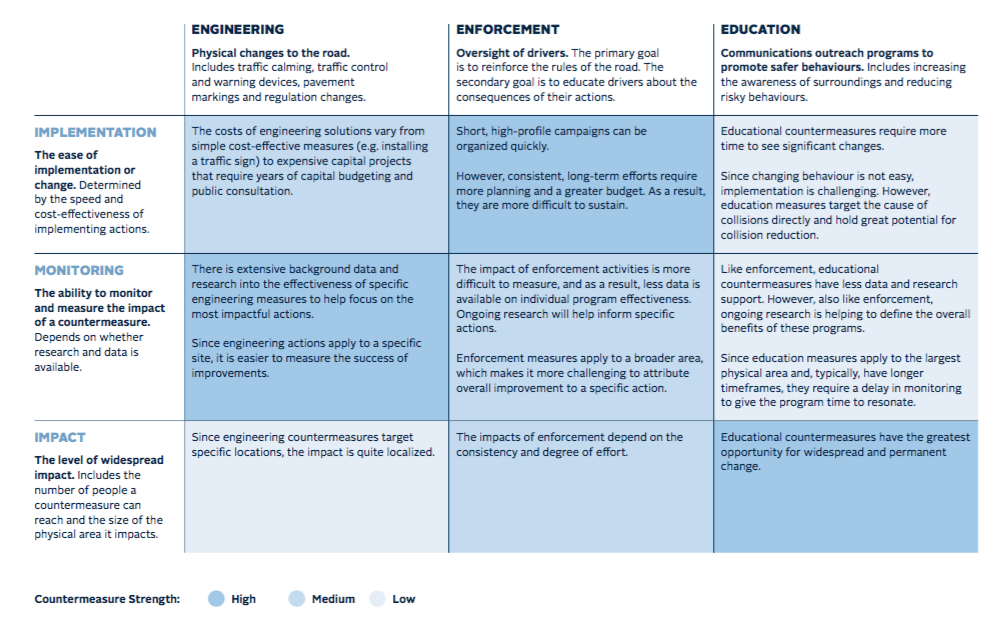 Where is the simple, clear, overarching goal of reducing vehicle speeds wherever cars and people mix? It’s not there.

We know that Halifax council has written to the province to ask that default limits in residential areas be dropped to 40 km/hr. So where is our matching commitment to actually build our roads to match this new lower limit? (We do know that limits alone don’t work, after all. They require accompanying design changes.) This Strategic Road Safety Plan is the ideal place for such a commitment, but it’s not there.

You will find measures listed throughout the plan that will have some speed reduction effect, along with some that are, preposterously, aimed at improving traffic flow. But there’s no overarching vision on speed reduction, the key component of what turns accidents into catastrophes.

Although the plan pays lip service to Vision Zero, it’s almost as if our senior staff either don’t understand the paradigm shift that Vision Zero actually requires, or simply don’t have the fortitude to require it.

Luckily, Councillor Waye Mason saw fit to ask for that overarching vision, right after approving the plan that should have already included it. Last week, Mason gave notice that at the next monthly transportation committee meeting he will be asking for a report on whether HRM can just start building streets to a lower (40 km/hr, in Mason’s case) speed standard.

This is progress. Even if you think Mason should be asking for a report on 30 km/hr standards (based on simple physics), you can still acknowledge that a 40 km/hr across the board design standard would be progress.

But when I look at the timeline for the current SRSP (it originated from a council meeting back in January 2016, over two years ago) and I think forward to the timeline where Mason’s modest 40 km/hr standard might one day become HRM policy, I just think: that is too damn long.

There was an opportunity here for people like director of transportation and public works Bruce Zvaniga and manager of traffic management Taso Koutrolakis to steal from the best in the world and transform the city’s attitude and expectations of road safety. Instead, they stole the word “zero” and left the rest of the Swedish approach on the table. They’ve spent two years essentially summing up Halifax’s current strategy and calling it new. And now we are debating whether we aim to save three lives or four. It’s profoundly disappointing.