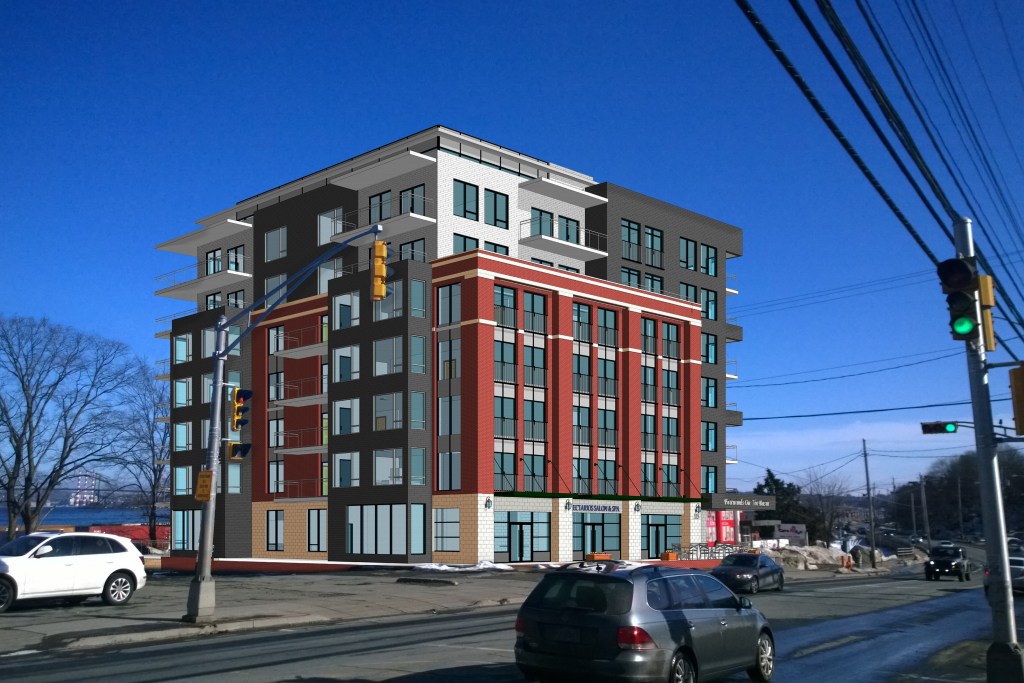 The city planner called it “unique,” the developer “unprecedented,” and the councillor for the area said he hoped it would be the first of many.

A third of the units in an eight-storey Bedford Highway apartment building, approved Tuesday evening at a virtual meeting of the Halifax and West Community Council, will rent for 30% less than market value.

It’s the first private sector-built, below-market housing to be built off the Halifax peninsula and uses a new kind of agreement to make it happen. 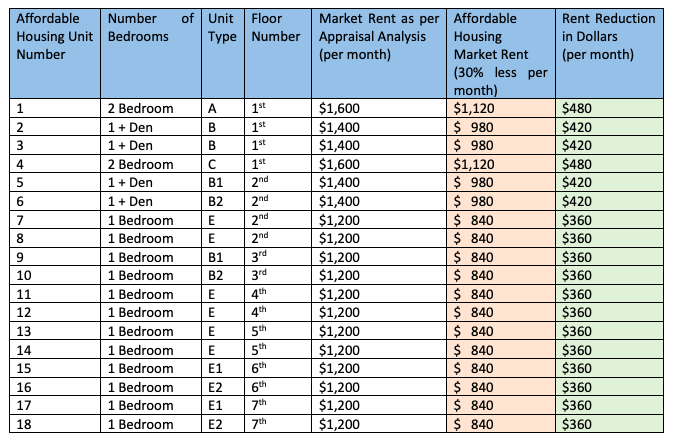 A breakdown of the unit rents from the 2018 submission. — HRM/KWR Approvals

Potential tenants in the building, located at Flamingo Drive on the Bedford Highway, will have to qualify as having low or moderate incomes to rent those units. Habitat For Humanity will monitor the developer’s adherence to the discounted rents for the life of a 15-year agreement.

Additionally, 20% of the units, 11 of the total 55, will be barrier-free, meaning accessible. It’s unclear whether any of the below-market units would also be accessible.

It’s a novel approach for Halifax councillors, who have repeatedly claimed not to be able to do this very thing. That is, they directed staff to draw up an agreement requiring affordable housing in a project where the developer was looking for land-use bylaw amendments, and without the involvement of the provincial government, the developer is going to rent the housing for below market value.

The municipality is doing so using a set of three agreements. The first is a development agreement, used all over the municipality to govern proposals that don’t fit the rules. The second is a density bonusing agreement — common in downtown Halifax and now in the Centre Plan area — to trade extra height for a public benefit. In this case, the benefit is affordable housing.

But the third agreement, a housing agreement, is different. It breaks from the Centre Plan practice of having developers pay cash into an affordable housing fund, and city planner Sean Gillis told the community council on Tuesday that the housing agreement between the developer and Habitat For Humanity is “unique.”

“This is to my knowledge the first one of its type that we’ve done,” Gillis said.

“It assures that those affordable units are rented at the agreed price to people of moderate or low incomes, and the affordable housing agreement in essence sets out how those units will be administered because HRM doesn’t really have the bureaucracy, if you will, set up to do that.”

“The percentage of affordable and barrier-free residential housing units as a component to the mixed-use, multi-family apartment building is unprecedented for a private-sector development in HRM,” reads a December 2018 submission from the developer. 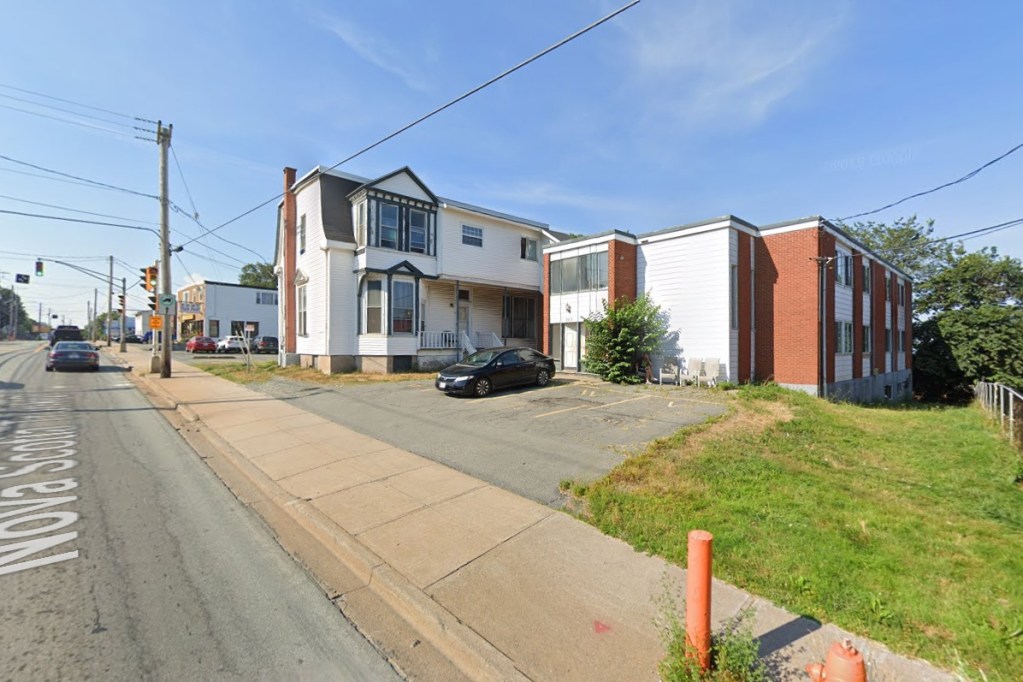 Stappas owns the existing two-storey, 13-unit building at 205 Bedford Hwy., across from Flamingo Drive, and will tear it down to make way for the new one.

Along with the 55 apartments, there’ll be about 2,000 square feet of commercial space on the ground floor — planned to be a hair salon and spa. 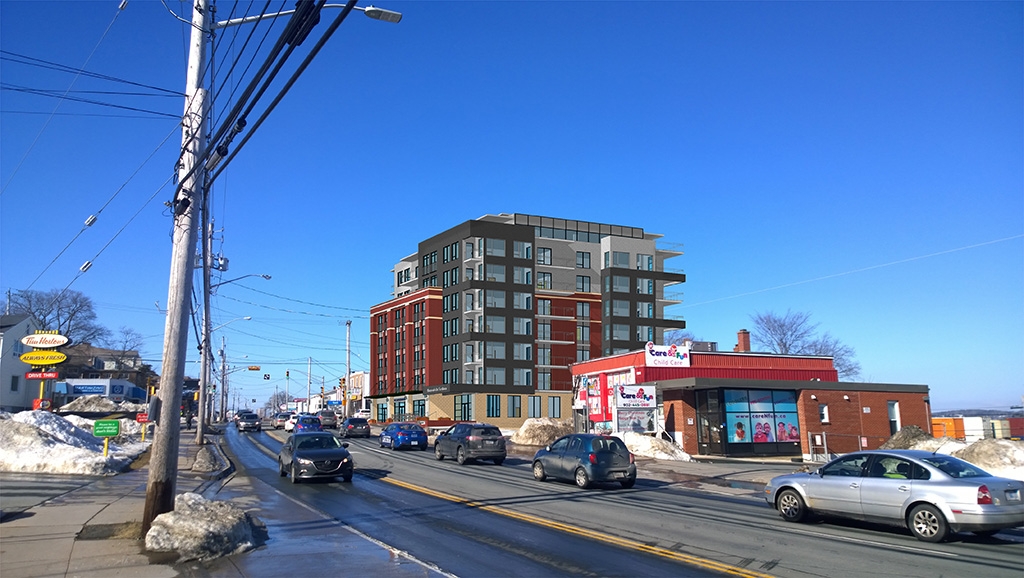 Halifax regional council approved bylaw amendments to enable the project in January, following the community council’s lead in rejecting an opinion from planning staff, who had recommended against the proposal due to its proximity to the CN rail yard and traffic issues on the Bedford Highway.

Despite the earlier recommendation, staff were in favour of the motion Tuesday evening, writing in a staff report to the community council that it’s reasonably consistent with the municipal planning strategy for the area.

In his comments following the staff presentation, Stappas thanked outgoing Coun. Russell Walker for joining him on the affordable housing “journey” from the beginning.

“I look forward to moving towards permits and getting our project developed with your support and help,” he said to staff and the community council.

No one showed up to speak for or against the project during the public hearing portion of Tuesday’s meeting.

During debate, Walker said it’s been a long road.

“Happy to see the moon and the stars all in alignment, and we’re here today and moving the first affordable housing off the peninsula and hopefully there’ll be many more to come,” he said.

Coun. Richard Zurawski expressed his concern for the building’s proximity to the Bedford Basin, given the acceleration of climate change and ocean level rise.

“In my assessment, it is at risk over the next 30 to 40 years to storms,” Zurawski said.

But the below-market housing was enough to sway Zurawski’s vote and the motion passed unanimously.

Amendments approved to allow Joseph Howe project to move ahead

Community council also approved a request Tuesday to enable an eight-storey development on Joseph Howe Drive, across from the Superstore. 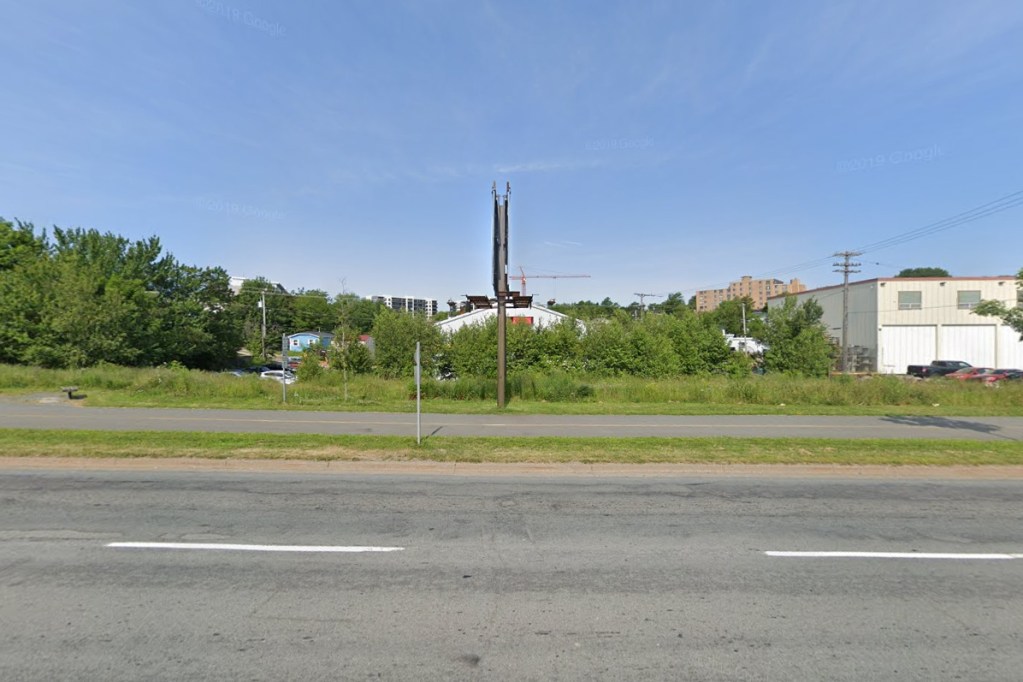 The area of Joseph Howe Drive where Maskine is proposing an eight-storey building. — Google Streetview

Developer Tony Maskine, known for the hotel project on Prince Albert Road in Dartmouth, wants to build the residential and commercial project on three pieces of property between Joseph Howe Drive and Percy Street. It would be eight storeys on the Joseph Howe side and three or four on the Percy side.

Maskine previously had a development permit for an eight-storey building on the site, but couldn’t make a design work, according to the staff report to the community council. 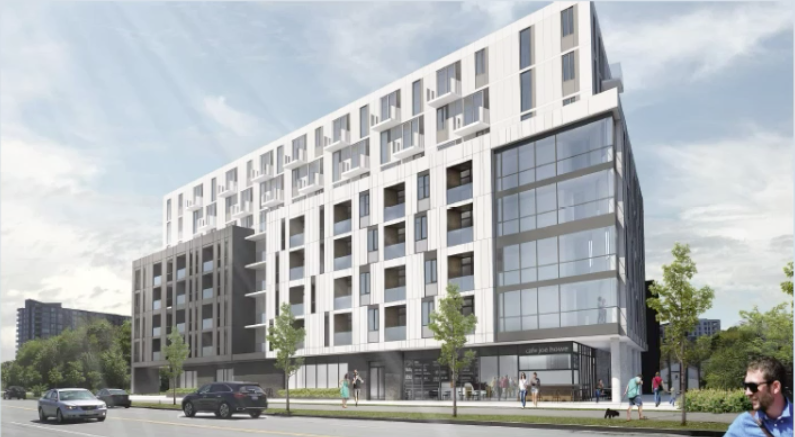 That’s because of the way the land-use bylaw for the area measures height. Maskine applied, via Fathom Studio, for what Fathom president Rob LeBlanc called “housekeeping amendments” to make the project more viable.

Though it fronts on Joseph Howe Drive, the property doesn’t technically have any street frontage on that side and the amendments would also allow it to cut two driveways through the Chain of Lakes trail running along that street.

Zurawski expressed concern that the trail would be temporarily closed or detoured for the project.

The motion passed unanimously. The developer will now have to apply for a development agreement, which will be subject to another public hearing.

The proposed site is a few metres from a 12-storey project approved last month.

Update: This story and its headline have been updated to reflect that the building is on the Bedford Highway, not in Bedford.