At long last, and in the shadow of a proposed capital budget which significantly underfunds HRM’s active transportation transformation, here’s part two of your update on some of the many bikeways projects underway right now in the city. You can find part one here.

You may have noticed a lovely new brick path between the Central Library and Dalhousie’s architecture building, leading to a bi-directional bike path through Dalhousie’s parking lot all the way to Morris Street. It’s a useful bisecting of the massive institutional block between Barrington and Queen Streets, helping make the downtown active transportation grid finer than the vehicle grid. Dal made these changes in consultation with the city, but it may be quite a while before the city steps up to match their efforts across the street.

Any improvements on Brunswick Street (at Spring Garden Road and beyond) will be “part of a larger Complete Streets planning and implementation process,” says David MacIsaac, HRM’s manager of active transportation. (Complete Streets are defined in the Integrated Mobility Plan as streets that are “planned, designed and maintained to make travel safe, convenient and comfortable for people of all ages and abilities and using all transportation modes.”)

There are two practical concerns on Brunswick Street, says MacIsaac. One is the continuation and improvement of the Brunswick Street bike lane to meet up with Spring Garden Road. The other is the abysmal state of the sidewalk along the Royal Artillery Park side of Brunswick Street between Sackville and Doyle Streets. “It’s also a street our urban designers would like to look at from a design perspective,” says MacIsaac, in order to give it “signature street” feel. 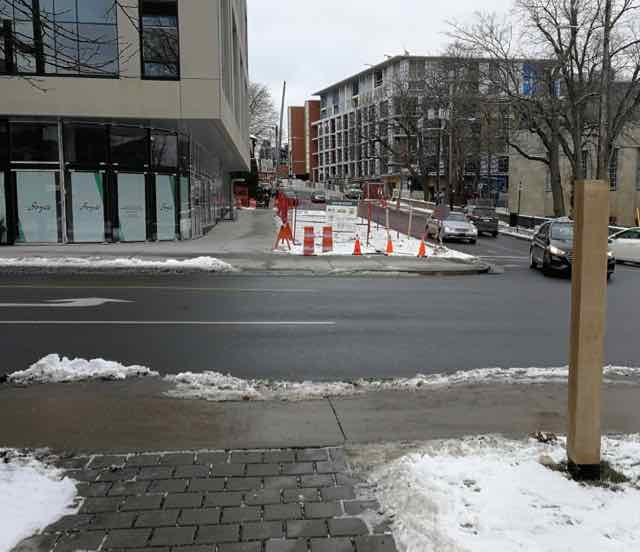 Looking northward from the new path between the Central Library and Dalhousie, on Spring Garden Road.

There’s room along the Doyle for an easy install of a protected, bi-directional bike lane, which will match up with what Dal has built across the street. But it will remain filled with sod or some such until the larger Brunswick Street plan has been created by staff and approved by council. There’s still no projected date for completion of said functional plan, but the project does fall under the IMP’s AAA Regional Centre Bike Network which is meant to be completed by 2022. Since this one isn’t very far ahead in the design queue, it’s hard to imagine that council will approve a design and pony up the resources to build it by 2022, but hey, who am I to rain on your hopeful infrastructure parade?

One of the biggest design nuts to crack seems to be getting across Spring Garden Road. Perhaps just marking the other crosswalk would do, especially if bikes are permitted to ride through crosswalks by then. “Or maybe,” says MacIsaac, “you need signals. That’s part of what we need to figure out before we go back to council for approval. It just requires some analysis.”

As for Spring Garden Road, the city will be releasing three options for functional plans to the masses on January 7. Functional plans are the bare bones of a street plan, and this one will be focussing on “major components of the street like relative widths of the road and sidewalk, transit priority, and space to enhance pedestrian & retail experience,” according to the city’s open house announcement.

“No one’s really ever thought a whole lot about what Forest Hills Parkway should be besides a car street,” says MacIsaac. But the major street is listed as a priority greenway in the IMP and is in the queue for pavement rehabilitation, so bike and pedestrian improvements could happen starting next year.

The project would eventually see the entire length of the Forest Hills Parkway and part of Cumberland Drive get a multi-use path on either the east or west side, with some smaller sections getting a matching sidewalk on the opposite side. Considering the parkway is home to a sports complex, a high school, the Cole Harbour Commons and a bunch of retail, it’s a pretty important connection. A safe and pleasant AT route could end up diverting a good portion of local car trips.

The project, with options for on-street bike lanes or a separate shared path, went to public consultation in March 2017. Now a year and a half later it’s in detailed design and, pending budget decisions, “we would hope to build the first phase of it next year,” says MacIsaac.

People have been talking about fixing the bikeway access to the Macdonald Bridge ever since the bikeway opened in 1999.

Nearly 20 years later, “we are close,” says MacIsaac. “We’re in a procurement process to hire detailed design for the entire project.” Although this project seems like it’s in the bag, with a council-approved functional design, $300,000 in this year’s capital budget, and $1 million included in the proposed capital budget for 2019/20, it’s anybody’s guess if it will actually happen as planned. In addition to taking several years (and budget approvals) to complete, it’s also the flashiest AT project the city has ever taken on, with a grand total $7 million price tag.

MacIsaac points out that although the project gets identified as being about the flyover (a cool-looking ramp/bridge that extends the bikeway out over the multiple vehicle traffic lanes exiting the bridge on the Halifax side), it also includes 3.5 kilometres of bikeway, and upgrades to Wyse Road and the Gottingen-North intersection. The flyover structure itself is “a little bit over half the cost,” of the total project, says MacIsaac. 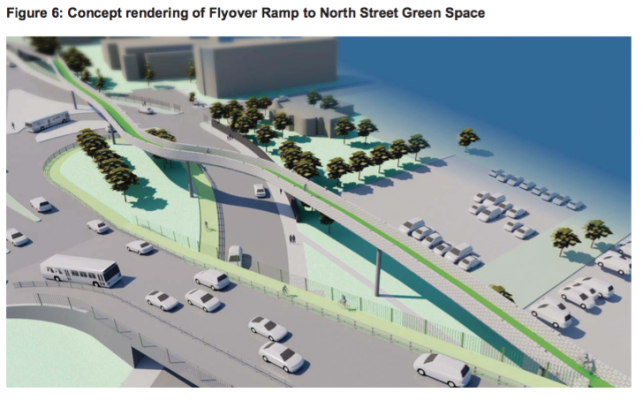 Another element that drives up the total project cost is outsourcing. Unlike internally managed and designed projects (like the South Park Street protected bike lanes) the price tag for the bridge access project costs include contracts for both project management and detailed design.

And then there’s the fact that the project will scratch more than just the itch for better bike infrastructure. The intersection of Gottingen and North Streets is in for a substantial sustainable modes makeover. “There will definitely be improvements for bikes but we’re also really looking to improve transit operations. And we’re going to ask our detailed designers to look at the pedestrian environment, to look at the pedestrian connections through there and optimize those.”

But will it happen? “It has its own line item in our capital budget, and it’s about seven plus million dollars spread over a number of years,” says MacIsaac. But so far the capital budget proposed by the city’s senior management includes $1 million for the project in 19/20, and nothing for the following two years.

The $1 million “will cover our detailed design and should cover some of the smaller infrastructure projects on the Dartmouth side,” says MacIsaac. “We have decided to go with the direction that we have from council to design the project and have it ready for construction if funding becomes available, even if it is in years past 2022,” he says.

The city is currently undertaking a functional plan for the entire Bedford Highway corridor. In the past, a road functional plan has meant an engineer’s outline of how to maximize vehicle traffic flow on a given roadway. But in these post-IMP times, the city’s blurb for the Bedford Highway Functional Plan promises to include land use planning considerations along the corridor, as well as expanding the typical focus on private vehicle traffic to include all the ways people get around.

If there’s any truth to that, you can bet the design drawings will not feature increased capacity for the 20,000 vehicles a day (on average) that use the Bedford Highway. Instead, they will be focussed on growing the numbers of people taking the bus (which in 2017-18 averaged 12,777 riders each day) and the numbers of people walking, rolling, or cycling along the corridor. Unfortunately, we don’t have numbers on how many trips people currently make by active transportation along the Bedford Highway. Let’s hope that the city will be counting walkers and cyclists as thoroughly as it counts cars as part of this functional planning process.

I know there are active transportation users on the Bedford Highway, as I hear about them online, and occasionally see them from a bus or car window. I myself tried to bike the highway once, and the experience was so harrowing that I have yet to attempt it again.

The situation for AT users on this historic road along the Bedford Basin is dismal: less than three-quarters of the road has at least one sidewalk, and less than half has painted bike lanes with zero separation from vehicle traffic. And true to the pattern in HRM, the painted bike lanes simply disappear at major intersections or for long narrow stretches, where they are most difficult to implement, but also most needed.

The city hosted two open house sessions and an online survey at the end of November to gather initial input for the future functional plan. The summary of that feedback should be forthcoming in early 2019.

Local Street Bikeways on Vernon and Allan-Oak: under construction and in court 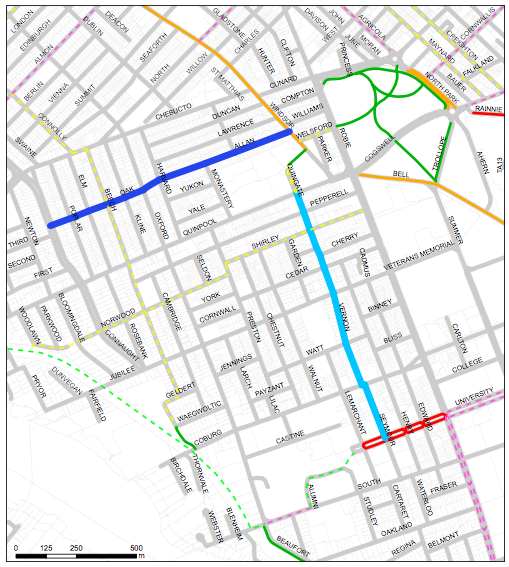 This map shows the proposed bikeways; the Allan-Oak corridor is in dark blue.

Vernon Street was recently rebuilt with bump outs to discourage speeding vehicles and make things more comfortable for pedestrians and cyclists, as part of a project eventually extending across Coburg Road to Seymour Street.  Similar bump outs may happen in the spring on Allan Street, from Windsor to Harvard Streets, but will stop there until a legal challenge by area residents has been resolved.  About 20 people from Harvard and Lawrence Streets have brought the legal challenge in opposition to a proposed diagonal diverter at Harvard and Allan which would block through traffic along the Allan Street. Diagonal diverters are common traffic calming tools in other cities, though the concept is new to Halifax streets.  The idea is that while blocking through vehicle traffic, you create safe and easy passage for cyclists and pedestrians.

There’s plenty more afoot: possible improvements to the Windsor-Cunard intersection, a peninsula connection to the COLTA trail at Joseph Howe, fights over on-street parking in the city’s residential near-north end where local street bikeways have been proposed, and maybe, someday, a possible active transportation connection to one of the city’s most important historical sites, Africville Park.  I’ll do my best to keep on top of it all in 2019!