I first wrote about bikes in Halifax back in 2003 when the city’s first bike plan, the “Blueprint for a Bicycle Friendly HRM,” was released and approved. Fifteen years and a half-dozen plans later, there is something that looks like momentum in the building of bike infrastructure in the city.

There has been a slow accumulation of piecemeal projects over the years, but the biggest and most recent cause of this momentum is the Integrated Mobility Plan (IMP), approved by city council in December 2017. The IMP calls for a basic network of triple-A (all ages and abilities) bike lanes throughout the regional centre by 2022. It’s ambitious in two ways: One, it calls for protected or off-street facilities on busy streets, where in the past the city has simply painted lines. Two, it calls for a connected network to be in place within a few years, where in the past the city has relied on piggy-backing on other road-work projects to get bike infrastructure in place. 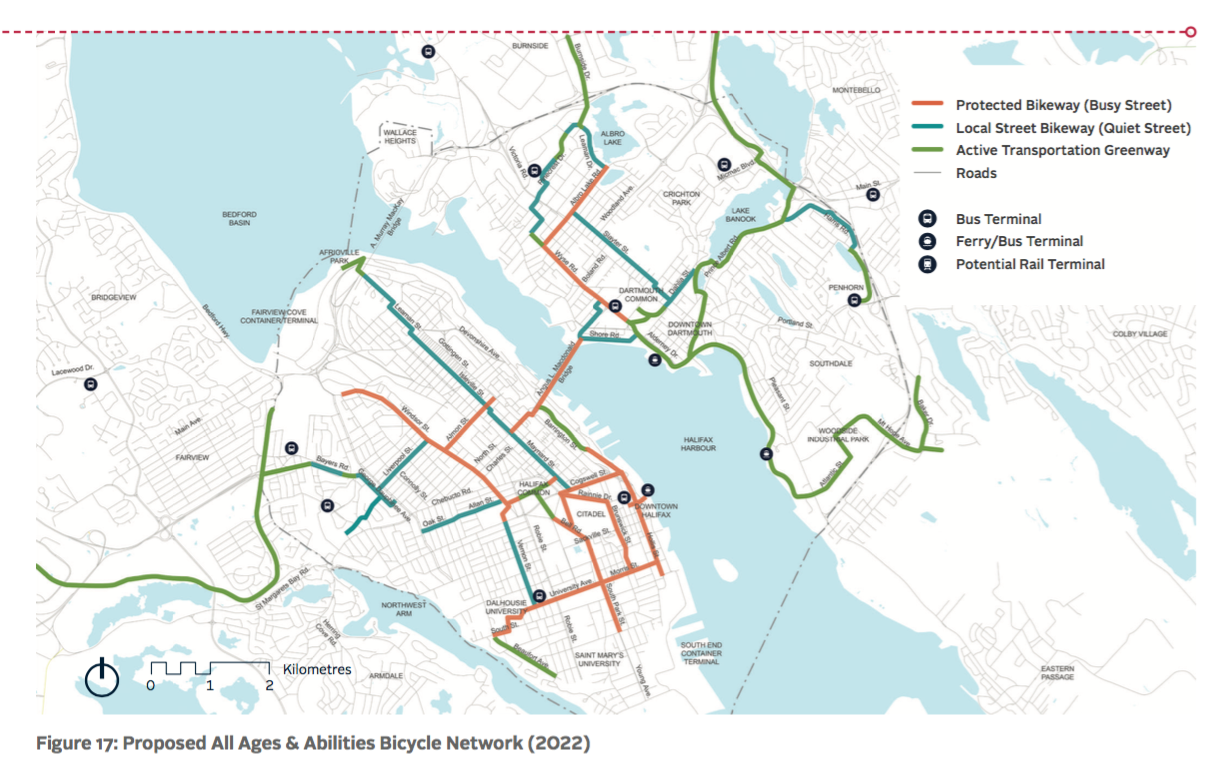 Here’s an update on some of the many projects underway, listed as either under construction, in detailed design (final stage before construction), in functional design (initial plans, usually with multiple options).

“The verdict is still out on whether we’re going to be able to build that this fall,” says David MacIsaac, HRM’s manager of active transportation. “If it doesn’t get built by November or December this year it will be built very early in the construction season next year.”

HRM staff are still working on the detailed design for the project, so it has yet to even go to tender for actual construction. That means next spring is likely the earliest it will get built, since “we are running out of construction days right now,” says MacIsaac.

In case you are thinking this might be Hollis 2.0, MacIsaac assures, “it’s not like Hollis at all.” (The beleaguered Hollis Street bike lane was first approved in 2010 and then remained about to be built for five years before it was finally installed in 2015.) MacIsaac says the delays for South Park have more to do with working out technical details of the design, involving things like drainage around bus stops, signage at bus stops (where people on bike will yield to transit riders), and snow clearing viability.

South Park will stand out from Hollis in another way: it will be a parking protected bike lane, so instead of parked cars blocking cyclists as they do daily on Hollis, parked cars will actually help provide protection on South Park. But this route is slightly more complex to design than the Rainnie Street protected lane, because it’s along a transit route, which means transit riders will likely cross a bike lane, with cyclists yielding, to get on a bus. Because this is the “first time that we’ve ever done a facility like this,” explains MacIsaac, “we’re just sort of ironing out some of those details.”

You may have noticed some construction at the base of Citadel Hill along Ahern Avenue, the one way street that runs behind Citadel High from Bell Road to the Cogswell roundabout. The sidewalk, which suffers from major problems with water and ice accumulation in winter, is torn up and being replaced with a new bi-directional multi-use path which will presumably be finished before the snow flies.

The path is a theoretical upgrade for both cyclists (no more weaving between traffic and parked cars) and pedestrians (no more navigating massive slush puddles), as long as they are able to share it nicely.

MacIsaac says the city will monitor how it works, and if there are too many conflicts then they will add a sidewalk to re-separate the two modes.

If it seems like this project is coming out of nowhere, it’s because there was little standing in its way. “It’s one of those magical situations where the municipality owned property between Citadel hill and the curb line so we had room to work,” says MacIsaac. 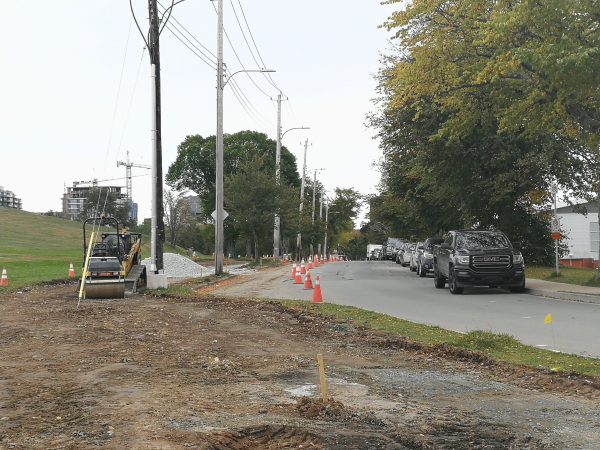 The new Ahern multi-use path is relatively short, but it will connect the Common and the North Park bike lane to one of the older striped bike lanes in town: Bell Road, which is also in the queue for a new design.

“We have to look at Bell Road and how to make it more Triple A,” says MacIsaac. Triple A refers to All Ages and Abilities, the gold standard for active transportation (AT) infrastructure and what the Integrated Mobility Plan (IMP) requires for Bell Road between South Park and Trollope.

“We need to upgrade what we’ve got on Bell and the two lead parts of that are improving intersections and considering how to make greater separation for the travel lanes.”

Functional design is the first stage of planning, and so city staffers are looking at various possibilities for getting people on bikes safely through intersections at Trollope and Ahern, and possibly also the trickiest intersection of all: South Park Street, Sackville Street, and Bell Road.

Even if South Park gets a protected lane in the spring, one of the key challenge points along the corridor, the intersection at Sackville Street and Bell Road, may remain as is.

“Whether we position the Sackville-South Park intersection as part of finishing South Park or as part of the Bell road improvement project is something that is still being discussed,” says MacIsaac.

Ultimately, the design of Bell Road needs to be in the bag in order to design the intersection that connects it to South Park. “With what we know now we can get it up to the south side of the intersection,” says MacIsaac, “but it’ll make it a lot more logical if we know what it’s connected to on the other side.”

Of course, there’s also the current major construction project at the corner, complete with a full lane encroachment, where Southwest Properties is building two new towers. While the southernmost tower on South Park could be ready for occupancy in spring 2019, the corner tower is slated for later in the year.

Hollis & Lower Water, aka the Downtown Bikeways – functional design due this fall

This past spring the city held meetings and surveyed residents about the options for improving the downtown bikeways, which are currently just painted lanes on parts of Hollis and Lower Water often jammed with parked cars and mostly unprotected.

The IMP calls for a triple-A connection through downtown, which means separated, protected lanes, which in turn means a major redesign, and probably some shifting or loss of parking along the corridors.

We could find out soon what exactly that may look like, according to MacIsaac. “We’re almost finished the functional plans and we’re going to take that to council this fall,” he says. “Our goal is to implement the improvements next year.”

Of course, before implementation can happen, a functional plan must be approved by council, and as well there needs to be a detailed design by city engineers or contractors, a budget approval by council, and a Request For Proposals issued by the city. It could happen by the end of the 2019 construction year, but I will not be surprised if it does not.

The IMP also calls for a connected network, which means the northern end of the downtown bikeways will need to connect to the planned off-street bikeway along Upper Water Street, currently approved as part of the Cogswell redevelopment plan. Both active transportation planners and Cogswell planners are “heading towards some final decisions,” says MacIsaac. ”We’re going to make sure that they kiss comfortably and that the transitions all make sense.”

Since May, a short section of Barrington from Niobe Gate Bridge to North Street has been reduced to three lanes, to give the naval base some room to replace a retaining wall. Last month, Halifax council approved of the idea of keeping the three-lane configuration to make room for an extension of the Barrington Greenway northward to connect with the Devonshire Avenue bike lane. The project is still in the functional design stage now, but expected to be ready for construction in 2019. The $700,000 project price tag includes the AT connection, but also transit priority elements through the intersection at North and Barrington Streets.

Almost as exciting as a permanent extension of the Barrington Greenway (and sidewalk widening across the street) is the fact that Halifax staff and council are again embracing the idea of a temporary facility, whether it be something to suffice until final design decisions are made, or something to test out possible designs.

But, says MacIsaac, despite the approval of council, there are practical concerns about when and whether an interim facility can happen this year. The lane is partially gravel and partially pavement, with utility poles in the pathway, making it not exactly ideal for cycling, and difficult for winter maintenance.

“It would be an interim facility that would not conform to our typical standards,” he says, adding that the goal is still to get it open as soon as possible after the construction project ends.

Next week we’ll continue with projects on Brunswick Street & Spring Garden Road, the Forest Hills Parkway, the Macdonald Bridge bikeway access, Windsor & Cunard Streets, Bayers Road, Vernon Street and the Allan/Oak Street bikeway. If there’s a project you want an update on, please list it in the comments.