You are here: Home / City Hall / Transportation committee pushes back on buttons at Halifax intersections

A pedestrian push button in the north end of Halifax. Photo: Zane Woodford

Pushing back against the municipality’s traffic authority, council’s Transportation Standing Committee wants to rid much of the city of pedestrian push buttons in the next year.

The committee met in person at Halifax City Hall on Thursday to discuss a list of information reports that were deferred from a council meeting earlier this month.

Among those was a report on pedestrian push buttons at signalized intersections that defended the use of the buttons.

Coun. Waye Mason asked for that report nearly two years ago. As the Halifax Examiner reported earlier this month:

The problem Mason is trying to solve is one familiar to anyone who walks around the urban areas of Halifax Regional Municipality: you get to an intersection just as the light is turning green, and even though you press the button, it’s too late to change the pedestrian signal. That means you have to wait for the full cycle of the light to legally cross the street, even though the light is green.

“And you know what? No one does that. They just walk. There’s a green light for the cars, there’s nobody coming, and they walk,” Mason said in an interview Tuesday. “And if they get hit by a car, they’re at fault because the green walk guy wasn’t up and that means they walked against the signal. And that’s dumb.”

Cleary argued the inconsistency of the buttons — having them perform different functions at every intersection — is creating confusion.

“It creates, in some people, a complete misunderstanding of how to walk,” he said.

Cleary questioned acting traffic authority Taso Koutroulakis about the value of the buttons:

Cleary: How does it make the pedestrian safer by having to push a button to get a walk signal?

Cleary: Or they have to wait twice as long because they didn’t push the button because that meant they don’t get the walk signal. So it only improves the operation for vehicles. It’s more efficient for vehicles. It’s less efficient for pedestrians. But it does make them less safe because if there isn’t a walk signal and a driver is looking and they look at the signal and they see the hand and then they see the pedestrian in a crosswalk, they may think bad things about that pedestrian versus if the pedestrian has the walk signal. So I think, fundamentally, having the beg buttons, doesn’t that make the pedestrian less safe?

Koutroulakis: It all depends on the situation because in other situations where we do not have push buttons, pedestrians still walk against the don’t walk. I’ve seen that myself on a regular basis. Pedestrians, and motorists for that matter, choose whether or not they violate the signal. It’s no different than in the middle of the night if it’s 2 o’clock — I know this is a poor example — but at 2 o’clock in the morning, if a vehicle is stopped at a red light and there’s nobody around, they’re probably going to run that light. It’s a human behaviour piece to all of this.

Later in the meeting, Mason brought forward a motion aimed at converting or replacing many of the buttons — in the regional centre and some suburbs — to only be used for audible signals for visually impaired people. He wants signage prominently displayed to explain the purpose of the buttons, and asked for a report within 120 days on how it could all be done by September 2021. 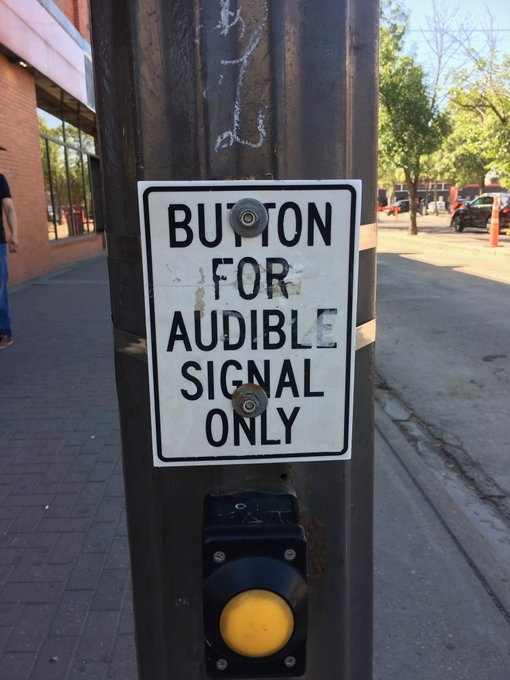 A push button in Edmonton used only for accessibility. Photo: Twitter/@WayeMason

Koutroulakis said it wouldn’t be easy.

“I’m going to have to take a deep dive into it to see whether we can get back to you in four months,” he said.

Transportation and public works director Brad Anguish took responsibility for the long wait for the report, but he’s not sure it can be done by 2021.

“That’s the part that makes us more nervous because basically you’re saying you want it all done by 2021. That’s the part, it’s very hard to sign onto,” he said.

“It’s very clear to us, that’s the goal. And we’ll come back with this report and talk about the reality of achieving that goal and what it would take.”

The committee also discussed a report on restricting right turns on red lights. That report recommended against banning them everywhere, like Montreal does.

And after a discussion around traffic-calming, Anguish agreed come to this year’s budget discussions with another list of school zones eligible for speed humps.

This year, the municipality planned to install speed humps on 10 streets around seven school zones.