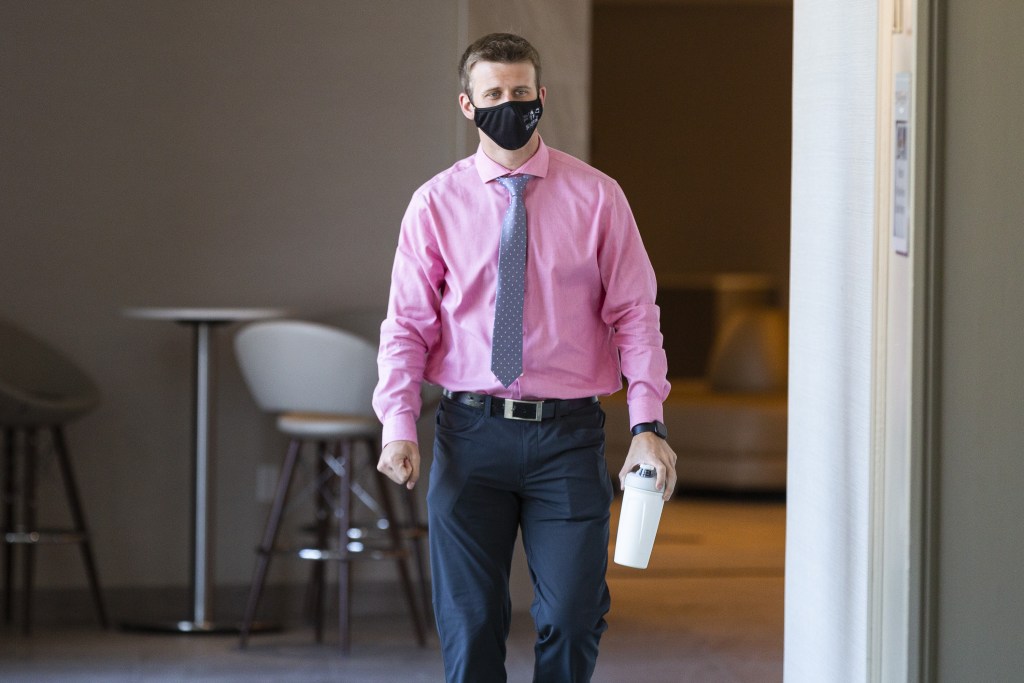 He watched an already-intoxicated Corey Rogers chug half a pint of whisky in two or three seconds, but Const. Ryan Morris didn’t believe that kind of drinking would “cause him any physical harm.”

Morris arrested Rogers outside the IWK in June 2016 on the night he died in police custody, along with constables Justin Murphy and Donna Lee Paris. All three officers have now taken the stand at a Police Review Board hearing being held this week and next in Dartmouth.

On Friday, Morris began his testimony. He was the first officer to arrive on the scene outside the hospital, where staff had called police because Rogers, 41, was threatening staff and security after they told him he was too drunk to go inside and see his newborn child.

When he pulled up and stopped his vehicle, Morris said he saw Rogers had a half-full pint of Fireball, a cinnamon-flavoured whisky, in his hand. As he got out of the vehicle, Morris said Rogers started to drink the alcohol, and by the time he got to the front of his cruiser, on his way to the passenger side of the vehicle where Rogers was standing, the bottle was empty.

Morris estimated Rogers drank the half-pint — more than six ounces at 33% alcohol by volume — in two or three seconds.

Later on that evening, after carrying Rogers into police headquarters and then dragging him into a cell, Morris remarked to Murphy and Paris, as well as the two booking officers, special constables Cheryl Gardner and Dan Fraser, that he was “impressed” how quickly Rogers got the drink down.

“Unfortunately I chose an unprofessional manner in which I relayed that information, but I told the booking officers he had consumed a half-pint of Fireball whisky in my presence,” Morris said on Friday.

Speaking with Rogers’ partner outside the IWK, Morris said he’d learned Rogers was an alcoholic. He didn’t know how much more alcohol he’d consumed, or what he’d eaten before drinking, but the amount of alcohol he watched Rogers consume wasn’t a concern for Morris.

“I didn’t believe it to be any type of a threat to his physical … or cause him any physical harm at the time,” Morris said.

After Murphy and Paris arrived on scene, the three officers took Rogers into custody and loaded him into Morris’ vehicle. On the way to police headquarters, Morris said Rogers banged his head against the Plexiglas barrier between the front and back seats five or six times.

Rogers also started threatening Morris, the officer testified, telling him he was going to kill him and his family, and he started spitting on the barrier and the floor of the cruiser.

When they got to the police station, Morris said Rogers continued to spit in the back of the cruiser.

“I asked Mr. Rogers if he was going to stop spitting, at which point he advised me, ‘No,'” Morris said.

As the other officers had already testified, Morris said Murphy went inside the booking area to get a spit hood and Paris placed it on Rogers’ head.

Morris had never placed a spit hood on a prisoner himself, and still hasn’t, he testified. He’s never received any training on the use of spit hoods. He said he’s never seen another officer remove a spit hood from a prisoner’s head. Asked whether he considered taking Rogers’ spit hood off, Morris said he didn’t.

“If we took the spit hood off, it would defeat the purpose of us putting it on. The spit hood was put on so we were not spit on. If we removed the spit hood, that would provide Mr. Rogers an opportunity to spit on us,” Morris said.

Morris said he didn’t think Rogers’ level of intoxication changed between the time he was outside the IWK, right after chugging the Fireball, and the time the officers dragged him into his cell.

Rogers was still “rousable,” and responding to questions, Morris said.

After the officers placed him in his cell, removed his handcuffs and locked the door, Murphy threw Rogers’ shoes in. Then Morris said he told Rogers to sober up so he could go see his child the next morning. He said Rogers replied, “Fuck you.”

About half an hour later, Rogers vomited into the spit hood and died.

The hearing is scheduled to continue on Monday, when lawyers for Halifax Regional Police and Jeannette Rogers, Rogers’ mother, will have an opportunity to cross-examine Morris.