You are here: Home / City Hall / There’s not a good financial case for a publicly funded stadium 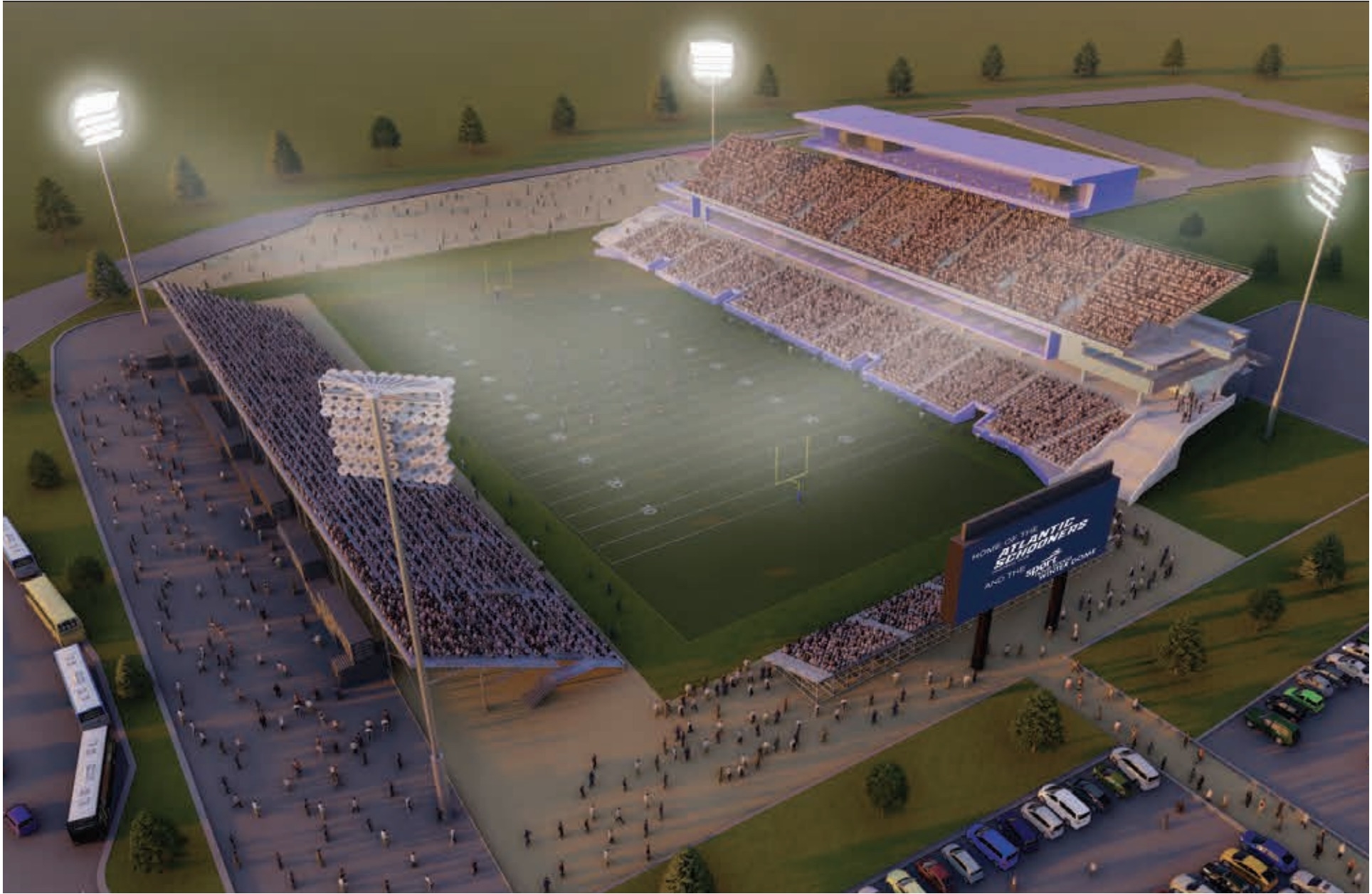 On Tuesday, Halifax Council will debate a staff report that recommends, among other things, contributing $20 million to Stadium Co (part of the Schooners Sports Entertainment – SSE – corporate structure) to help build a stadium for an as-of-yet announced CFL franchise on staff-hope-not-Shannon-Park lands.

I have read the HRM staff report on the financial impacts of various options and a rejection of the Shannon Park site for a myriad of reasons. Largely on the basis of precedent direction from council, the staff report is proposing a one-time contribution of $20 million from the Strategic Capital Reserve that proposes to limit additional risk within the terms of the deal.

Not included in the report, but very much included in SSE’s public pitches for the project, is an analysis of the benefits to the public that will come from municipal investment in a stadium and having a professional football team in Halifax.

I’ll ignore the case for or against sports tribalism as a way to put your city “on the map” because, quite honestly, I have never seen compelling research one way or another to determine if that’s true, especially for minor professional sports like the CFL. I can imagine the Yankees as a substantive marker for the New York brand, but in a Paris cafe if someone even knows where Winnipeg is, are they thinking Blue Bombers? I doubt it.

Instead, I wanted to research the history of governments investing in stadium deals, the economic impact models used for these kinds of projects, and what happens down the line to cities who get involved in stadium or arena investments.

The results should lead Haligonians and their councillors to conclude that there are fewer benefits and greater risks at play here than are included in the staff report and that they should reject the recommendation to invest in this project.

How does the public fare in stadium deals?

In 2016, the Brookings Institute studied 45 stadiums (and associated academic studies) that were newly constructed, majorly renovated, or were under construction across the United States since 2000. Thirty-six stadiums were at least partially funded with federal money — in the U.S., this often takes the form of tax-exempt municipal bonds making it cheaper for municipalities to borrow money to build stadiums. Some also used tax incremental financing, one of the funding mechanisms that SSE proposed.

The claim the Brookings Institute tested was whether spill-over economic benefits that come from stadiums and professional sports teams outweigh the public costs and therefore the public benefits overall. The study found:

Proponents of government subsidies for sports stadiums typically justify them on the grounds that stadiums provide spillover gains to the local economy. The evidence for these spillover gains is weak. Academic studies consistently find no discernible positive relationship between sports facility construction and local economic development, income growth, or job creation.”

Now, that study only looked at the benefits from a federal perspective. What about provincial (or state) or local economies — do they typically benefit from subsidizing a stadium?

In 1997, 17 economists (led by editors Roger Knoll and Andrew Zimbalist) collaborated to take a look at the claims that stadiums pay for themselves in increased tax revenues, local economic development, and job creation.

The resulting book is called Sports, Jobs and Taxes and should be required reading for anyone in government working on arts, culture, and sport and receiving private pitches for public investment in infrastructure. Their findings were universal across numerous case studies:

• Sports stadiums and teams are not a substantial source of local economic growth, and
• The magnitude of the net subsidy exceed the financial benefit of a new stadium.

There are a couple of reasons for why this is the case.

First, that spending on entertainment within an economic region may move from one sector of the economy to the other, but generally doesn’t grow in size due to a professional sports team. Halifax residents may choose to go to CFL games if the team arrives there, however they will largely just adjust other spending they already do within HRM bounds to pay for it, so the economic effect is minute.

Second, tourism impacts resulting from professional sports teams are generally a lot lower than they’re promoted to be. Think about it yourself — if you are a casual fan, are you likely to head to Regina, or Winnipeg, or Montreal specifically to see a regular CFL home game, or are you more likely to go to a game as a result of having already travelling there? If the CFL was the kind of tourism draw that its proponents claim it can be, why less than four months ago would two teams be up for sale (one of which the CFL itself bought because, at the time, nobody else would) and ratings and attendance be down?

Most sports fans are casual fans, and other than one Grey Cup every 10 years, largely people who attend home games will be people from Nova Scotia, putting Nova Scotian dollars back into their own economy by attending a game once in a while.

Finally, in 2017, the Initiative on Global Markets at the University of Chicago asked 42 economists (including that year’s winner of the Nobel Prize for Economic Sciences, Richard Thaler) whether they believe that providing public subsidies to build stadiums is likely to cost taxpayers more than the local economic benefits it will generate. Only one economist disagreed with that statement, arguing not that the dollars and cents made sense, but that all Chicagoans benefit from the Cubs winning the world series in an intangible, civic pride way.

Regardless of how you look at it, the evidence that net economic benefits are generated from public investments in stadiums isn’t there at national, provincial, or local levels for dozens of stadiums built in recent memory. You can theorize all these benefits, but one of the reason we study things is to determine whether or not they happen in practice. And in practice, they don’t net out well as far as public investments go.

The economic impacts of building stadiums

I have worked on a number of economic impact studies over the years. Economic impact models are conceptually pretty simple. Plug in any project (whether a stadium, a new hospital, or an elevator to the moon) and you’re going to find out that spending money generates good things for the economy overall.

In Canada, the vast majority you’ve seen used a Statistics Canada input-output model that links spending in one area of the economy with another through historical data. You can plug spending on concrete in, and based on the potential expansion to concrete businesses, you can estimate from history how much accountants or hair dressers might benefit from that increased economic activity.

Tim Bousquet thinks these are all bunk, and I tend to agree — not because the model itself is flawed, but because they’re now primarily used as a rah-rah promotional tool to induce government investment in a project.

The reason I don’t like economic impact studies for stadiums is they don’t factor in opportunity cost when used on public dollars. The studies simulate what will happen to the economy if you spend money vs. if you don’t. This works fine for private spending as the private sector can choose not to spend that money in your area, thus depriving you of that money. But given the state of governments and budgets, it’s reasonable to assume that the municipality, and later the province, will spend the tens of millions being asked for and/or committed on something (think of all the capital projects that are not going ahead each year) and therefore the simulation itself is not an accurate reflection of the choice Halifax Council has to make.

The question is not whether or not HRM can create economic benefit from using its Strategic Capital Reserve — unequivocally it can — it’s whether this project nets out better than alternative uses for it. The answer to that question is unknown here because HRM has apparently earmarked $20 million for a stadium in 2011 and seemingly hasn’t been considering alternatives and their potential benefits for that money since.

Yes, there is $30 million in proposed private investment being leveraged through the building of the community stadium (p.4 of the above linked staff report), however three levels of government ponying up $80 million and a loan guarantee to induce $30 million worth of private investment is not really a great deal for citizens.

One of the more troubling moves over the last few decades has been the power struggle that professional teams have been having with local governments in order to get better rent deals or capital infusions in new stadiums. The struggle goes something like this

• The team’s lease is up or stadium is two decades old;
• The team argues that it needs new financial terms in order to remain in the community;
• When governments balk, the owners start to negotiate with other communities and counties outside of their tax region to move the team there, and
• The region either caves and invests more money, or they don’t and the team moves.

Want a recent example? Consider that Calgary City Council gave $290.4 million towards a new stadium after the team threatened to “just leave,” at the same time they’re cutting city services and laying people off due to a budget shortfall.

Other very public examples include the Atlanta Braves moving from one county to another to get a new stadium, the Twin Cities getting threatened before agreeing to contribute $500 million towards a new football stadium, and teams like the Baltimore Colts and San Diego Chargers moving to different cities to get new stadiums when local councils said no.

For another relevant example, you can check out a January 8th, 2018 issue of Morning File where Tim Bousquet outlines SSE founding partner Anthony Leblanc’s history with the city of Glendale, Arizona and leveraging the prospect of leaving to get a new arena deal. That should worry Halifax residents greatly.

The reality is if you think having a professional CFL sports team is part of what makes your city “world class” — this despite the fact nobody in the world but Canada has rights to broadcast CFL games — and you pony up money to help build a stadium, you surely are going to do what it takes to stay “world class” and get a return on that investment.

This is what is known as the sunk cost fallacy — that past investments justify further expenditures.

So when the team shows up in 10 years requiring upgrades to its facilities to attract customers, or a renegotiation to its tax rate or rent payments to remain competitive, the prospect of the team either folding or being moved will be put on the table and Halifax Council will get to chose between an empty stadium and the loss of a “world class” asset and deepened financial support that staff are not recommending right now.

Perhaps the Schooners will use the Moncton stadium they’ll potentially use in 2021 as a way to get there.

David Fleming is an economist.