You are here: Home / City Hall / The year in (planning for) bikes

Maybe it’s just me, but Halifax seems to be on some sort of cusp for cycling.

The Halifax Cycling Coalition is spreading its wings with a new office and full-time staffer. The city may actually build (or help build) two stretches of infrastructure in an admittedly planning-focussed year. And last fall the city even beat Dalhousie to the punch by installing our first ever protected lane along Rainnie. (The second will go in this year, courtesy of Dal.)

“I’m cognizant of the fact that we’re not implementing a lot,” says David MacIsaac. “But when you go in and you are retrofitting a right-of-way, it requires a lot of planning and consideration. That’s really our focus this year.”

We can reasonably expect two stretches of bike lanes to actually get built/painted before the year’s out: a 1.1-kilometre stretch of Devonshire Avenue in the north end, and a 400-metre stretch of University Avenue at Dalhousie.

MacIsaac is understandably gun shy about outright committing to the projects getting built this year, especially after the years long post-approval delay of the Hollis Street lane. “Until I see a shovel and a tendered project, I would never say that for sure,” he says, on the chances that the council-approved Devonshire project will get built this year.

Of course, both of these projects are what you’d call piecemeal. The University Avenue bike lane is a pilot demonstration project for a separated lane spearheaded by Dalhousie and backed by provincial money. It will be a 400-metre-long island of comfort and safety for people on bikes, until the city can chip in with some connections, which it seems they are at least intending to do.

“We’re going to do a plan and preliminary design for the Morris Street-University Avenue corridor,” says MacIsaac. “It would attach to the University bike lane and help determine the permanent facility type that would be up at that end, which could include what’s going to be installed this summer.”

As for Devonshire, the connections for this important stretch of north end roadway are nil at the moment. The intention is to eventually have a local street bikeway on Isleville connected on the Novalea end. The Barrington end is a high-speed danger zone and will likely remain that way for the foreseeable future, or at least until the city can “establish the feasibility” of an extension of the Barrington Greenway Trail from North Street to Niobe Gate.

The reason for the continued patchwork approach to the bike network? Financial efficiency. Devonshire is happening this year because the street is up for resurfacing, and it’s relatively uncontroversial because it’s so wide. At 16.5 metres in width, there’s plenty of room to keep on-street parking, add two 1.8 metre bike lanes, and still have two wider-than-necessary car lanes at 3.4 metres each.

A cross-section of the new Devonshire, slated to be installed this summer.

Unfortunately, the city doesn’t see enough room for separated bike lanes, at least not without tearing down the concrete median and relocating the lampposts, for an additional $1 million. I’m not sure why we aren’t at least leaving space for a barrier, as there’s still room to spare in the car lanes. My gut, as someone who has ridden, walked, and driven that stretch, says that before too long there will be calls for some sort of separation. The vehicle speeds are just too fast for a 10 cm wide painted line to be sufficient.

When determining the need for protected bike lanes versus painted lines versus nothing at all, planners use a graph such as this one, from the City of Ottawa, used here to help determine the future of the South Park bike lane. 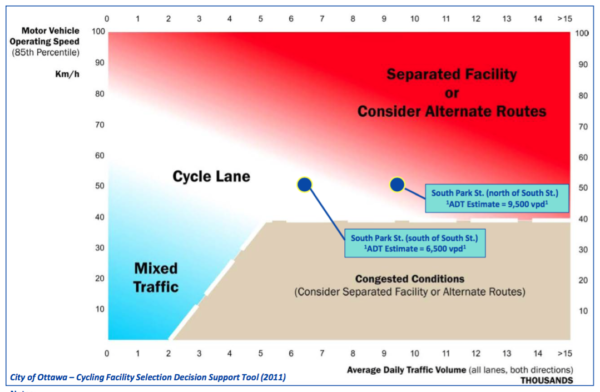 “The more vehicles there are and the faster they go,” explains MacIsaac, “the more you would look for protected bike lanes, or for separating bicyclists and motor vehicles as much as possible. The fewer vehicles and the slower they go, the less need for separation. And Devonshire fits really quite clearly in the category of requiring less separation primarily because there’s not many more than 3,000 using that street every day.”

Meanwhile, as we get ready to paint a lane in one area of the city, we’re looking to upgrade a painted lane in another.

South Park Street is coming up for repaving in the next few years, and so the city is looking at the possibility of installing protected lanes along the corridor, and doubling it in length, extending all the way down to Inglis Street.

At a public meeting last month packed with people holding bike helmets, there was a lone voice in the room expressing concern over the lane upgrades. Juanita Spencer of the Spring Garden Area Business Association was concerned over the proposed loss of 54 on-street parking spaces over the one-kilometre stretch.

But fear not, the perennial showdown between cycling advocates and businesses frightened of losing parking might not surface this time around, because the cycling advocates have a way to save the parking. Yes, that’s right. The Halifax Cycling Coalition has proposed two alternative scenarios, both of which would save most of the on-street parking between Sackville and South Street.

“If it’s unnecessary to remove parking and there’s other options, then why do it?” says HCC director Kelsey Lane. “When there’s a way to make it possible for everybody to ease into this protected bike lane scenario, then let’s not remove parking on a street where we don’t need to. South Park has the width to put in both, so let’s put in both for now. And then when there’s streets down the line where we do actually need to remove the parking we can fight that battle when we come to it.”

The HCC options will involve higher costs, which they estimate at between $500,000 and $1 million. One scenario involves removing some mature trees along South Park, and another involves building a fully separated cycle path beside the sidewalk, which would be a first for Halifax. 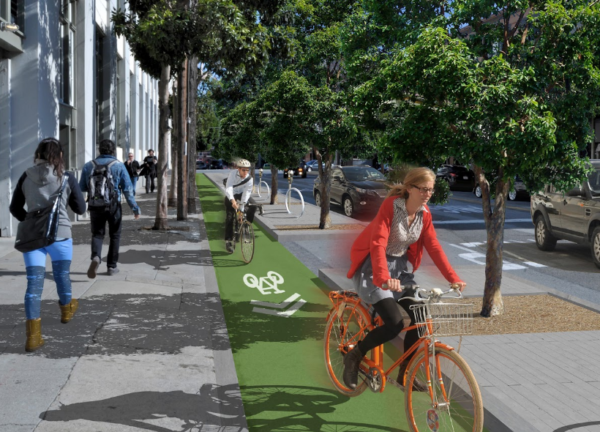 A cycletrack similar to one being proposed by the Halifax Cycling Coalition, which could save parking spaces along South Park.

Juanita Spencer seemed pleasantly surprised to see a parking-friendly solution coming from the bike community. “It was great to see that they are willing to work with the business community and we’re happy to work with them,” says Spencer. “I’ve taken those proposals back to the city, and am hoping we can find a way to work together.”

There are other bike projects on the horizon, though it’s hard to gauge how far away that horizon is.

The Macdonald Bridge bikeway approaches have been “narrowed down to a couple of options on the Halifax side and two to three options on the Dartmouth side,” says David MacIsaac. “That would go to the public for sure, probably in fall of this year.”

They city is also working on a plan to extend the new Rainnie lane down to Brunswick, and along to the Central Library, where Dalhousie is developing a cycle connection to Morris Street between their Medjuk Building and the library.

So plans are afoot, but actual implementation seems stuck in the somewhat limited timeline of the pavement-renewal process.

“The city just can’t wait until it’s time to repave a street to look at bike lanes,” says Kelsey Lane. “Then you get those fragmented pieces and it’s not really desirable… You really need to make sure you have those connections for people that get them from one end of the city to the other.”

One possible fix HCC is looking into is temporary infrastructure, like moveable concrete curbs with bollards that are being used to create interim protected lanes in Edmonton. “Put in something that’s temporary and cost effective,” says Lane, “and then when you repave it, put in something more permanent.”

“It’s not just one bike lane, it’s seeing that minimum grid, allowing people to use that safely and comfortably. If you just put in a painted lane, that’s okay, but it’s not actually what’s going to motivate more people to want to ride. Protected bike lanes are a way to do that,” says Lane.