NOTE TO READERS: I’ve updated this story to reflect the cost of the 500 block project, estimated at $2.4 million. My earlier version mentioned only $250,000 in funding related to other Herring Cove Road projects.

The city is creating a new functional plan for Herring Cove Road, featuring an “interim” plan with considerable improvements to walking and cycling, and an “ultimate” plan that includes some short but key transit lanes.

The complete plan, which you can see here, looks very promising, but the unknown timeline for implementation, especially when it comes to transit improvements, takes the potential wind out of its sails.

The interim plan shows an active transportation greenway (path for cyclists and pedestrians) from the Armdale roundabout southward about one kilometre, all the way to Cowie Hill Road. From there, active users would split onto sidewalks and cycle tracks stretching another nearly five kilometres through the main commercial area and all the way past the 500 block, with its cluster of apartment buildings.

It’s more than Veronica Post expected when she set out in 2015, along with the Spryfield Community Association, to lobby for sidewalks along Herring Cove Road’s 500 block. Back then, the idea was simply to create a safe way for residents of the 500 block to walk in their community, which to this day has (mostly) only gravel shoulders.

Their timing was good. The Herring Cove Road 500 block made it to the immediate sidewalk list in the 2017 Integrated Mobility Plan, and the project may even get built this year, if city engineers can get the detailed planning finalized in time for tendering.

The project will be an expensive one, estimated to clock in around $2.4 million.  The funding is expected to be approved along with the rest of the city’s capital budget this month, along with another $250,000 budgeted for other work on Herring Cove Road. 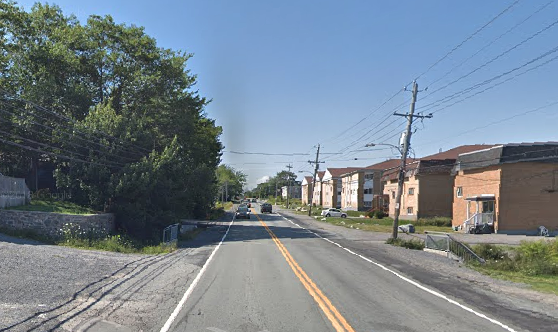 The 500 block of Herring Cove Road is due to get actual sidewalks, and bike lanes, this fiscal year, if city engineers can complete plans in time.

“We realize how awesome it is that HRM recognizes the Herring Cove Road as a priority and they want to invest in sidewalks along both sides of the entire road,” says Post. “It’s pretty great.”

Of course, it’s going to take quite some time to build the remaining nearly five kilometres of this Herring Cove Road plan, from the roundabout all the way to Greystone Drive. Unless council decides to create a specific capital project to do it faster, the build-out will be piecemeal.

“As paving projects come up along Herring Cove Road,” says HRM engineer Harrison McGrath, “we would build the interim solution. And then the the ultimate solution is something that we’d have to plan for long term in the capital budget.”

“That’s my one concern with the plan,” says Post, speaking personally and no longer as part of the Spryfield Community Association. “They identify transit priority lanes as part of their ultimate plan, but not part of the interim one.” 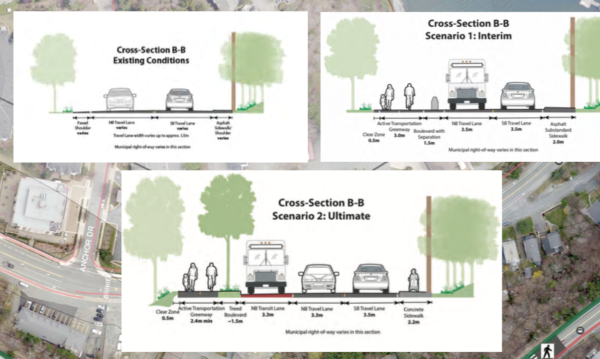 The “ultimate” plan in this case may not quite live up to its descriptor. The plan calls for two single-direction transit priority lanes, a one-kilometre lane to get buses past morning traffic queues at the roundabout, and another shorter one, headed southward, between Williams Lake Road and Dentith Road. So, not an ambitious long-term solution to transform Spryfield into a transit-oriented community, but a couple of modest fixes, just enough to get buses out of the biggest pinch points they currently experience.

But that’s not to say these modest fixes couldn’t have big impacts. Over the course of the transit day, there’s about 180 bus trips coming and going along Herring Cove Road, with about 7,000 riders. Most of those are on routes 9A and 9B, which have seen ridership boosts since being revamped as part of the Moving Forward Together plan.

During the morning (5:30am to 9:30am) there are 26 buses headed from Spryfield to downtown, or roughly one bus trip every 10 minutes. The on-time performance is not great, however, with only 72% of measured stops along those routes hitting their “on time” target, between one minute early and three minutes late.

According to Census Mapper, most of the census districts along Herring Cove Road already have a much higher percentage of people taking transit to work than the city average of 11.8%. Save for two districts around the intersection with Purcell’s Cove Road which are below average, the percentages are consistently higher, even getting as high at 28% and 39% in some districts. 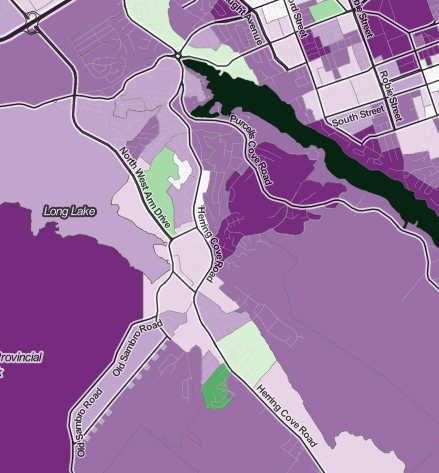 Transit to work, according to 2016 census data, by Census Mapper.

Post sees a pretty clear argument for much better transit along Herring Cove Road. “Transit is one of the things that’s accessible to people of all ages and abilities,” says Post. “So if you have limited mobility you can still get on a bus and get to the store or get where you need to go in the community.“

And then there’s congestion, says Post. “That’s something that really angers people. And the only way we can deal with that is if there’s fewer cars on the road, if there’s fewer people commuting in the morning in single-passenger vehicles.”

Although for decades Herring Cove has been on the desired widening list, with the city acquiring properties as recently as 2004, there seems to be consensus that increasing vehicle capacity of the road will not help people get to the peninsula faster. Traffic backs up along Herring Cove Road in the morning simply because it takes that long for the volume of traffic to filter through the roundabout. “Roundabout capacity is the bottleneck,” says McGrath, a sentiment echoed in the Integrated Mobility Plan.

Post worries that without transit lanes there to help reduce traffic build up in the last kilometre before the roundabout, the current plan runs the risk of exacerbating conflict in the community, especially when it comes to other changes, like trading a vehicle lane for bike lanes.

About 2/3 of the distance covering the project would lose a single vehicle lane under the plan, going from three and four lanes down to two and three. All of the lane reductions happen out of range of roundabout-induced traffic, and one segment, between Cowie Hill Road and Highfield Street, would actually gain a third lane for left-turning traffic.

“We have a lot of people who really, really want bike lanes and more active transportation,” says Post. “Then there’s another group in the community that’s very opposed to bike lanes because they will be taking away a lane of car traffic. So we have these two opposing camps. And for me, if we have bike lanes and not a transit priority lane to help ease congestion, that could cause further friction amongst those two groups.”

Of course the problem with transit lanes, and the reason they are relegated to the “ultimate” version of the plan, is cost. The transit lanes are proposed in addition to, not replacing, the current vehicle lanes, so they will require street widening. And the area where they are most needed, the kilometre of Herring Cove Road closest to the roundabout, has some extremely challenging terrain, with steep grades on each side in some places.

When I spoke to McGrath in March, he expected the project consultants, Alta Planning from Ottawa, to be wrapping up the project within the month, including high level cost estimates for completing the interim and ultimate plans.

They will not, McGrath says, be including a cost estimate for converting the third reversing lane at the roundabout to the needed transit-only lane. “We did a quick traffic review and the impacts are so large that it would back up past Cowie Hill,” says McGrath, “and then transit would also be stuck in that queue.”

But despite the unlikelihood of it happening, it’s unfortunate not to cost out, for comparison’s sake, a slightly longer transit lane extending past Cowie Hill, versus a shorter one that requires widening at Herring Cove Road’s most physically challenging stretch. (You know they would have widened the darn thing already if it was anywhere near affordable to do so.)

The main reason to cost out both options would be to help demonstrate that the costs of this project are not really just about transit lanes, they are also about private vehicle lanes. Transit lanes only seem hugely expensive to us now, because we’ve reserved all the expensive real estate for private vehicles. But what if we could get a transit lane, and dramatically shorten morning commute times for transit riders, without breaking the bank? Unfortunately we will only know the answer if we actually ask the question.

For the time being, the proposed transit lane comes at the cost of widening Herring Cove Road between the Armdale roundabout and Purcell’s Cove Road. While we wait to find out the price tag for that major piece of work, let’s hope that council starts figuring out how to pay for the transportation transformation we know we need.