You are here: Home / City Hall / The MFT hits the fan

Halifax Transit’s revamped route network is back and up for discussion at council’s transportation standing committee this Thursday. Reportedly, for putting together the “Moving Forward Together” plan, transit staff looked at 20,000 comments in coming up with the changes in this latest draft. And now councillors will get their crack at it.

The outstanding highlight of this plan is the inclusion of transit priority measures (TPMs). Of course, the idea of getting public transit through traffic faster has been a major principle of this whole process since day one, but it warranted almost no attention in the first draft. In this new draft, Halifax Transit has specifically called out two areas that need major investment in TPMs: Bayers Road and Gottingen Street.

However, the document also includes warnings about how expensive TPMs can be:

In a historic city such as Halifax, however, the narrow road rights of way often mean that widening roads to build a sidewalk, create additional parking, or add another lane for traffic or for transit’s exclusive use is a very costly proposition. Value judgements must be made about where and when significant investment in Transit Priority Measures makes sense.

It’s almost as if the writers are pre-emptively letting councillors know they’ll understand if the city chooses not to fund TPMs. The writers also seem to be warning us that transit priority on Bayers Road and Gottingen, even though we know we need it, will not happen anytime soon.

Due to the complexity and investment required, it is anticipated that it may take several years to design and implement the appropriate measures.

Several years is way too long! Bayers Road and Gottingen are just two of our many long-standing transit chokepoints. Let’s hope council finds a way to get stronger language around the priority for transit priority.

However if anything should be rushed through council to implementation faster, it’s the list of 11 low-hanging-fruit-style TPMs that are included in this plan. Halifax Transit didn’t come up with these on its own; they’ve been a long time in the works from the city’s manager of Strategic Transportation Planning, Dave McCusker (in a study that has yet to make it to the council table).

The piece de resistance on the list is the dedication of a toll lane on the McDonald Bridge. While not a dedicated traffic lane, a toll lane still has great potential for speeding up transit, such that many riders are definitely going to find themselves asking, “why they heck didn’t they do this 10 years ago?”

Let’s hope that councillors see clear to having these “easily implementable TPMs” move along efficiently towards reality, rather than taking five years as the plan predicts.

The plan also includes the formula used for analyzing the cost versus benefit of transportation priority measures, which may start to explain why it feels like the city is dragging its feet in this department.

Analysis includes figuring out how much a given TPM will cost, how much time (and money) it might save for bus drivers and riders, how much time (and money) it might save or cost single vehicle drivers, etc. But strangely, it doesn’t take into account the potential for TPMs to contribute to an increased transit modal share, and the potential windfall there in terms of deferred road infrastructure costs. I thought increased transit modal share was the name of the game in transit planning, but it appears not important enough to count in the deciding process of whether or not we invest in TPMs.

How exactly do you evaluate a network?

When your average non-transit professional person (including, say, journalists and city councillors) looks at this proposal, how do they judge how it works? Even transit planners can’t read this document and instantly visualize how the system will function for the myriad of different people that might use it.

Transit planners use modelling systems. They plug in variables and conditions to computer models that then give them snapshots of how things will work, including how long it will take to get from A to B.

This is the kind of information that Sean Gillis of It’s More Than Buses thinks we all need in order to have a productive discussion about this last iteration of the new transit route map.

“The plan has lots of information on how to evaluate individual routes, but fails to answer the big questions: How many riders will be able to get to what destinations? And in how much time? How many travel options will the plan provide, and how many new riders will it attract? If we can’t answer these questions, how can we judge success?”

Witness Transit Heat Map: Pick from any of Halifax Transit’s 2,600 bus stops, and this handy site will draw you a map showing how far and where you can get in an hour, colour coding by how long it will take to get there. 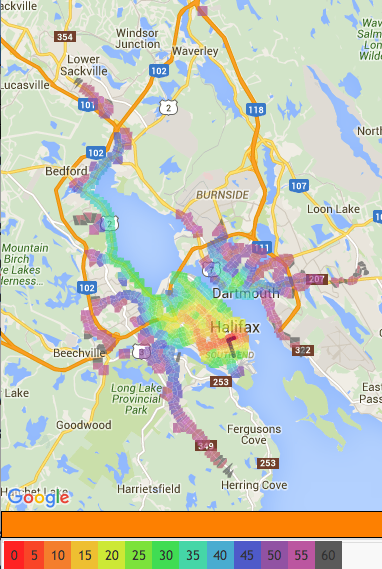 The transit heatmap from the Halifax Central Library, showing how far a rider can get in 60 minutes, based on the November 2014 transit system. 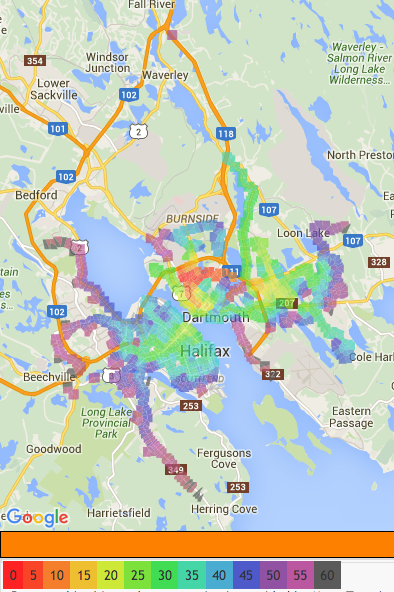 The transit heatmap from the Highfield Park terminal, showing how far a rider can get in 60 minutes, based on the November 2014 transit system. 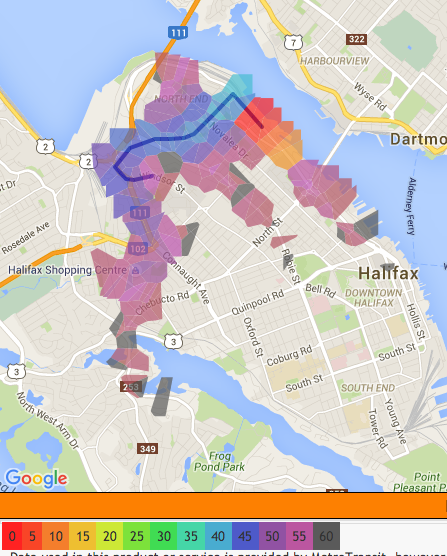 The transit heatmap from the Halifax Shipyard, showing how far a rider can get in 60 minutes, based on the November 2014 transit system.

“Right now we’re really concerned that so much of the feedback has been very much on individual routes,” says Gillis. “People know the routes they have, and they say, oh I can’t do that now, that’s a bummer. It’s totally understandable… We don’t have a way like this to show how it’s changed.”

For example, in this new plan, Halifax Transit has reverted the new route #8, which had previously gone from Sackville to downtown Halifax via the North End, back to it’s current routing as the venerable route #80. Instead of a corridor route hitting important spots in Halifax’s North End, such as Mulgrave Park and the shipyard, the reverted #8 will follow the already well represented Robie-Spring Garden corridor that the current #80 travels.

Halifax Transit reverted the #8 to Robie-Spring Garden in response to 550-600 comments from the public. Gillis doesn’t discount the complaints, rather he thinks folks had a point in that there was no connection from Bedford to the Mumford terminal. “The complaint was valid,” says Gillis. “But the solution that they proposed took away so many other good things that I think vastly outweighs the new proposal.”

For councillors to intelligently go through and analyze the changes proposed by this plan, they need more information, and they need information presented in a way that is intuitively understandable.

Gillis knows it’s a tall order, but at the same time, he says, “it’s critical work.”

Gillis proposes that in each community, Halifax Transit take  four to five representative places and do the analysis on where people can get to and within how long. “Ask the question: Can they get to hospitals, universities, downtown Dartmouth, the denser areas of Burnside, Micmac, Woodside, Bayers Lake, Joseph Howe drive, the naval dockyard?”

It’s a good idea. With some tools to help picture what this new route network can do, we won’t be stuck judging it strictly by what’s changed about our current routes, and we’ll be able to better see what trade-offs we’re making. For example, can reducing overlapping corridor routes even further free up resources for better local service? Sean Gillis thinks so. But the point shouldn’t be debatable, we should be able to see what the trade-offs amount to, in layman’s terms.

“Start asking your councillors to get you this kind of information,” says Gillis. “Then we can start a real conversation, and that’s when we’ll get a great transit system.”