You are here: Home / City Hall / The means to get home: a late bus for Halifax? 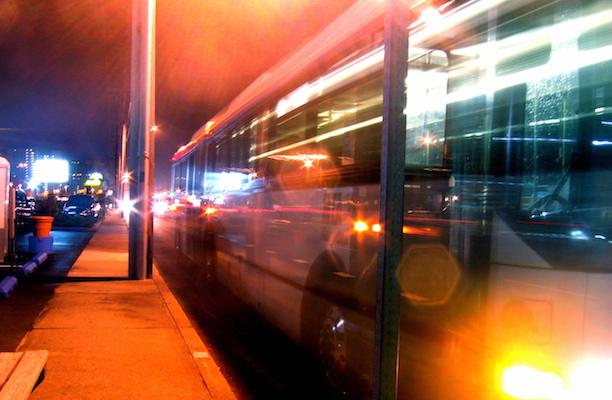 To help revelers get home safely, the city’s transit workers extend services on 31 routes plus the Alderney Ferry by about 2 hours, to between 2am and 3am.

The service is appreciated, says Glen Bannon, manager of transit operations, even if we don’t know exactly how popular it is.

Halifax Transit normally uses fare boxes to gauge ridership, but on New Year’s Eve the fare boxes shut down at 6pm, to encourage people to leave their cars safely stowed at home for the duration of the festivities. So outside of anecdotal evidence – there are definitely lots of happy people taking the bus on New Year’s Eve – we don’t have any hard ridership numbers to show for the effort.

The ferries are a different story. Thanks to Transport Canada guidelines requiring accurate passenger counts on vessels at all times, we know that late-night, free New Year’s Eve ferry service is popular. Exactly 474 people caught a late-night boat this year, up 66 per cent from last year, possibly due to increased frequency. (Over 1600 rode the ferry from 6pm onwards.) Some of the busiest trips happened in 2010, when NYE fell on a Friday. That year the ferry carried 290 at 12:15am, and another 281 at 12:45am, practically rush-hour numbers.

“This type of service offers a very clear benefit,” says Glen Bannon. Feedback from police and transit supervisors says traffic is lighter on peninsula thanks to the service. The same is true of other free ferry events, like Canada Day, Natal Day, or for the Holiday Parade of Lights.

But the New Year’s Eve service isn’t just about reducing traffic at exceptionally busy times. It’s about safety. The service extension is offered in support of MADD Halifax, whose volunteers collect donations at ferry terminals. “The message is drink or party responsibly, however you want to put it,” says Bannon. “We are linking that message with the means to get home.”

The inevitable question is: What would it take to provide that means on other nights of the year, when downtown is also packed with partiers (and the workers that serve them), even if not on the scale of New Year’s Eve?

Without numbers it’s difficult to say how feasible it might be to create late-night service, even if just on weekends, for Halifax Transit. But we do know other cities do it.

Edmonton ran a pilot program in 2012 providing late night service on Fridays and Saturdays out of its entertainment district. Then this fall they launched Late Night Owl Service, featuring five routes that run till 3am, seven days a week.

Vancouver runs the Night Bus, with 12 routes running various frequencies well into the wee hours, and Toronto has the Blue Night Network, an overnight network of bus and streetcar routes. 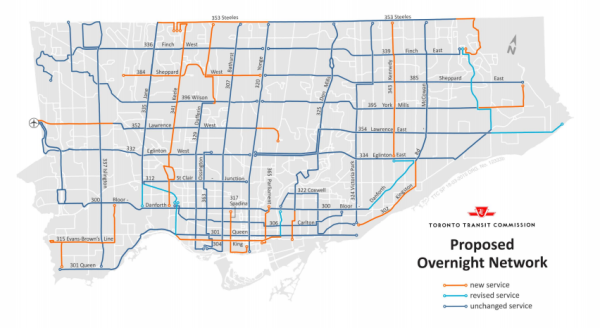 Back in 2009, the Halifax Student Alliance requested a late night transit pilot from city council. The HSA believed that too many students were stranded at work or study when the transit system shut down for the night.

The year before that, in a report on the Mayor’s Roundtable on Violence, Dal criminologist Donald Clairmont recommended that the city beef up late night transportation opportunities with better taxi availability and “the possibility of a late night bus service, perhaps with onboard security.” The recommendation was echoed later in the report, focussing on students:

Based on students’ views about the inefficiency of public transit options in the evenings, the municipality may want to consider re-adjusting night-time schedules for Metro Transit, at least within the peninsula, on weekends. Given the high proportions of student “walkers” living in the South End, which happens to be the area where most complaints of drunk and disorderly behaviour and a good number of the assaults occur, it is possible that such a transportation policy could lower the incidences of such conduct while students make their way home after a night of Downtown recreation or work. Adding more public transit options at night provides safe alternatives, not only for students, but for all residents of Halifax. Perhaps, given the importance of the so-called “night-time economy” to HRM and Nova Scotia, a system of free transportation could be prudently implemented after midnight, along the line of FRED (i.e. free rides everywhere Downtown) which was initiated to facilitate the movement of tourists; it should be noted that HRM already provides subsidized bus passes for students and others.

City councillors never did authorize a pilot to test out late night service in Halifax. They passed along the Halifax Student Alliance request to Halifax Transit and the Board of Police Commissioners, but with no instructions for further action.

It’s great that we can enjoy the safety and convenience of extended hours (and free service) on New Year’s Eve. Perhaps it’s time to put some resources into seeing what those extra two hours could mean for the rest of the year.