You are here: Home / City Hall / The Great Cogswell Screw-Up, Round 2? 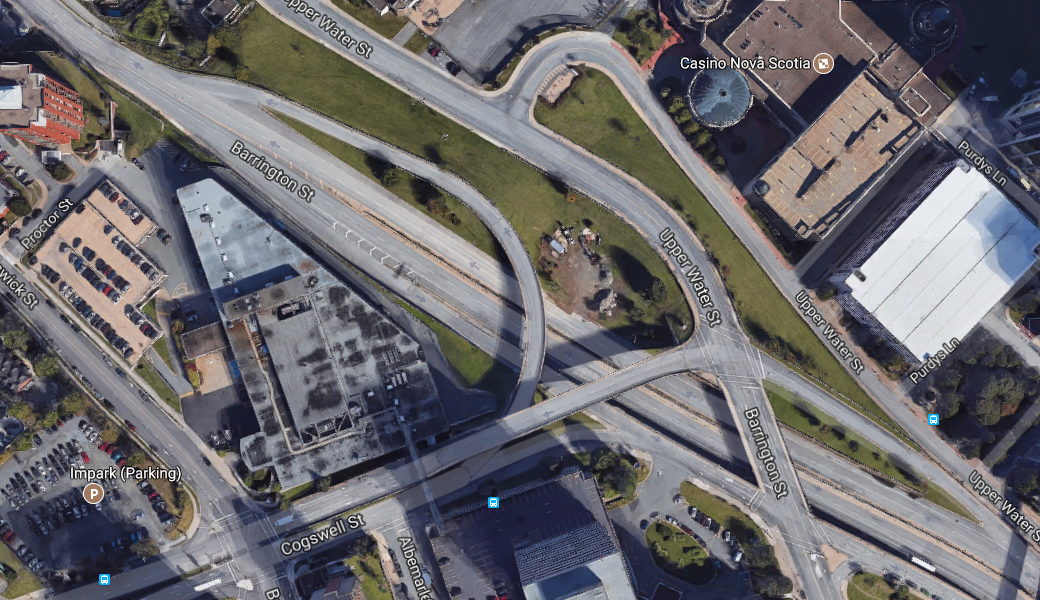 There were a few golden moments at the Art of City Building conference held yesterday at the Central Library, one in particular when architectural historian and critic Hans Ibelings shared a favourite cartoon: One planner says to another, “Let’s replace the mistakes of the past… with new ones.”

The joke is relevant in Halifax these days as we continue to move towards replacing one of the heftier planning mistakes of our past: the Cogswell interchange. The question looms: what mistakes will we put in its place?

Of course, it’s hard to beat Cogswell in the mistake department. The interchange was opened in 1970 and rendered pointless by 1971, when the plans for its accompanying waterfront expressway were officially scrapped. The damage, of course, had been done: a neighbourhood and street grid eradicated, and a downtown street (Barrington) turned into the city’s shortest expressway.

Right now, city staff and contractors at WSP Canada are creating the detailed plans for Cogswell, with a goal of 60 per cent complete design sometime in early 2018 so that council will be able to approve it by the end of March 2018, in what is being described as a “go/no-go” decision point. (They either say yes, or effectively waste all the money they’ve spent on detailed design, and delay the project by who knows how long.) 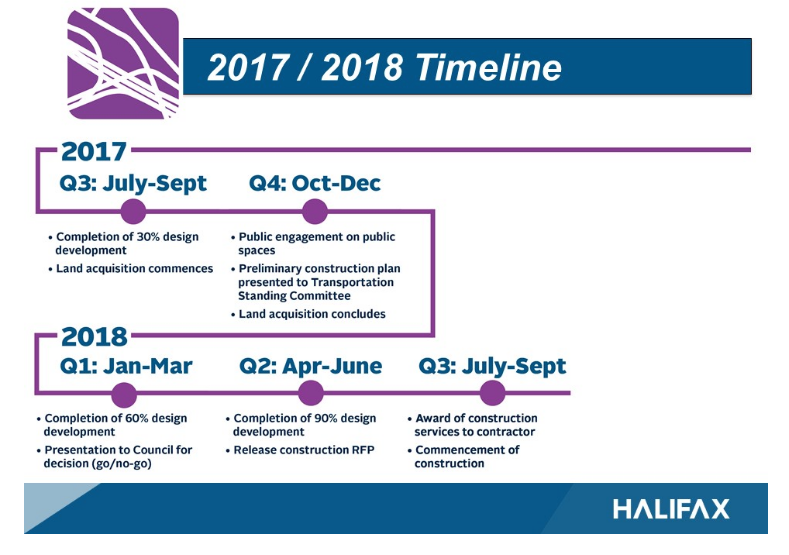 When I first saw this new timeline I thought, whoa, what happened to the 30 per cent design review? In its (very detailed) Cogswell Transformed final report from 2014 (huge pdf here), Ekistics Planning and Design put forward a timeline that included a “30% design review” and “council approval of planning and real estate.” These were to happen before the 60 per cent detailed planning work and the eventual go/no-go decision. The timeline graphic was even used in staff’s presentation to council in May 2014, right before council approved a motion moving forward with various aspects of the project. 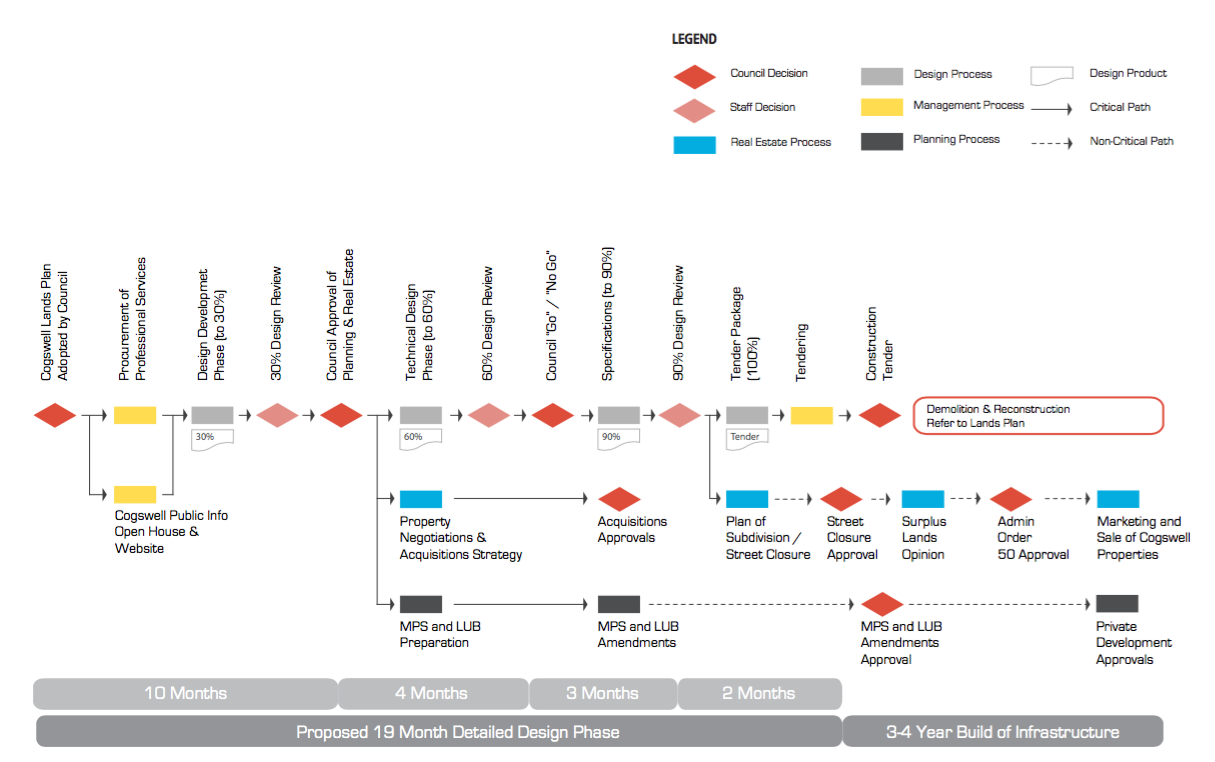 But it turns out that sometime between 2014 and 2017, the timeline and review points have changed. The idea of council approving planning at the 30 per cent design stage was abandoned for a 30 per cent approval by the Cogswell Steering Committee. The Cogswell Steering Committee is not a committee of council, but rather a senior staff group, and so its meeting agendas and minutes are not published on the city website.

Both Cogswell redevelopment director Donna Davis and councillor Waye Mason have told me that this new timeline, featuring the go/no-go decision sometime in early 2018, was approved by council at some point. Unfortunately, I just can’t find the paper trail. It could be due to the astoundingly poor functionality of the new HRM website, or it could be because this didn’t happen in a public meeting. (Update: it turns out this is because the update was submitted to council in the form of a memorandum from senior staff.  So no approval, but rather an update.)

And regardless of whether or not council has approved this new timeline, I’m shocked that anyone would think it was a good idea to move through a 30 per cent review in private, leaving all the political and public discussions over this design to happen once the majority of the work has been completed.

Since the last detailed information on the Cogswell redevelopment came out in 2014 (docs available here, but not on the halifax.ca Cogswell project page), much has happened in Halifax transportation planning. The city’s upcoming Integrated Mobility Plan promises a major shift in infrastructure resources towards sustainable modes of transport, and away from one-person vehicles. When the IMP finally makes it to council (now scheduled for December), we will likely see a minimum grid of protected bike lanes and the city’s first bus-only lanes included. We may even, if we’re lucky, see the prioritization of pedestrians.

With the tear down and redevelopment of Cogswell, we are quite literally re-drawing a street grid of our choosing. Given the substantial shift in our collective thinking about transportation and development, it’s a missed opportunity not to give our plans for Cogswell further public scrutiny.

Of course, we are not completely in the dark. In addition to the reports published in 2014, we do have some idea of what the 30 per cent design looks like. The city published a one page concept map this month, and there’s also a slightly older 3D video rendering of what the new site will look like from the perspective of a hang-glider moving through the new street grid. But both are thin on details. 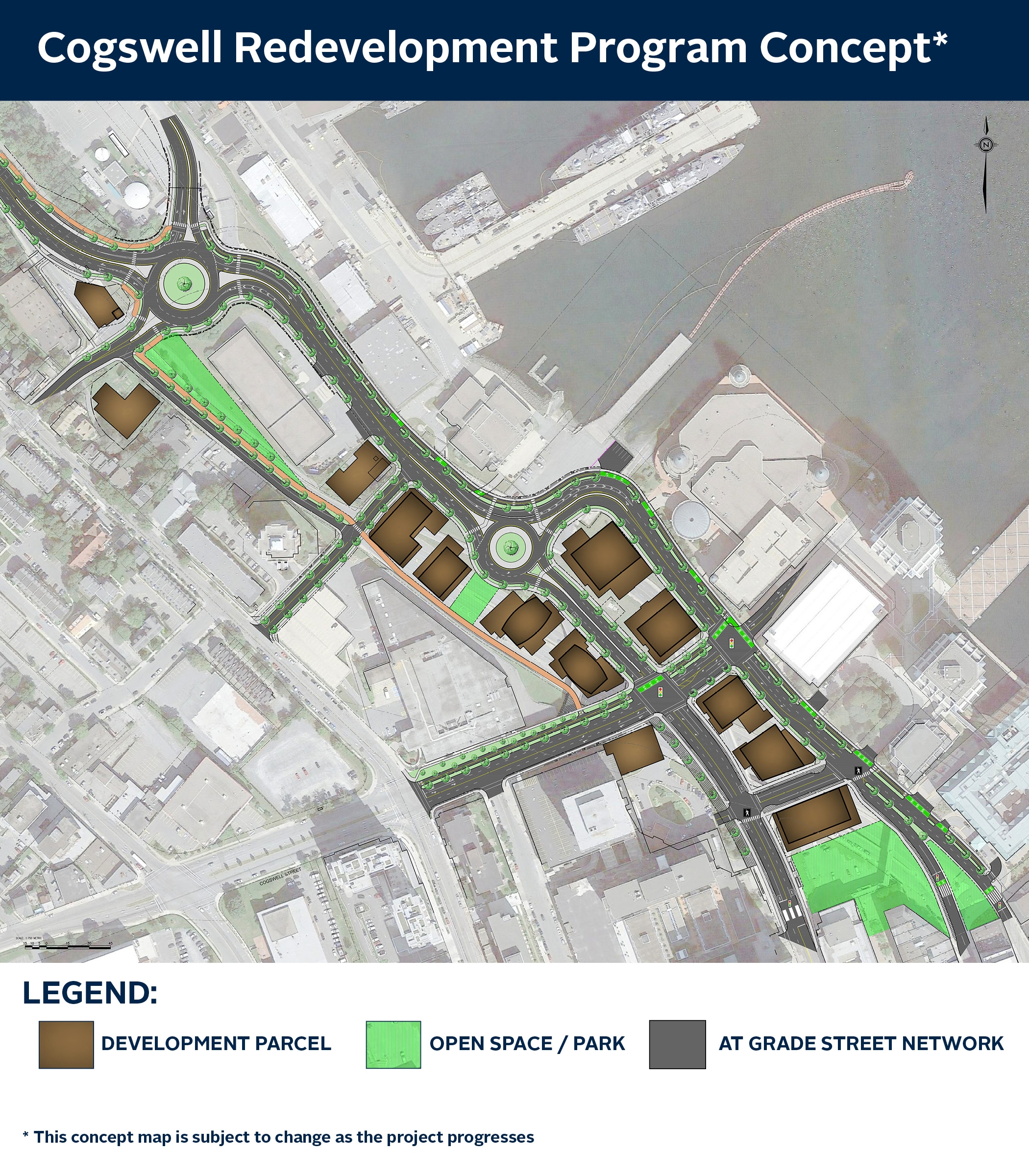 One thing you can’t miss on the concept map: two large roundabouts. The first joins Cornwallis, a newly-aligned Barrington, and Valour Way, the road into the naval base. And another where the new Upper Water splits off from the new Barrington.

The plan also features a bi-directional bike path connecting the Barrington Greenway with the bike lanes, such as they are, at Hollis and Lower Water. There’s also a new multi-use pathway connecting Cornwallis to Cogswell, where a new bidirectional on-street bike lane heads up to the Commons.

There will be new green spaces surrounding (but apparently not on top of) the sewage treatment plant, as well as a new public square at the head of the current Granville Mall, between Hollis and Barrington.

In terms of transit, you can’t see it on the concept plan, but previous reports indicate a “transit hub” at Granville Square, adjacent to the  current major downtown transit terminal, and a few blocks from the ferry terminal. There is also a small bit of transit priority inserted into the plan, with the outside lanes of Barrington marked as bus-only from Scotia Square up to the first roundabout. (I would have missed these entirely had not Donna Davis, the director for the project, explained that they were there. If you zoom in real close to the concept map, you can see the diamond markers on the bus only lanes.)

Basically, there’s plenty to be excited about in this 30 per cent concept map, and not just because literally anything would be better than what we have now. There’s plenty to be excited about, if you know what’s there. But without any accompanying explanation, the concept map just doesn’t convey most of the information that Haligonians need to know in order to actually understand this project.

Davis assures me that as the designs progress toward 60 per cent over the coming months, more information will come to light. And that the public will be consulted — not about the entire project, but rather just for the design of the green spaces that have been carved out.

Which means, of course, that HRM is not really interested in further input on the bones of this plan. If it was, there would be a council decision point (and public report and debate) somewhere between 2014’s go-ahead-and-plan motion, and a go/no-go vote on a 60 per cent complete plan in 2018.

Sadly, this plan, which proposes to heal a giant scar on our city, which redraws streets and extends our downtown by several new blocks, seems poised to proceed without further public discussion.

Having spent yesterday at the Art of City Building conference, I can’t help but think of what a missed opportunity it was that the gathered crowd (over 300 local planners, developers, architects, and enthusiasts) and the gathered experts (among others from New York and Scandinavia, former Toronto chief planner Jen Keesmat) didn’t get a chance to hear about the plans for this transformative and historic city building project, and discuss the strengths, weaknesses, and possibilities therein.

Questions like, do we really need two consecutive roundabouts downtown? And, how do those intersection designs affect efficiency of other modes, like pedestrians and transit, which currently make up about 60 per cent of the traffic into the area?

And, how will the transit network change with this new street grid? What is a “transit hub” and are two blocks of bus lanes enough to get buses out of downtown faster than cars?

And, what alternatives have been explored that could get truck traffic off the waterfront to Barrington North corridor?

These are some of the questions I will try to explore in the coming weeks in the Examiner. I’m asking readers to pose their own questions and concerns in the comments, and if I can find answers, I will report back.

We need to step up the critical public examination of this project, if only out of sheer respect for the history at play here. Erecting the Cogswell interchange was a colossal error in urban planning, but it could have been much, much worse if the decisions of the urban planners of the day had held sway. Luckily, the vociferous input of citizens (and a heritage group no less) prevailed.

I’m not saying the current plans for Cogswell represent a colossal error. Far from it. But I do think they merit the scrutiny and consideration of the citizens who will finance their implementation and live with their final product.