Not surprisingly, there have been far fewer calls to 311 so far this year when compared to last, though it didn’t start out that way. “Our call volumes at the beginning of this year were outrageous,” says Jane Young, manager of Halifax’s citizen contact centre. “I think there was a bit of a leftover from last winter, people thinking oh, here we go again.”

Young points out that in snow events it’s not just snow clearing calls that give the numbers a bump, but every other city service that’s affected by snow, like garbage pick-up, and transit.

But this year, says Young, “after every storm, because the snow clearing has been very successful, our call volumes are going down. I feel like the public is starting to trust a little bit more again, that we are going to get to it within the standards.”

The big drop so far seems to be in complaints about street snow clearing: They are down almost 46 per cent from the same period last year. Sidewalk complaints are down too, but by less. There were 25 per cent fewer calls to 311 for sidewalk snow clearing issues so far this year, but to be fair, last year’s icy disaster was only half over by February 16, 2015.

For every incoming call about snow clearing, 311 operators have the unenviable job of determining whether the call is “dispatch able.” That is, worthy of being forwarded to a work supervisor (who could either be an HRM employee or an employee of one of the private contractors).

“The only calls during a weather event that we would dispatch immediately would be those that are of an urgent nature,” says Jane Young. “So there’s a catch basin that’s covered over in ice, and there may be some flooding involved. Things like if a resident has to go to a serious medical appointment such as dialysis or chemotherapy or things like that.”

A failure to meet standards does also warrant a dispatch. “Six hours after the event if you don’t have a cut through on your street and you call, then we dispatch every single call.”

If you call to report a snow clearing problem before the allotted time for your street or sidewalk has passed, then 311 operators will treat it as a Tier 1 call, with no follow-up required besides recording the call for tracking purposes.

So if you’re calling about an uncleared intersection or bus stop less than 48 hours after the storm ended, you likely won’t be getting results outside of another logged call for the season.

Unless, that is, Halifax snow operations staff notices a pattern. “If that happens storm after storm, and it’s always this street that they are calling about – perhaps there’s a trend there that road operations would look at,” says Young.

There is a third category of call that get referred to the city’s Road Operations, “for review and/or response if necessary.”

And finally, don’t tweet the city (like I do) and think that it’s getting answered in the same way as a 311 call or email to [email protected] 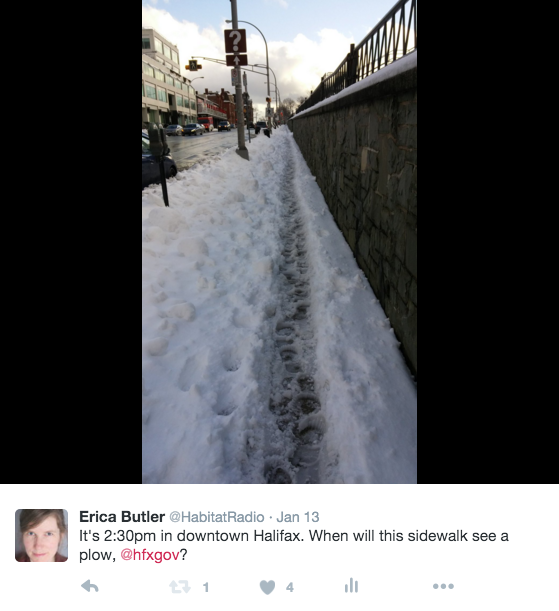 Tweets are handled by HRM’s communications department, who will normally inform you if you’re not within standards, but either way your concern doesn’t get logged in the right system until it goes to [email protected] or 311.

Jane Young says she’s talking to colleagues across the country about what they are doing with Twitter. “There are some municipalities that have a twitter account in order to respond to service request issues,” says Young. “There’s all kinds of issues around that, privacy and all kinds of stuff. I really don’t know if that’s in the cards for us.”

The numbers breakdown on snow-clearing-related calls to 311 this year and last year, for the period December 1 to February 16.