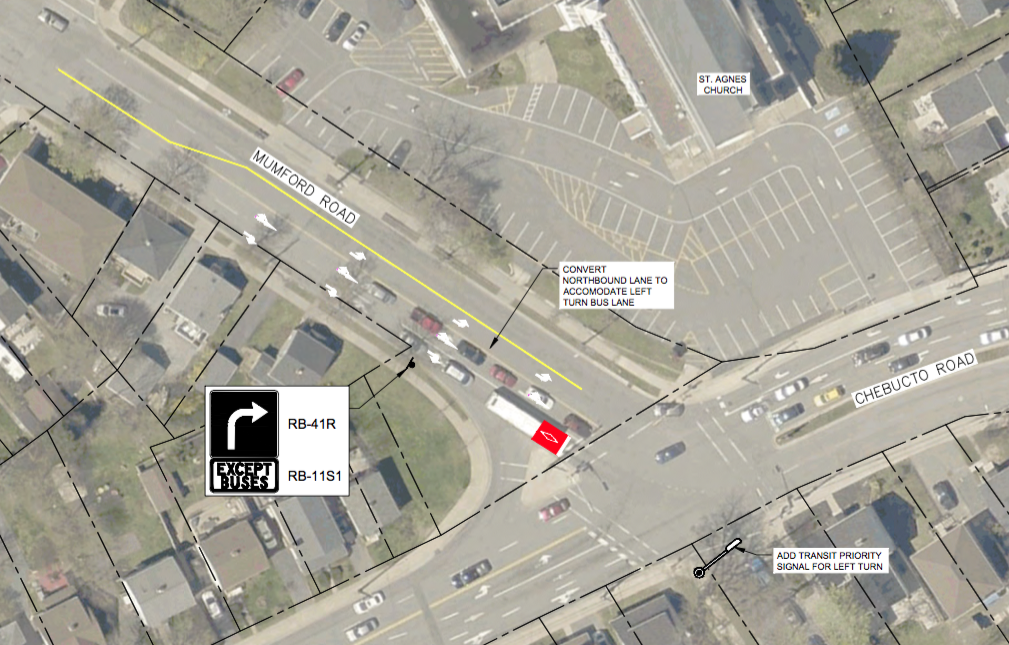 Conceptual layout for proposed changes to Mumford at Chebucto Road, to allow buses to move through the intersection more efficiently.

At long last, Halifax staff have finalized a list of small fixes to our streets and intersections that will start getting our buses through traffic faster.

This is great news for transit riders, and will collectively save them tens of thousands of hours on buses every year.

Unfortunately, the timeline to implement these fixes is long: five years in total to design and build 11 relatively minor projects, like designating a bus-only toll lane on the Macdonald Bridge, widening roads to allow for transit-only queue jump lanes, and changing the rules to let buses turn or go straight where currently prohibited.

The total cost of all projects on the list comes to $1.2 million, according to a consultant’s report going to the Transportation Standing Committee this week. The measures could save transit riders 92 user hours per day collectively. On the flip side, five of the measures will cost time to drivers and passengers in cars.

Scroll down for a chart showing delays and time savings project by project.

So why would we take five years to complete a short list of small projects that could actually positively impact the quality and reliability of our transit system? The short answer: because that’s how we do it.

“In terms of budgeting, it’s a lot easier to have a steady stream of funding year after year and start picking off priorities one by one,” says David McCusker, Halifax’s regional transportation planning manager. “We do that with a lot of programs like new sidewalks and traffic signals and stuff like that.”

This all sounds very reasonable except when you consider how far behind we are with transit-friendly design on our streets. And the fact that many of the measures on this list should have been done years ago.

Consider the dedicated transit toll lane on the Macdonald bridge, still two years away according to this plan. Could it really be that we can’t find $12,000 this year to help out the dozens of buses per hour that have to cross the Macdonald during rush hour? Back in the late 90s, before the third lane was built, there was discussion of using the extra width as an HOV lane to carry buses and cars with multiple passengers. It’s now two decades later, and we are delaying the designation of a single Halifax-bound toll lane to buses. 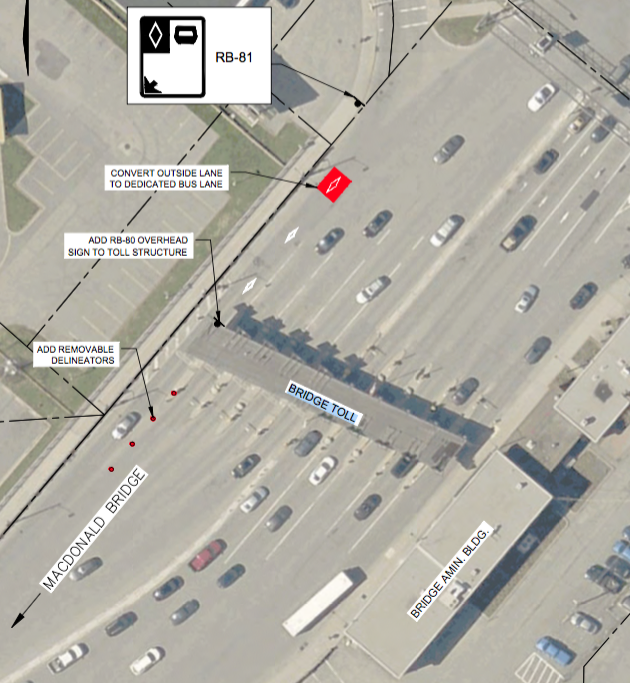 Conceptual layout for creating a transit-only toll lane on the MacDonald Bridge. The project would cost $12,000, and is slated for 2018.

McCusker explains that the toll lane delay is due to pending changes that the Bridge Commission will be making to how they collect tolls. But if implemented in 2016, a transit-only toll lane would operate for two years before this happened. Why make cross-harbour transit riders wait so long for such a simple and cheap fix?

The good news is that we could implement these measures faster, without extra costs. “If we were asked to do the entire list in one year that would be a challenge,” says McCusker, “but accelerating the schedule is not that difficult a thing to do. It would just be reallocation of some resources.”

“We’d like them to happen faster too,” says McCusker, but,”it’s not typically the way stuff gets built here.”

With no staff recommendations for faster implementation, the timeline is essentially up to council. “If [council] wants an accelerated program, they can do that in the budgeting process,” says McCusker.

Considering councillors have been known to interrogate Halifax Transit staff about why ridership is stagnant despite increased revenue and resources, they might just be interested in measures that could positively affect ridership.

Each of these measures makes a small improvement to reliability and schedule adherence. Altogether, they could impact the overall efficiency of the system. They will also up Halifax Transit’s marketing game by increasing its positive presence on the street. What better advertisement for transit than having buses slip by cars stuck in rush hour traffic?

Ultimately, this list of measures is small potatoes. McCusker is the first to acknowledge this. “These are fairly small scale projects, and this is really just the start for us. We know we have to look on a corridor basis and doing significantly more than this, and that’s going to happen in the coming years.”

The fact that these are tiny steps, with real transit priority plans (for things like dedicated transit or HOV lanes) still to come, convinces me more than anything that they should be happening sooner. At the current pace, Shannon Park will be built by the time the last item is crossed off this list.

For low-hanging fruit, it sure is taking a long time to reach.