You are here: Home / City Hall / Stop the Cogswell misfire!

On Tuesday morning at 10am, city councillors will convene to decide on what will take the place of the Cogswell Interchange. They will have spent the weekend with a staff report featuring this drawing of a 60 per cent complete design of the new street network, including two multi-lane roundabouts, separated bike facilities, two green spaces, and 12 development parcels, the sale of which is meant to fund the entire city investment in the project. 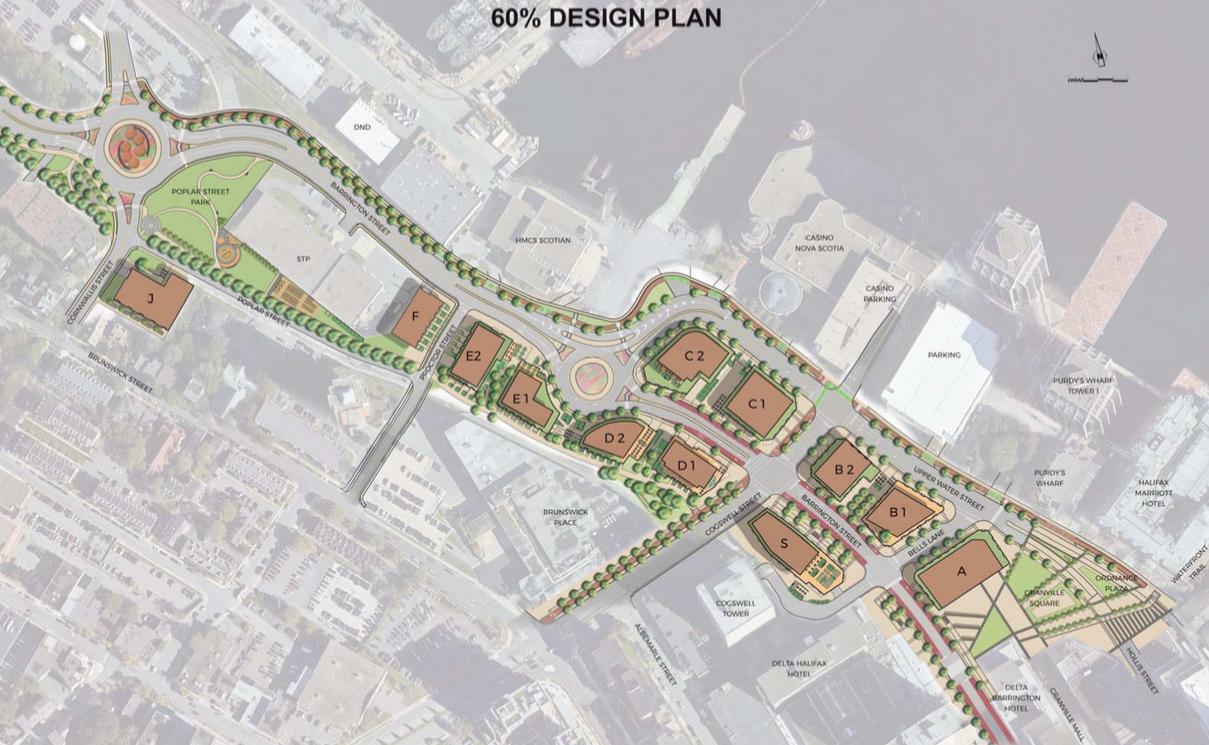 They will also have spent the weekend with a letter signed by a diverse list of 23 different organizations asking councillors to take a pause, and consider three key recommendations that could mean significant changes to the current plan.

The signatories include real estate developers, advocacy groups (for cycling, transit, and heritage among others), academics, business commissions, planners, and architects. The diversity of interests represented in the list is significant:

1. that the city abandon the constraint of designing the new district to be self-financing;

2. that the city consider possible changes to the proposed road network; and,

3. that the city start a public process to produce a combined land use policy and public realm design.

That last one, the letter writers propose, could even happen without delaying the project schedule or the demolition timeline.

Let’s tackle those one by one.

The concern with the self-finacing requirement is that instead of doing what makes the most sense for the city as a whole, the self-financing requirement for the Cogswell takedown essentially requires the plan to drive up the density on the parcels they offer for sale.

In 2016, the Urban Development Institute (a developer advocacy group who are signatories to this letter, and also the same people who hired Jen Keesmaat to review the Centre Plan) commissioned well-known planner Ken Greenberg to review the Cogswell district plan. He had this to say about the pressure to have the project self-finance:

The greatest long-term value of this development should be in the stimulus effect it provides to the downtown and the city, not the immediate return in making this project self-financing from density sales. A less aggressive, more realistic and quickly realized mid-rise “squash and spread” scheme should actually be more effective in realizing public objectives for place-making, leading to increased visitation, job creation, business development, and property and business taxes. Bigger is not always better and it would insure that the area is built out sooner and is not a 20-year plus construction site.

It’s a compelling message, this idea that the focus on self-financing is causing this plan to actually shoot itself in the foot. But in order to let go of self-financing, councillors would have to – gasp! – agree to spend some money on tearing down the interchange and growing a new piece of Halifax in its place.

The letter from the 23 organizations asks that “some changes to the road system would need to be contemplated” in the final Cogswell design. The letter doesn’t get into specifics, but some considerations might be the placement of two multilane roundabouts downtown, and the connectivity of both active transportation and transit priority infrastructure through and outside the plan area.

“While a great deal of attention has been devoted to resolving vehicular traffic flows with some innovations like the roundabouts,” reads the 2016 Greenberg review, “pedestrian flows would seem to have been given much less attention and resolution than [they deserve].”

Regarding public consultation, the question (which I’ve asked before) is: Has there been enough? I would say no, and it certainly seems that’s what the 23 signatories on this letter are saying as well. Their request is for “a robust public design process, which would result in a final district public realm design and detailed land use policy.”

As it now stands, councillors are being asked on Tuesday to approve a 60 per cent design for Cogswell, and then start the legally-required process of public participation to amend the municipal planning strategy and land use by-laws that the plan would require.

The letter writers are proposing to combine the processes, to allow the final design more public and expert scrutiny. They propose the final design approval could happen in concert with the required consultation process for land use by-law changes, and they promise to supercharge it with some private financing of “external design experts” like Gehl Architects.

“This expanded design process should not delay the project schedule or demolition timeline for the Cogswell redevelopment,” reads the letter.

The rumour mill would have me believe that this 60 per cent design is a done deal, and no-one inside the city — not senior staffers and not councillors — actually wants further public participation and buy-in on the Cogswell project.  On the other hand, city councillors are free agents, and there’s compelling points made by the 23 signatories of this letter.

“What the Cogswell Interchange Renewal project really needs to do is set a great example,” wrote Ken Greenberg in 2016. “There is a once-only opportunity to get it right and in doing so raise the bar on city building and public expectations of quality in Halifax.”

As much as the Cogswell plan ticks off some of today’s key urban planning boxes (density, active transportation infrastructure, green space), there’s a wide-ranging group of Halifax organizations who think the plan could be better. How much those opinions matter will be up to councillors on Tuesday morning.

Erica Bulter is the Halifax Examiner’s transportation columnist. Her work is supported by subscribers; click here to subscribe.