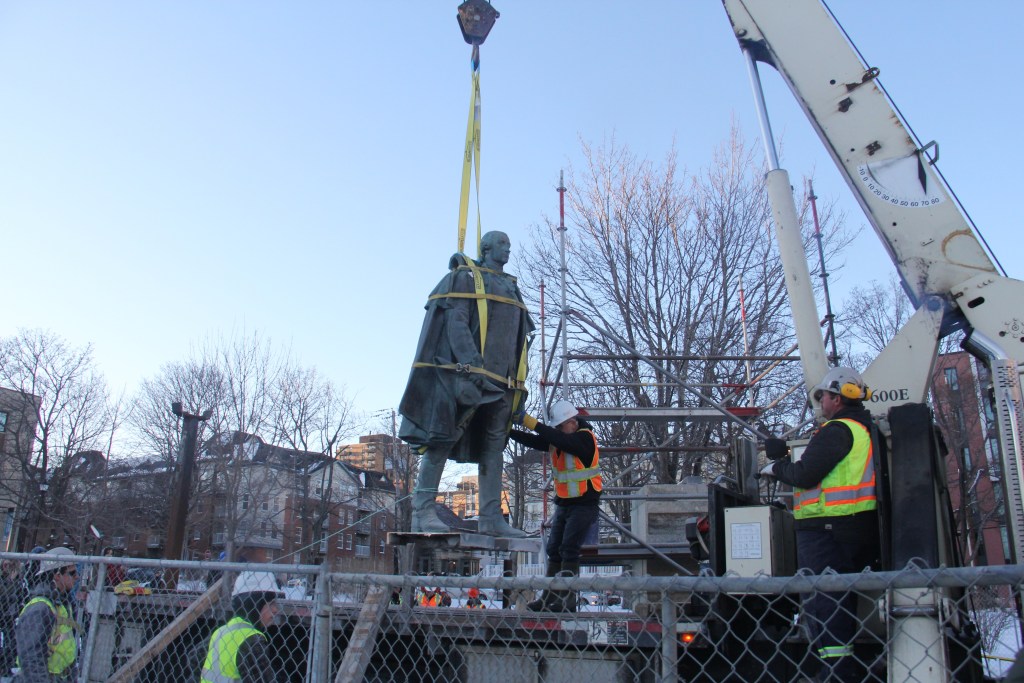 The Cornwallis statue being lowered onto a truck on Jan. 31, 2018. — Zane Woodford

The park where a statue of Halifax’s so-called founder once stood may no longer bear his name after council’s meeting on Tuesday.

The municipality stopped calling Cornwallis Park by that name after removing the statue of Edward Cornwallis — who was sent in 1749 to settle Halifax and later issued a bounty on the scalps of Mi’kmaq — in 2018.

“Beginning in the 1720s, The British Crown (now Nova Scotia) and the Mi’kmaq entered into a series of Peace and Friendship Treaties important for their promises and the establishment of the relationship between the two nations. The treaties remain in effect today,” reads a renaming application attached to the staff report.

Council voted last July to accept the recommendations from the final report of the Task Force on the Commemoration of Edward Cornwallis and the Recognition and Commemoration of Indigenous History. Those included keeping the statue in storage indefinitely, renaming the park, and renaming Cornwallis Street.

The task force recommended renaming the street to New Horizons Street to reflect the New Horizons Church, formerly known as Cornwallis Street Baptist Church, but Coun. Lindell Smith moved to let the community pick the new name for the street.

The report to council on Tuesday recommends a community consultation process to choose the new name. If approved, Smith would work with HRM’s Diversity and Inclusion staff to conduct research and define the consultation area, and then the municipality would put out a call for name suggestions.

“In order to reflect the culture and history of the First Nations, amendments to the policy regarding the use of apostrophes will be required to permit Council’s future consideration of corrections to accurately spell names in the Mi’kmaw language,” MacLean wrote in the report.

There are 911 dispatch and emergency management databases that can’t handle apostrophes, MacLean wrote, but “Civic Addressing staff will continue to work with 911 and EMO to ensure that there is no confusion between the spelling of street names with or without apostrophes.”

Council meets at 10am Tuesday. The full agenda is available here.