A view of Susies Lake in the proposed wilderness park. Photo: Irwin Barrett

Several months have passed since Halifax Regional Council voted down a sprawling development proposal for the Birch Cove Lakes. That near-unanimous decision to save the future regional park was an important moment for the city.

The mayor and councillors chose to listen to the public (1,420 letters were submitted, nearly all in favour of the regional park) and to stick with the blueprint outlined in the HRM regional plan, which clearly identifies the preferred outcome for the Birch Cove Lakes to be a public park, not a suburban development.

But what happens next? The immediate threat to the Birch Cove Lakes may have passed, but the city government is still no further ahead in actually acquiring the land necessary to make the regional park a reality. A lot of time has been wasted and the public has rightly expressed frustration with the lack of progress. Until that land is acquired, the Birch Cove Lakes will likely continue to face development pressures, over-and-over again.

If you’ve never been to the Birch Cove Lakes, you simply have to go. It’s an amazing wilderness only five kilometres from downtown, covered in forests and lakes and streams and lookoffs and hidden treasures. Halifax is lucky to have such a place close by. It’s like a national park, but close enough that it can be reached by public transit.

For me, it’s one of the reasons why I chose to move back to Halifax. I love it here. It’s a great city and when I want to escape to the woods or go for a paddle or a swim, the Birch Cove Lakes are right there.

This rugged land has been proposed as a regional park as far back as the 1970s, probably longer. After amalgamation, it was included in the HRM regional plan in 2006 as a future park. A cynic might point out that the city seems to have no problem acquiring lands to widen a road, but when it comes to the Birch Cove Lakes, it always seems to drop-the-ball. That criticism is fair, I think, but I also know there are good intentions at City Hall to fulfill the vision for the Birch Cove Lakes. Much of the internal wrangling within government is likely about determining the value of the land, how much the city is prepared to pay, and when specifically to acquire the properties.

Regardless, more than enough time has passed for the municipality to have at least acquired a handful of properties for the regional park, at a minimum. Several properties within the Birch Cove Lakes area have changed hands over the past 10 years, which means that at some point since the regional park was proposed, there were willing buyers and sellers, but the municipality didn’t capitalize on those opportunities.

At the Halifax Regional Council meeting last fall, where the development proposal for the Birch Cove Lakes was ultimately turned down, council reaffirmed its commitment to the regional park, and also directed city staff to negotiate land acquisitions and report back on progress in six months. That deadline is early March, and is fast approaching. I’m sure the city will want to show some tangible results by that date, and not just provide more excuses.

So, here are a few suggestions on how the municipality can finally make good on its promise to protect the Birch Cove Lakes as a regional park: 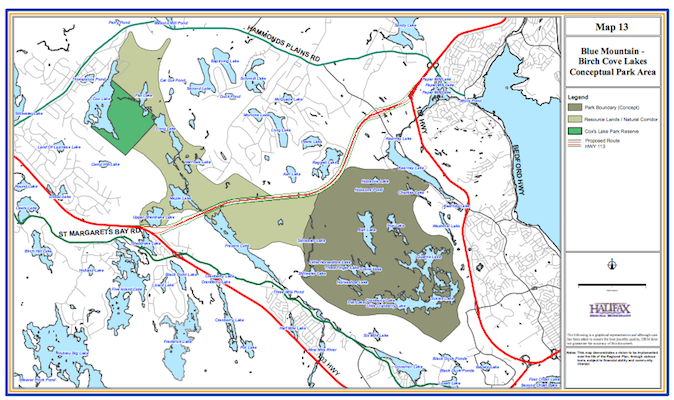 The wilderness park as envisioned by the city’s 2006 Regional Plan.

People who are saving up for a large purchase, such as a down payment on a first house or condo, would typically start planning for that purchase years in advance. The municipality should do the same for the Birch Cove Lakes, to spread the costs of the land acquisition over several years rather than having to deal with it all at once. Putting real dollars into such a fund would also help give the public confidence that the regional park proposal is a real investment for the city, and not just lines on a map that look good.

If the city government had set up such a fund in 2006, when it built the concept of the regional park into the HRM regional plan, and allocated, say, $1 million per year toward the land acquisition, there would now be a fund of $10 million (plus interest) to support the required land purchases for the Birch Cove Lakes. Having such a fund would also create opportunities for other levels of government to make financial contributions to support the land acquisitions, particularly the federal government, which has shown an interest in investing in sustainable infrastructure (see next point). Without such a fund, those dollars are going to be spent elsewhere, on things like highway overpasses.

2. Engage other levels of government 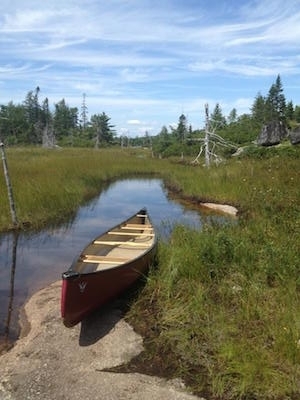 The provincial government has shown a tremendous interest in protecting Blue Mountain – Birch Cove Lakes by declaring all of the public lands there as a legally protected wilderness area, initially in 2009 and then expanding that protection in 2015.

During the most recent roller coaster that led to the Halifax Regional Council decision to reject the development proposal for the Birch Cove Lakes, the provincial Minister of Environment wrote City Hall to make it clear that the provincial government supports the park and wants the city to follow through on its commitments.

The MLA for the area, Diana Whalen, has been a long-time proponent of the regional park and similarly raised concerns about the development proposal ahead of the Halifax Regional Council decision.

As with the provincial government, there is also a role for the federal government to play in protecting the Birch Cove Lakes. The regional park is clearly critical green infrastructure for the city and the feds should free up the necessary resources to help the municipality acquire those front-country lands for the park.

There is also a piece of federal legislation administered by Parks Canada that is designed specifically for the protection of near-urban wilderness, which might be applicable for the Birch Cove Lakes. When Rouge Urban National Park was created in Toronto recently, it came with a federal investment of almost $100 million.

3. Talk to all the landowners 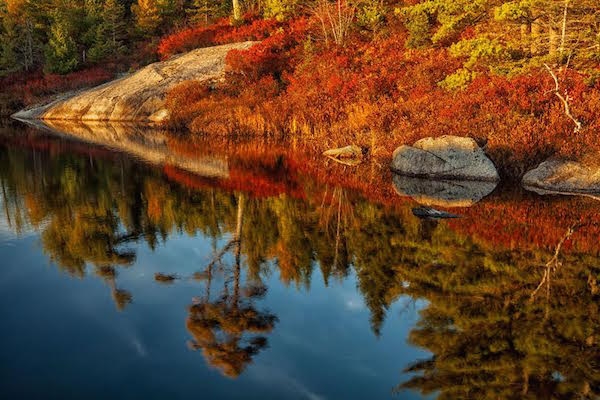 The land negotiations that failed last year, as far as I can tell, only involved two companies. Albeit, these two companies maintain land holdings in some of the most crucial areas of the Birch Cove Lakes (e.g. shorelines of Susies Lake, Quarry Lake, and Fox Lake) and the portion of the future regional park nearest the urban core, there are several other landowners who maintain important properties as well.

During the debate at Halifax Regional Council last year, Councillor Tim Outhit indicated that at least one of those other landowners might be interested in selling their land to the municipality. City staff should pursue that potential opening, as well as approach other landowners. That’s where the best opportunity will likely be for the city to make its first land purchase for the Birch Cove Lakes Regional Park, hopefully in time for the six month reporting deadline to Regional Council in March.

4. Be creative with the deal making

Development of land within the proposed park boundaries as envisioned in a video commissioned by the Annapolis Group.

Much of the debate internally at City Hall, I suspect, is around how much the municipality is prepared to pay to acquire these private lands to create the regional park. That’s prudent, and necessary.

However, I would hope that city staff who are involved in these negotiations are not limiting themselves just to an outright land purchase. There are other ways to acquire lands for the regional park, not least of which would be through strategic land trades.

The municipality and the provincial government own several properties within the urban core of the city where development is to be encouraged (e.g. Cogswell Interchange redevelopment; former St. Pats lands, etc.). This creates an opportunity for the city to acquire lands at the Birch Cove Lakes for the regional park in exchange for land already earmarked for development (and where it fits within the context of the HRM regional plan). This could be a win-win scenario, if done right.

The municipality also has other developmental tools at its disposal that could help with acquiring land for the regional park, such as density bonusing credits where a landowner may receive an approval from the city to add a couple floors to a building in the urban core in exchange for transferring land to the city for the Birch Cove Lakes Regional Park. There are other tools as well.

In reality, a successful land acquisition for Birch Cove Lakes will likely involve several of these options, not any particular one. My advice here for the city would be to consider the full range of tools and levers that are available, and not just approach this as one major land purchase in one particular fiscal year.

Seize opportunities when they arise. As properties come available for purchase within the Birch Cove Lakes (as has occurred several times over the past10 years), the municipality needs to move quickly and make offers on those properties.

It seems simple enough, but governments are notoriously slow at responding to such opportunities. If the municipality had acquired some of the parcels for the regional park 10 years ago, it would have done so at considerably less cost than what the same parcels are likely worth today, since the price of land generally goes up over time.

If the municipality waits another 10 years before acquiring a property for the regional park, it will become that much more expensive again.

6. Make a stronger case for the park

Too often the debate at City Hall is about land-use planning, bylaws, and zoning. I understand that this is a necessity, and the policy wonk in me actually enjoys it, but it’s easy for people’s eyes to glaze over during such debates and to lose sight of the bigger picture.

The benefits of the Birch Cove Lakes to the future Halifax are immense. If we succeed in establishing the regional park, future residents of this city will have easy access to genuine wilderness right in the heart of the city, where they can experience nature, go for a paddle, spend time with family and loved ones, have a summer picnic on the shores of a beautiful lake, go for a winter skate, meet people who enjoy being outside, exercise, or just relax and contemplate the world. This is in addition to the benefits of clean air and water, protecting habitat, storing carbon, and controlling expensive sprawl.

The opportunities are almost endless, but only if the city is successful in bringing this land into public ownership, so it is available to all, and not just a select few. Otherwise, this precious natural area with all its potential for the city, will likely just become same old, same old, suburbia. And that really would be quite unacceptable. 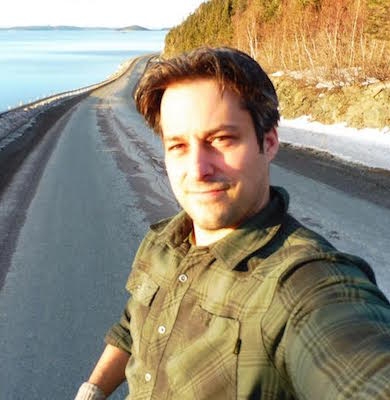 Chris Miller is the National Conservation Biologist for the Canadian Parks and Wilderness Society. He has worked to protect the Birch Cove Lakes for 20 years and wants future Haligonians to be able to enjoy this amazing place.